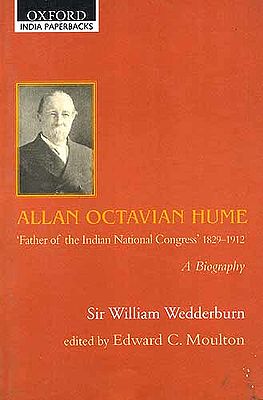 $29.00
Usually ships in 15 days
Notify me when this item is available
Save to Wishlist Send as E-card Share by Email
About the Book:

Allan Octavian Hume (1829-1912) is best known for his key role in the creation and early development of the Indian National Congress, but he also had a long and a controversial role in the Indian Civil Service (ICS). The only biography of him is a brief memoir written by his like-minded compatriot, Sir William Wedderburn, published in 1913. After years of original research on Hume's life in India, Edward Moulton, in this critical re-edition, presents for the first time an incisive and comprehensive appraisal of Wedderburn's biography.

The special relationship between Wedderburn and Hume was grounded in their liberal critique of the British Raj, consolidated by their mutual identification with India's new educated classes and anchored in their strong public commitment to Indian nationalism.

This re-edition will be of particular interest to students and academics in modern South Asian history and politics and the members of the general public who share a general interest in these fields.

William Wedderburn, the author, was a member of the Indian Civil Services (ICS) and British MP (1893-1900). He was associated with the Indian National Congress from its inception and became its president twice, in 1889 and 1910.

Edward C. Moulton is Professor of History at the University of Manitoba, Winnipeg, Canada.