THE AVESTAN A HISTORICAL AND COMPARATIVE GRAMMAR (A Rare Book) 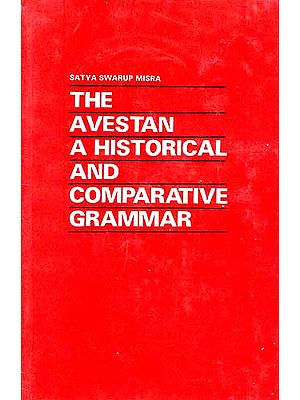 $52.00
Notify me when this item is available
Save to Wishlist Send as E-card Share by Email

In the present work, Dr. Misra, presents a systematic, comprehensive and explicit picture of the history of the Avetan language, with suitable cognates from various indo-European historical languages, like Old Persian, Sanskrit, & Greek etc. The development of the language from indo-European through Indo-Iranian & Old Iranian to Avestan is presented in such a clear and systematic manner that the work is of great use to both scholars as well as beginners.

"In Phonology the work presents several tables for illustrating the complicated treatment of several Avestan sounds like a, a, s etc., showing perfect classification of the situation for the variant treatments. Treatment of sounds are also briefly presented in the reverse order (viz. Avestan-Indo-Iranian-Indo-European) to help beginners & researchers. In Morphology the declensions & conjugations have always been presented in the tables, which include cognotes & explanations, thus avoiding the foot-note system." (vide Preface).

"The impact and implication of the work of Dr. Misra will be far-flung, not only on account of its up-to-date up-grading, but for its being the first-ever Historico-comparative Grammar of Avestan in the real sense of the nomenclature as well, peruse for instance the array of reconstruction, Indo-European, Indo-Iranian & Old Iranian, assembled together and furnished in an adequate supply, thus marshalling with a fuller comparative evidence." (vide Foreword).

Dr. Satya Swarup Misra, the recepient of the coveted Asutosh Mukherji Gold Medal from the University of Calcutta, which proved a crowing success to his budding scholarship, by now, needs no introduction to his confreres in the field of his choice through his tireless and prolific contributions, both wide ranging and worh-while like Comparative Grammar of Sanskrit, Greek and Hittite, New Lights on Indo-European Comparative Grammar, Laryngeal Theory, A Critical Evaluation. In the present treatise he, with his wonted lucidity, has given a vivid description by way of a thumb-nail sketch a meticulous execution in every detail, a comprehensive coverage of the history of the Avestan lore. (vide Foreword).