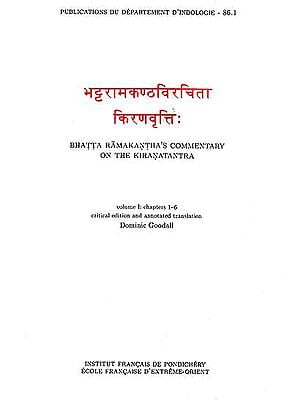 $75.00
Usually ships in 15 days
Notify me when this item is available
Save to Wishlist Send as E-card Share by Email
Preface

Though firmly convinced myself of the interest of this text, it is pleas-;:;t to be assured that an edition of it will meet some need, and so I as encouraged by rereading, while still in the throes of proof-reading and compiling the index, the following envoi to Brunner’s analysis of the kirana (1965:327):

The Last thirty years have seen a spate of publications concerning them- selves with the Saiva Siddhanta, but this area of studies can still scarcely be called fashionable: indeed the majority of the demonstrably early tantras if the school have not been published. That the early literature is still largely uncharted means that a reader can enjoy the excitement of the discovery of its development at first hand, not mediated through unsatisfactory works} Moreover it is not only in the discovery of the scripture that this pioneering thrill can be enjoyed; this book concerns the thought of one of the most influential thinkers of the Saiva Siddhanta. Ramakantha II shaped and systematized many of its ideas in difficult, but when grasped, satisfyingly rigorous works of sastra. Although his inter-pretations of doctrine were widely adopted by later writers of the Saiva Siddhanta, and although his vigorous and elegant Sanskrit prose works show him to have been unusually learned and clear—thinking, even by the standards of his (exceptional) milieu, there are, to my knowledge, no translations into European languages or studies of his works (with the one exception of the twenty—five verse Nadakarika).

Furthermore there is no tradition of teaching reaching to modern times that has transmitted and expounded the doctrines of the classical Saiva Siddhanta formulated by Ramakantha II. The Tamil—speaking South is the only area of India in which the Saiva Siddhanta still thrives, and here Ramakantha II’s influence appears gradually to have waned. South Indian thinkers fell under two powerful theological influences that have altered fundamentally the character of the Saiva Siddhanta: that of devotional-ism and that of Vedantic Advaita. Neo—Saiddhantik as continued to quote Ramakantha’s ingenious interpretations of particular passages and points of doctrine (such as the concept of karmasamya or iruvinaioppu); but they no longer upheld his tenets on such fundamental issues as the nature of liberation or the workings and implications of initiation. Six centuries after Ramakantha II one thinker, Salivatinivasi Janaprakasaguru of Sri Lanka, attempted to reinstate much of the old Saiddhantika theology of the Kashmirians; but he had to battle hard to present this as consistent with a body of more recent acknowledged scriptures that had since arisen to justify the new theology, and he came to be savagely attacked, in particular for defending the old doctrine (now heresy) that the liberated soul became identical to—while remaining separate from (as opposed to identical with and so merged in)—Siva (sivasamyavada).

Largely forgotten in Kashmir, Ramakantha’s works gradually ceased to be copied in South India too. Thus of the once much quoted Kirana-Vrtti only four lacunose manuscripts appear to survive and there is, as far as I am aware, no modern Saiddhantika scholar well-versed in its teachings, What follows by way of an edition and translation of Bhatta Ramakantha II’s Kiranavrtti is therefore by no means the final word on*3.2 text. It is not only incomplete (only six out of the twelve chapters appear here); it is full of difficulties that may only be resolved (if at all) after further reflection and a great deal more reading, not only of the other works of Bhatta Ramakantha II, of his Kashmirian contemporaries and of other Saiddhantikas, but also of the extant early Siddhantas, so few: of which are published.

My introduction is long, but it has much hitherto unpublished information to present that helps to set the Kirana and the Kiranavrtti in a con-' etc; The introduction first presents new evidence that I have come across;; Sgt Ramakantha II’s spiritual lineage (a solitary manuscript of the workif 3 previously unknown disciple), about his oeuvre (Ramakantha II’s extent works are here arranged in a plausible order of composition, and references to lost works are discussed), about where and when he wrote, and about an influential theological innovation of his expounded in the Kiranavrtti (his resolution of the problem of two conflicting doctrines concerning divine grace). The introduction next attempts to establish which among the many Siddhantas surviving can be proved to be early. I airing the limits of the early canon is necessary because fundamental Changes within the Saiva Siddhanta evidently did not just effect post-scriptural exegetes: tantras of the Saiva Siddhanta were modified, added to or wholly rewritten, often retaining the names of ancient works. After drawing up the small list of extant Siddhantas (most of them as yet unpublished ) that can be proved to predate Ramakantha II, the introduction discusses certain features of their structure, language, and doctrine, with view to attempting a relative chronology of the early canon and locating the Kirsana within it. There follow descriptions of the sources used and methods followed for the constitution of the text.

An edition and translation of the first three out of the six chapters of the Kiranavrtti here presented was submitted as a doctoral thesis at the University of Oxford in November 1995. That thesis, from which this book has expanded, could not have been achieved without an enormous amount of help, Before all others I should like to thank four people in particular: my supervisor, Professor Alexis Sanderson, Spalding Professor of Eastern Religions and Ethics at All Souls College, Oxford, who has been unfailingly generous both with his scant time and with his vast knowledge; Dr. Harunaga Isaacson, who from start to finish has helped and encourage din every way possible and been a tireless proof-reader (though few are marked, his corrections—of major as well as minor flaws—pervade every part of the book); Dr. Jurgen Hanneder, my friend and fellow student of Saivism, whose stimulating company I enormously enjoyed while he was in England editing the Malinivijayavartitka; and Dr. Francois Grimal of the Ecole francaise d’Extreme—Orient, for his remarkable generosity and kindness to me over the last years and because he suggested to me that I study as an allocataire de recherché at the French Institute of Pondicherry, which, apart from its other merits, houses the greatest collection of Saiddhantika manuscripts in the world.

My doctoral studies at Wolfson college in Oxford (1992-95) were financed by a British Academy Award before which I had the great privilege of spending two less focused years (1990-92) attending lectures on a wide variety of ideological subjects at the University of Hamburg as a Hanseatic Scholar of the Stiftung Freiherr von Stein. An allocation de recherché fromt eh French institute of Pondichery as enabled me to prepare this book for publication.