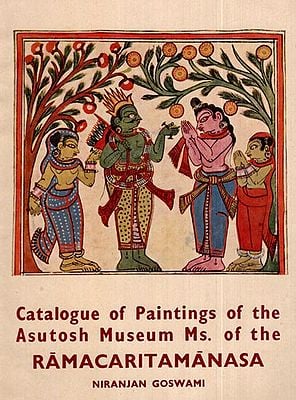 Catalogue of Paintings of The Asutosh Museum Ms. Of the Ramacaritamanasa (An Old and Rare Book)

It is generally believed, and perhaps not without diffidence, that the eighteenth century India offers a poor foil to the spectacular artistic achievements of the centuries immediately preceding it.

It is generally believed, and perhaps not without diffidence, that the eighteenth century India offers a poor foil to the spectacular artistic achievements of the centuries immediately preceding it. But the actual contribution of the age to the content of art by any measure is not small and is far from being lack-lustre or inconsequential. The documentation of materials that put on record the creative and artistic sensibilities of the period is, however, at an initial stage. The illustrated manuscript of the Ramacaritamanasa executed between 1772-75, now in the collection of the Asutosh Museum of Indian Art, assumes an important historical bearing against this perspective. The excellent text, itself an outstanding literary production of the sixteenth century, is embellished with as many as 153 (or more ?) illustrations. Rāni Jānaki of the Mahisadal Raj Estate who provided the necessary support for the consummation of the task of copying and illustrating the voluminous text, was one among many of the landed aristocracy similarly upholding the creative ardour of their own time. The paintings may not permit a comparison in richness of colour, precision of details and varied repertoire of motifs, with the courtly painting tradition of the Mughal era, which in any case was on the wane in the eighteenth century. Nevertheless, these are not lacking in vigour but positively maintain a high standard of originality, vividness and efficiency in execution, thus affording illuminating evidence in regard to the trends and tendencies of the contemporary art movement.

The “Catalogue of Paintings of the Asutosh Museum Ms. of the Rāmacaritámānasa” is the first in the series of comprehensive catalogues on the collections of this Museum which are intended to be published in a systematic order with the financial assistance made available by the Department of Education, Government of India. In this connection, I am beholden to Dr. (Mrs.) Kapila Vatsyayana, Joint Educational Adviser, Department of Culture, Government of India, who has always evinced a keen interest in the progress of the work.

A few words may be added in respect of the arrangement of plates in the Catalogue. For the sake of convenience of the publication, all the multi-colour reproductions have been brought together and arranged on one side. This has caused some disturbance to the original sequence of illustrations in the manuscript. The consequent confusion may be overcome in the following manner : Pl. II is to be read with Pl. XIXa &c. ; Pl. III with Pl. XXa &c. ; Pl. VI with Pl. XXVa &c. ; Pl. VIIb with Pl. XXVIIIb ; Pl. VIIIa with Pl. XXXIIIb &c. ;

I would like to seize upon this opportunity to express my profound feeling of gratitude to Professor R. K. Poddar, Vice-Chancellor, Calcutta University, who had taken a keen personal interest in the progress of the work. My sincere thanks are due also to Professor D. B. Dutta, Pro-Vice-Chancellor for Academic Affairs, and Shri Arun Ray, Pro-Vice-Chancellor for Business Affairs and Finance. Not only did they encourage me by their advice and suggestions, they had also facilitated the publication of the work in many ways. Dr. B. N. Mukherji, Charmichael Professor, Calcutta University, had graciously agreed to write the foreword of the Catalogue. I owe a debt of gratitude to him. I owe grateful thanks to Dr. Asok K. Bhattacharya of the Department of Ancient Indian History and Culture, and Shri Pran Krishna Pal, Ar Museum of Indian Art. I had the privilege of exchanging views and holding many sessions of fruitful discussions with both of them. Shri N. B. Bannerji, Assistant Inspector of Colleges, Calcutta University, took upon himself the painstaking task of reading the manuscript and making valuable suggestions. I feel specially thankful to him for this act of kindness. Members of staff of the Museum extended whole-hearted co-operation in different fields such as typing, taking measurements of illustrations, preparation of photographic prints and sundry others. I am specially indebted to them. Lastly, my thanks are due to Messrs. K. P. Basu Printing Works, Standard Photo Engraving, Radiant Process and New Prima Press for the care and interest with which they executed the printing of the text, preparation of blocks and printing of blocks respectively.

Painting is an important medium of creative art. Unfortunately dated evidence of this form of creative activity in Radha (the area of which is now in West Bengal) during the late mediaeval or early modern age is very rare. Here lies the importance of the dated illustrated manuscript of the Ramacaritamanasa, prepared at Mahishādala (now in the Midnapore district of West Bengal) in the second half of the 18th century. Different sections of the manuscript (which has not been recovered in full) bear different dates like the years 1694, 1696 and 1697 of the Saka Era, i.e., A.D. 1772-73, 1774-75 and 1775-76 respectively. Folio-sized sheets of European-made paper, used for this manuscript, display numerous miniature paintings. Their evidence testifies to the existence of an indigenous school of painting in the area concerned in the late 18th century A.D.

In this connection we can refer to another illustrated paper manuscript of the Sanskrit work Bhagavata-Mahapurana, dated in Saka 1611 (indvindu shashțhendu mite Sakāvde), i.e., in A.D. 1689-90. This manuscript, noticed by Prof. S. K. Saraswati, is written in Bengali characters on country-made paper. It consists of 203 leaves (measuring 35 cm. x 115 cm.). Nearly half of the leaves bear figural representations of various episodes of Krishṇa's life as described in the Bhagavata. “The paintings are in a simple and naive style, showing an economy in linear as well as colour treatment.” Numerous leaves of this manuscript also display floral, vegetal and other motifs (Journal of the Asiatic Society, 1974, vol. XVI, nos. 1-4, p. 142).

• These two illustrated manuscripts are two dated documents of indigenous painting in the 17th and 18th centuries A.D. Sheets of paper utilised for painting in both the manuscripts are unprimed or unburnished. (“A feeble attempt to priming in white is found in cases of three” out of all the known illustrations in the Ramacaritamanasa manuscript). The colours used for painting were apparently made of indigenous ingredients. There are certain stylistic similarities between the treatments of physical features of human figures in illustrations in both the manuscripts. For examples, we can refer to the elongated lower portion of the body, thick hair, peculiar formation of toes (curved unusually downwards), etc. Faces in these illustrations are shown in profile. There is no emphasis on anatomical details. The pictures in the Bhagavata manuscript and the majority of the paintings in Ramacaritamanasa manuscript have blank background.

These similarities, however, do not minimise certain points of apparent disagreement between the styles of painting betrayed by these two manuscripts, separated from each other by nearly a century. Nevertheless, the points of similarity between them are so obvious and numerous that the paintings in both these manuscripts may be considered to belong broadly to one and the same indigenous tradition. All of them are at least partly inspired by a folk art tradition.

The paintings concerned have certain features noticeable in later indigenous style (or styles) of painting in the territory now included in West Bengal during the 19th and the early 20th centuries. For an example, we can refer to the Kalighat style of painting. The Kalighat pictures are on unprimed or unburnished sheets of paper. They have generally blank background.

However, sometimes in Kalighat painting the outside surroundings are indicated b patch of horizontally drawn dark colour at the bottom of the picture, suggesting a road. The setting inside a house is at times alluded to by drawing a part of a curtain in the upper portion of the picture. The latter feature is noticeable in several illustrations of the Ramacaritamānasa manuscript. These observations, however, never suggest any cognate relationship between the Kalighat style and that indicated by our paintings.

It appears from the above discussion that the importance of the two above noted manuscripts can be hardly over-estimated for reconstructing the history of indigenous painting in the region now included in West Bengal. The art historians and art lovers are, therefore, thankful to the authorities of the University of Calcutta for arranging for the publication of a catalogue of illustrations appearing in the Ramacaritamanasa manuscript, which is now in the collection of the Asutosh Museum of Indian Art.

The catalogue has been ably prepared by Dr. N. Goswami, the Curator of the Asutosh Museum of Indian Art, University of Calcutta. In an illuminating introduction to the catalogue he has discussed inter alia different features of the manuscript, its date, and technique and style of painting as indicated by the relevant illustrations. There are reasons to believe that the treatise will be considered by scholars as a standard work on an important aspect of indigenous painting of India. 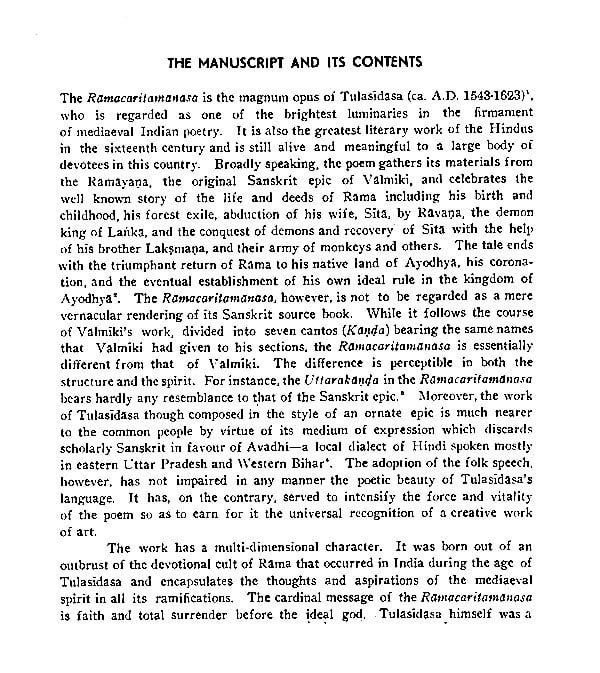 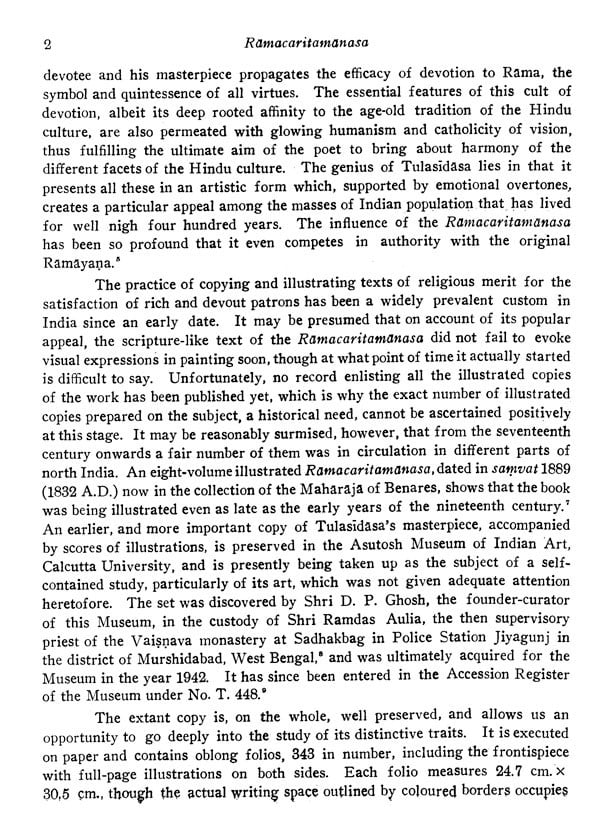 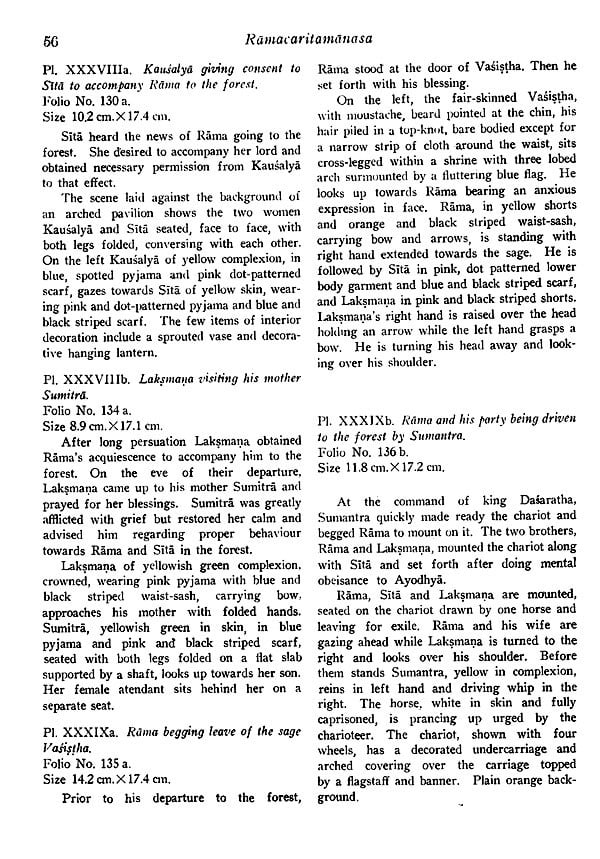 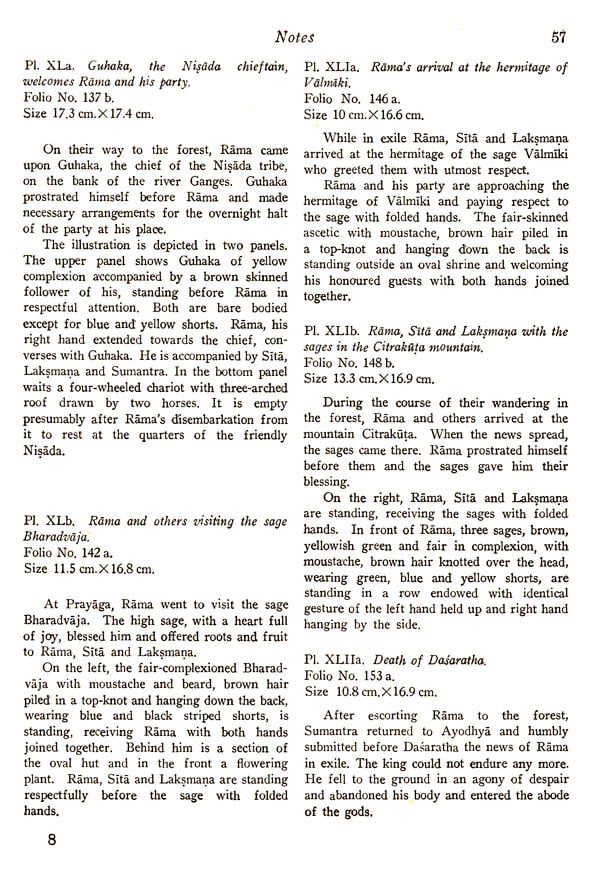 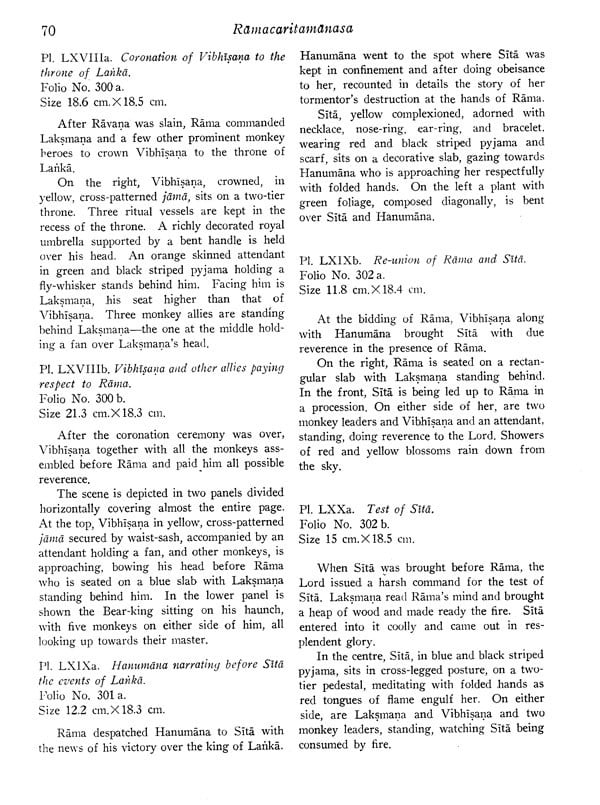 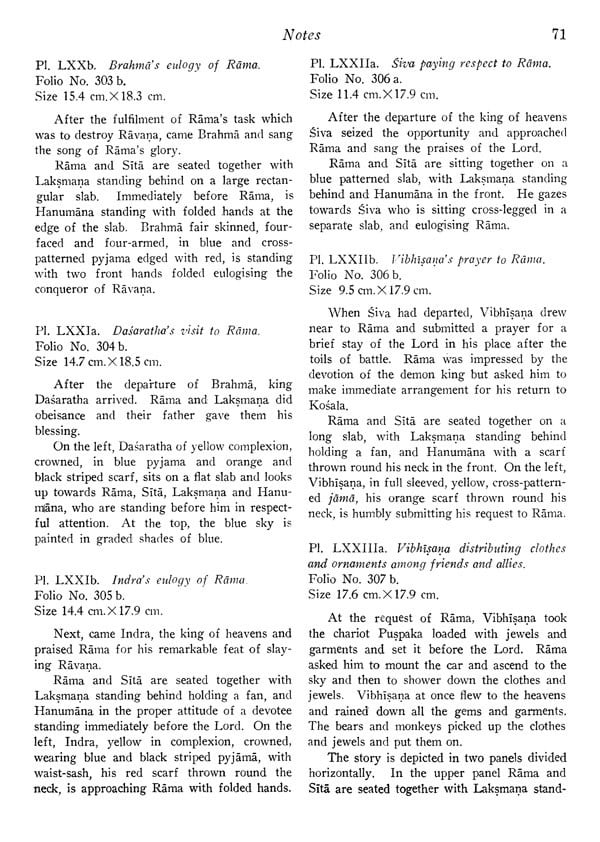 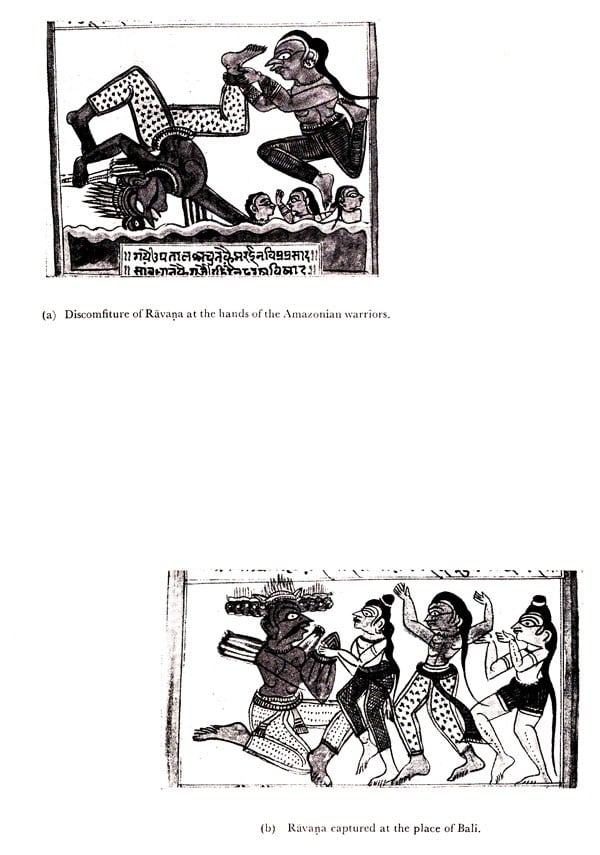 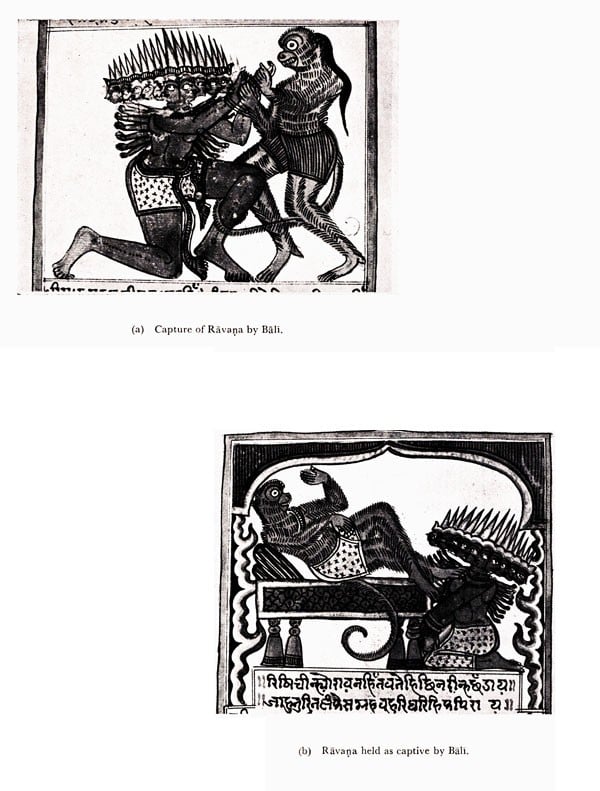