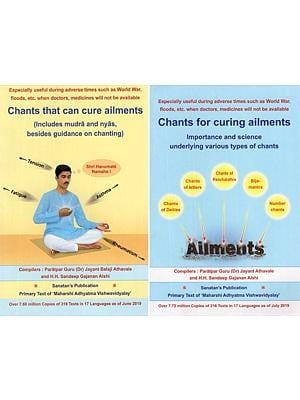 FREE Delivery
$42
Especially useful during adverse times such as World War, Floods, etc. When doctors, medicines will not be available
Quantity
Ships in 1-3 days
Notify me when this item is available
Introduction to the Compilers


4. Propounder of `Gurukrupayoga' for faster God-realisation: By performing spiritual practice as per `Gurukrupayoga', 105 seekers have become Saints and 1,222 seekers are progressing towards Sainthood as of 31.7.2019.


5. Unique creation and publication of Spiritual texts on various topics such as spiritual practice, protecting the Nation, bringing about awakening on Dharma (Details are provided in this Text)


6. Production of Audio CDs & VCDs that provide guidance on spiritual practice and education on Hindu Dharma


8. Research on spiritual remedies for physical, psychological distress and that caused by negative energies


9. Conducting research on the Divine changes in His own body, the objects used by Him and His own Mahamrutyuyoga


11. Research using scientific instruments on religious rituals and events that are beyond the comprehension of the intellect


14. Study of animals and plants from perspective of sattvikata


15. Research through Astrology and Nadijyotish


18. Missions that have commenced taking inspiration from Him


A. Hindu Janajagruti Samiti for establishing the 'Hindu Rashtra'


B. Hindu Vidhidnya Parishad - An organisation of advocates

Generally, Hindus know about chanting as a form of worship of the Deities, but they do not know about the usefulness of chanting Deities Names for treating ailments. In-depth research on the chanting of 'Omkar is being conducted in western countries such as in the USA and by chanting 'Omkar' many people in western countries are getting cured, but in India, Hindus are unaware of the effectiveness of chanting prescribed by their own Dharma. This is such a misfortune. Through the Spiritual text series 'Chant remedies', Hindus will be able to learn the importance of their Dharma and Deities.

Mostly the root cause of physical and psychological ailments in human beings has spiritual causes. To eliminate these causes, remedies at the spiritual level need to be performed. 'Chanting' is a very powerful remedy. Prarabdha, which is destiny that is experienced in this birth, is one of the major spiritual causes for problems in life. By chanting, the patient's mild destiny is completely overcome. If a patient has moderate destiny, it can be reduced by chanting. Even if a patient has severe destiny, by chanting the individual can obtain mental strength to face and endure that severe destiny.

‘Chanting’ is the easiest remedy for all. Chanting has no restrictions of space and time, purity and impurity or even correct pronunciation (as in the case of chanting a mantra). Chanting is not as difficult as performing Yoga or Yaga (Ritual of sacrificial fires). At times, medicinal herbs may not be available during adverse times, but the spiritual remedy of chanting can be done at anytime, anywhere.

Various types of chanting and the underlying science are mentioned in this Volume of the Spiritual text series. Knowing the underlying science of chanting will help in developing faith in it. In Kaliyug (The present era of strife), man has more faith in modern science than he has in Spirituality. The research conducted with the help of scientific instruments on chant remedies has also been provided in this Spiritual text. Through this, even intellectuals will be able to develop faith in chanting.

When Divine Rule (Hindu Nation) is established in the near future, knowledge of treatment given by using chants will be included in the syllabus of schools and colleges. Hence, the future generations will have easy solutions to reduce the distress arising out of ailments at a very young age.

We pray unto the Holy feet of Shri Guru and Shri Narayan - the protector of the universe – ‘May more and more people who are suffering be cured quickly by performing these chant remedies’.

This Volume of the Spiritual text series 'Chants for curing ailments' lists chants of some Deities and the various ailments for which they are helpful so that when the need arises, the correct chant is easily found. The reason for giving this information in this manner is - Everyone has strong faith in their Upasyadevata (Deity of worship) or spiritual practice of chants such as 'Om (3)'. If the Name of the Upasyadevata or the Name chanted as spiritual practice is to be chanted for curing ailments, it will help in curing the ailment faster if it is done with more faith.

Ailments are caused due to imbalance of one of the Panchatattva (Five Cosmic elements) in the human body, and to cure the ailment caused by the imbalance, it is useful to chant the Name associated with that Principle. Just as chants are useful in curing ailments, mudras and nyas too are useful in curing imbalance in Panchatattva. The spiritual remedies, where chanting is supported by making mudras and performing nyas, are more effective. Therefore, this Spiritual text in the Spiritual text series also provides information on the mudras and nyas.

We pray unto the Holy feet of Shri Guru and Shri Narayan - the protector of the universe – ‘May more and more suffering people be cured quickly by performing these chant remedies’. 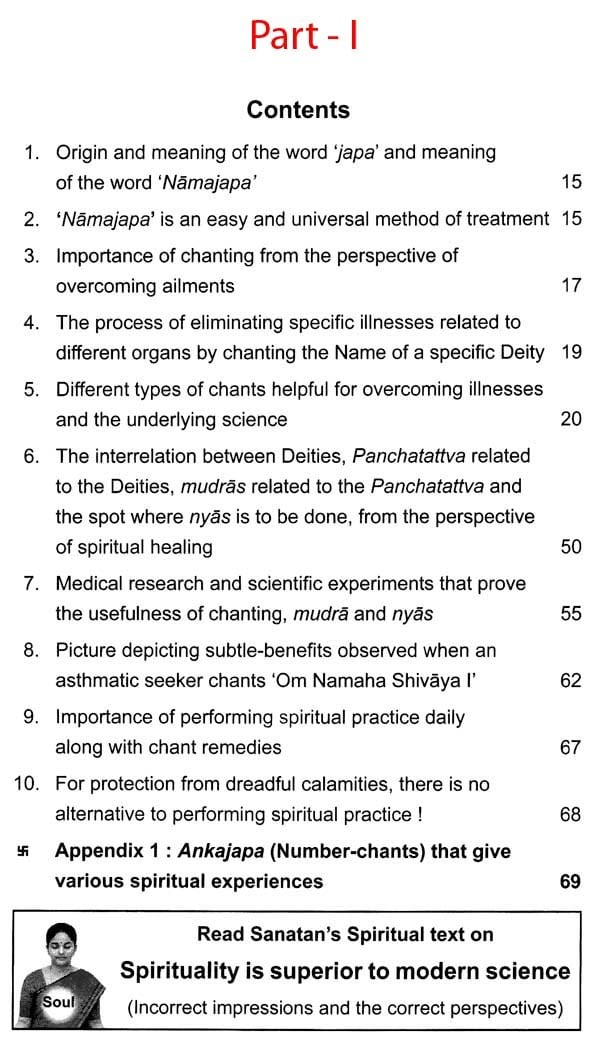 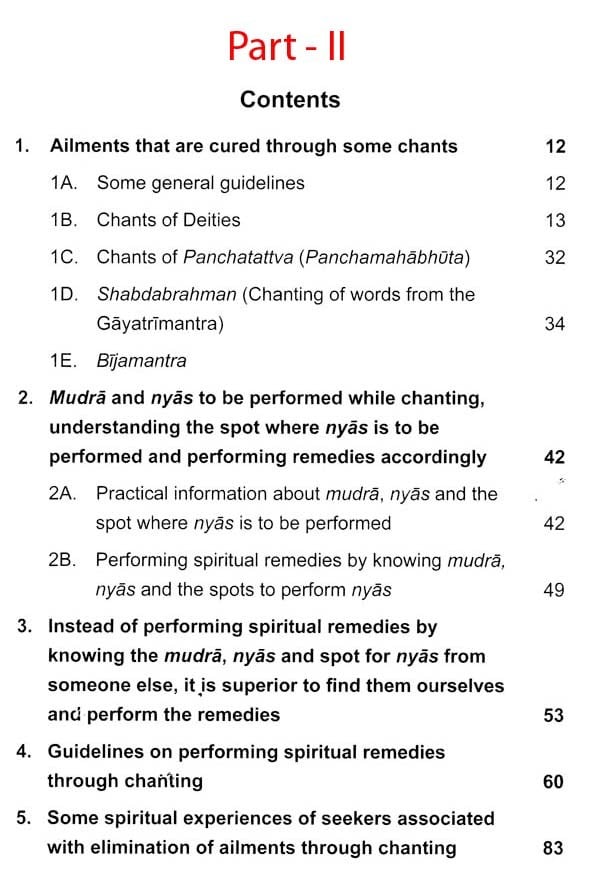 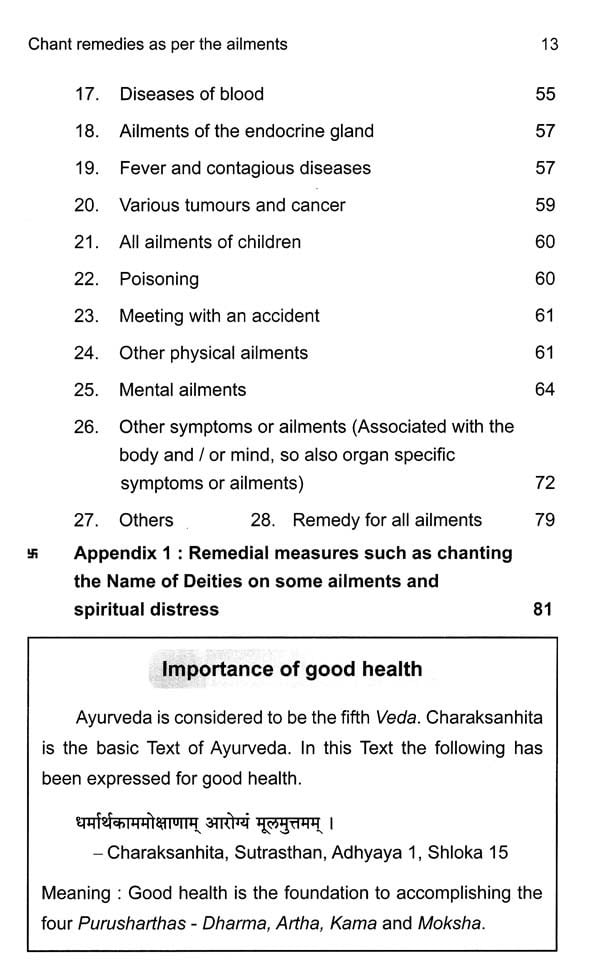 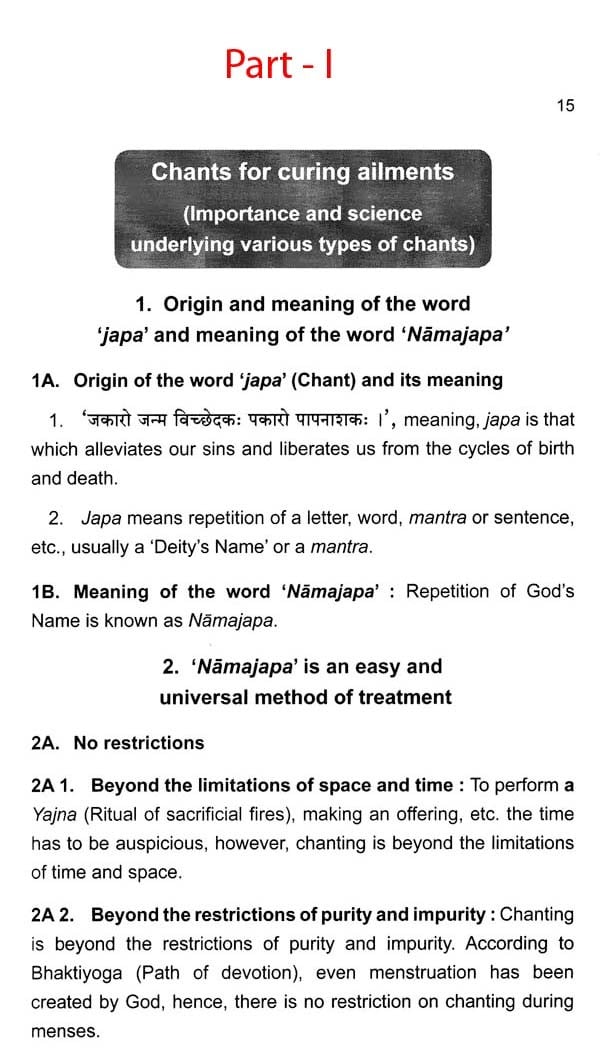 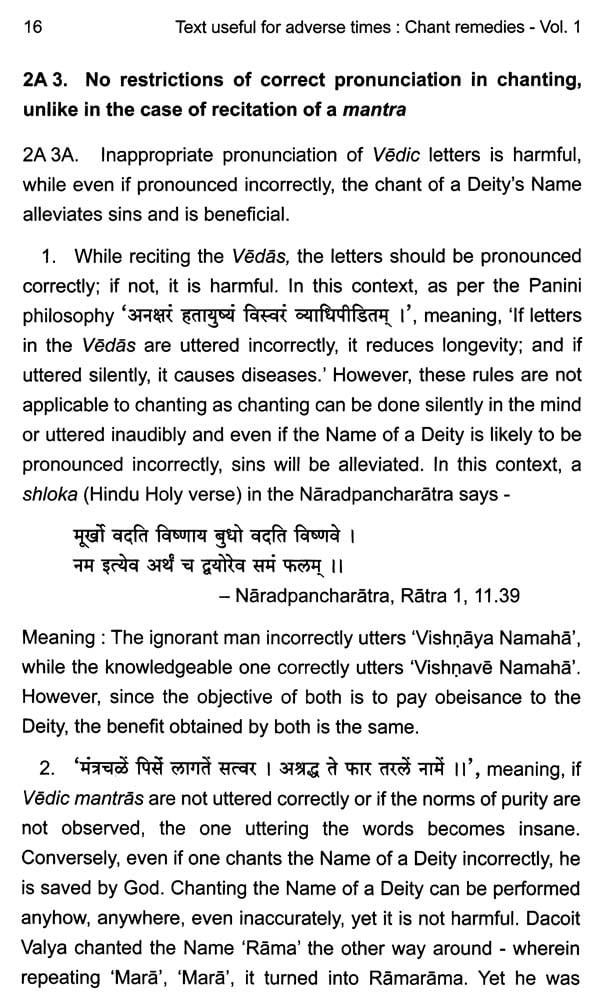 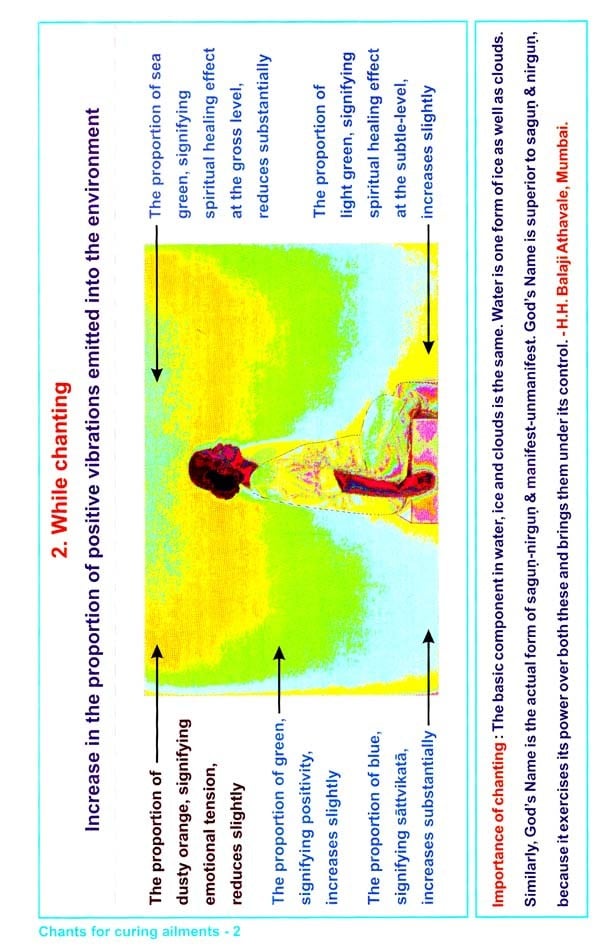 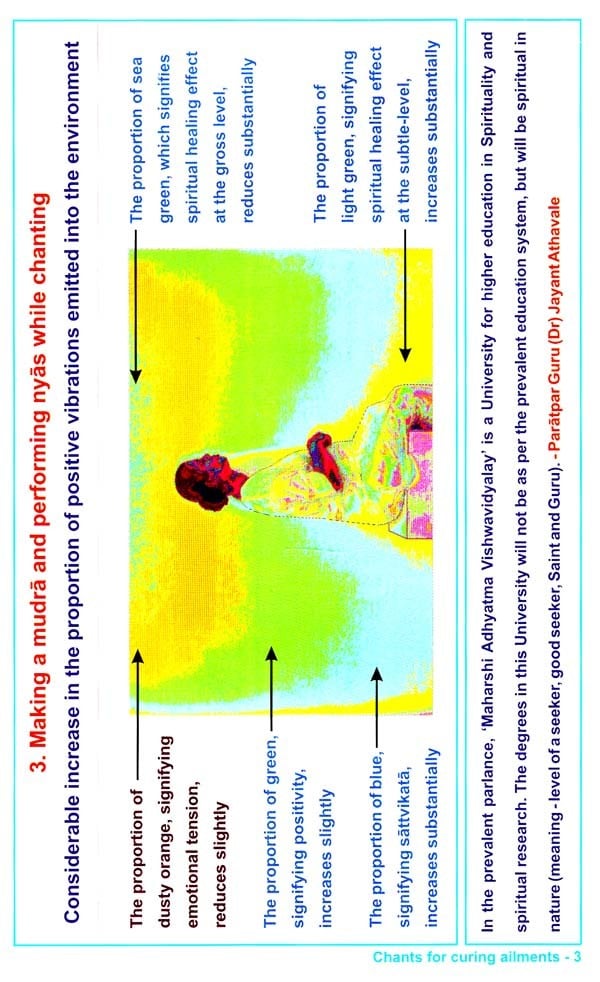 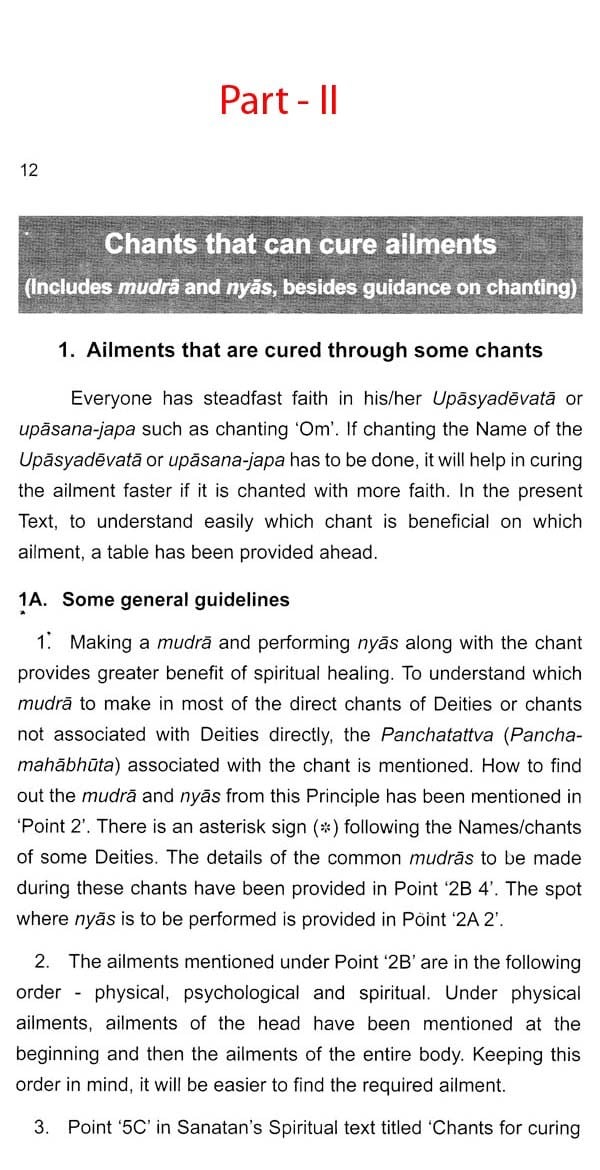 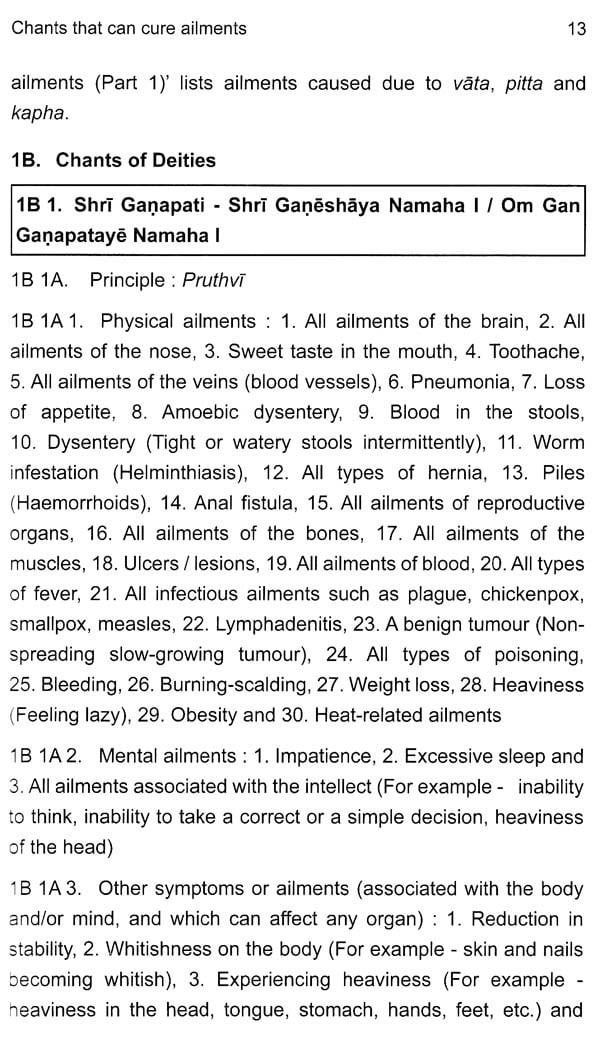 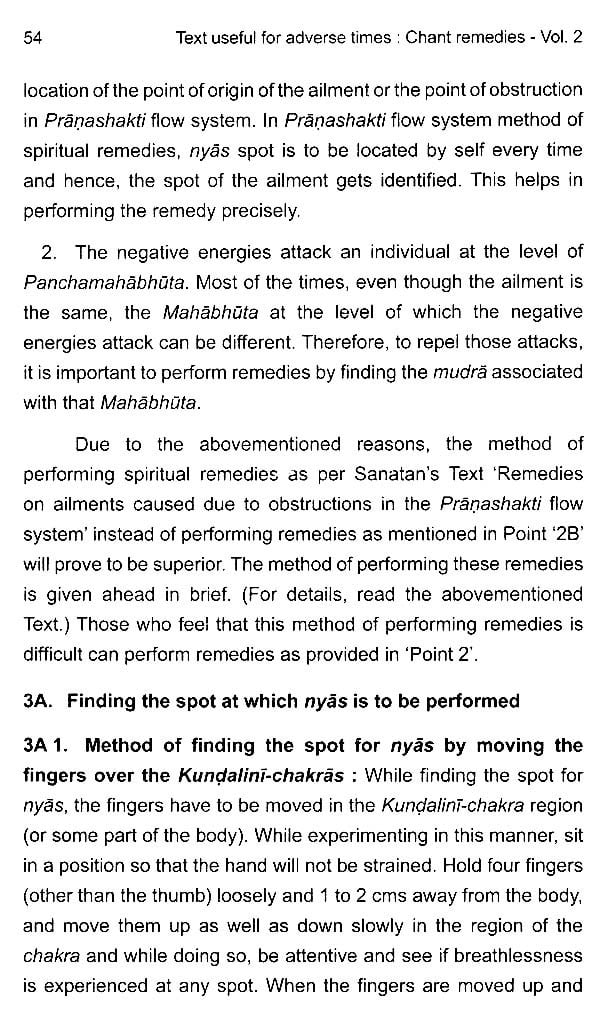 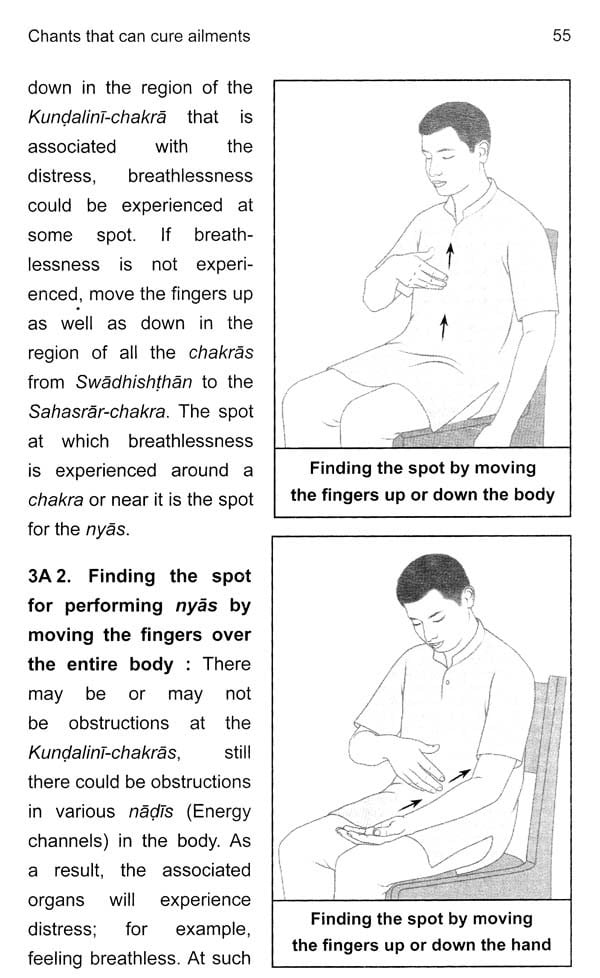