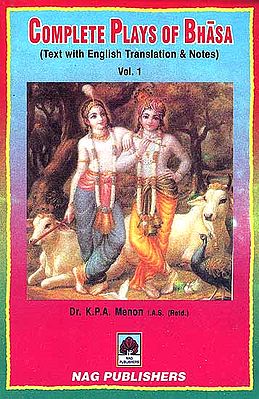 $85.00
Notify me when this item is available
Save to Wishlist Send as E-card Share by Email
About the Book (First Volume) :

This first volume of Bhasa's plays starts with Balacaritam which has got Krsnavatara as its theme and deals with the boyish adventures of Krsna ending with the slaying of Kamsa. The remaining six plays have drawn on different episodes of Mahabharata for their themes and could be generally classified as the Mahabharata Plays. Though the episodes have been taken from Vyasa's great epic or the Puranas dealing with Krsnavatara there have been deviations in their presentation and, in the case of the Mahabharata Plays, the characters are not always true to the type as depicted by Vyasa. Apart from this, there are some episodes that do not find any place in the epic and should be considered as inventions of the great dramatist for fulfilling his own objective. The confrontation of young Abhimanyu and Ghatotkaca with their parents without knowing their identity has no authority except of Bhasa but its effect on the stage is bound to be spectacular.

This second volume of Bhasa's plays deals with some of the important episodes of Ramayana starting with the disturbed coronation in the first play of 'Pratima' and ending with the consecration of Rama along with Sita in both cases. Though Bhasa has drawn upon Valmiki for the themes he has made various deviations and introduced his own innovations. Bharata gets intelligence of his father's demise when he comes across the statute installed in a hall at the outskirts of Ayodhya; hence, the title 'Statue' for the play. Similarly, Rama's consecration takes place, not at Ayodhya, but at Janasthana en route in one case and at Lanka itself in the other. Apart from Rama and Sita, it is Bharata in one case and Hanuman in the other who receive the focus of attention from the dramatist as he represents selected episodes on the stage. An attempt has also been made to exonerate Kaikeyi of the guilt that has stained her name in Valmiki's narrative.

This, the third volume of Bhasa's works starts with the twin plays or Pratijnayaugandharyam and Svapnavasavadattam centering round Udayana, the ruler of Vatsa kingdom who had become a legendary figure in Ujjayani as mentioned by Kalidasa. Though Svapana is a sequel to Pratijna, the two are treated as independent plays. King Udayana remains a powerful central character in both plays but he does not ever make his stage appearance in the Pratijna, which is dominated by the powerful personality of the minister Yaugandharayana.

Avimarakam is a play with certain mythological and supernatural elements in it, though there are references to many of the kingdoms of the later Rigvedic period. The incomplete play Carudattam contains the same theme as dealt with in Sudrakas' Mrcchakatikam. It seems to be the work of a mature age and could very well be the last one left incomplete.

Dr. K. P. A. Menon M. A. , L.L.B, Ph. D. is an eminent scholar, scientist and administrator who has held many important assignments in the government including the post of Defence Secretary to the Government of India. Epic poetry and dramas have been his special field of interest and he has also been making a study of classics produced in modern European languages like French, Spanish and Italian- languages with which je os fairly conversant. During the last three decades he has been making a deep study of Sanskrit literature produced in his home state of Kerala.

Honorary Fellow of the Biographical Academy of Commonwealth and recipient of various honours within and outside the country, his name figures among the intellectuals in the International Biographical Centre, Cambridge. He was given the Distinguished Leadership Award by the American Biographical institute Inc. in 1985 and the Albert Einstein Memorial medal in 1986. He is the first recipient of the Sahityanikasam award of the Kerala Sanskrit Academy.

Bhasa is perhaps the only poet in the history of our literature, who did not go into the oblivion inspite of his works being lost to the readers for centuries together. His works were not being read nor his plays being enacted anywhere in the country with the exception of the narrow coastal strip of the minds of Sanskrit scholars and litterateurs. Kalidasa had spoken about Bhasa's plays with great respect while making his comment-How could any one think about staging the drama of a living poet while he had access to the compositions of such great figures like Bhasa, Saumillaka and Kaviputra? This was the doubt expressed by the Stage Assistant in the prologue. Saumillaka, Kaviputra and many others about whom we get scattered references are no longer remembered today. They were forgotten centuries ago when their compositions ceased to be available to the readers and to the stage but the interest in Bhasa remained alive. It has been mentioned about Svapnavasavadattam that the play stood the test of fire. What was said about the drama could very well be said about the author as well. Bhasa has literally stood the test of fire and re-emerged with undiminished glory.