The Concept of Theft in Classical Hindu Law 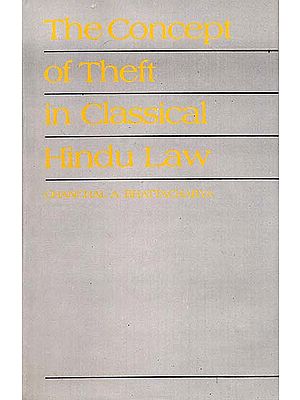 The Concept of Theft in Classical Hindu Law

Chanchal Bhattacharya sets out by analyzing the concept of theft and punishment in the classical Hindu law codes. He then presents an extensive selection of relevant texts and commentaries which not only elucidate the context, but also underscore the genius of the commentary literature. In the last portion of the book, the author provides his own translation and interpretation, which should prove invaluable to scholars. In cases where notable conflicts of opinion exist, the author has annotated reasons for his preference.

Readers will also find that he has broken new ground. His boldness in dealing with the difficult task of handling Kautilya's text and its different translations and interpretations is especially noteworthy. This book should capture the scholarly imagination of anyone interested in the very fundamental of Hindu jurisprudence.

Born in Calcutta (1942), Chanchal A. Bhattacharya was nurtured in an environment that has produced some of the traditional schools of Sanskritic learning. He received his B.A. from Calcutta University, majoring in Mental and Moral Philosophy, with a minor in Sanskrit. He has studied Christian theology with the Oxford Mission Fathers in Calcutta, while continuing his studies with the Pundits, both in Calcutta and Varanasi.

In 1973 he emigrated to the U.S.A., served in the U.S. army, and was honourably discharged. He holds a Master's degree in Religious Education from Fairfield University, a Master of Arts in Religion from the Divinity School of Yale University, and a Master of Philosophy from Columbia University. He is a fellow of the Royal Asiatic Society in the U.K.