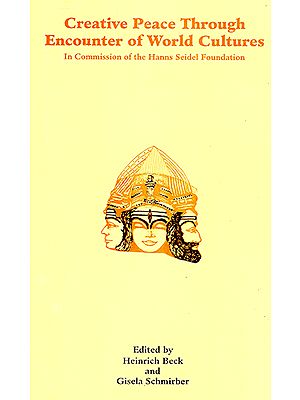 $39.00
Notify me when this item is available
Save to Wishlist Send as E-card Share by Email
About the Book

This Publication originated from a project with the same name pursued by the Chair of Philosophy I at the University of Bamberg in collaboration with the Hanns Seidel Foundation. The aim of the project is to elucidate by the means of philosophical reflection the spiritual and religious foundations which have formed cultures till today. Thereby the perception of one’s own identity as well as of the other may be promoted, thus encouraging mutual appreciation and innovative intercultural cooperation as basis for a humanely creative peace. The present volume establishes an exchange of ideas between representatives of different fields and world religions. A "philosophical exposition" (H. Beck) explains the value of the treatises "on the general problem of intercultural encounter and world peace" and of the contributions by specific regional cultures (Europe - Africa - Asia- [Latin] America) to the "dialogue of world cultures"

Heinrich Beck is professor in ordinary of philosophy at the university of Bamberg. Gisela Schmirber is deputy director of the Academy for Politics and Contemporary History of the Hanns Seidel Foundation.

The Hans Seidel Foundation’s international work pursues two objectives which are correlated in many ways: The fostering of international attitudes and understanding between the people-sand, where-ever it appears necessary and possible, the development of humane living conditions and stable, democratic, market-oriented societies. Both objectives we pursue in commitment to the values of our Christian and occidental world conception.

In practice the Hanns Seidel Foundation is engaged in establishing various international contacts on the pre-political, social and political sector and in the fields of science and media. These contacts enable a global exchange of opinions and information on questions of foreign and security policy and on cultural and foreign-trade issues. In the field of development cooperation the Hanns Seidel Foundation is presently managing 72 projects in 73 countries, covering mainly the social and social-political area. The projects are deseigen to activate self-help and to contribute to the creation of pre-political structures which are to strengthen the societies in the respective countries with regard to democracy and to promote the free and economically efficient development of the individual. Every year the Foundation reaches more than 200,000 people worldwide, who, in passing on the experiences gained in our seminars and conferences, are even multiplying and deepening their effectiveness.

In our opinion we will not reach our goals just by ""exportion" our own experiences and political concepts. What we must do is expounding our offer frankly. The concrete selection and the adaption of our contribution to the actual demand, however, can only take place in dialogue with our partners. This has to be based on the respect for the cultural and personal autonomy of our partners, but also in order to secure our achievements of increased peace, lieberty and economic development in the long term. Thereby we have to overcome not only factual but also personal differences. Differences can arise easily between Germany’s responsibility and interests in the world on the one hand and the individual course and ideas of our partners on the hand; and very often the obstacles to success are not of a factual but of a human nature. Therefore a constant dialogue with our partners is necessary in search for the best way into the future for all concerned. This presupposes tolerance and openness towards the opinions and needs of others, but at the same time the ability to keep to one’s own principles.

These considerations are to serve as a basis for the endeavour to pave the way to an understanding between those belonging to different cultures. This publication tries to forge links for a better understanding between the peoples. In a more indirect way it also supports the Hanns Seidel Foundation s practical efforts in setting up an agricultural trade association in Kenya or in strengthening the local and regional self-administration in Venezuela, just to name two examples which are also mentioned in this publication. In the end both aspects are equally indispensable: mutual knowledge as a basis for mutual understanding and the direct engagement on the spot with and for our partners throughout the world.

It is only fitting that, in the year of the 50" anniversary of the United Nations and the 200" anniversary of the publication of Kant's "Perpetual Peace" ("Zum Ewigen Frieden"), a slightly augmented, all-English version of Heinrich Beck's and Gisela Schmirber's publication - that has been available in a Ger- man/English and Spanish version: "Creative Peace through the Encounter of World Cultures" - should appear, and that it should be published in India.

The book assembles a number of contributions to the idea of world peace and the conditions necessary to secure it, by eminent philosophers and social scientists from Europe, Africa, Asia, and Latin America. It is part of a larger project to study world cultures and their potential for convergence. Its intention is to lay bare, with the methodology of empathetic philosophical-hermeneutic inquiry, the similarities and common existential categories underlying human existence and cultural expression, in order to arrive at a philosophical-anthropological foundation for the principle of tolerance.

In bringing together diverse and divergent points of view from a variety of philosophical traditions, the book is itself an example of the encounter of world cultures - at least of thought cultures - that it tries to investigate. It is most significant, therefore, that 1t appears in English and is published in the Indian subcontinent so as to be more readily available to readers from Asia at large. For this audience, the terms "end of history", "multi-cultural society", and "globalisation" have an entirely different ring to them than they have to Westerns intellectuals: Well aware of the legacies of colonialism and the double- bind of experiencing one's own history as derivative, and of having to write in a language other than the indigenous one in order to be heard, globalisation may sound much like a new colonising attempt by the West as the victorious contestant that emerged from the Cold War. Even if Fukuyama, an Asian American living in the United States, may think that, with the apparent world- historical victory of liberal democracy in its American variety, history has come to an end, many intellectuals in the countries of Asia and on the other continents represented in this book may justifiably think that theirs is only about to begin.

The challenge of the book is thus the contestation it implies to the thesis, recently promulgated by Samuel Huntington, of the impending "clash of civilizations". By uncovering the common ground, in the sense of a philosophical- anthropological-metaphysical grounding, of our cultural developments, and by bringing these communalities to the level of consciousness of the actors in the various world cultures, the editors and authors hope to contribute to the strategy of avoiding precisely such a "clash of civilisations".

In today's world, philosophical investigations, particularly those that are indebted to an idealistic. metaphysical tradition. have a hard time to be heard against the din of voices from the camp of "realpolitik". The success of the project - of which the current volume gives but a preliminary glimpse - will, therefore, depend on the strength and rigour of the philosophical analyses presented, and on the degree to which the contributions will overcome the hortative character that pronouncements in favour of world peace invariably exhibit.

In a conflict-ridden world, marked by global migration, violent xenophobia. and a shrill evangelism of particular truths, any attempt at working towards conflict-resolution, any contribution to a theory of convergence of cultures in the face of politically and ideologically manipulated discord, is welcome. And in India, where a philosophically inspired movement of non-violence has brought about political change against considerable odds, such an attempt coming from the metaphysical camp may not be considered entirely gratuitous.

The editors’ and authors’ instinct is laudible that the most "universal" of scholarly disciplines, Philosophy, should again lead the way in this debate. Its catholicity, in the Greek sense of the term, is well documented over the centuries. In dealing with the matter of world peace which has become a matter of life and death, not only for humanity but for the Earth as a whole, in the age of destruction capabilities of planetary proportions, the discipline of philosophy can regain some of the relevance and credibility that it seemed to have lost in the post WW II decades when it became enmeshed in a new scholasticism of hair-splitting technicalities. For this attempt, the editors are to be particularly commended. May the response to their efforts trigger a truly global "Auseinandersetzung" - in the best tradition of philosophical discourse. 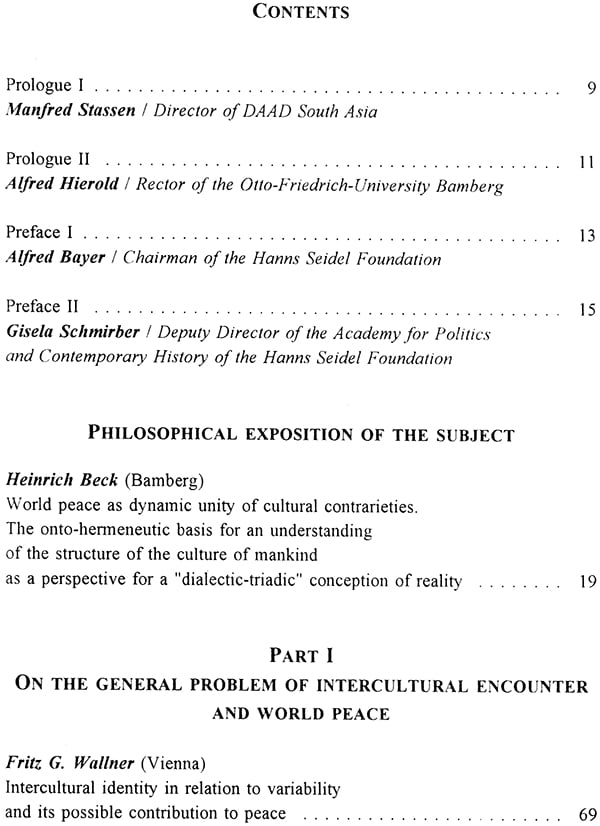 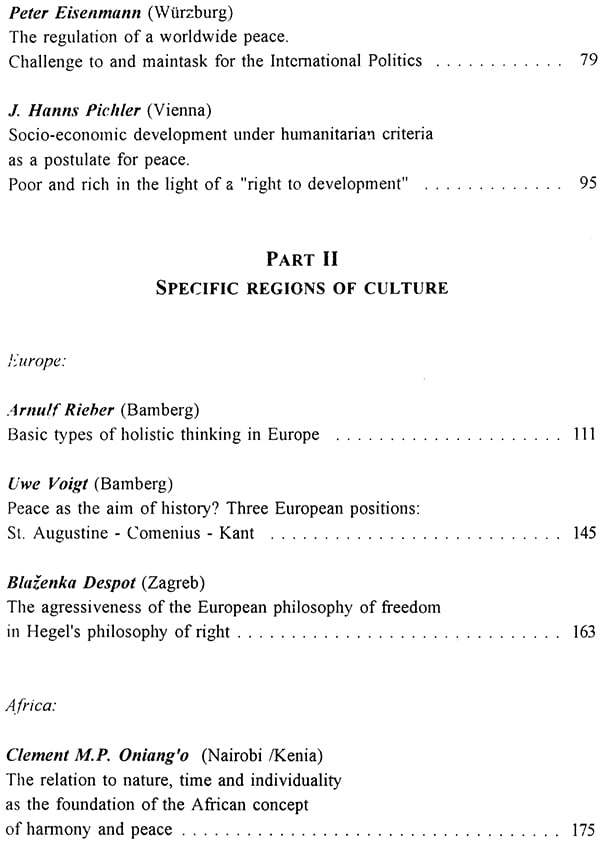 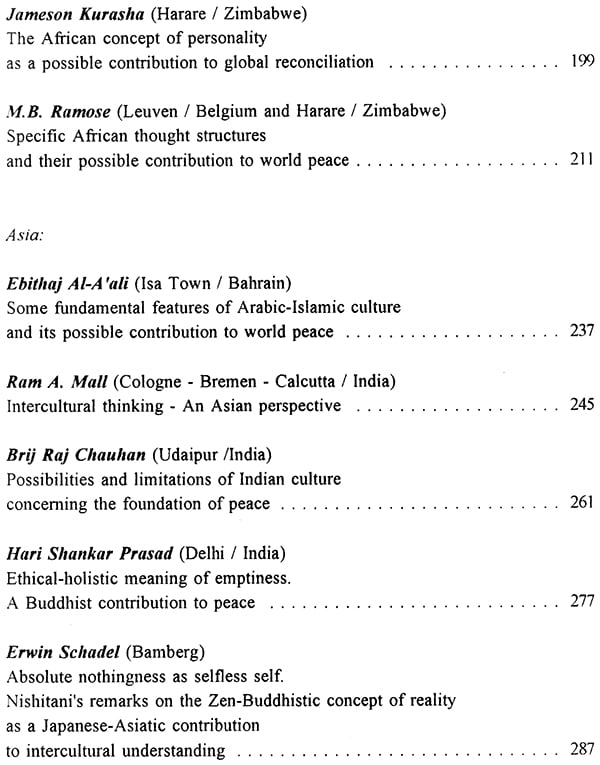 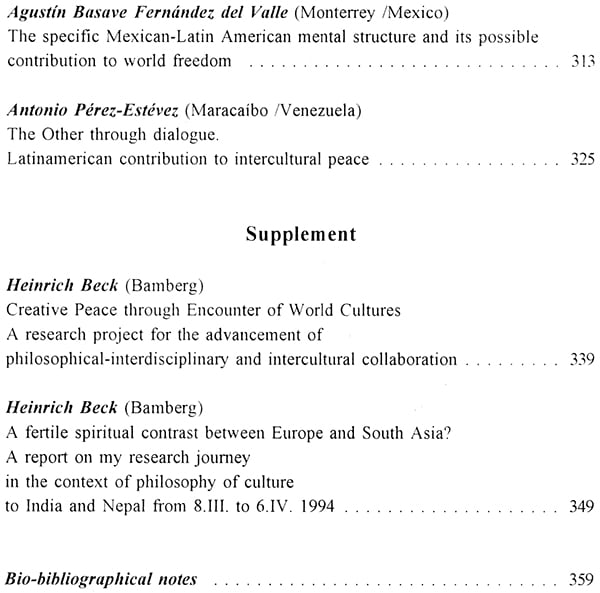 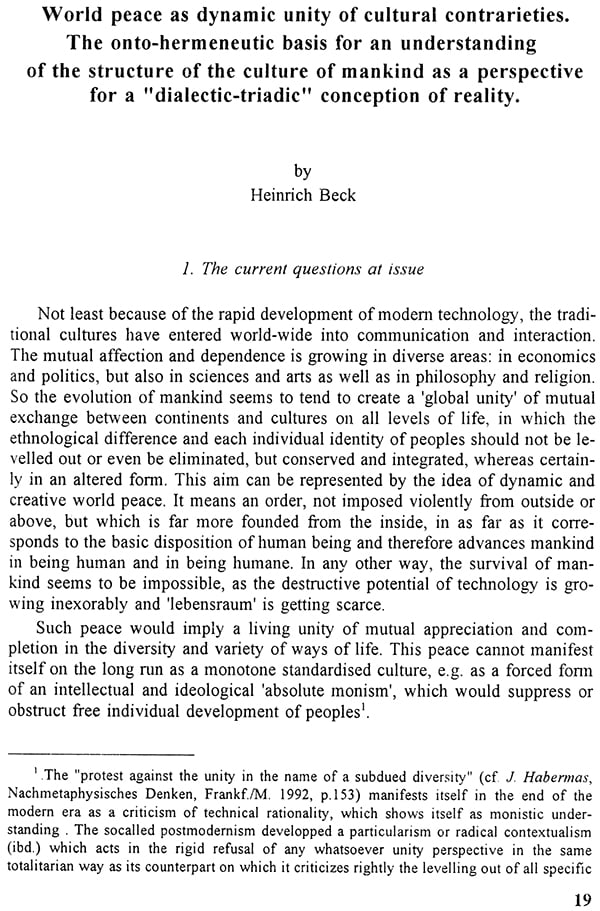 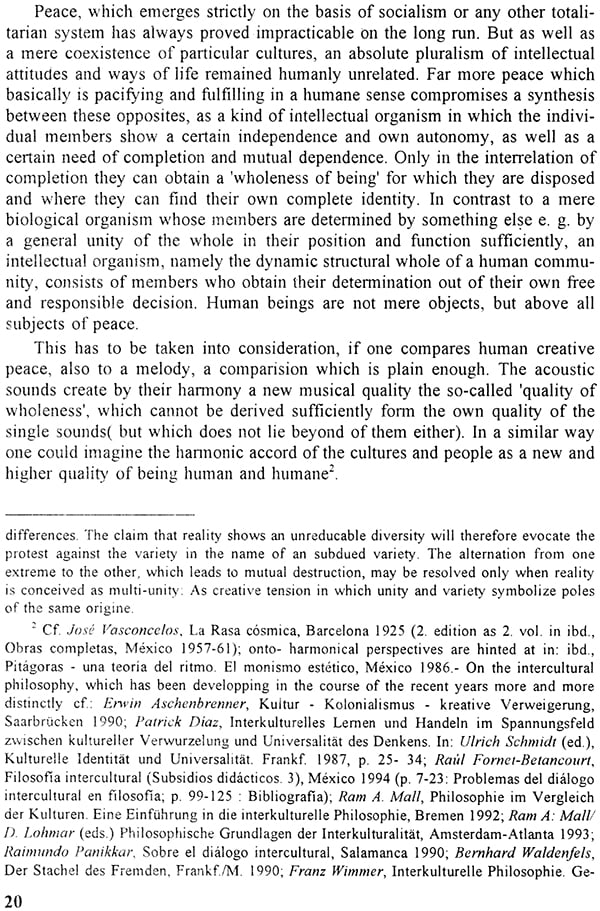 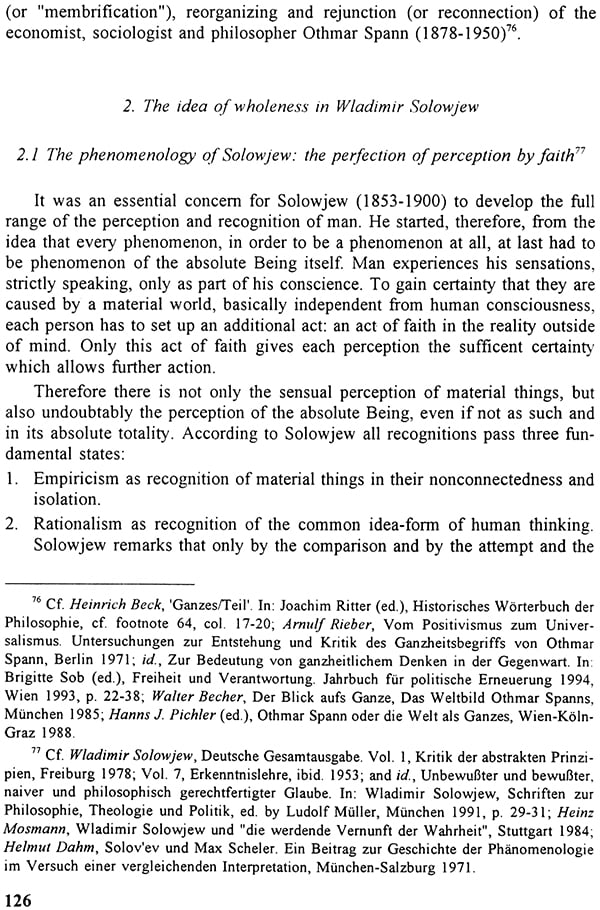 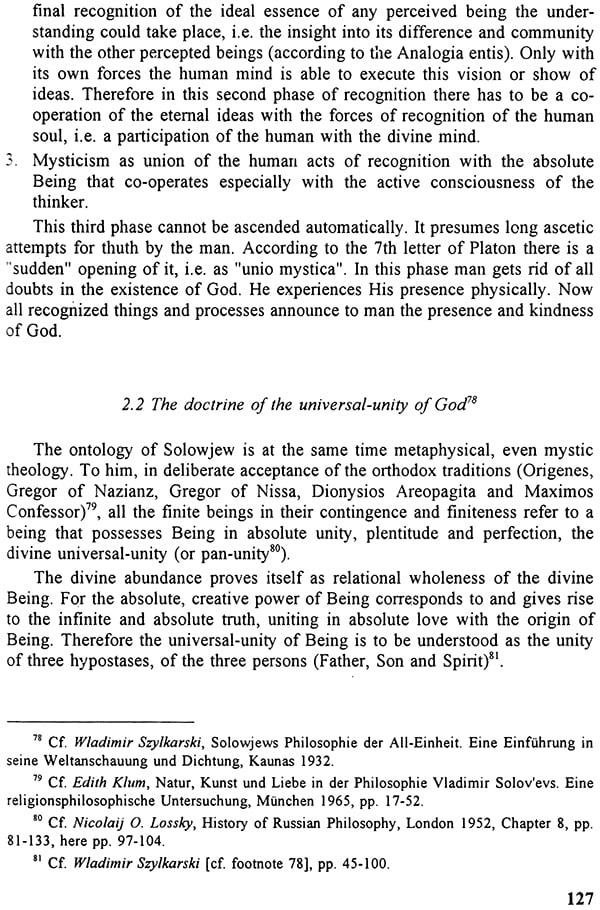 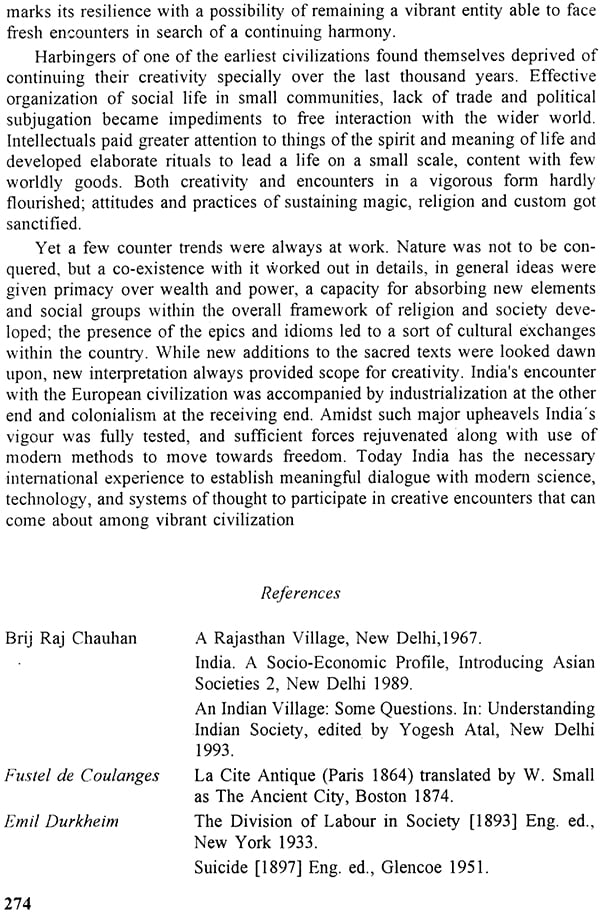 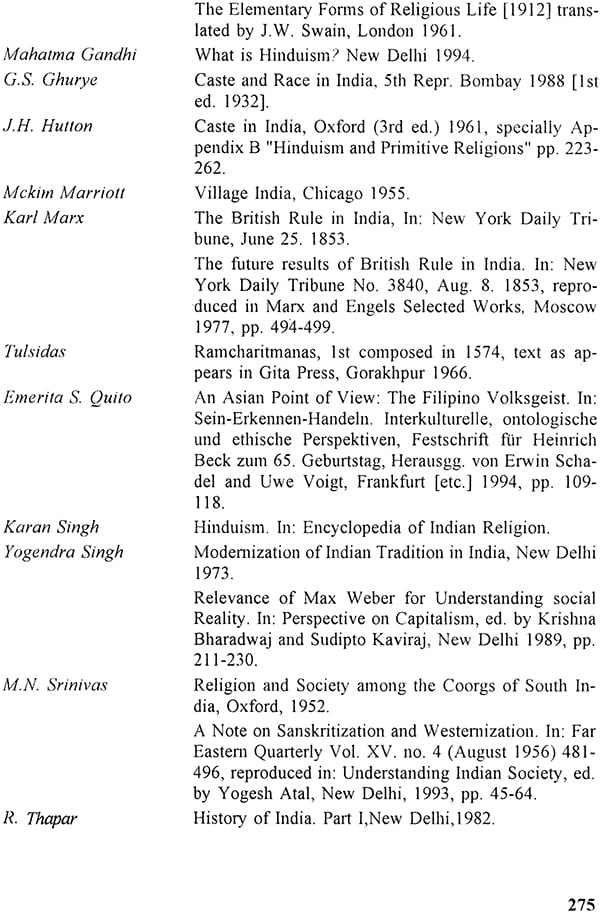 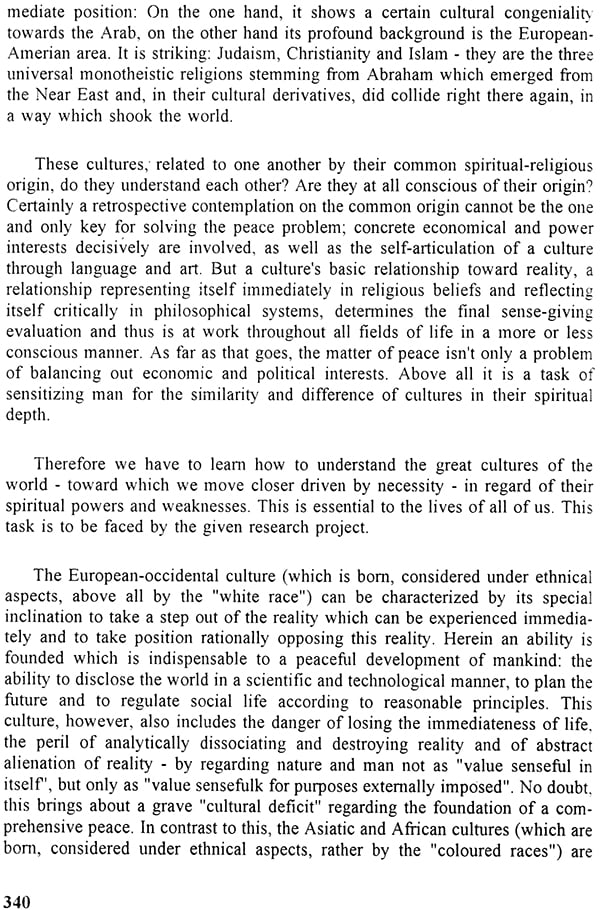 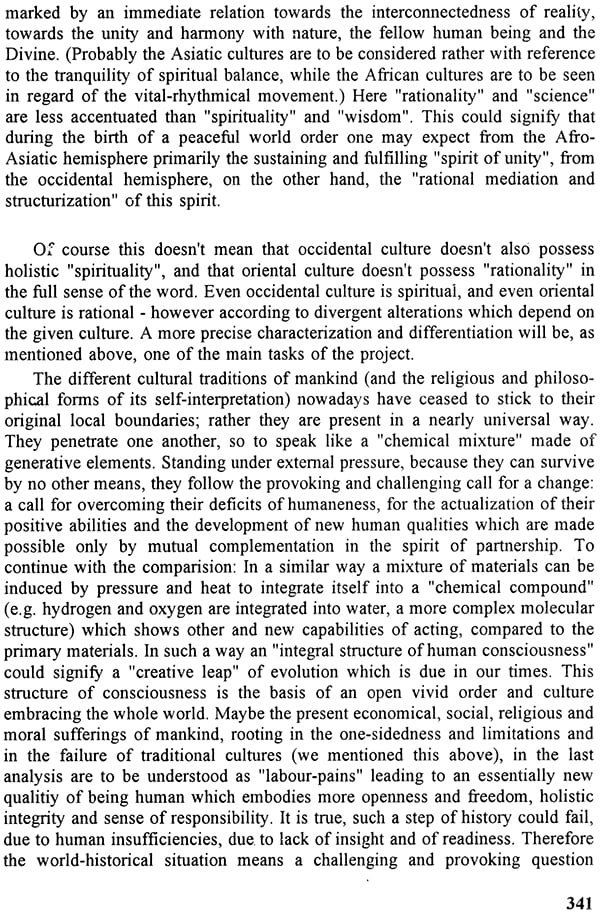 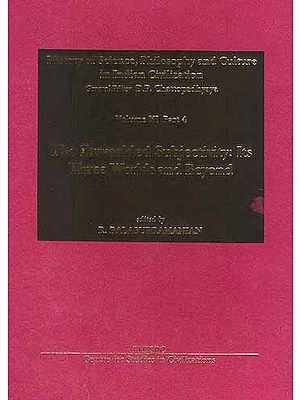 The Enworlded Subjectivity: Its Three Worlds and Beyond (History of Science, Philosophy and Culture in Indian Civilization)
11.2" X 8.6"
$125.00 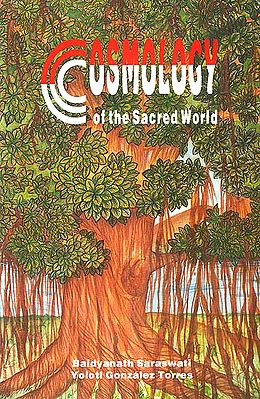 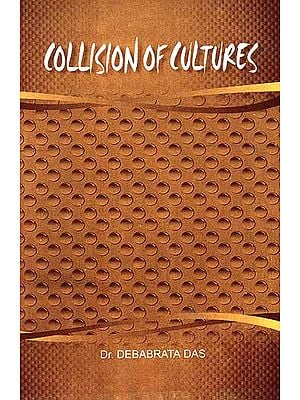 Collision of Cultures: [Opportunities and Limits of Intercultural Dialogue between Globalization and Cultural Identity-in the traditions of Western and Non-Western thought.]
8.5" X 5.5"
$24.80 $31.00  [ 20% off ] 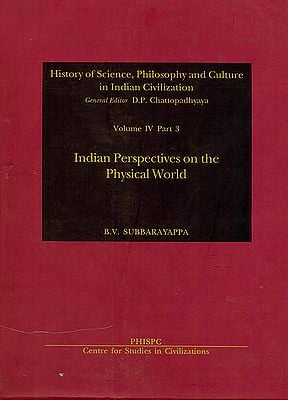 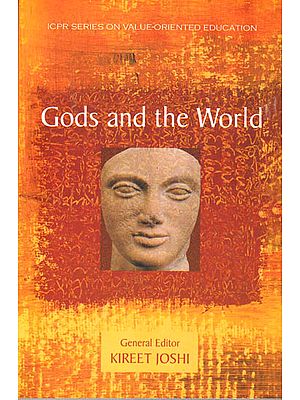 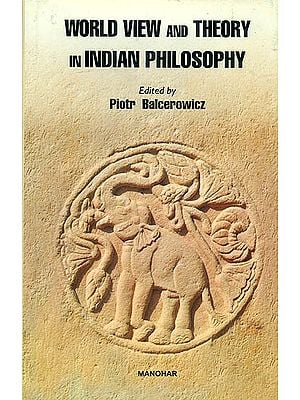 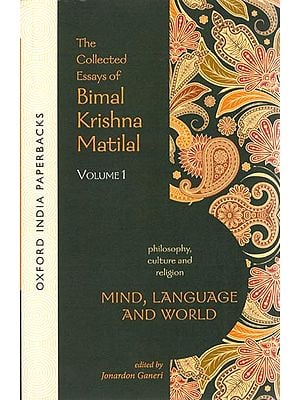 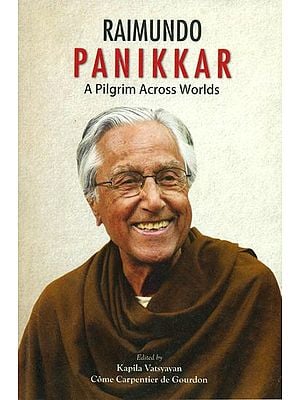 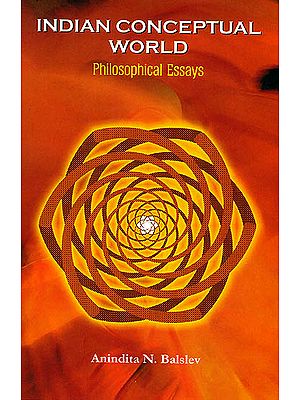 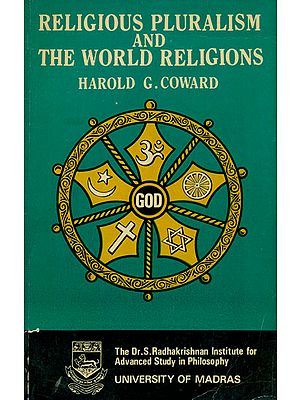 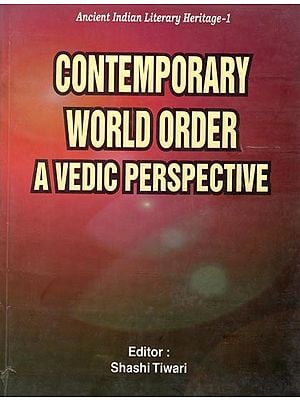 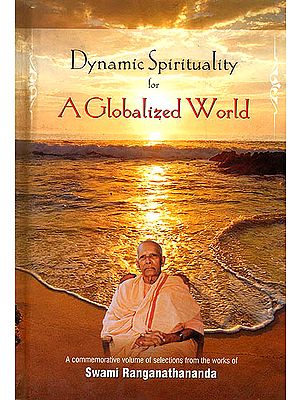 Dynamic Spirituality for A Globalized World (Selection from the Works of Swami Ranganathananda)
9.0 inch X 6.0 inch
$29.00