In the summer of 1956, Lloyd Rudolph and Susanne Rudolph traveled 5,000 miles from London to Jaipur in a Land Rover and recorded their impressions and experiences of people and places encountered on the way. Their passage to India marked the beginning of an academic career spanning over five decades spent researching, writing, and teaching about the country.

Destination India is an account of the Rudolphs’ journey 'East of Suez'-across Western Asia, Turkey, Iran, and Afghanistan into the Indian subcontinent- and of all that they learned there.

Lloyd and Susanne Rudolph feel at home in three places-Chicago, site of the exemplary University of Chicago where they taught for 34 years; Jaipur, once the capital of an Indian princely state where they have lived off and on for 50 years; and Barnard, a village of 600 in rural Vermont which has been their family home since 1960.

It was the glory days of the South Asia program at the University of Chicago with colleagues such as A.K. Ramanujan, Edward Dimock, Bernard Cohn, McKim Marriott, Wendy Doniger, and Sheldon Pollock. In 1960, while teaching Indian politics and history at Harvard, Lloyd and Susanne bought the house on Silver lake in Barnard which has been the family home to their three children, Jenny, an assistant professor at the Hardvard Medical School; Amelia, artistic director of Bandaloop, an innovative vertical dance company; and matthew, who has been teaching about China and India as assistant professor of political science at Georgetown University. During the Last three of their 11 research years in India, they went to the Woodstock school in Mussoorie and learned to speak Hindi.

Llyod and Susanne have loved the great outdoors, trekking in Garhwal, white water rafting on Alaknanda, hiking in the Green Mountains and on the Appalachian Trail, and swimming in Silver lake.

Destination India is a book about why and how India came to occupy a central place in our imaginations and our lives. The opening chapter "Travel Notes from Salzburg to Peshawar," tell the story of getting there. The year was 1956, the months July and August. Day by day and mile by mile, we recorded our impressions and experiences of people, landscapes, and encounters as we drove a 107-inch wheelbase Land Rover from London to Jaipur. Our 5,000-mile journey took us "East of Suez," across the ecological and cultural limes distinguishing Europe from Asia, and then over the khyber into the Indian subcontinent.

As freshly minted PhDs, 26 and 28 years old, we were open to adventure and to knowledge of the Other. Funded by a Ford Foundation Foreign Area Training Fellowship, we found ourselves positioned at the cusp of the area studies era generated by the end of colonial rule.

The second chapter, "Writing India: A Career Overview," the first of the two chapters about being there, gives an analytic account of what we learned over five decades of teaching and writing about India, decades that included 11 research years in India.

The chapter starts with an argument in The Modernity of Tradition, a book based on our first research year in India, that the then-regnant modernization theory was wrong in supposing that tradition would be swept into the dustbin of history and that "they" would become like "us." we showed how and why tradition was often adaptive, change dialectical, not dichotomous, and "we" could learn from "them."

The third and concluding chapter, "The Imperialism of Categories: Situating Knowledge in a Globalizing World," discusses as important methodological lesson we learned from being there. Many Western scholars of "new nations" sought to find universal truths, truths that were said to be true everywhere and always. We found ourselves learning from the Other and grounding our concepts and categories in local knowledge and practice. We characterized our approach as situated knowledge, knowledge that arises out of particular times, places, and circumstances, and that results in contextual rather than universal truths.

From 1956-7 onward, roughly every fourth year until 1999-2000, we took leave to do research in India. In all, we spent 11 years on the subcontinent doing research. Starting with our second research year, 1962-3, the first of our three children accompanied us. Over the subsequent nine research years our children traveled to India with us. They attended Indian schools which included St Xavier's and Maharani Gayatri Devi Girls Public School in Jaipur, and the Woodstock School in Mussoorie /Landour. Living in India, they experienced Indian family life and formed lasting friendship. In the process, they acquired a passable Hindi. Beginning in 2001, as an aspect of our retirement arrangements, we have been able to spend the winter months, January through March, living and working in Jaipur.

At Harvard, where we did our PhDs in political science (Susanne 1955; Lloyd 1956) we studied comparative politics and nationalism With Samuel Beer, Rupert Emerson, and Carl Friedrich. We learned to analyze institutions, politics, and, even then, policy, as they were defined by European and American historical experience. Our graduate education at Harvard in the 1950s did not equip us, as our students at the University of Chicago were equipped from the 1960s onwards, With Knowledge of South Asian languages, history, and culture that the National Defense Education Act (NDEA), South Asia area, and language programs introduced by the Eisenhower administration in the post-Sputnik era made possible. We learned Hindi and about India's history, culture, and society on our own at home and while doing research in India.

Our openness to area and language knowledge was partly a consequence of working while junior faculty at Harvard with David Riesman in his course on American Character and social structure and with Erik Erikson in his course and seminar on life history and identity formation. These experiences prepared us intellectually and emotionally batter than did our graduate education in political science to respond to living in and learning from India. They liberated us from the disciplinary straitjacket of political science and opened the way for us to be humanistic social scientists more concerned with meaning than with causation.

The title of our book, Destination India, has a literal and a figurative meaning. Literally it refers to the country, India, that captured our imagination as a place to encounter, study, and learn from; it refers to the country that we drove to overland from London in a Land Rover in order to be there; and the country that we spent 50 years studying, teaching, and writing about. Figuratively, Destination India becomes a trope for our academic career, for the 50 years we spent researching, theorizing, writing, and teaching about India. Our book tells the story of getting there and of being there. 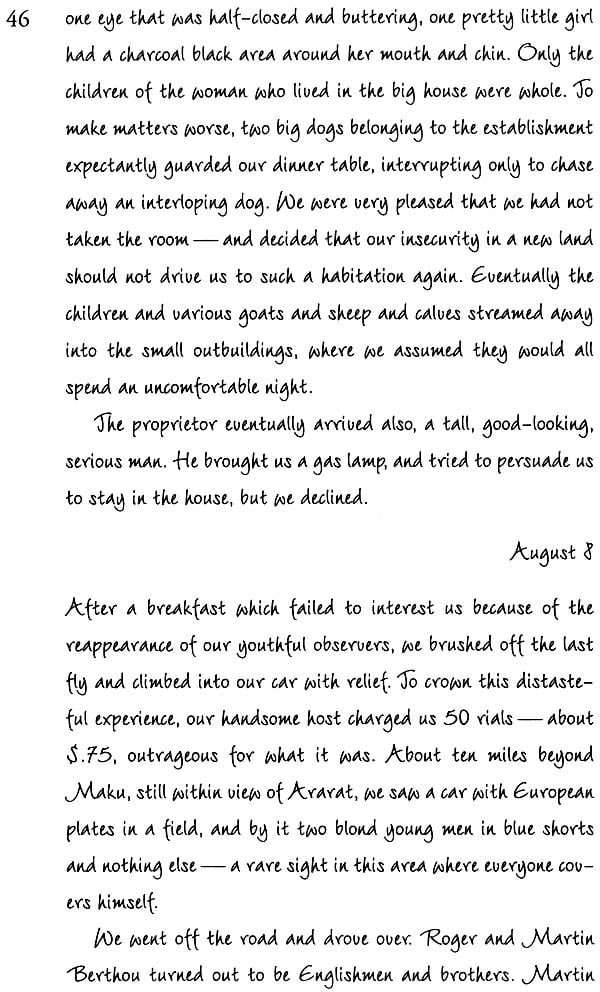 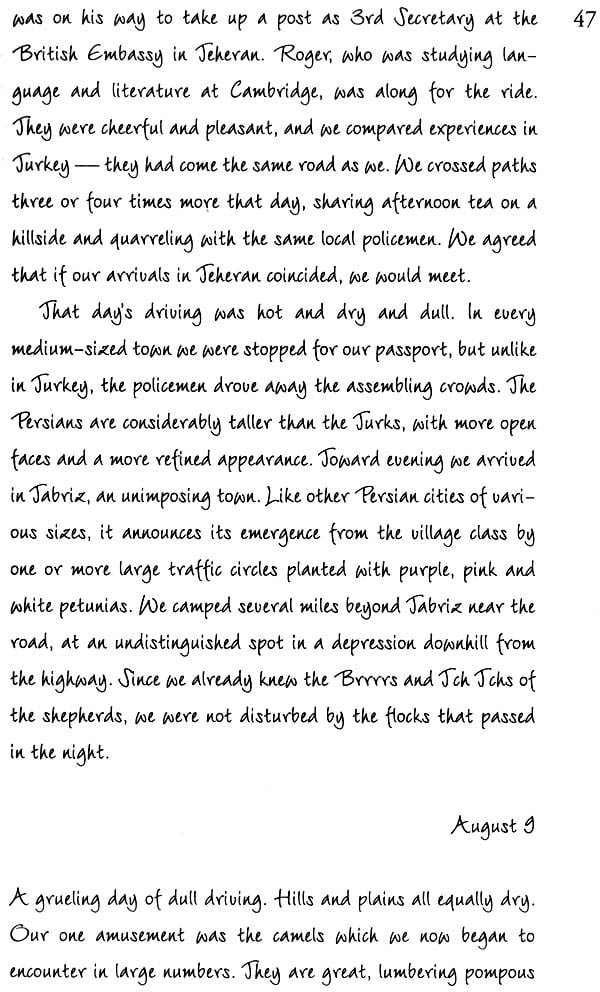 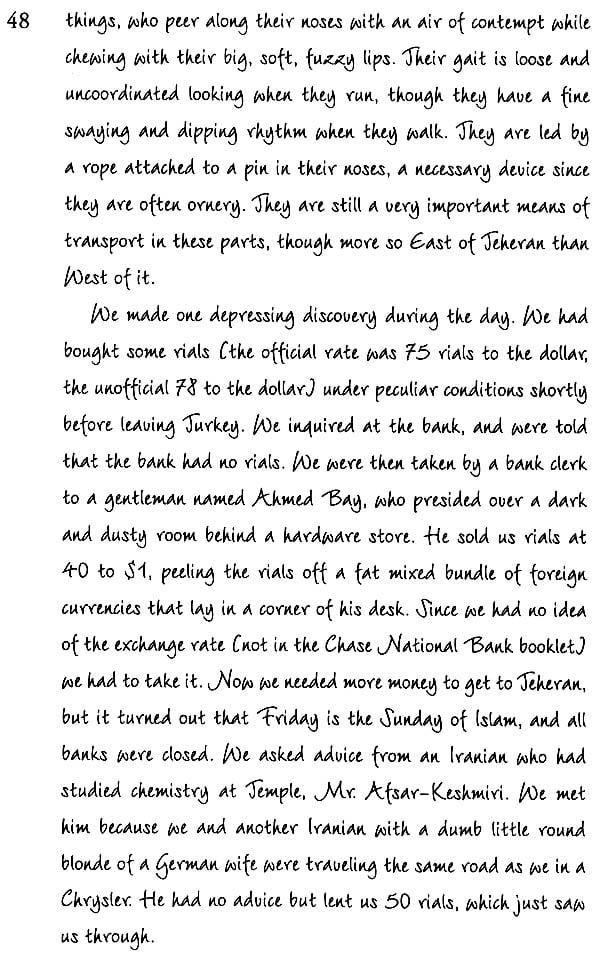 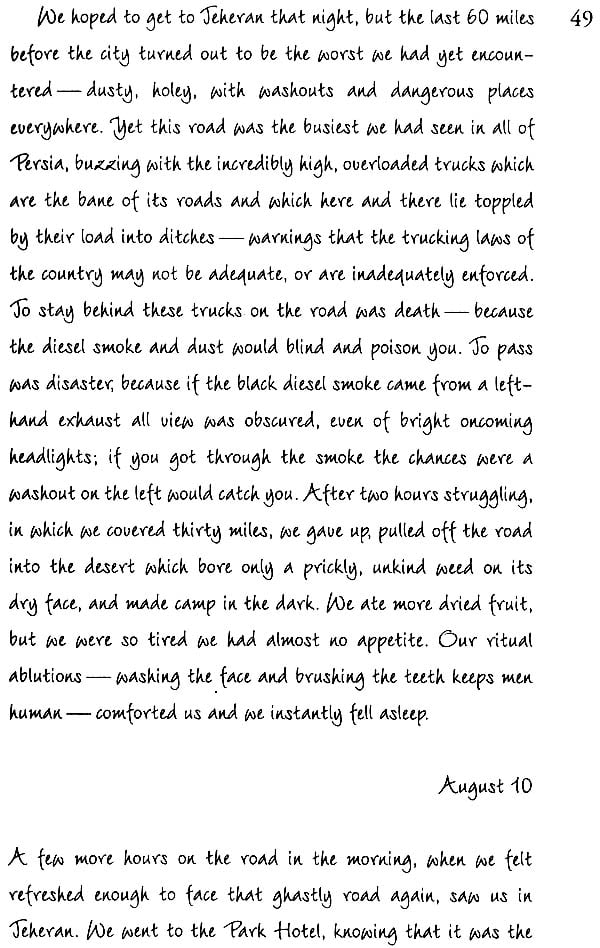 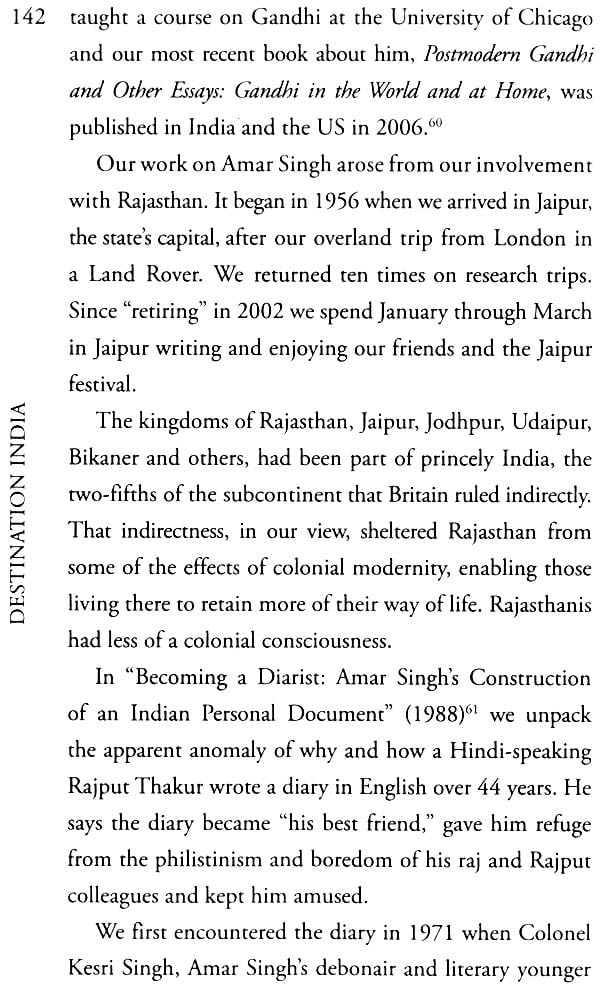 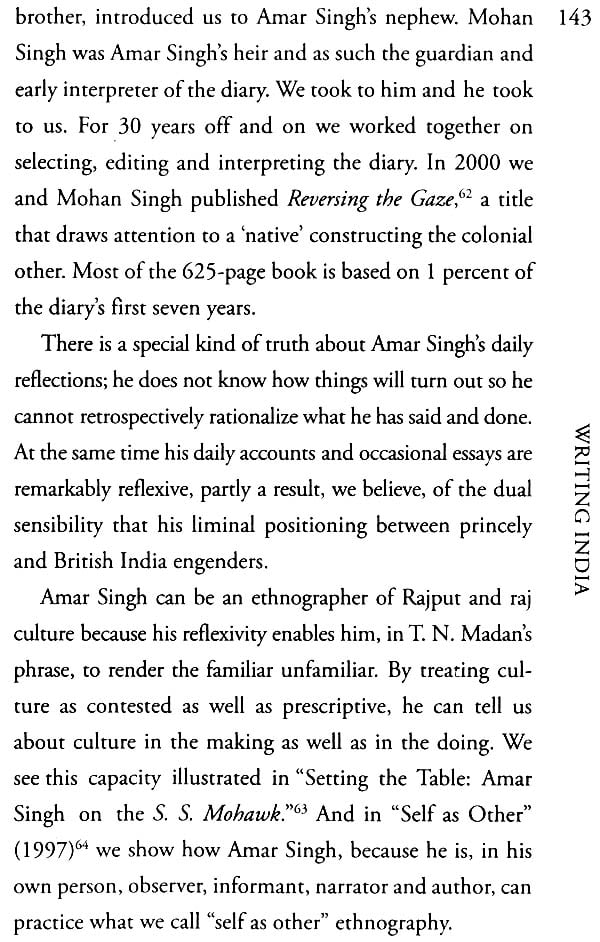 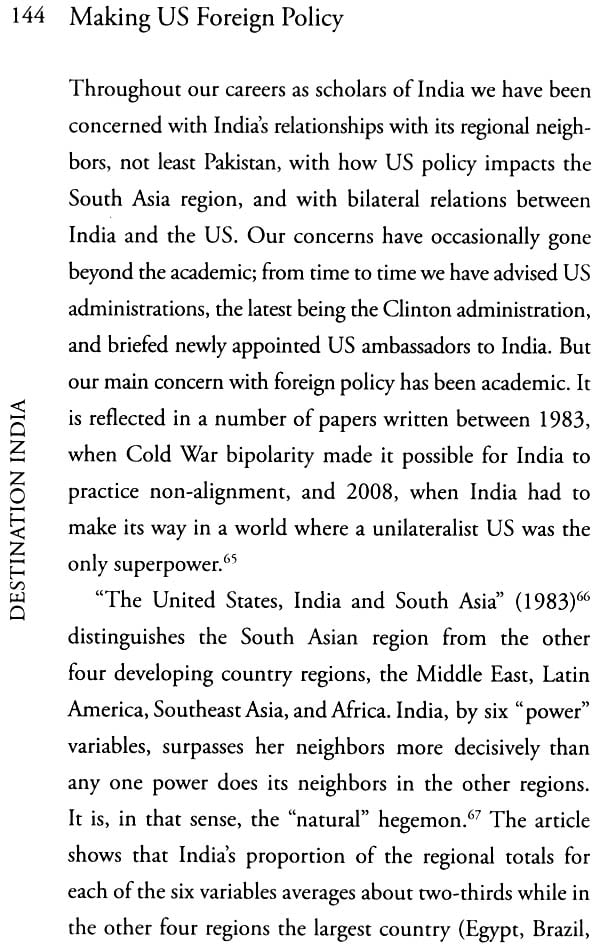 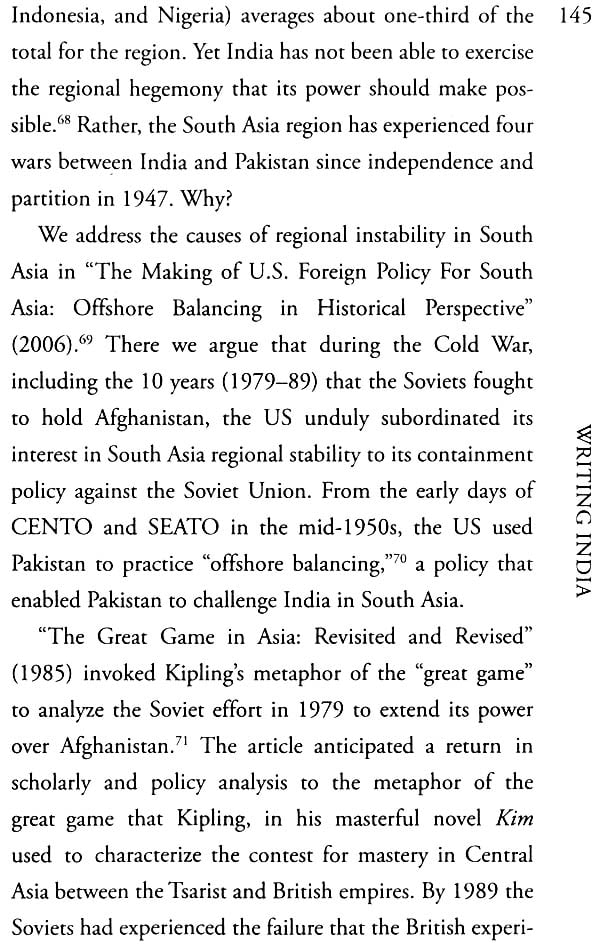 Sea Route to India (In Quest of The Ultimate Destination)
By H. Atmaram
$15 Travancore: The Footprints of Destiny (My Life and Times Under The Grace of Lord Padmanabha)
By Uma Maheswari
$60
FREE Delivery 108 Shades of Divinity (A Sacred Pilgrimage Across India Through 108 Places of Worship of Nine Religions)
By Anju Poodar, Mukul Singhal and Sethu Vaidyanathan
$100
FREE Delivery