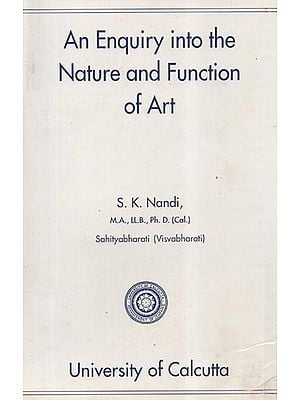 23 years in business
About the Author
Dr. Nandi was a Research Scholar & Subsequently a Research Fellow in the Department of Philosophy, Calcutta University. He delivered extension lectures at the University as Khudiram Bose memorial lecturer.

He was a Senior Fellow, at the Institute of Advanced Study, Simla.

He was awarded Griffith Memorial Research Prize and Sir Ashutosh Mukherjee Gold Medal, by Calcutta University for his outstanding researches on aesthetics.

He has been Faculty Member teaching aesthetics in the Rabindra Bharati University in its different P. G. departments since 1970.

He is a past President of the Indian Philosophical Congress (Ethics and Social Philosophy Section) 1963 & All India Educational Conference (Fine Arts Education section) 1965. He was President elect of the Asian conference, Japan (International Society for Education through Art) 1982. He was a council Member representing India on INSEA Board, 1982-1994.

He is a council Member, Asiatic Society, Calcutta for more than a decade now. He visited England, America, Japan, Bangladesh and Singapore on lecture tours. He is a former Research Director of the R.K. Mission Institute of Culture, Calcutta.

Foreword
Dr. Sudhir Kumar Nandi is one of our front-rank younger workers in the field of aesthetics, and this monograph which was accepted by Calcutta University in partial fulfilment of his candidature for the degree of D. Phil. (Arts)., shows the extent of his competence in the understanding and evaluation of the aesthetic theories of what he calls "the master minds of the West".

It is well that Dr. Nandi does not attempt to build up any theory of his own but confines himself to an analytical study of the theories of six eminent western thinkers, Plato and Aristotle, Kant and Hegel, and Romain Rolland and Croce. The chapter on Rolland is especially welcome since his aesthetic theory and attitude have not yet been sufficiently studied and analysed. Welcome is also the concluding chapter where he attempts a comparative study of the aesthetic theories of Benedetto Croce and Rabindranath Tagore.

Dr. Nandi leans heavily on Croce's theory of art as expression, a theory which he thinks, is upheld by the views of Rabindranath. He has sought to maintain his stand throughout and critically examine all other theories from this point of view. I feel that he has been able to make out a case that demands hearing.

Throughout Dr. Nandi has given evidence of a disciplined mind, critical understanding and sound judgment. He writes with clarity and precision and often with conviction. I hope his book will be a welcome addition to the fast growing literature on the subject.

Preface
After long years, this book is going to have a second edition. Any research work worth the name may be blessed with such ordeals and it is certainly a landmark; this way the present work had some good luck. Secondly Calcutta University has a long tradition of publishing notable books by celebrated authors and "then they are heard no more", as they have no ready agencies for advertising their publications. So a second edition for a Calcutta University publication (Which is not on the list of prescribed text books or recommended books for reference) is a rarity. This phenomenon becomes all the more puisant when the University chooses a few for reprint from its huge list of publications. A second edition of the present volume crossed all these insurmountable hurdles and is just entering the race for survival in a fresh lease of life. The serious students of aesthetics will find some new additions to the core concepts of ancient Indian aesthetics and their counter parts in western aesthetics as well. That will help them sec modem aesthetics in a new perspective. Rabindranath Tagore's characterisation of art as `mays', Caudwell's idea of illusion and `mays' as understood by Samkaracarya & Ramanujacarya may be understood more clearly in an aesthetic perspective. The content of art as `Niyatikritaniyamarahita' may be looked upon as something akin to `Anirvacaniya.' It simply baffles all definition.

Such ambiguities and perplexities being the stock-in-trade for aesthetics land the reader in Alice's Wonderland wherein the reality and its problems intermingle and produce 'centaurs' which enchant both the junior and their seniors. The dividing line between the artist and the appreciator vanish as we learn from the pages of modern aesthetics that intuition and expression were identical. The writer and the reader, the painter & the viewer, the composer and the listener-they are all attuned to the theme of `Rasasambhog' without any discrimination. How it becomes possible, that is a big theme and that is the theme of this volume in its present form.

We look at the subject from the standpoint of Karl Marx, a landmark in the world of progress in human thinking. His philosophy, endearingly called, Marxism pleads for a new social order which originates from the complete take over by the State of the means of Industrial production. According to Marxian analysis this state control provides some type of economic equality to the individual members of the society. In the instant context, if it could be shown that relatively economic affluence and social equality were conditions precedent to the creation of art-work (Music for example), the Marxian State could have been considered a haven for the artists. A necessary relation between comparatively stable economic condition and art and art activity is yet to be established. Empirical evidence speaks to the contrary. Great artists of the world were seldom born with silver spoons in their mouth. Marx's historical materialism could not provide clue to this padoxical phenomenon of want and poverty boosting the art-inspiration of the great artists, we know of The concept of 'Abhava' as enunciated in Indian philosophy would be the key concept for better understanding and appraisal of art-creation. A psychological unrest born of a deep yearning for some unknown fructification and fulfilment goads the artist to newer avenues of creation. Significant forms continuously emerge and thus the Evolution in art runs its course. Art looks moral; art looks rational. The Johnsonian observation that art is moral because it is rational may be looked upon as the verdict of the age of reason. Of course there are idealists like Benedetto Croce who originally professed that 'art was below the logical level and as such was amoral.'

A mature Croce became Johnsonian in outlook when he observed (waiving his earlier assertion to the contrary) that art was moral. His book 'My Philosophy' is a testament to his revised idea. Mere logical approach, analysis and dissection were not competent to find out the real character of art. Its comprehensive character, its encompassing vastness take for its domain the entire gamut of human experience and the beyond. Metaphysics is not mere logic. When one apparently fails to prove something, his case is not lost. When one believes and his belief almost comes near religion, the belief is to be respected and given its due. We cite the historic case of Tagore-Einstein dialogue. 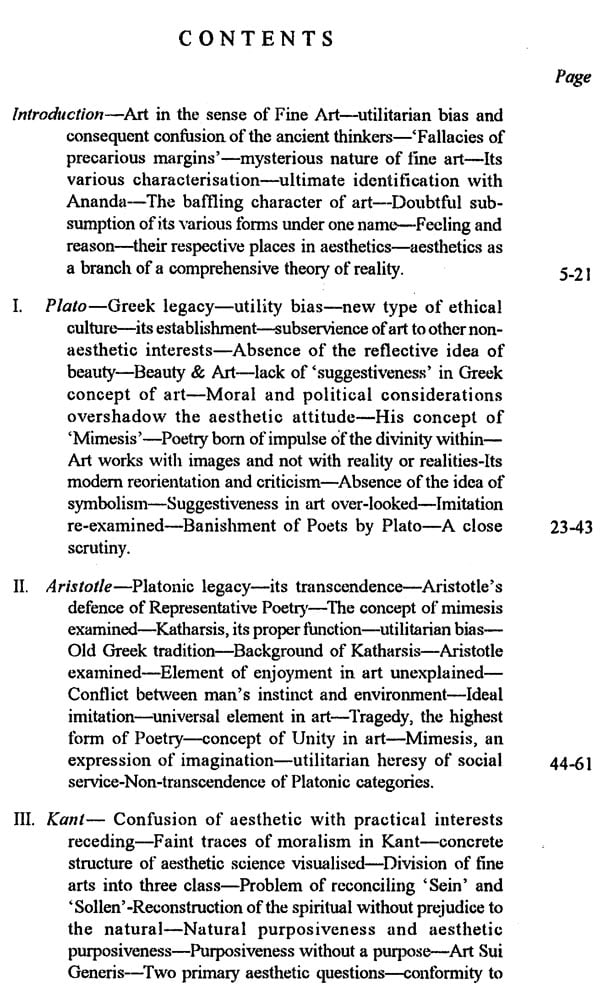 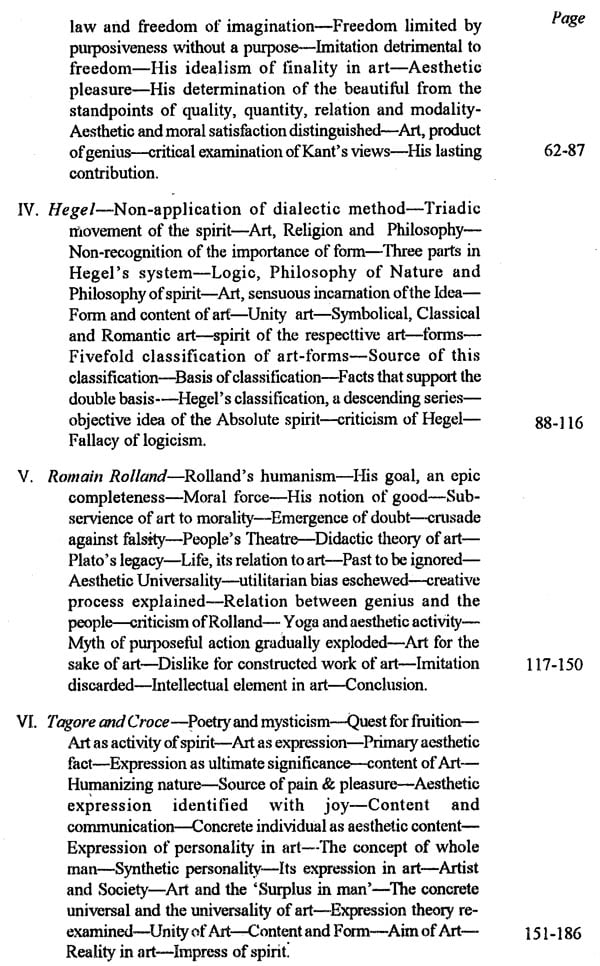 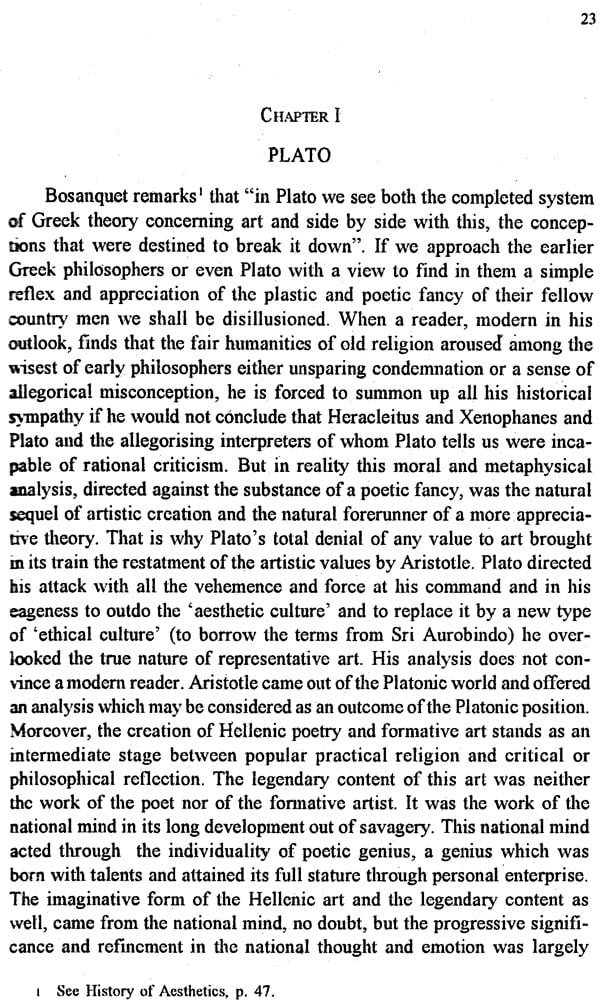 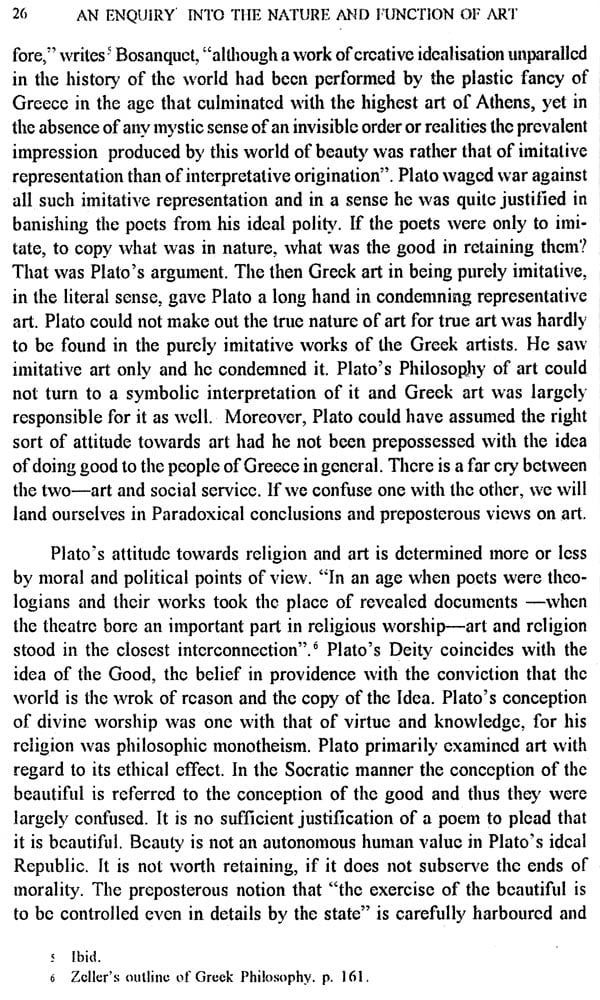 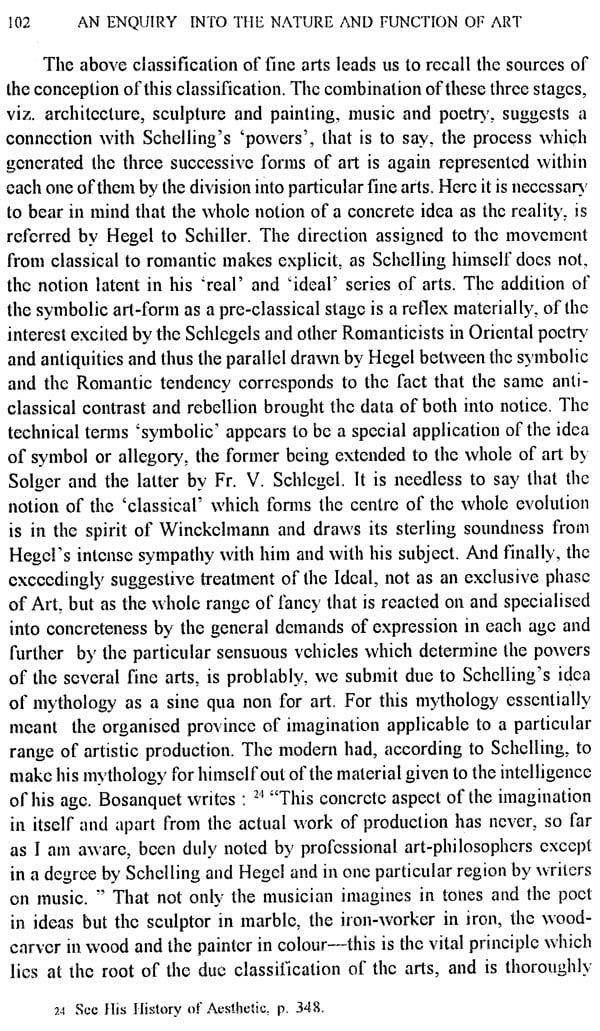 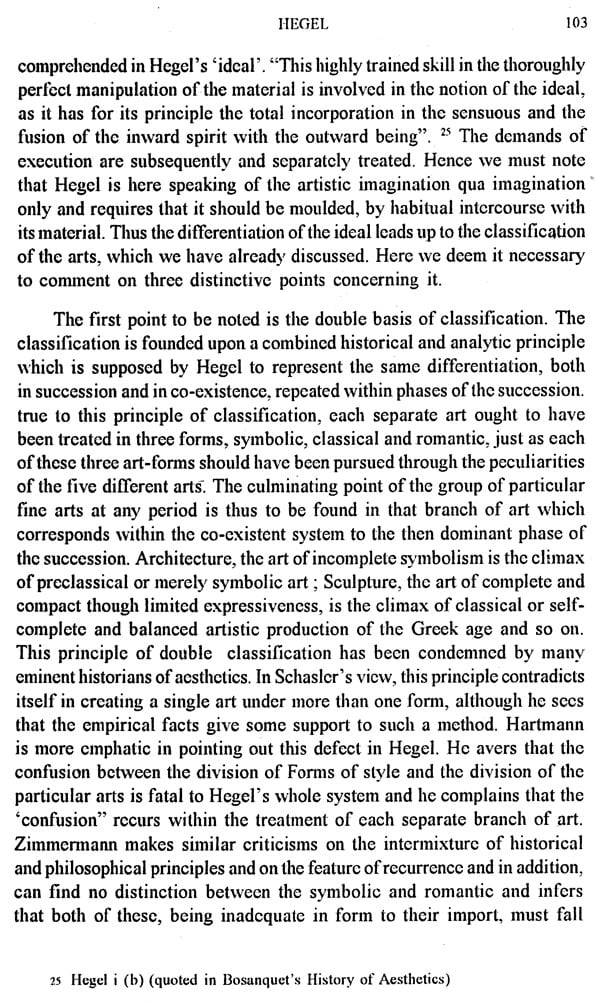 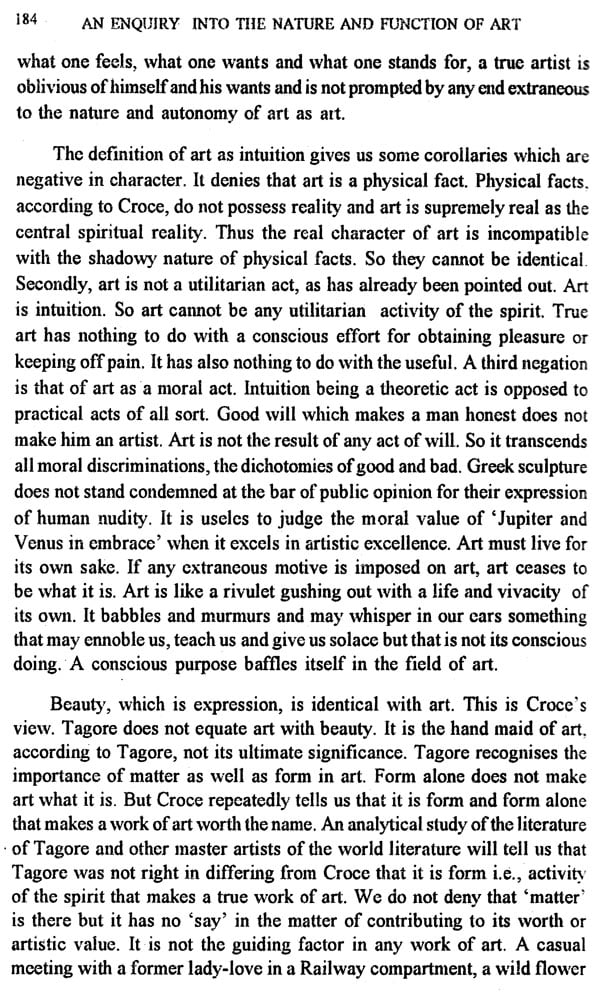 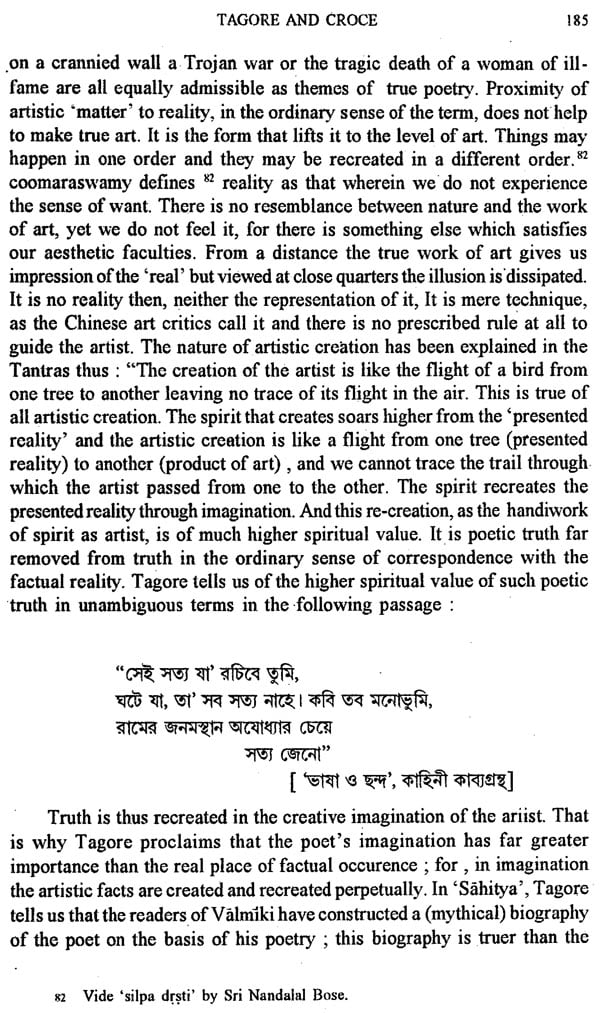 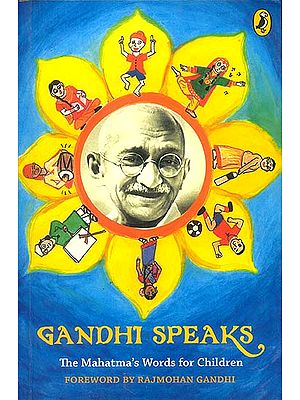 Gandhi Speaks (The Mahatma’s Words for Children)
By M.K. Gandhi
$13 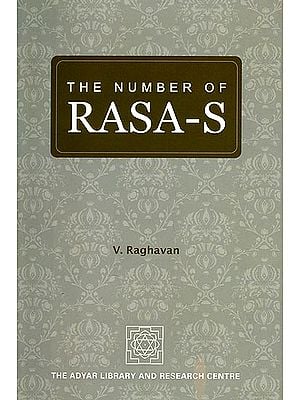 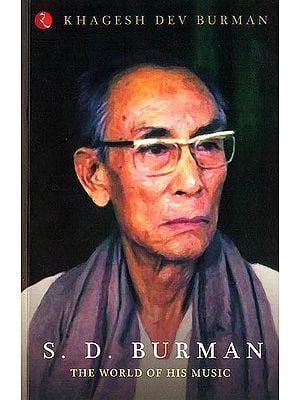 S.D. Burman (The World of His Music)
By Khagesh Dev Burman
$23.50
FREE Delivery 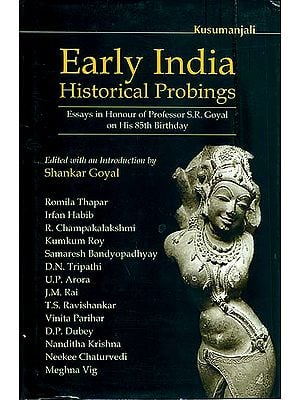 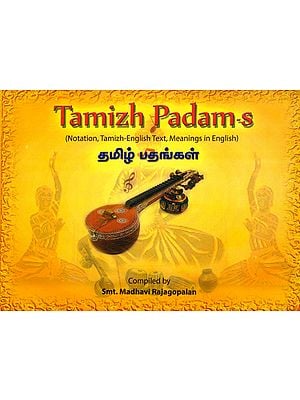 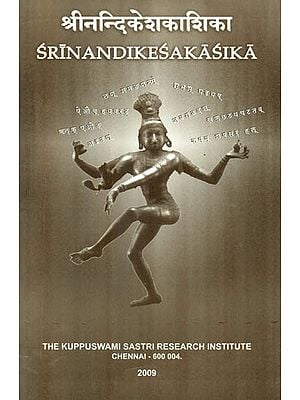 The Mirror of Gesture Being the Abhinaya Darpana of Nandikesvara
By Trans. Into English by Ananda K. Coomaraswamy and Gopala Kristnayya Duggiralla
$24
FREE Delivery
Best Seller 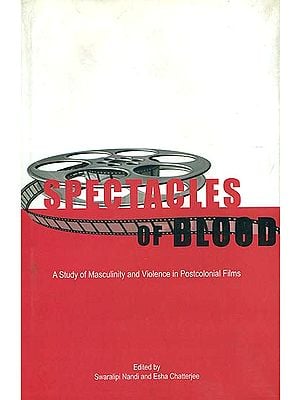 Spectacles of blood (A Study of Masculinity and Violence in Postcolonial Films)
By Swaralipi Nandi and Esha Chatterjee
$34.40
FREE Delivery
$43  (20% off) 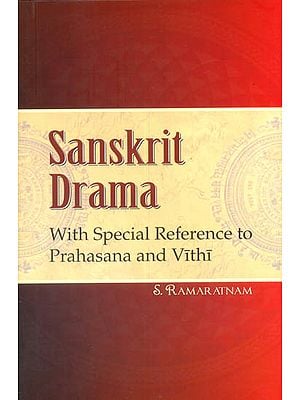