An Epic Life Ramanand Sagar: From Barsaat to Ramayan 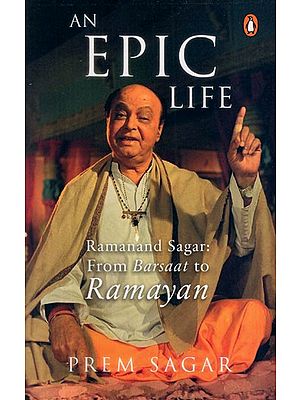 $33.00
Notify me when this item is available
Save to Wishlist Send as E-card Share by Email
About The Book

On 25 January 1987, with the telecast of the very first episode of Ramayan, Indian television changed for all time to come. In a matter of weeks, the series became a national obsession. During the Ramayan slot, roads emptied out. No marriages and political rallies were scheduled for that time. More than three decades later, there has been nothing to match it.

Ramanand Sagar, the man behind the phenomenon and a successful filmmaker from Bombay, was among the first to recognise the immense power of television. He first made his mark as a writer in Raj Kapoor's Barsaat (1949). From 1961 to 1970, Sagar wrote, produced and directed six consecutive silver jubilee hits—Ghunghat, Zindagi, Arzoo, Ankhen, Geet and Lalkar.

An Epic Life: Ramanand Sagar, From Barsaat to Ramayan, written by his son, Prem Sagar, an award-winning cinematographer, is an intimate look at the life of a visionary. It traces Sagar's life from his birth in Kashmir in 1917, his dramatic escape in 1947 when Pakistani tribesmen attacked the state, his arrival in Bombay and his subsequent glorious career—the crowning achievement of which was the smashing success of Ramayan.

PREM SAGAR began his career as a cinematographer with Ramanand Sagar's Lalkar (1970) soon after completing his education from the Film and Television Institute of India (FTII), Pune where he was a recipient of a gold medal for the best academic student of the year and a silver medal for the best photographed student film.

He was associated as a cinematographer or technical adviser with several popular and memorable films of Sagar Art, including Charas, Bhagawat, Hamrahi, Pyara Dushman, Armaan, Jalte Badan, Badal, Prem Bandhan and Salma. He then turned director with Hum Tere Ashiq Hain.

Prem Sagar has to his credit a total of fifteen awards as Director of Photography for Charas, Lalkar, Hamrahi and Jalte Badan, and many accomplishments in the field of still photography. The honours include the prestigious associateship of the Royal Photographic Society of Great Britain and the Artiste Federation Internationale de arts Photographique Paris.

Jai Shri Ram! Would it be right to reveal the sensitive secret truths—political, personal or miracles—of Papaji's life journey and his divine mission of making the legendary TV serial Ramayan which was destined at birth and revealed as early as 1942? I am not sure whether I should be penning these memoirs, as a biographical tribute to Papaji—my revered and respected father Padmashri Dr Ramanand Sagar.

In different yugs, the teachings of the greatest Indian epic Ramayana were brought to mankind by different people. At first, Shiv Bhagwan narrated to Parvati Maa with king of crows Kakbhushandi listening. Later, Brahmrishi Valmiki penned the Ramayana as a kavya (poetry). Sant Tulsidass wrote it in Awadhi language. In this kalyug—the age of vice and downfall—Papaji was perhaps born to revive and spread the message of the benevolent gracious Shri Ram to mankind through television, the most powerful audio-visual mass media of the previous century.

All of Papaji's years in journalism, as an author of stories, stage plays, books and films—he wrote the dialogues, story or screenplay of twenty-nine films—and his role as a producer and director of such block busters like Ghunghat, Zindagi, Arzoo, Ankhen, Geet, Lalkar, Charas, Baghavat, were only a step towards his final goal of bringing Ramayana to television viewers throughout the world. We brothers—Subhash, Anand, Moti and me—and grandson Jyoti were sent to this world to assist him, almost like just like the vanar sena assisted Shri Ram. Subhash handled the production and direction, editing was handled by Anand and Moti and camera, technical and marketing was my forte.

To get his biography recorded in his voice, I chased him for two years to get two hours of recording. In some personal moments with me, he would unveil the iron curtain surrounding his scratched soul. Late at night in my bedroom I would note down these incidents and now all this has become the basis of these memories as a biographical tribute. He never wanted to show his pain and wounds to anyone. I was the chosen one and I feel I was the closest to him among my siblings. The question still remains. Did Papaji give me permission to delve into his personal life—to reveal to seekers and his bhaktas, his journey from a prince to a pauper to a Maharishi to the maker of Ramayan and Shri Krishna? I am not even a speck in this divine yojana. I am not a writer and do not have the capacity to encompass Papaji's life and times and work and mission. But I feel pitra bhakti has given me the courage to try to pen down the memorable life and times of Dr Ramanand Sagar, my reverend father and to me, Papaji. I am indebted to my son, Shiv Sagar, for encouraging me to accept this missionary task. With the blessings of my ancestors, Gurus and Gods and with Papaji's permission and Durga Maa's blessings, I am making this attempt. Please forgive me for any mistakes or shortcomings and for any revelations too personal, sensitive or spiritual. May Maa Saraswati be with me.