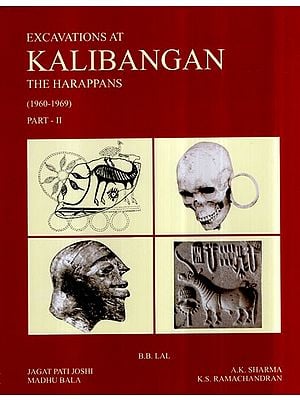 The first volume of the report on the excavations at Kalibangan was prepared in 2000 and published by the Archaeological Survey of India in 2003. In it we had given an account of the settlement in so far as it related to the Early Harappan times (Period I). In the present volume, which consists of two parts, we place before the reader an account of the Mature Harappan settlement (Period II). We once again deeply apologize for the inordinate delay in the publication of these two volumes, which has been due to reasons beyond our control, as mentioned in the Preface to earlier volume. However, "Better late than never" is the maxim which gives us some solace, and we earnestly hope that the archaeological fraternity will forgive- us for the delay.

As in the case of the earlier volume, in the present one too the credit of organizing the work must go primarily to Shri Jagat Pati Joshi. He has taken pains to piece together the field-drawings. making them presentable. He has also analyzed the stratigraphy of the site, paying attention to each and every trench. Along with Ms Madhu Bala, he has examined the vast store of antiquities recovered from the site, selecting them for the purpose of this report and writing on them. Ms Madhu Bala has also written the chapters on small finds and pottery. Shri A.K Sharma was in charge of the cemetery area and has contributed a detailed chapter on the burials, besides KS. Ramachandran who has written on some of the pot-burials excavated by him. Prof. Bala Subramaniam of lIT and Jagat Pati Joshi have contributed a chapter on Harappan measuring instruments from Kalibangan. Way back, in 1955, the late Shri A. Ghosh had carried out explorations in certain parts of the Ghaggar and Drishadvati valleys and had duly recorded his findings in a diary. Since the material is related to the subject-matter of this Report, an opportunity is taken to include here his field-notes, along with a paper on the subject, which he presented at the All India History Congress, Jaipur, on December 29, 1951. Shri R.K Sharma, has carried out detailed scientific studies of the fragments of the seals at the science laboratory of the Archaeological Survey of India, Dehradun (Uttarakhand).

Because of such a diverse authorship, it is but natural that the style of presentation and language vary from chapter to chapter. Further, since the report had to be submitted to the Director General, ASI, by the dead-line of May 2007 and most of the chapters poured in just before that, no worthwhile editing was possible. Thus, the reader is requested to look more for the contents of the chapters rather than go into the nuances of the style and language.

As the senior most amongst the contributors, I have great pleasure in' placing this report in the hands of the reader, hoping once again that we would be forgiven for the extraordinary delay.

Like any other Harappan Site of mature period in the Sub-continent, Kalibangan also yielded a large number of lithic tools both in the Early Harappan and Mature Harappan periods. The lithic appendage started in the shape of a small blade industry of jasper, agate and chalcedony' having blades, points, side scrapers, notched blades and serrated blades along with chert parallel sided blades which were serrated, backed or notched. The small blade industry vanished later in Harappan times at Kalibangan. There was a prolific long blade industry in chert blades available at Mohenjo-daro, Harappa, Lothal, Surkotada, Allandino, Dholavira and Kalibangan. Parallel-sided blades have become a diagnostic culture-trait of Harappa Civilization. At Surkotada and Bagesara a flourishing bone tool industry is also associated with the lithic tools. Though chert blade had made its appearance in the earlier period at Kalibangan but it is available in all centres of Harappan Civilization in the mature period. The tradition appears to be a hangover of the earlier technology. Soundara Rajan has rightly said "the ancestry of Harappan lithic tools assemblage is naturally to be looked for in earlier Sukkur Rohri Stone cultures which have been called as proto-neolithic by Paterson."

In the Harappan period at Kalibangan, there has been a sudden rise in the making of chert blades as compared to other forms of lithic tools.

In R.V. Joshi's classification in post Palaeolithic age, the blades are predominant and the geometric forms eg lunates, triangles and trapezes are very less in almost all the microlithic industries of the Chalcolithic period. This could be due to the fact that in a food producing economy, tools forming part of the hunting economy are much less. The utility of stone implements begins to decline with the gradual appearance of metal. Of all the earlier forms the blade remains to be most useful.

Chert is found from Rohri hills near Sukkur (upper Sindh) and is marked by the natural design of tree ring pattern or flesh of fish on its surface. Allchin has remarked:-

"In spite of the common use of metals, stone was not abandoned, and chert blades were prepared at the settlements from cores which in turn had been exported from great factories such as that at Sukkur. At Sukkur blades of the type found in Mohenjo-daro and other settlements were also made in large quantities at extensive working areas using the same sources of material as Palaeolithic craftsmen had done earlier. The Harappan craftsmen cleared the earliest materials and flint nodules that had suffered long exposure to the elements, and piled them up in long ridges, or threw them down the sides of convenient hills. They then used the freshly exposed nodules of flint for blade production. The craftsmen appear to have sat cross-legged at chosen spots in the cleared area, and the actual places where they sat could still be recognized when we visited the site in 1976 - some four thousand year later! Small kidney-shaped areas were completely cleared of flints down to the residual soil, and concentrations of waste materials, cores and blades could be seen beside them. Studies of the stone industries from settlements of the Mature Indus period show a distinct and probably rapid development and convergence from the more varied, individual assemblages recorded at Early Indus and all earlier settlements. The range of artifacts made from blades (in which the local and regional distinctions were seen), drops away almost entirely. What is left is an industry consisting of long, regular blades made from carefully prepared cores of very high quality material obtained from outstandingly good sources of supply. The blade industry of this period is highly professional and this crafts shows an effortless competence, without apparently any desire to produce novel or special results. This is a clear example of the kind of craft specialization that took place at the beginning of the Mature Indus urban period"

Chert is reported from Kirma Hills Punjab, lime stones of Saurashtra and Kutch, Upper Krishna basin of north Karnataka, Chaibasa and Chakradharapur in Singhbhum Distt. of Bihar. It was reported by Cockburn from Mirzapur region of U.P. It is plausible that the Harappans were getting the raw material for their lithic tools from these areas in nodule form. It is brown and grey variety of chert which has been generally used. From the available nodules and flakes it appears that the tools are locally manufactured at Kalibangan. The parallel sided blades and cores are available from almost all the layers at Kalibangan. We would like to agree with Sankalia regarding Mohenjo-daro.

Marshall said that "since the blades and cores were found in all the houses, the blades were made in every house, as and when required, probably by the servants of the house, till his statement is not supported by precise figures, but is an impression, based on long observation of the excavations at Mohenjo-daro. Moreover, we do not know whether the debitage was also found in every house. Hence the current view is that in these urban sides, the blades were imported from the factory sites like Rohri, as was done from Grand Pressigny, in France, during the Neolithic times in Western Europe (Subbarao in Sankalia et al. 1958; 59; Gordon 1958; 70). However, since cores are reported from the excavations at all the sites, what is more likely was that cores were first prepared at the factory site and exported to the cities, where trained persons took out the blades as and when required.

So far the technique is concerned the Harappans at Kalibangan followed `pressure flaking' and 'percussion flaking' techniques as revealed by cores and waste flakes available. The mass manufacture of blades was made from `prismatic core'. Subba Rao has said that unlike the Mesolithic people, the Harappans adopted the Crested Guiding Ridge technique as it involves faster mass manufacture of blades. "Somewhere in the Neolithic Period in the Fertile Crescent this new technique of mass production of blades started amongst the incipient agricultural communities as per Braidwood and it continued to flourish right into the Bronze Age. It seems to have spread in either direction towards Europe and India." The Crested Ridge technique involves (1) dressing of the nodule and removal of outer cortex. Some nodules show the cortex, (2) Preparation of the ridge by removing a series of flakes and the ridge to control the length of flakes, (3) Retouching of blades. Paddaya has brought to notice that Sankalia's experiment on Navdatoli material showed that blades were used for "scraping, cutting, slicing and paring of soft material wood and bone hafting".

The excavations at Kalibangan, in the Harappan levels itself has yielded raw material in the form of chert nodules and pebbles, flakes, cores and tools. The flakes outnumber other tools. The core and debitage relationslip is quite low suggesting input of chert nodules, blades and cores from the source but for urgent necessity and use local manufacture in a limited scale appears to be need based. Some of the unique types though thier number is very few are tanged points, shouldered points, drills, notched points, arrow heads, burins, serrated blades and notched blades. It appears that the tanged points and the shouldered tools were used for boring or reaming wood. Besides the normal flakes a large number of blades appear unused. The small fragments of parallel sided blades were inserted diagonally into wooden sticks fixed with bitumen in wooden sickles as was done at Mehrgarh and were used in for harvesting cereals. These tools were used for specific technological and subsistence activities."

The blades are of various sizes. The biggest one has a maximum length of 12.5 cm and width 3.5 and the smallest has a length of 2.7 cm and width is .5 cm. Notching, serration, retouching is occasionally done on the blades as per the use. There are blades which are used as end-scrapers also. During the times of trimming the nodule large flakes come out which have been used as scrapers of various types, points and burins. Some of the tools could be used in multipurpose ways. In some blades the bulbous ends are deliberately chipped off. 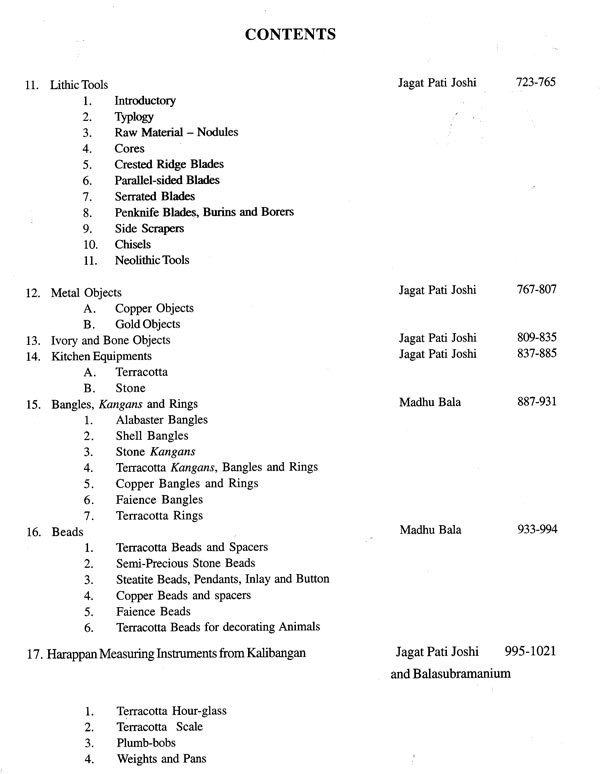 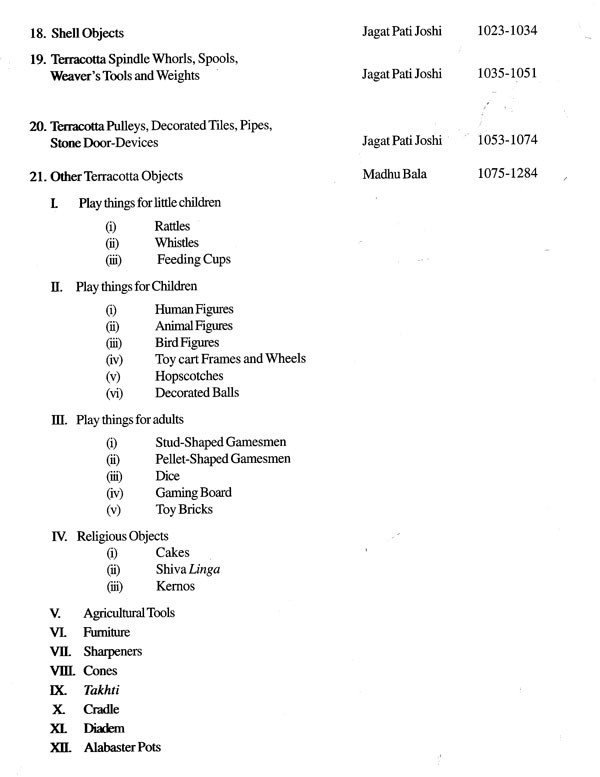 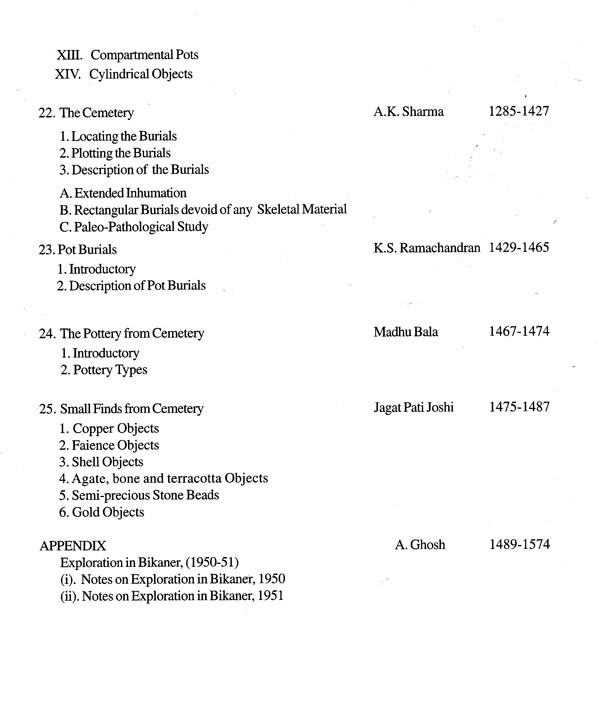 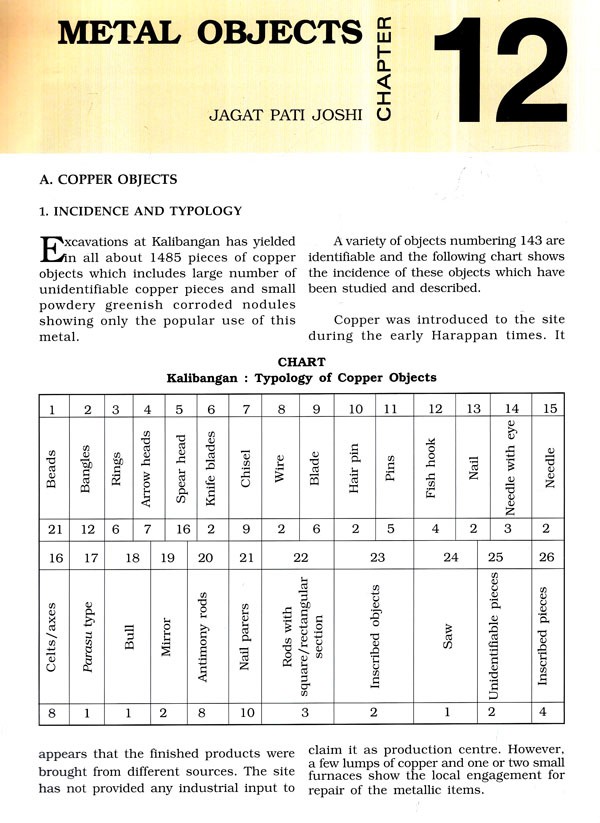 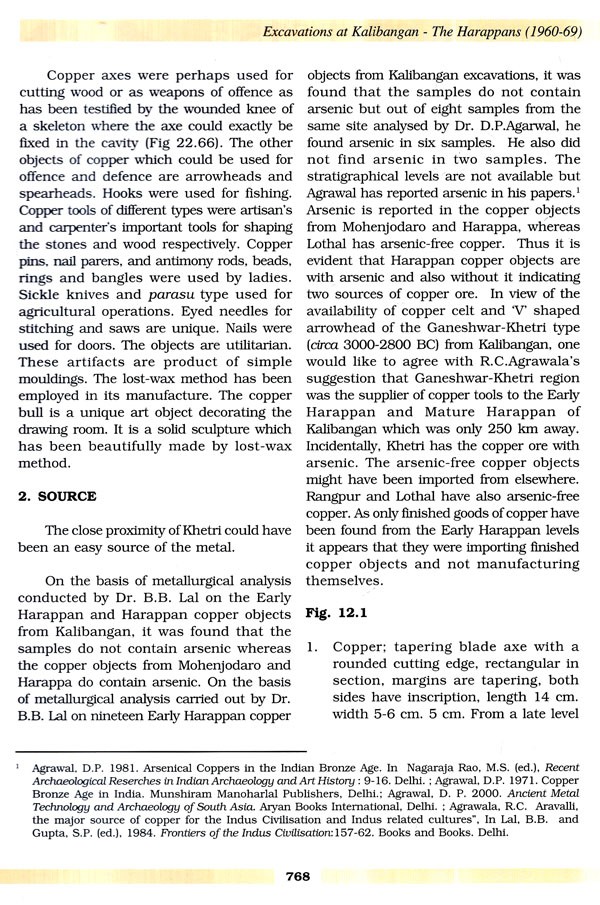 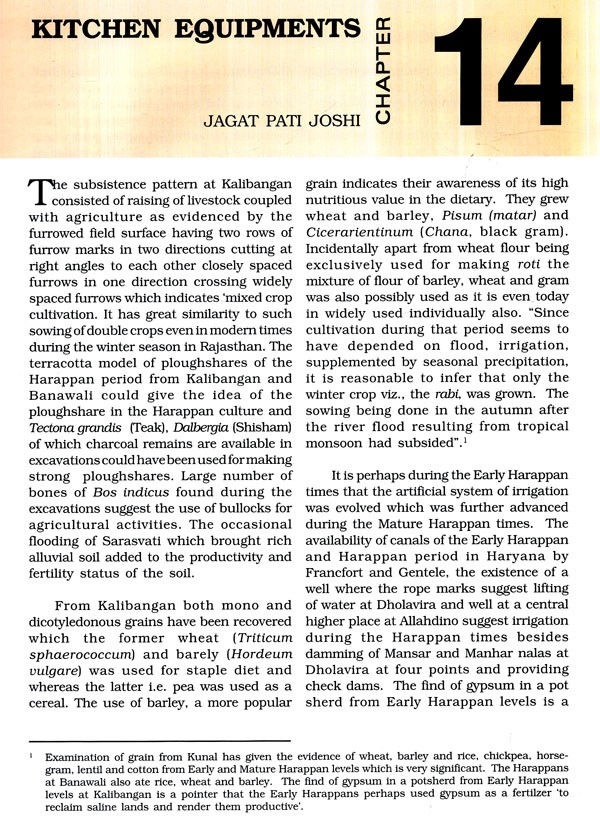 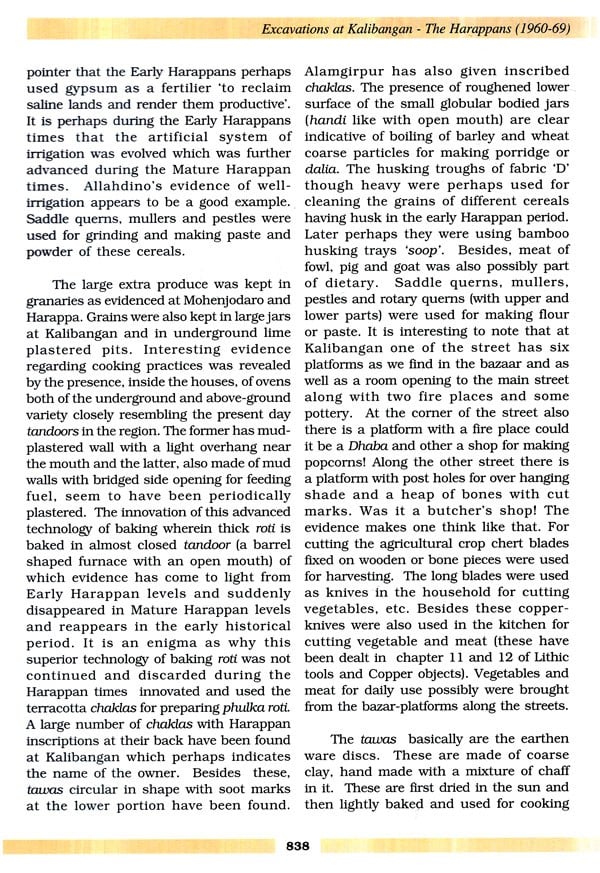 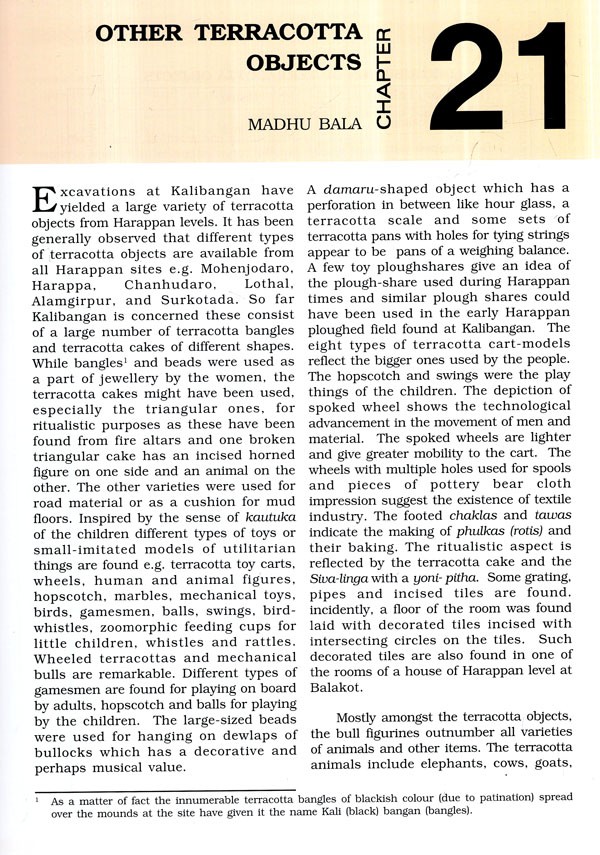 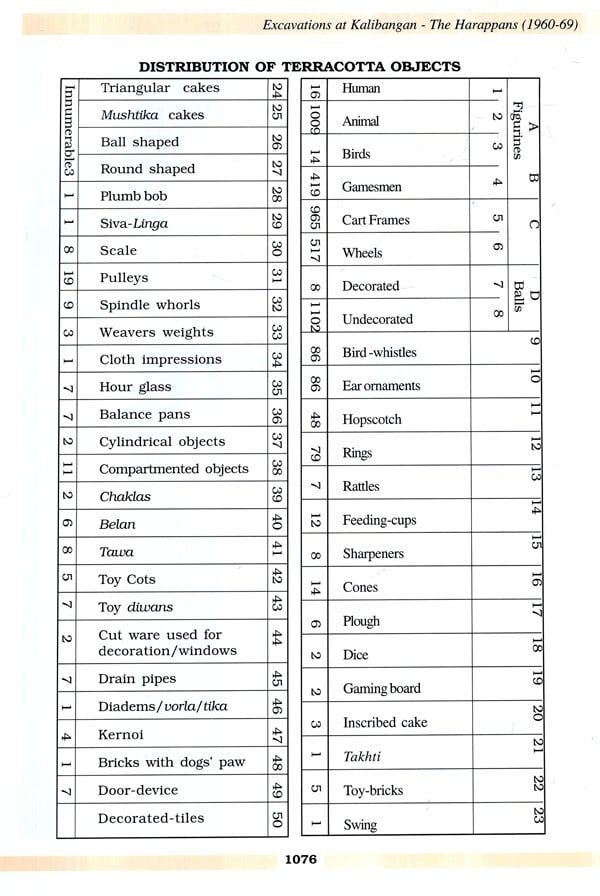 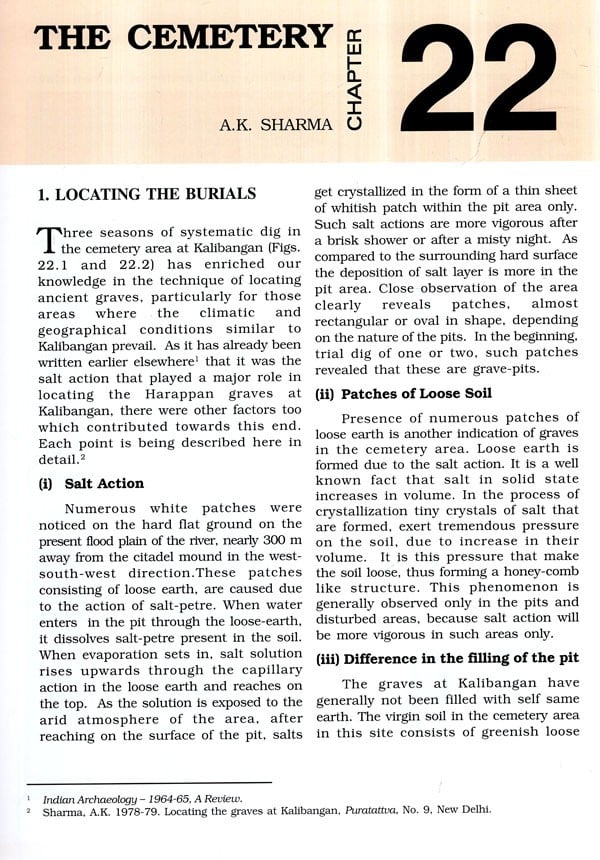 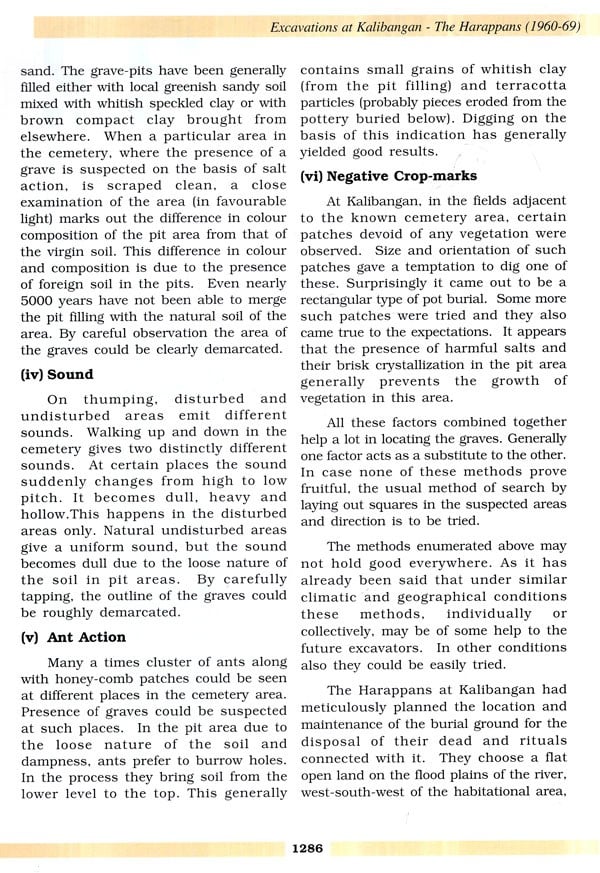 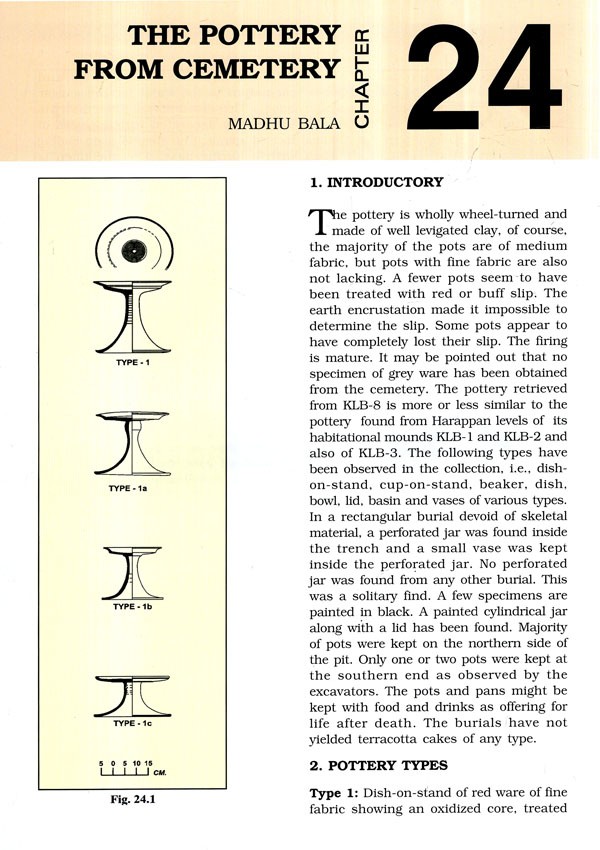 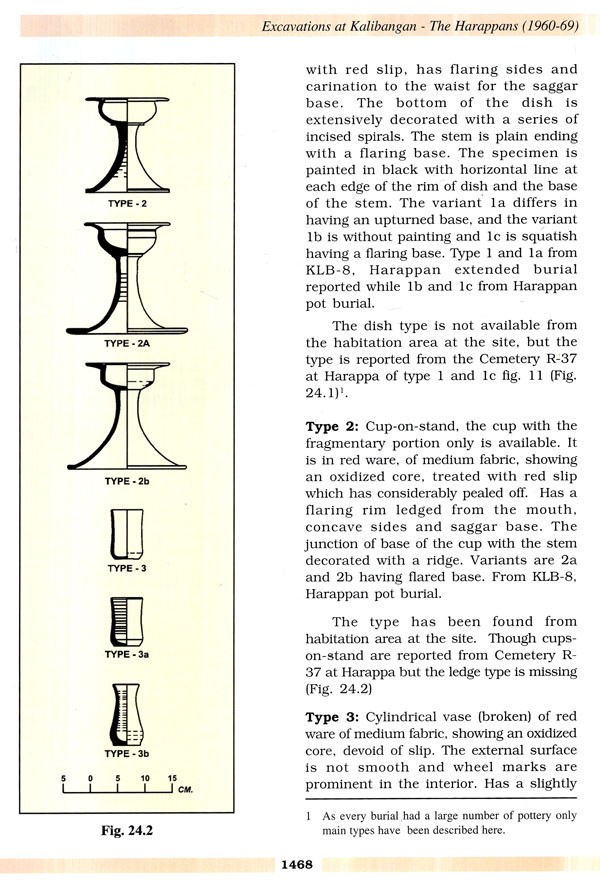 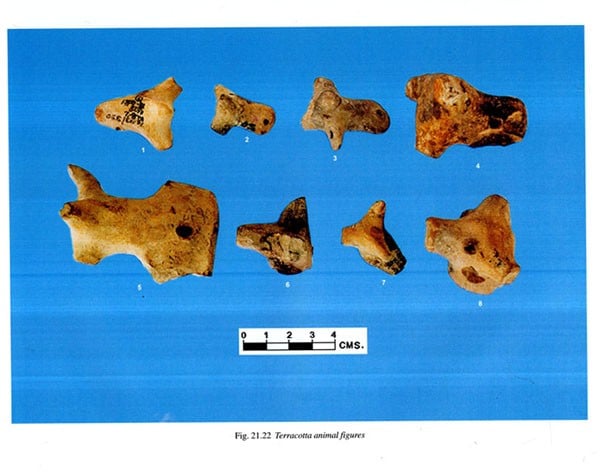 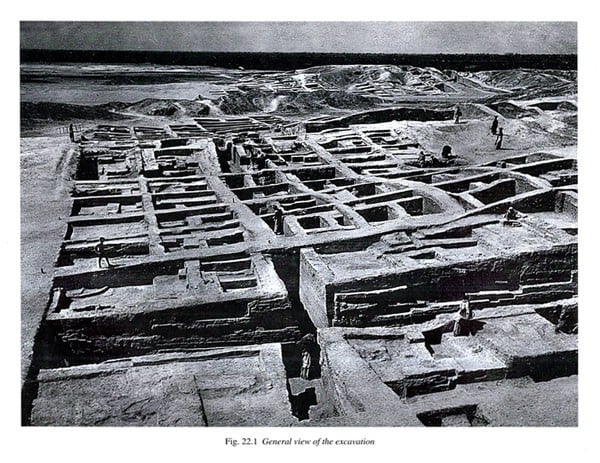