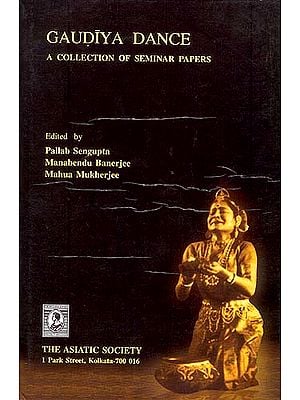 This collection of essays on Gaudiya Dances brings to the notice of scholars a distinct style of dance, hitherto uninvestigated, which is characterized by a beautiful blending of devotional religion and art. Dance, Music and Drama constitute the essential features of Gaudiya Dance. Each of these features form a wholesome symbiosis. This dance seems to have considerably influenced the other classical dances of India. "What is really remarkable is that Gaudiya Dance is essentially a Vaisnava form of dance, the technical aspects of which were explained in a number of scriptural works. The authors of the essays, collected in this volume, have adduced evidence from a variety to the work which, I believe, would be appreciated by the connoisseurs and readers.

Even only a few years back, it was generally presumed that Bengal had no tradition in the realm of classical or Sastriya dances; and only a number of fold-forms were there - some of which are still prevalent - for which we may feel proud no doubt. It was quite nature to form such an idea, for the other Indian classical dance-forms in vogue, such as Bharatanatyam, Manipuri, Katthak, Odisi, Kuchipudi et al., have somehow attained a very absorbing and dominant position in our cultural psyche. But if we try to trace out the course of socio-cultural history of Bengal through the ages, it would be confidently ascertained that, we too had a very rich classical form of dance, full of our own cultural fervour.

However, for a plethora of socio-economic and political reasons, this genre of Sastriya dance of ancient and early medieval Bengal received a set-back. As a natural corollary, the loss of patronage was obvious. After the lapse of few centuries, this form of dance is once again resurrecting itself from the abyss of oblivion within a span of last two decades or so.

After 1947, an urge for searching out a regional cultural identity reared its head all over India; people of some of the states of our country were consequently prompted to claim this or that particular dance-form as 'their' traditional treasure obtained apropos of their 'own' cultural legacy. But Bengal lagged behind in this venture. However, this self-effacing attitude has undergone a sea-change at present. The emergence of Gaudiya Nrtya is but a natural outcome of the same.

There are at present only a handful of people perhaps, who may still remain unconvinced about the artistic subtlety of Gaudiya dance. The number is still les, when the question of its Sastriya authenticity does come up. The delicate nuances, wonderful gaits and emotional expressions that could be found in a Gaudiya dance performance are aptly authenticated by the archaeological and textual evidences and at the same time, in the still prevailing popular dance-forms of the Bengali people. It is one of the most precious treasure treasure-troves of our cultural heritage.

The inherent artistic appeals of most of the genre of India's dances, be it fold or classical, are laid in their resilence. Gaudiya Nrtya is no exception in this regard. It happens to be a composite art-form composed of dance, drama, music, poetic sensitivity and colorful as well as rhythmic expositions. The key-note of this complete harmony is dance, which includes all other art forms, but the total message is not confined within the ambit of external enjoyment only, but to the inner core of the soul of both the dancer and viewer as well. No doubt, originally it had been an ancient form of temple-dance; but after its present revival or resurgence, it could be quite confidently surmised that Gaudiya Nrtya is not an atavistic or antiquated art form, but it is quite fresh and fascinating even now, as it was in the past. It has got a perpetual appeal because of its inherent enduring and enthralling artistic beauty. On several levels and in myriad dimensions, this dance-form has one again achieved a steady and artistic growth and now has become an inseparable part of India's dance scenario.

Under the auspices of the Asiatic society, a two-day National Seminar was held on 9th & 10th February, 2002 to discuss in details all these aspects of Gaudiya Nrtya, where many eminent and young scholars along with the well-known exponents of Gaudiya and other disciplines of dance, formed the conclave. The present volume contains the subsequent publication of the papers read and deliberations made over there. As the medium of the seminar was bi-lingual, the papers concerned were written both in Bengali and English.

In this volume, papers that were presented in English, are being published. Another volume containing the papers and deliberations in Bengali, is also being simultaneously published along with this one.

Before concluding this initial note, we express our sincere gratitude to all who were behind the success of the seminar three & a half years back, and have lent their skill and labour for the publication of this volume at present.