While volumes one and two deal with materia medica and basic principles of Ayurveda, respectively, volumes three to seven cover the diagnosis and treatment of different diseases. Five specialised therapies (Panch-Karma) and Rasa Sastra make part of volumes eight and nine respectively. Besides the original Sanskrit text, all the volumes contain its English translation, extensive glossary of technical terms, various indices, notes and references.

Vaidya Bhagwan Dash , holds graduate and post-graduate qualification in Ayurveda, in addition to Master's degree in Sanskrit and a Doctorate from University of Delhi.

In the course of over thirty years dedicate to research and practice of Ayurveda, Dr. Dash has attended several international conferences and seminars held in Brazil, Mexico and France. He was invited to deliver a course of lectures in Ayurveda at the Patrice Lumumba Friendship University, Moscow and the Australian School of Ayurveda at Adelite, South Australia.

Author of over twenty important publications covering different aspects of Ayurveda and Tibetan Medicine, he has to his credit an English translation and commentary of Caraka Samhita, the most authentic Ayurvedic classic.

Dr. Dash was Deputy Adviser in Ayurveda to the Government of India in the Ministry of Health and Family Welfare till 1981. He has also served the World Health Organisation as a consultant in Traditional Medicines.

Vaidya (Miss) Lalitesh Kashyap , obtained her Ayurvedic degree from the Ayurvedic and Unani Tibia College, Delhi and Ph.D from the K.S.D. Sanskrit University, Darbhanga. She has been actively engaged in Ayurvedic practice and research for the past twenty-five years. She has to her cred several published articles on Ayurvedic drugs, particularly those essential in the treatment of ladies and children. She worked as the Medical Superintendent of the Ayurvedic Hospital, under the Central Government Health Scheme.

In Ayurvedic therapeutics, three categories of ingredients are used, viz, (1) herbal products, (2) animal products, and (3) metals including minerals, gems and costly stones. In the classical age, herbal products were extensively used in all the eight specialised branches of ayurveda including surgery. Metals and minerals were used as therapeutic agents but less frequently. During the post-classical age, practice of surgery and panca-karma (five specialised therapies) was discouraged because of temporal vicissitudes. To cure these surgical ailments and to cure such obstinate diseases for which panca-karma therapies were being administered earlier, intensive as well as extensive research was carried out by ayurvedic physicians as a result of which potent and safe remedies were explored from processed metals including minerals and costly stones. Apart from their therapeutic efficacy in minute doses, these remedies were found very effective for the preservation and promotion of positive health and prevention of diseases. They were found to be very effective as rejuvenating agents (rasayana) and aphrodisiacs. The primary aim of ayurveda is to maintain the positive health of a person the next objective being the cure of manifested diseases. For a person to be called healthy,' according to ayurveda, he should not only be free from physical ailments, but also he should be mentally happy and spiritually elevated. Metals, etc., catered to all these three requirements, viz., physical. mental and spiritual, and therefore, they became very popular among the physicians. Popularity of these metallic preparations has continued uninterrupted till the present age inasmuch, as a new specialised branch (in addition to eight specialised branches described in classics) took its birth. This is called Rasasastra or latro-chemistry.

In the forefront of these metals was mercury. Because of its miraculous rejuvenating and therapeutic effects, it was alluded to be the seed of Lord Siva. To make this metal free from toxicity and therapeutically potent, sixteen different and consecutive steps (samskaras) were evolved. At the end of these sixteen samskaras, the processed mercury has to be tested to ensure its rejuvenating effects on human beings. This test, which is the seventeenth step, is carried out on ordinary metals to which the processed mercury is added in minute quantity and further processed. By this, the ordinary metal gets transmuted into noble metal i.e. gold or silver. Now the rejuvenating effect of mercury is ensured and it can be administered to human beings not only for rejuvenation but also for attaining salvation while still alive (jivan-mukta). Before that, the body of the individual should be purified by the administration of various types of elimination (samsodhana) therapies. This constitutes the last i.e. 18th step (samskara).

It will be seen from the above that the transmutation of base metals to gold and silver is only a method employed to test the efficacy of processed mercury. Thus, alchemy which is considered in the West as a myth, is a fact of reality according to ayurveda. Several saint- physicians adept in this technique have demonstrated their ability in public (for details - vide pp 7-10 of the author's Alchemy and Metallic Medicines in Ayurveda published by Concept, New Delhi in 1986). To prevent, unscrupulous and antisocial persons from getting this knowledge, the exact description of these are camouflaged in written texts, and the exact technique is communicated orally only to trusted disciples after examining them carefully. But it should be clearly understood that alchemy was not the primary aim of these saints; it is only a step to ascertain the ability of processed mercury to rejuvenate the body. Details of these eighteen steps are elaborated in this text, of course in a cryptic manner to prevent their misuse, and these details have given added importance to this last volume of Todarananda Ayurveda- saukhyam Series.

Earlier volumes in this series have dealt with different topics like Materia Medica, Basic Principles, Diagnosis and Treatment of different categories of diseases and Panca karma. The present volume deals with different types of metals, etc., used in ayurvedic therapeutics including alchemy, thus making the whole series a veritable repository and encyclopaedia of ayurveda.

The first chapter of this volume deals with the explanation of various technical terms (paribhasa) including weights and measures used in Ayurvedic pharmaceutics in general and those used in rasasastra in- particular. This provides an elaborate description of various types of weights and measures prevalent in India before this work was compiled. It includes dosage of drugs, use of ripe and unripe fruits, different pharmaceutical processes involved in preparing various categories of recipes, food and drinks, various types of poison, approved substitutes and description of pestle and mortar. In ancient days, services of physician were requistioned in the houses of rich people for preparing medicines. The shares of these prepared medicines to which the physician is entitled because of his labour are also described in this chapter.

The second chapter deals with various types of physical, chemical and pharmacological impurities in mercury. Eighteen different steps (samskaras) of mercury and the instruments and equipments required for that purpose are elaborated in detail in this chapter. The method of extracting mercury from different ores like cinnabar, special recipes like Rasa-sindura and Rasa karpura, and the type of women (kakini) who are to be engaged for assisting in the processing of mercury are described. Sulphur is required to be used in these preparations in liquid form. The process to be followed for reducing sulphur into liquid form is, therefore, described here in detail. Mica with special reference to mythological origin, to its varieties, relative merits of its different types, methods of purification and calcination is described in detail. 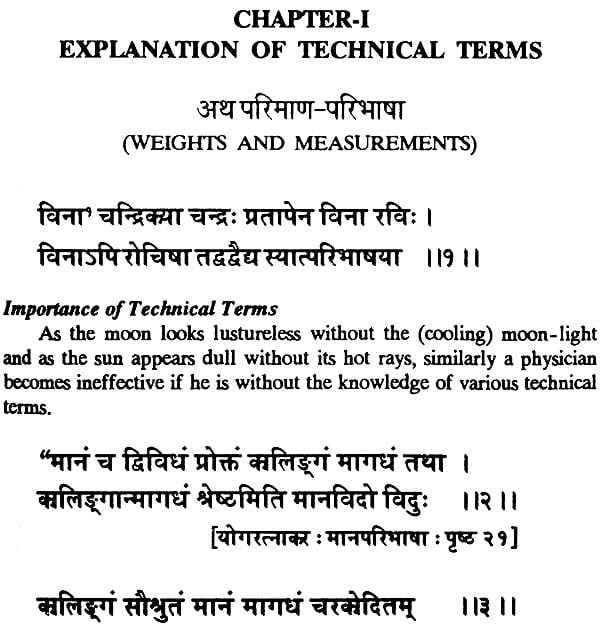 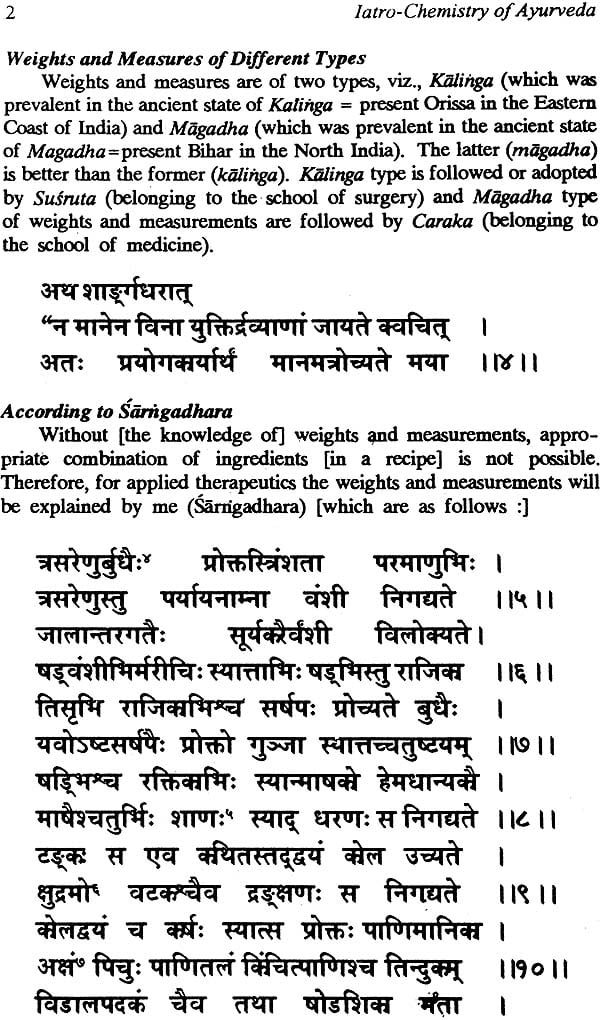 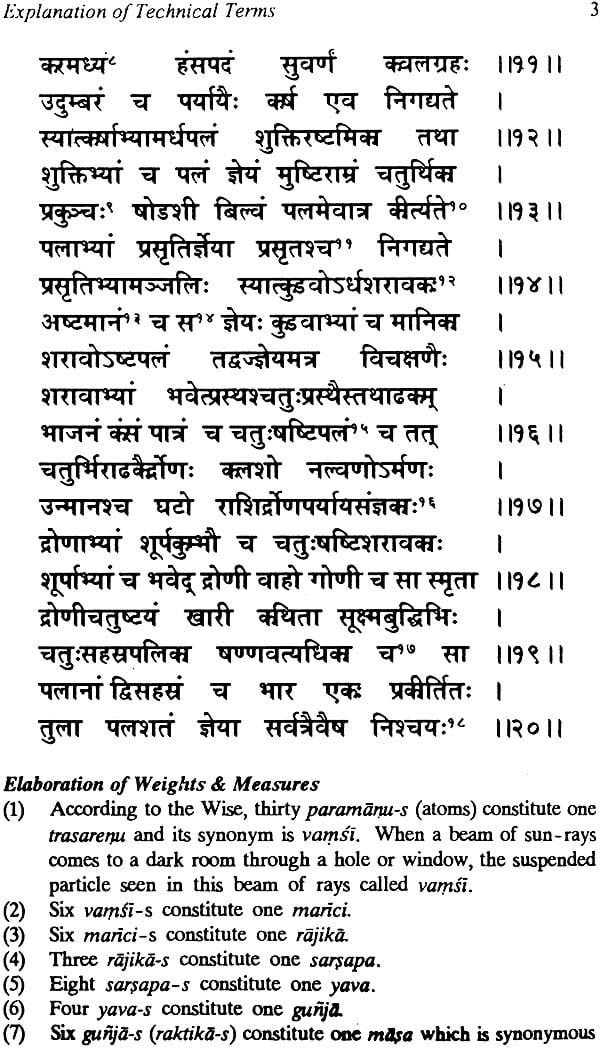 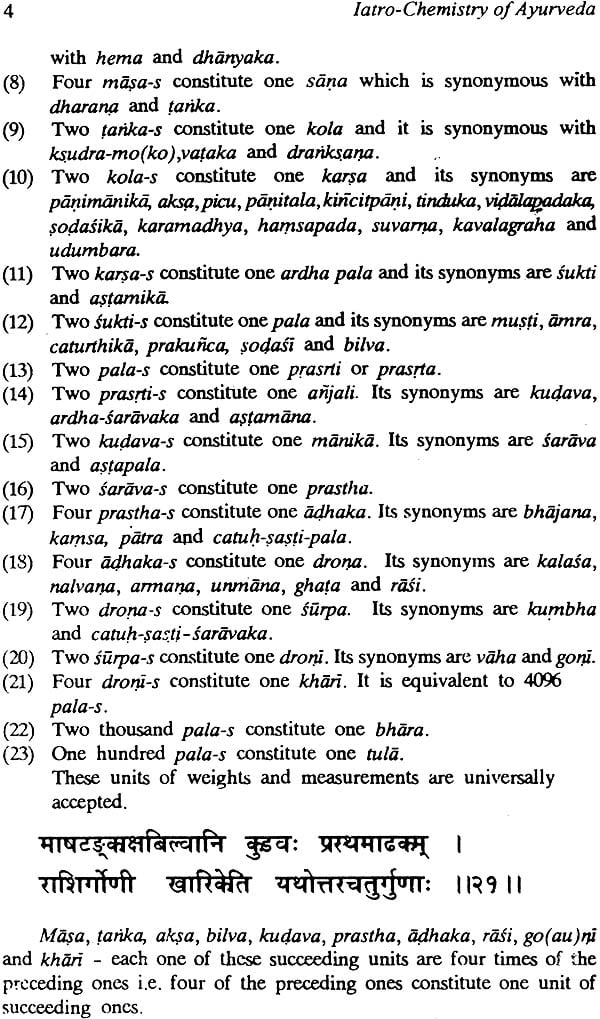 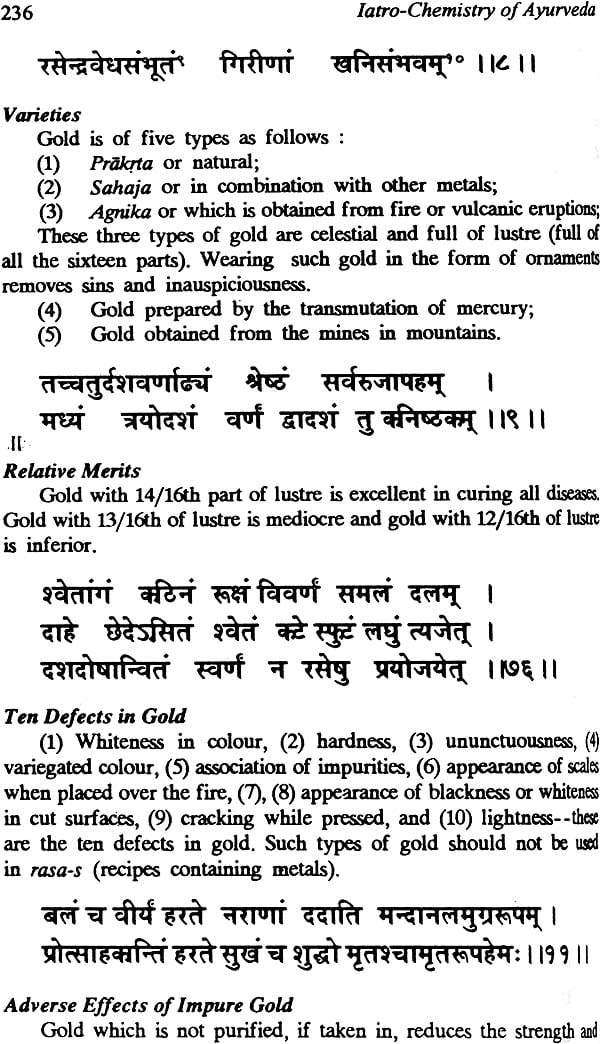 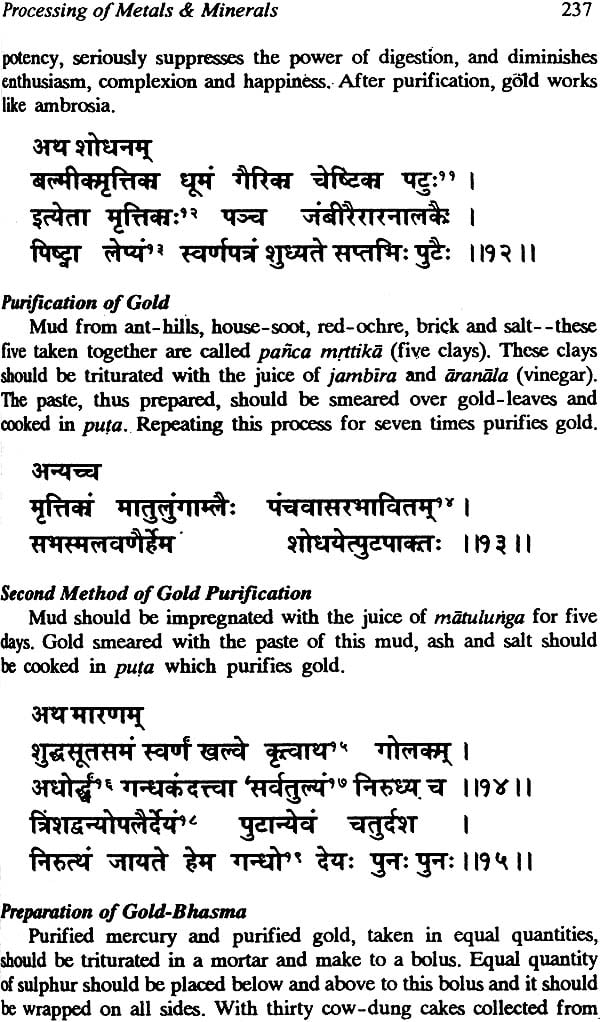 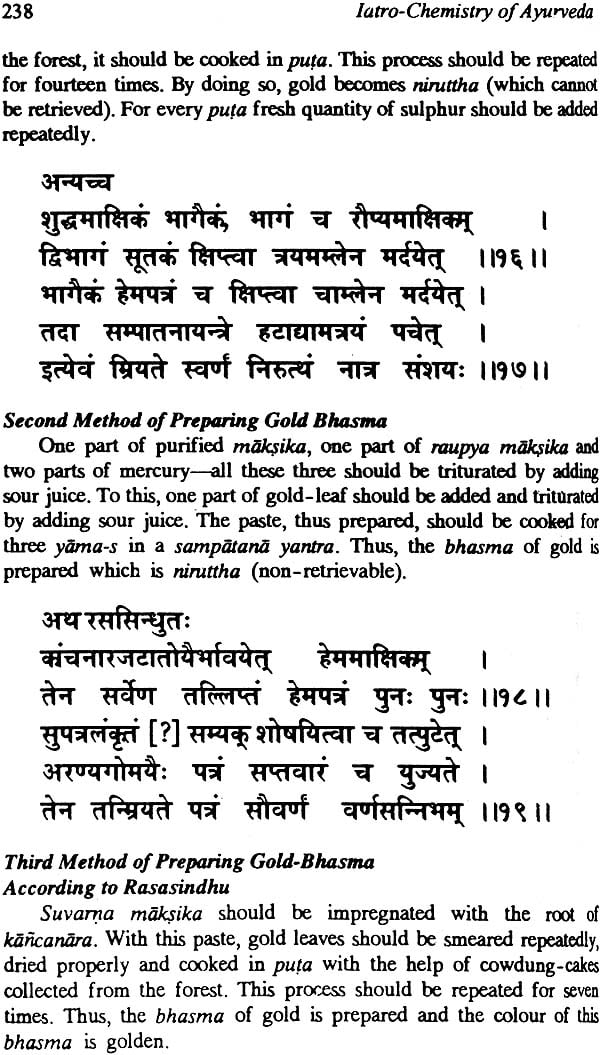 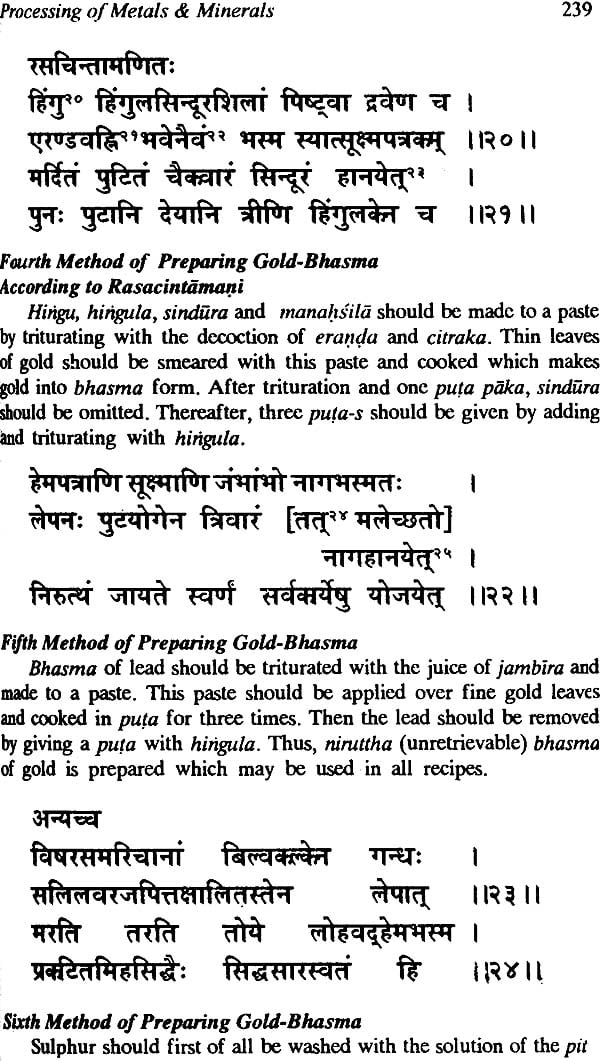 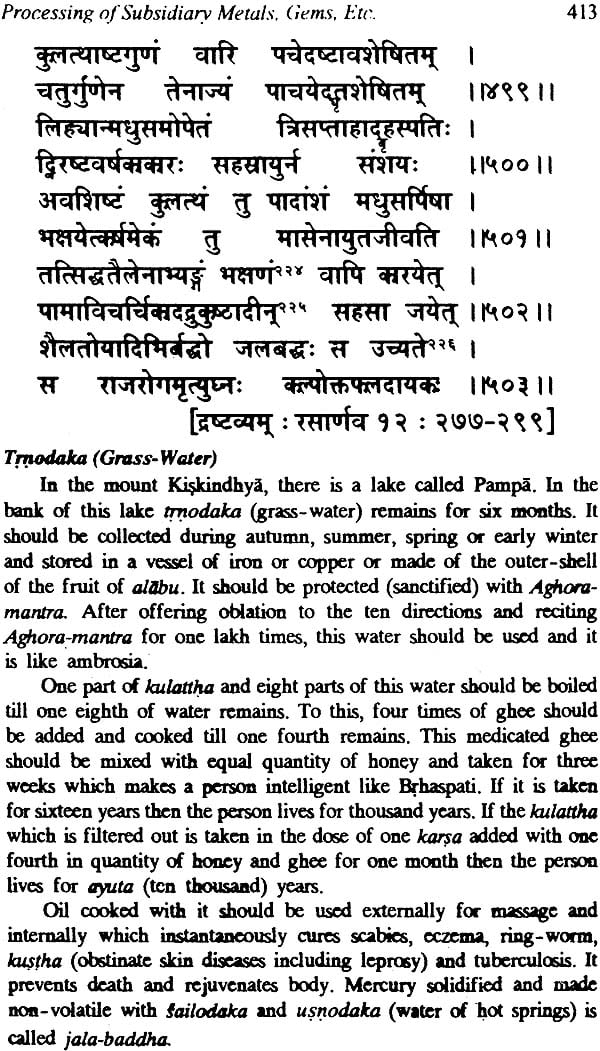 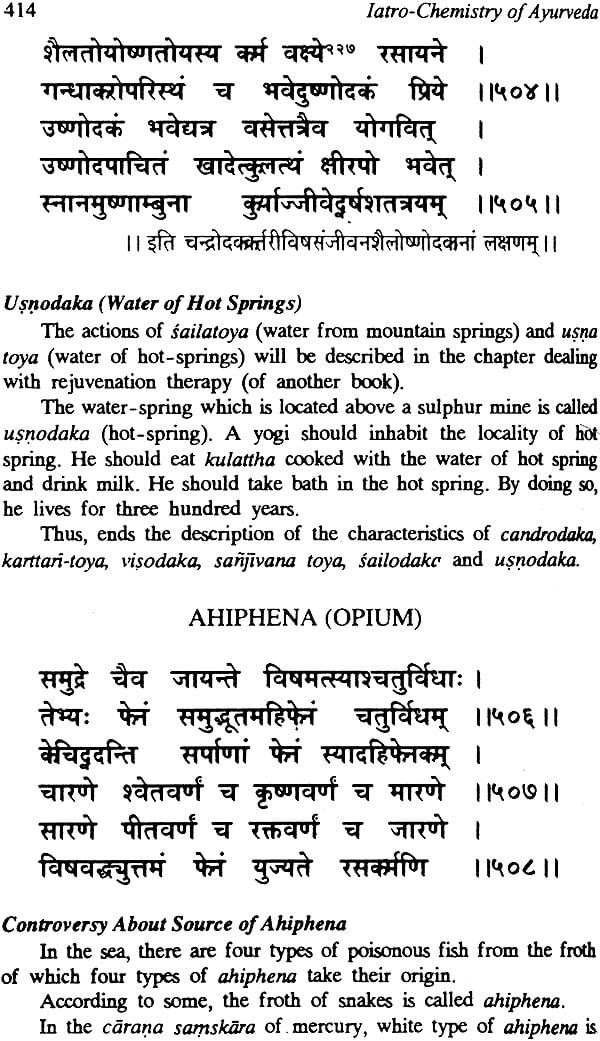 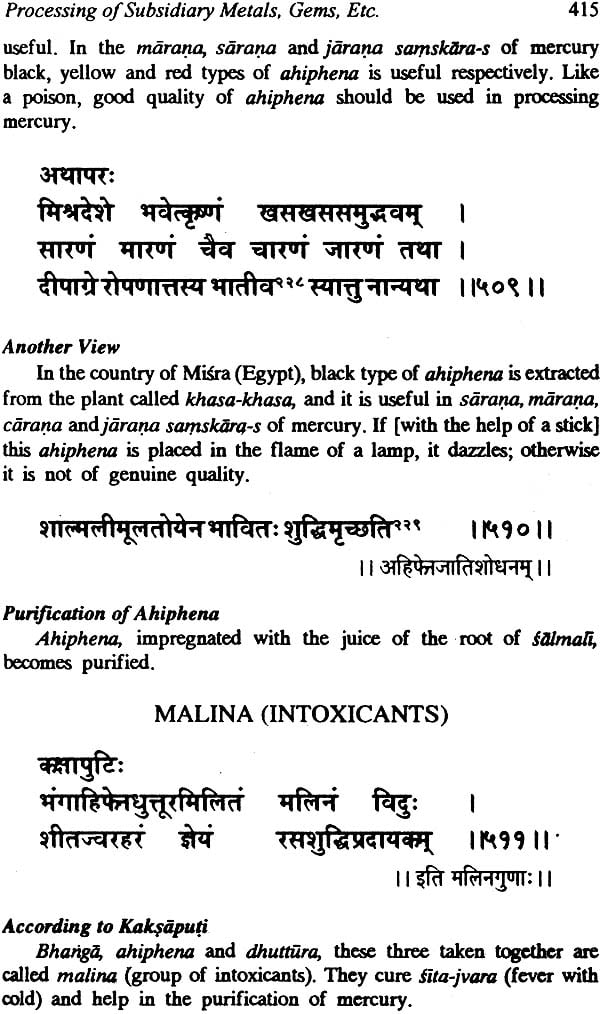 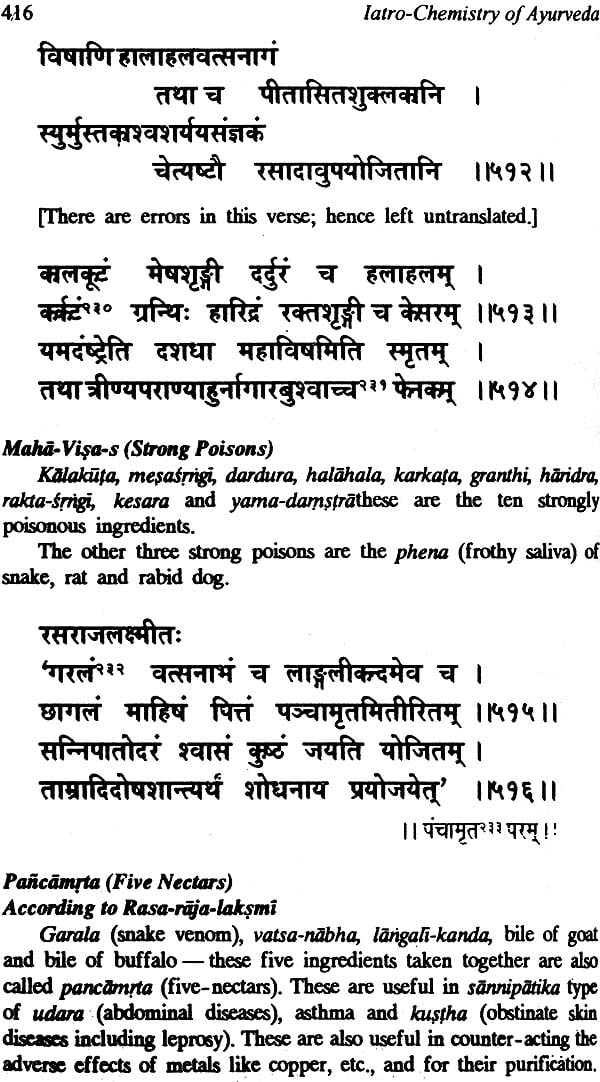 The Wealth of Indian Alchemy and Its Medicinal Uses (Second Revised Edition) (In Two Volumes)
By B. Mukherji
$72
FREE Delivery
Best Seller