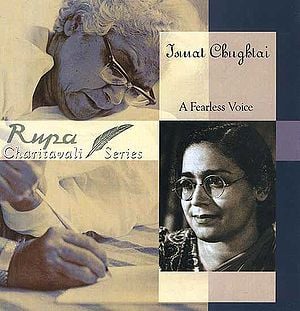 $17.00
Notify me when this item is available
Save to Wishlist Send as E-card Share by Email
From The Jacket

Her bold, uncompromising vision mesmerized her readers. In her writing Ismat Chughtai's courageous voice spoke up for the exploited and forgotten in society - the women and the poor. A true individualist, Chughtai's life was a perfect mirror of her beliefs. At a time when women in orthodox Muslim society stayed silently behind the veil, she stepped out to narrate the story of their lives - including writing on subjects considered taboo by other writers and facing a trial for obscenity for her short story Lihaaf.

Independent. Controversial, outspoken, witty and humane. Chughtai refused o be cowed down by society's disapproval. And her mercurial life and writing has inspired women to question dogma and demand their rights.

These biographies have been written for the reader who is curious about the life, achievements and character of these legends. Full of fascinating stories and facts, written in an easy, story telling style, these biographies will make these great Indians and their times come alive for the reader.

This pen has been both the means of my livelihood and a veritable friend in lone moments. I can call anybody I want on this udankhatola. And when be comes, I can say anything to him make him cry or laugh or reduce him to ashes. If so wan, I can tear him to pieces and destroy him completely. As with a puppet, I can make him dance to my tune. At such a time I feel some of the power of the creator. Almost everybody, with whom I had any interaction, has left his imprint on my mind."

She will be referred to a Ismat Apa or only Apa, in this work - respect being one of the fundamental reasons underlying this familiarity. For I have discovered that if justice has to be done to an individual such as Apa, it cannot be done at the level of formality. Deference is best offered - up, close and personally - and in this case, taking into consideration her unique wit, impatience with fools and love for anything remotely resembling life which is, incidentally, vastly different from her sheer zest for living. He inimitable lifestyle, which could be variously described as being bohemian and free-thinking, lends itself to Apa's individuality.

There is a marked difference between those you remember with awe and those whom you remember from your heart. The former are generally nice, polite souls recalled best with a certain measure of distance. They are the ones whose greatness is obvious at a glance and overwhelms you. But of those belonging to the latter category, there is a certain warmth that creeps in unbidden - you sit up straighter, your eyes turn bright with memories and your voice takes on a tone and tenor reserved for someone dearly loved and your words spill over each other in a rush to be heard first. But most of all, you remember that person as one of your own.

Not one person interviewed for this biography failed to mention Apa,s large-heartedness, her enthusiasm till the very end and her forthright attitude which has been so faithfully recreated in her stories, autobiography and novels.

Unlike other of her ilk, Apa is nothing if not elusive for the pen that seeks to capture her. She is best understood through her own writings. Though the partially autobiographical Tehri Lakeer (A Crooked Line) is considered her masterpiece, her soul resides in the numerous short stories. Stories, churned out of her own experiences and which include real-life characters from within her own circle of family, friends and acquaintances. Her characters leap out of the pages - to shake you, hold you, make you laugh and cry along with them as though they breathe even today. And mere identification with her characters does not take away from the fact that you do so, in spite of them being placed in a very specific milieu and time. The identification is at an emotional level.

Yet, despite Apa's formidable reputation in the literary world, there are those who remain ignorant about who she was, even mistaking her for a man it is to them that this book is addressed. It is an attempt at capturing the essence of a woman who refuses to be contained either in life or in work.