It is very difficult to introduce Shri Swami Shivom Tirthji, because what he appears to our worldly perception and what he really is are two different things. Understanding his inner state, his high spiritual echelon, and his authority is elusive because these attributes are enigmatic and beyond the grasp of a worldly person. Whatever would be said -about him is likely to be incomplete and only fragmentary. Whatever we may be able to know and understand about him will depend totally upon his grace and his willingness to reveal his real self.

One example given by Shri Shivom Tirth Maharaj himself during his discourses applies to him very directly and perfectly. He said that scriptures are like those drops that spill from a full bucket of water (of inner experiences) into which a person merges. The commentaries on the scriptures are like the dust on the roadside that gets mixed with those drops of water. Similarly, whatever we may say about Guruji is like describing those drops of water that get spilled and mixed with the dust on the roadside, The contents in the bucket of water will be known only to himself and the few lucky ones whom he would select to reveal the Self.

His Holiness Shri Swami Shivom Tirthji is a very powerful, capable, Siddha yogi from a lineage of Shaktipat tradition. He has been blessed with the experience of the individual Self and the Cosmic Self, and he constantly dwells in the cosmic joy. People around him get sprinkled with his joy. By listening to his words the aspirant's mind starts an inward journey. At his discourses the audience is listening to his words with their eyes closed in a meditative inward journey, and their faces beaming with ethereal joy. His presentation of highly elevated and complex philosophical concepts is clear, simple, digestible and experiential. At times some people actually experience the spiritual truths and high levels he is describing.

Guruji's gift to serious seekers is priceless. At first he takes his own time to ascertain the earnestness of an aspirant's desire for spirituality. But once he is convinced, his grace is powerful, immediate, direct, bountiful and unfailing. In a few days most aspirants start to uncover and reach inner depths never experienced before. The greatest gift of Swami Shivom Tirthji is the self-propelling or autonomous process of inner cleansing of samskaras (the impressions of past actions and experiences on the psyche) which starts with Shaktipat Initiation. This is followed by a tranquillity of mind that accompanies spiritual progress and eventually the experience of Self ... Sat-Chit-Anand (truth- consciousness-bliss ).

His Holiness Swami Shivom Tirthji is master of Shaktipat-the process of awakening the Shakti or the consciousness of the aspirant inwardly. In the life of Shri Shivom Tirthji the three rivers of sadhana, satsang and selfless service come together, and those who come to him get purified and uplifted by a bath in this holy waters. His love for all is so pure, real and touching that it almost feels as if divinity has touched the heart. His love for everyone and childlike playfulness bring Krishna alive. In his personal meditation the steadiness and bliss on his face remind people of Shiva in human form. The rest of the time Guruji is busy helping people who are engrossed in worldly attachments and afflictions. Ayogye api yogyatamapadya shri gurusuryo bodhati. This means the guru, like the sun, shines over all and makes them worthy and enlightens. 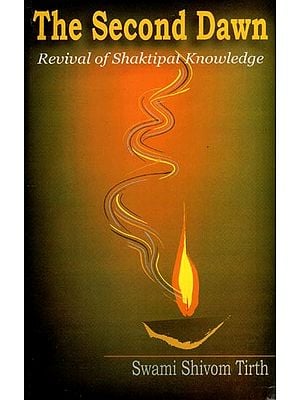