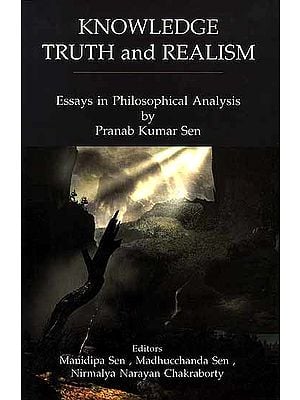 Knowledge, Truth and Realism is a collection of essays written by Pranab Kumar Sen over a period of ten years (from 1989 to 1998). The essays deal mainly with issues in philosophy of Language and Theory of Knowledge from the standpoint of analytical philosophy. They bring forth Sen's realist philosophical Position and his attempt to weave together specific questions concerning meaning, reference, truth, knowledge and objectivity in this realistic framework. By responding to and by making use of the ideas of Philosophers like, Gottlob Frege,Ludwig Wittgenstein, W.V. Quine, Donald Davidson, Peter Strawson, H.P. Grice, Michael Documentt, John McDowell, Sen develops his distinctive theory of meaning and understanding along with his theory of knowledge/knowing. In doing so he also addresses the larger issue regarding the nature of philosophical analysis. The essays are a testimony engagement of the Philosopher with some of the central and contemporary debates in analytical philosophy.

Pranab Kumar Sen (1931-99) was one of the leading philosophers of India. He was Professor and later Professor Emeritus at Jadavpur University, Kolkata. His teaching and research career was marked by a profound engagement with specific questions in Philosophical Logic, Philosophy of Language, Metaphysics and Ontology, Philosophy of Kant, Epistemology and Ethics. He was visiting professor at the University of California, Los Angles, 1977-78, University of Pune, 1990 and Indian Institute of Advance Study, Shimla, 1995. He was Visiting Fellow at Visva Bharati, Shanti Niketan, 1968, All Souls College, Oxford, 1988, and a Senior Fulbright Research Fellow at the Universities of Chicago, California at Los Angles and Berkeley, Harvard, Princeton and Pittsburg 1977-78. Professor Sen has authored two influential books dealing in Analytical Philosophy-Logic, Induction and Ontology and Reference and Truth. He has edited 6 Volumes of Philosophical papers and published a large number of seminal articles in the national and international journals and edited volumes.

Pranab Kumar Sen left an enormous amount of unpublished works, ranging from finished and unfinished articles (in the form of notes) to lecture notes of many courses that he taught during his teaching career spanning over more than forty years. In the present volume, we have collected most of his finished papers presented in various seminars and conferences. This did not require any serious editorial work, since all the essays were complete and ready for publication. We have, however, arranged these essays in a particular order and hence would like to share with the readers our motivation behind this particular ordering.

Sen's active interest in philosophy was wide ranging. He wrote extensively on logic, philosophy of language, ontology, epistemology and ethics. Since the 1950s he was deeply attracted to the analytical tradition and ever since, belonged to this very genre of philosophy. In this collection we focus on two of Sen's most recent areas of interest: theory of meaning and theory of knowledge. Being an ardent reader of Kant (his Ph.D. thesis being on Kant's conception of the self), Sen was always keen on epistemology. But it is really in the last few years of his life that we find him almost singularly concerned with some of the fundamental questions relating to the theory of knowledge. Sen, however, is mostly known for his interest in logic and philosophy of language and for his robust realism.

Sen's interest in philosophy of language, in the early years, mainly focussed on the problem of reference. His work was deeply influenced by the works of Frege, Russell, Strawson, Kripke, Donnellan, Kaplan and later on by McDowell and Evans. Consequently, most of his earlier essays in philosophy of language are on reference. In this collection, we find his essays in philosophy of language centering around truth and meaning. Sen's unflinching commitment to realism involved him in the contemporary debate of realism and anti-realism, which finds its niche in recent theories of meaning. In this endeavour, Sen became interested in the works of Davidson and Dummett. In the last two decades of his life, he worked extensively on meaning, truth and realism. In the three essays in philosophy of language incorporated in this volume, we find him developing his views on truth, the nature of the theory of meaning, and realism. In the essay entitled 'Objectivity', we can relate to his views on moral realism which is a consequence of a particular theory of meaning.

It is Sen's interest in realism that made him address the problem of knowledge anew. While reading Davidson's 'A Coherence Theory of Truth and Knowledge' (the classic paper where we find Davidson bringing his views on meaning, truth and knowledge together), Sen struck upon a new idea about the very definition of knowledge and its bearing on approaches to scepticism via a plausible theory of justification. Sen thought that the traditional definition of knowledge or, to be more precise, the traditional definition of knowing was faulty, as it included the truth condition as one of the necessary conditions of knowing. Sen thought that once we realize the mistake that lies in defining knowledge/knowing in this way, we will be able to silence sceptics by coming up with an acceptable theory of justification, which in its turn would reinstate realism. All the essays on epistemology in this collection, barring the one on our knowledge of our own language, are on this very topic and it is in them that Sen develops his very distinctive vision about knowledge.

In the previous section an attempt was made to show the connection between the various (and, at a glance, seemingly varied) areas of philosophical interest of P. K. Sen reflected in the essays collected in this volume. Here we try to offer synopses of the essays focussing on the questions and problems that Sen addresses in them.

The Paradox of Analysis

The first and the introductory essay entitled 'The Paradox of Analysis' raises the most intriguing question for any analytical philosopher: What is the concept of analysis with which he or she works? Or, what is it that philosophical analysis consists of? After having identified the analysandum of philosophical analysis in more or less neutral terms, Sen considers the possibility of under- standing philosophical analysis as an activity-an activity which results in showing an equivalence between the analysandum and the analysans. But this sort of characterization of analysis, which seems to be the only plausible one, leads to what is known as 'the paradox of analysis'. The paradox is that, analysis, in the sense in which it is taken, is either trivial or incorrect. Sen discusses three alternative solutions to this paradox, and tries to argue how, in spite of this paradox, the concept of analysis can be made sense of.

Some Problems of Knowledge

'Some Problems of Knowledge', which was in the form of three lectures, has two rather long sections (a) Definition of Knowledge and (b) Justification of Knowledge, followed by a comparatively shorter section (c) Forms of Knowledge. The first section, though beginning with the more familiar account of knowledge embodied in the JTB thesis, raises certain questions that strike a blow to the core of the classical account of knowledge. Sen, instead of addressing the sorts of problems raised by Edmund Gettier regarding the sufficiency of the three conditions of knowledge, asks the question whether these three conditions-belief, justification and truth conditions-can be shown to be individually necessary for knowledge to take place. In the first section, Sen addresses these three issues one by one and tries to show that they are genuine questions requiring serious considerations. 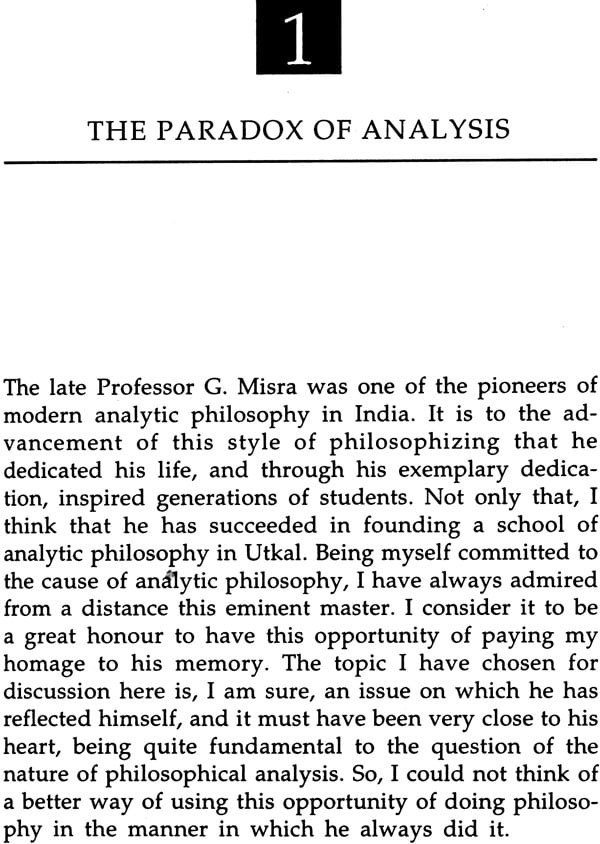 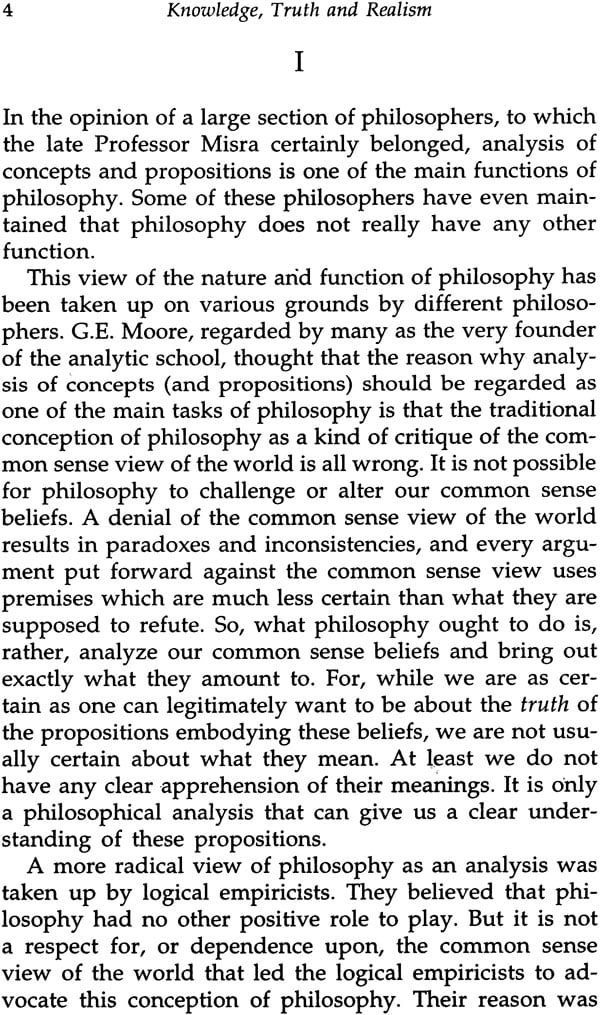 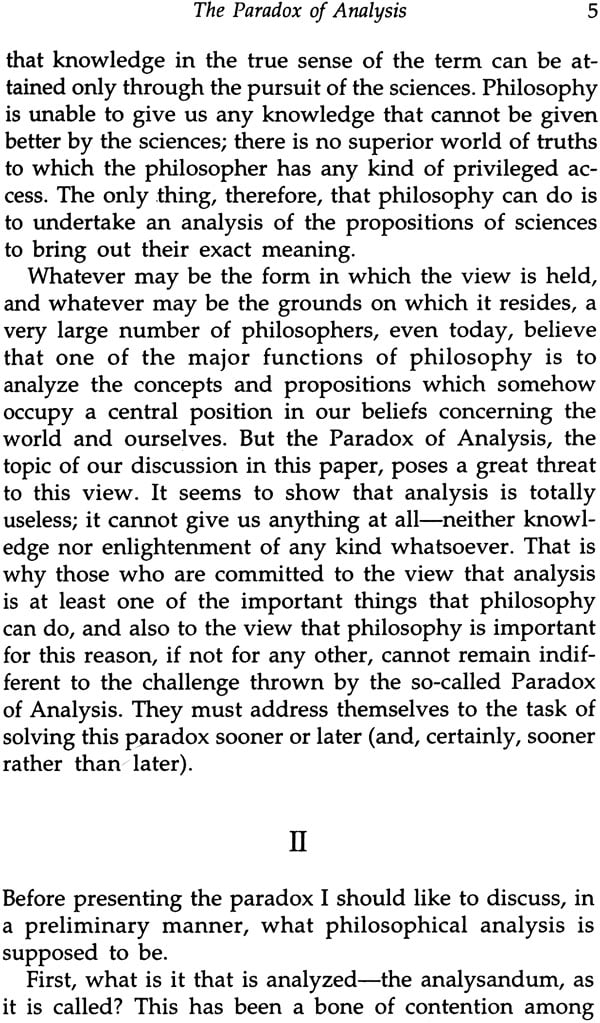 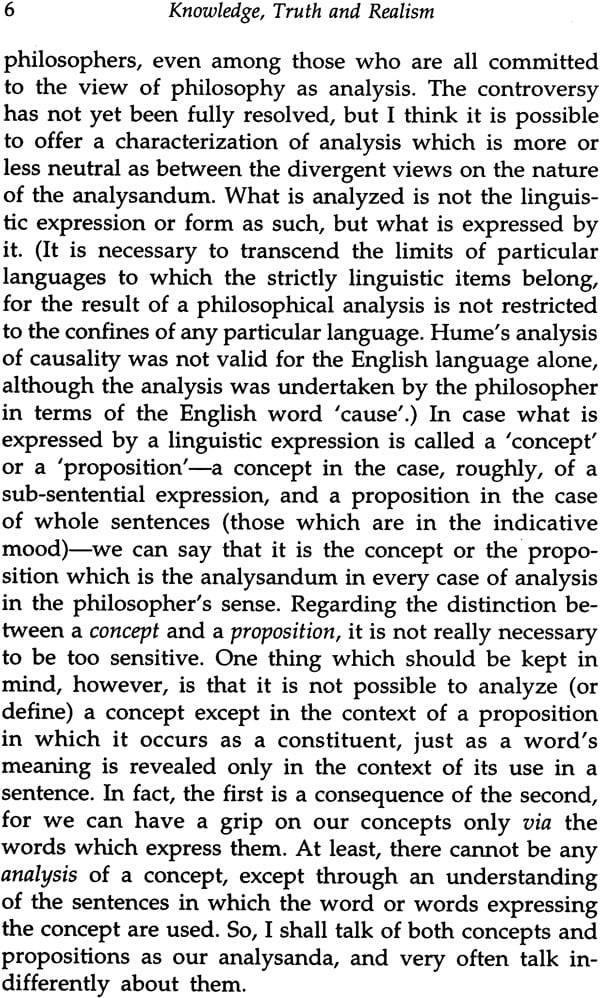 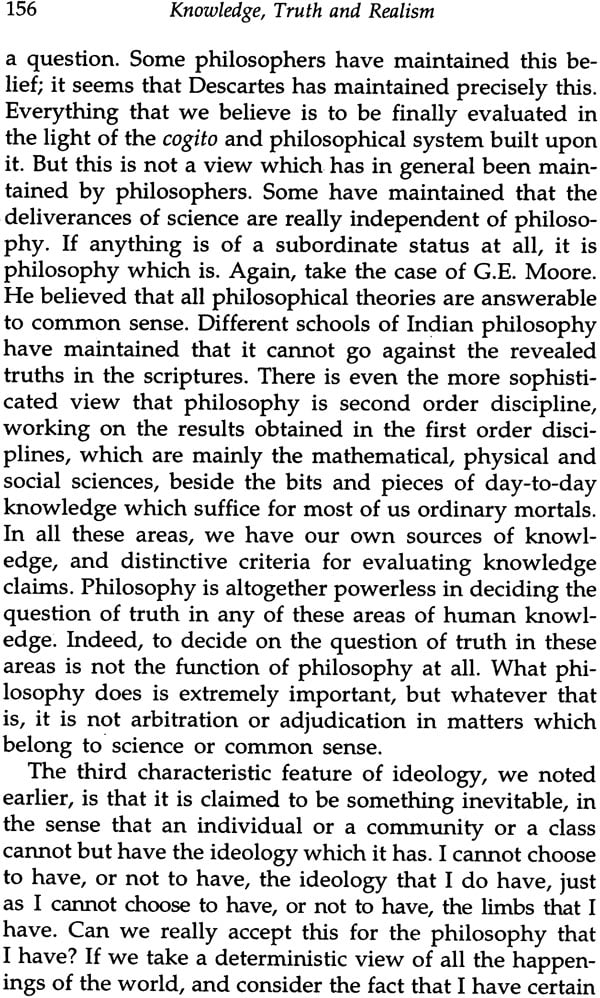 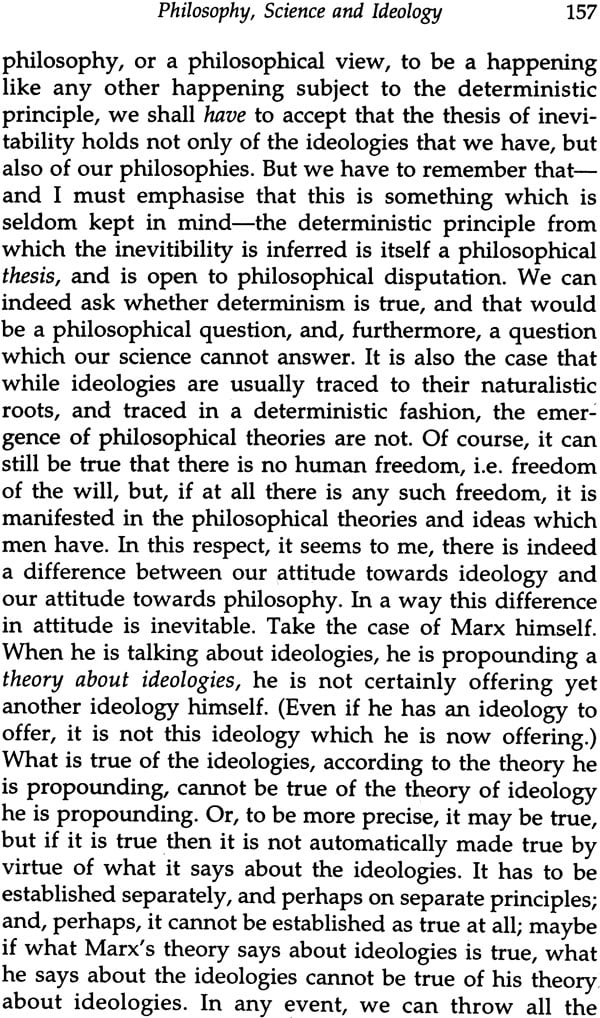 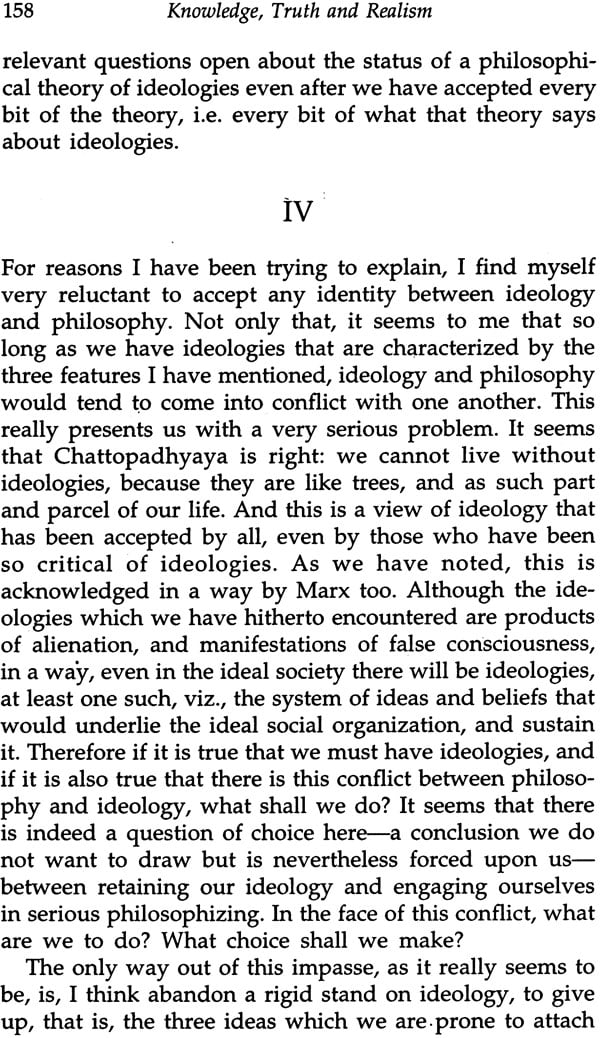 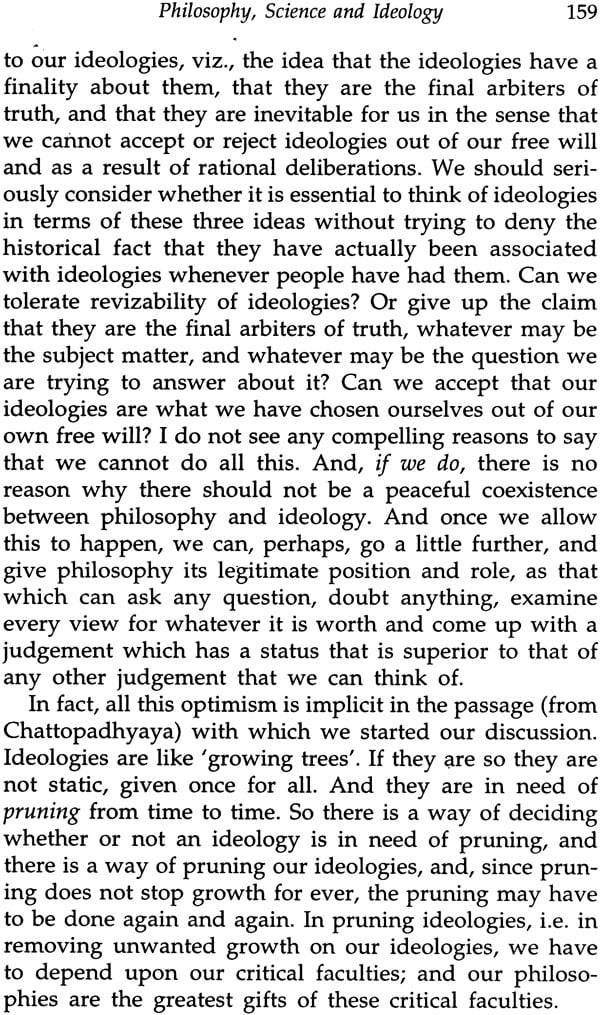 The Flaming Feet and Other Essays (The Dalit Movement in India)
By D.R. Nagaraj
$36.00

Materialism and Immaterialism in India and the West: Varying Vistas
By Partha Ghose
$72.00

Vedanta or the Science of Reality
By K.A. Krishnaswamy Iyer
$36.00 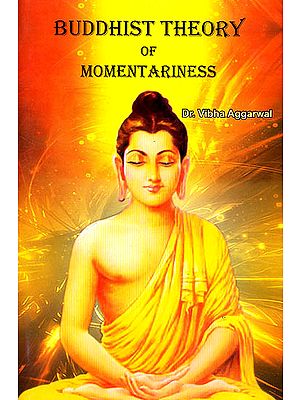 Buddhist Theory of Momentariness (A Case Study of Ksanabhangasiddhi of Ratnakirti)
By Dr. Vibha Aggarwal
$20.00 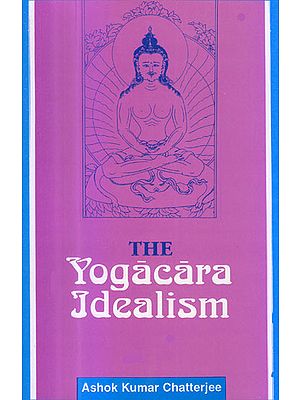