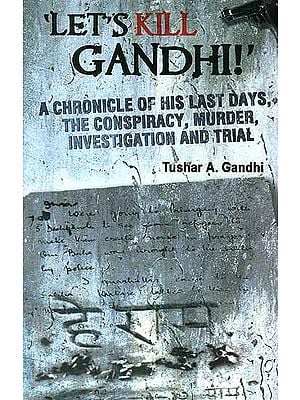 Let's Kill Gandhi: A Chronicle of his last days, The Conspiracy, Murder, Investigation and Trail

$62
Quantity
Notify me when this item is available

Fully insured
About Of Author
Tushar A. Gandhi (b.1960) is the great-grandson of Mohandas and Kasturba Gandhi, and the grandson of their second son, Manilal, and wife Sushila. In 1996 he discovered an urn containing the ashes from Gandhi's funeral pyre, forgotten in the strong room of the State Bank of India, Cuttack. He secured permission from the Supreme Court and immersed them in the Triveni Sangam on 30 January 1997.The same year he founded the Mahatma Gandhi Foundation, of which he is currently the managing truetee.

In 2005,he commemorated the 75thanniversary of the Dandi Kooch, by organising a re-enactment of the 241-mile long walk. He walked the entire stretch and was instrumental in getting the prime minister to declare the route from Sabarmati Ashram to Dandi a historic heritage route.

Tushar currently lives in Mumbai with his wife Sonal and children Vivan and Kasturi.

From the jacket ON 30 JANUARY 1948 MAHATMA GANDHI. FATHER OF A NEWLY LIBERATED INDIAN NATION. WAS MURDERED BY A HINDU EXTREMIST.
Since then, many lies have been passed off as truths, half-truths have been mixed with true incidents and passed off as whole truths.

'Gandhi was responsible for the partition'; 'Gandhi sheltered Muslims and abandoned Hindus'; 'Killing Gandhi was the only way to save India'; these were, and even today are, some of the statements propagated by Hindu extremists and followers of Godse to justify Gandhi's murder.

This book has been written to put the facts straight. Written by Gandhi's great-grandson Tushar A. Gandhi,' Let's Kill Gandhi!' deals with facts gleaned from a lot of verbal history, from archival material, from the records of the murder trial and investigations, from books written by the defence lawyers and judges, from newspaper reports and from what Tushar grew up hearing in the family.

Nowhere in the history of political murders has such a nexus of human errors, procedural foul-ups and sheer apathy colluded to allow a bunch of bungling amateurs to so easily succeed. This book is a chronicle of a conspiracy that goes beyond Nathuram Godse, Gandhi's murderer. Foreword

On 30 January 1948, Mahatma Gandhi, father of the newly liberated Indian nation was murdered by a Hindu fanatic.

Since 30 January 1948, various groups have circulated their own, and often unfounded, theories about his murder. Many lies have been passed off as truths; half-truths have been intermingled with true incidents and passed off as whole truths. Nathuram Godse, the murderer's act has been glorified by saying that he did it from a sense of outrage at Gandhi's pro-Pakistani stance to the detriment of Hindus. 'Mahatma Gandhi was responsible for Partition'; 'Mahatma Gandhi was sheltering Muslims and had abandoned Hindus'; 'If Mahatma Gandhi was allowed to live he would harm the cause of the Hindu Rashtra', 'Mahatma Gandhi forced the Indian Government to pay Pakistan Rs. 55 crores'; 'Mahatma Gandhi turned a blind eye to the sufferings of the Hindu refugees and pampered the Muslims who had stayed back at the time of the Partition'; Killing Gandhiji was the only way to save Bharatmata'; these were, and even today are, some of the lies propagated by the followers of Godse and the Hindu far-Right to justify his murder.

But are they True? A generation of Indians has grown up believing them to be true. The silence of the Gandhians, who always turned the other cheek whenever Gandhi was attacked, has strengthened this belief further. Does anyone know that there were four recorded attempts on Gandhi's life before the last two on the 20th and 30 of January 1948? Four of the five failed attempts were made at a time when Pakistan was not even on the agenda of the Muslim League. All the four attacks were made by the extreme Right-wing upper caste Hindus of Poona; three of the four attempts on his life were made y the Narayan Apte-Godse Gang, and Nathuram was caught in two of those attempts.

On 20 January a crude bomb was exploded by a Punjabi refugee, Madanlal Pahwa, during the evening prayer meeting at Birla House. After he was arrested, Madanlal confessed to being a part of a gang conspiring to kill Gandhi. He confessed that the leaders of the gang were from Poona and that one of them was the editor and publisher of Hindu Rashtra and Agranee, Marathi language periodicals published and printed by Godse and Apte. Madanlal led the police to room 40, at Marina Hotel, in Delhi, where the gang leaders had stayed before the failed attempt on the 20th. The police found unclaimed laundry from the room, which bore the initials N. V. G., Nathuram Vinayak Godse. They also found a copy of the then-not-yet released press statement of the secretary of the Delhi Hindu Mahasabha.