Swami Lakshmanjoo was born in Kashmir on the 9th of May, 1907. Swamiji was a leading light of the twentieth century who revived Kashmir SaivaDarégana through his teachings and discourses. He was the last in the unbroken lineage of Saiva masters, who dedicated his entire earthly life to its propagation. "Light on the Doctrine of Krama" is an English translation of "Srikramanaya-pradipika", a short treatise on Krama, written by him in 1958. In his book, the doyen of Kashmir SaivaDarégana brings Kalisastra to light, describing the twelve Kalis, as given in the Kramastotra and the Tantraloka. In doing so, he presents the twelve sequential states of yoga for the highest of yogis (one who is endowed with the miracle of Turiya in the three states of wakefulness, dreaming and dreamless sleep). According to him, human effort of oneself is incapable of gaining the twelve-fold nature of this Para state. Only the Tivrasaktipata of Paramesvara and the grace of the Guru are capable of making known the experience of this state.

Arijoy Bhattacharya is an artist and writer based in New Delhi, India. Having obtained his BFA in painting from College of Art, New Delhi in 2009, he studied at the School of the Museum of Fine Arts (S.M.F.A.), Boston, till 2010. Drawing from diverse influences ranging from Continental philosophy to Indian metaphysical traditions, his art explores reciprocity and mimesis. His other interests include music, poetry and the principles of combat.

Swami Lakshmanjoo’s Srikramanaya-pradipika is a splendid treastise on Krama, which is the most enigmatic of the doctrines of the Uttaramnaya (Northern transmission), with its origin in the Uttarapitha (Northern sacred seat) in Oddiyana (Swat Valley, Pakistan), and its perpetuation as a living tradition in Kashmir, India.

Written in Sanskritized Hindi during the winter of 1958 under a vow of silence, the usage of language here is as ornate as it is beauteous. It presents the twelve Kalis as sequential states of consciousness, through explanations of the verses of the ancient Kramastotra, attributed to Siddhanatha, that are substantiated with slokas, mostly from the Utpala Stotravali and the Tantraloka, by Utpaladeva and Abhinavagupta respectively.

There is also a consistent effort throughout this text in bringing out the profound content of the fourth chapter (Saktopaya) of the Tantraloka in an elucidated manner.

Swamiji wrote this book out of the necessity of preserving this subject from being lost in oblivion, as such an effort had not been made by the preceding Saiva saints of Kashmir, although the slokas of the twelve K4lis were read as part of their self-study, leading to them being restricted to very few Saiva readers.

This translation aims to bring to the fore this book to those for whom Hindi is inaccessible. It is sincerely hoped that this effort will make this important text more widely known to a readership conversant in English. 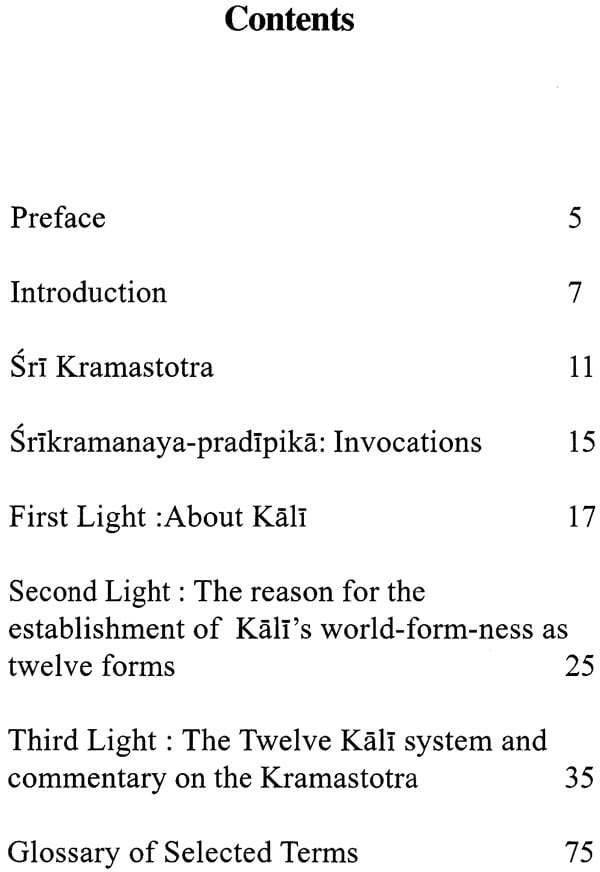 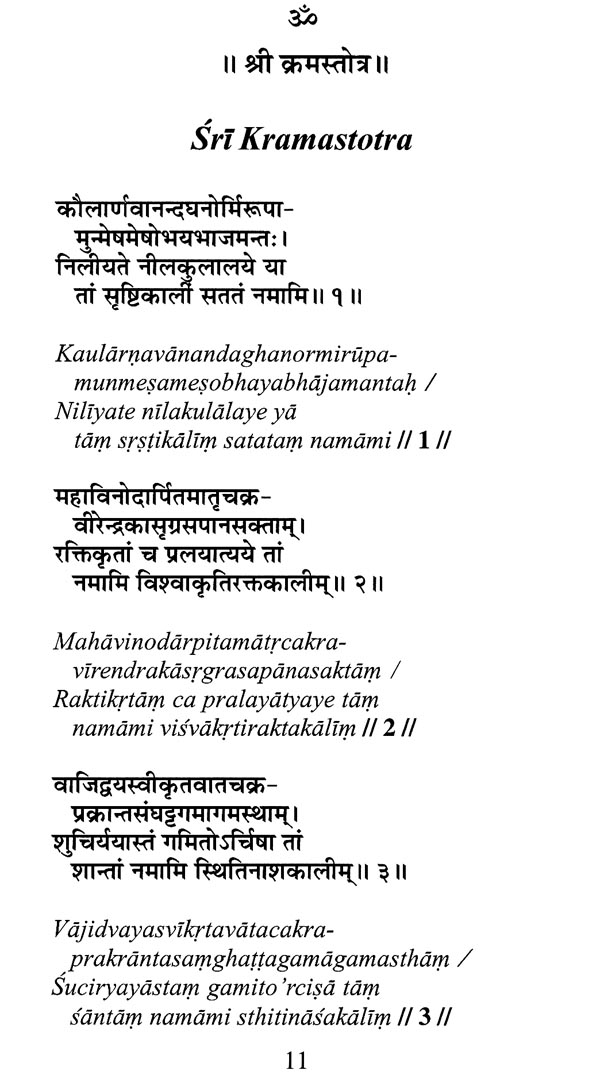 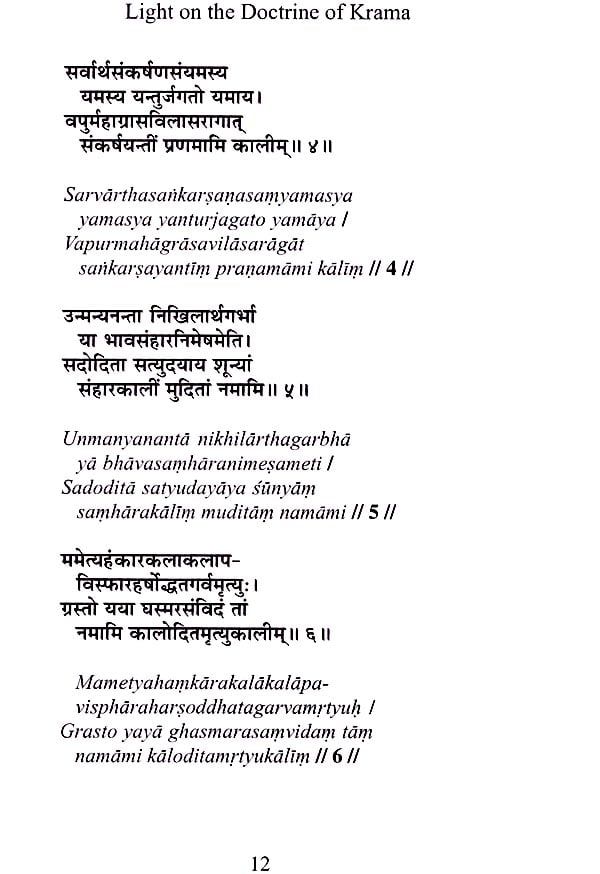 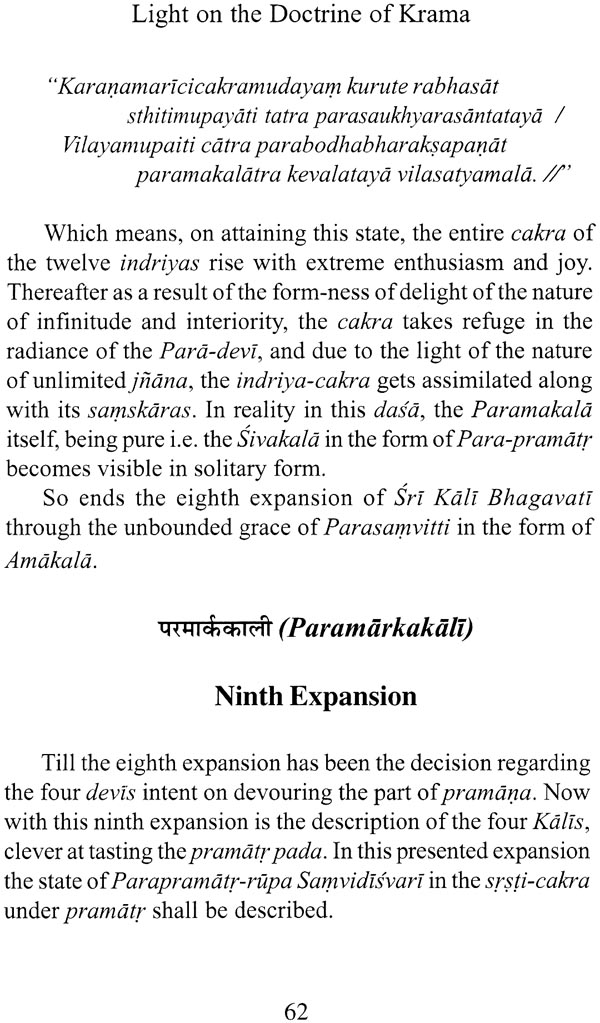 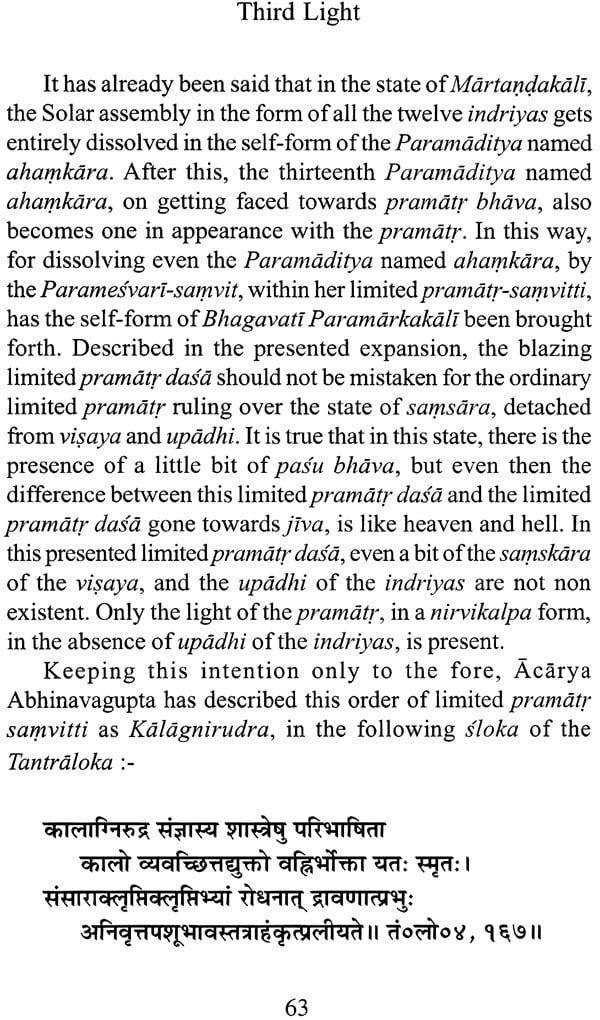