Lured by Hope: A Biography of Michael Madhusudan Dutt 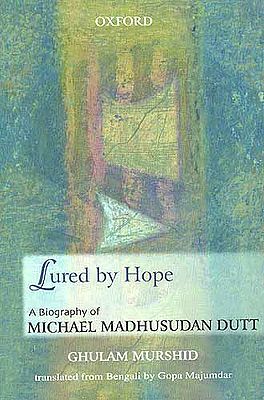 $32.50FREE Delivery
Usually ships in 15 days
Notify me when this item is available
About the book

Michael Madhusudan Dutt (1824-73) is one of the greatest figures not just of Bengali but also of modern Indian literature. Ghulam Murshid's biography of Dutt is unique in that it provides, with ample evidence of tireless research, a fres insight into the colourful yet tragic life of this intriguing writer and poet.

As a modem classicist, Dutt treated traditional mythological material in a manner that lay it open for generations to re-read and reinterpret: Meghnadbadh Kabya, the nine-book epic, is often regarded as his masterpiece. As a lyric poet, his poems about Radha and Krishna were a major advance, in feeling and form, on the medieval Bengali Vaishnav literary tradition. And, as a dramatist, he laid the foundations for modem Bengali tragedy and comedy. Dutt has also left behind a sequence of a hundred and two sonnets composed in Bengali, and innumerable letters which he wrote in English, which throw open a window to nineteenth- century Calcutta.

Although other critical and biographical studies of Dutt's life have appeared in the past, most were based on hearsay and contained gaps in the biographical record, as well as textual flaws, especially in Dutt's English letters and the English poems he wrote before turning to Bengali. Ghulam Murshid is the first biographer to show the close relationship between the life and the works of Dutt.

This translation of Michael Madhusudan Dutt's biography will make his scholarship and insights more accessible to a wider circle of readers.

Ghulam Murshid is an established writer and an ex-professor of Bengali, Rajshahi University, Bangladesh. He currently lives in London.

Gopa Majumdar is a professional translator who has over 15 translations to her credit. Her translation of Bibhutibhushan Bandopadhyay's Aparajito was recently awarded a Sahitya Akademi prize.

Michael Madhusudan Dutt (1824-73) is one of the greatest figures not just of Bengali but of modern Indian literature. While his masterpiece, the nine-book epic Meghnadbadh Kabya, is by every definition a classic, it is also a daringly modern work. It is modern in that it takes traditional, mythological material (the war between Ravana and Rama over Sita) and treats it in a new and unique way; it is a classic in its debt to classical epic poetry, both Indian and Western, and in its potential for being reread and reinterpreted by each generation. A literary classic is never frozen in time: Dutt's contemporaries would not have read Meghnad in the way we do now, and in a hundred year's time, readers will read it differently again.

In his other works too, Dutt was a path-breaker. His lyric poems about Radha and Krishna were a major advance, in feeling and form, on the medieval Bengali Vaishnava literary tradition. His Birangana Kabya was an unprecedented fusion of the West and the East, with its use of Ovid's Heroides as the model for portraying pining or deserted women from Indian mythology. As a dramatist, he laid the foundations for modern Bengali tragedy and comedy. As the first writer of Bengali sonnets, he left behind not just a few experiments but a sequence of hundred and two sonnets, unrivalled ever since. As an inimitable letter-writer in English, he threw open a new window on to nineteenth-century Calcutta.

Dutt was enthusiastically served by his 'primary biographers', Jogindranath Basu (1893) and Nagendranath Som (1921). They incorporated into their books numerous letters and documents, and recollections by Dutt's friends. Many other critical and biographical studies in Bengali followed, and in 1963 Kshetra Gupta brought out an annotated edition of Dutt's letters. But a wider appreciation of his life and works beyond Bengal had been wanting due to an unfortunate lack of books on him in English. There were, moreover, gaps in the biographical record, mistakes that had been repeatedly handed down (such as the notion that Henrietta, with whom Dutt lived after his marriage to Rebecca broke up, was French), and many textual flaws, especially in Dutt's English letters and the English poems that he wrote before taking to writing in Bengali.

In overcoming these gaps and imperfections, Ghulam Murshid has been a tireless pioneer. In the highly praised Bengali version of this biography (1995, revised 1997), he established, through exhaustive research in the SPG papers at Rhodes House in Oxford, the India Office Library and Records in London, Gray's Inn, the municipal archives in Versailles, and elsewhere, the details of Dutt's studies at Bishop's College, the exact identity of Rebecca and Henrietta, the course of his six years in Europe and his late, ill-fated career as a barrister. By amassing such a wealth of detail, Dr Murshid was able to connect Dutt's life with his works more intimately than any previous critic or biographer. Through his scholarship, we can now link Dutt's play Sermista with his personal life, find fully confessional self-knowledge in his celebrated ode Atma-uilap, identify allegorized portraits of Rebecca and Henrietta in Birangana Kabya, and relate the theme of sin in Meghnad more closely to his conversion to Christianity than had previously been acknowledged.

To make Dr Murshid's scholarship and insights available to a wider circle of readers, an English translation of his biography was essential; and in this he has been fortunate to secure the skills of Gopa Majumdar, the leading contemporary translator of Bengali prose, whose brilliant translation of Bibhutibhushan Bandyopadhyay'sAparajito was recently awarded a Sahitya Akademi Prize.

Ms Majumdar has wisely not attempted to translate the Bengali text of the biography in every detail, since anyone requiring that level of documentation would be able to read it anyway. Instead, she has gone for readability and vividness in English, for Dutt's personality, for the colourfulness as well as the tragedy of his life, rather than the literary analysis and meticulous footnoting that characterize the Bengali text. But nothing in the broad thrust of Dr Murshid's interpretation of Dutt's career-and in the very real personal sympathy he brings to his book-has been lost.

Combined with the new edition of Dutt's English letters that Dr Murshid has prepared-closely annotated, textually accurate, and including a number of letters from the collection of Dr R. K. Das Gupta that have not been published before-this biography marks the beginning of a new era in the appreciation of Dutt's achievement. From now on he will belong not just to Bengalis, but to India and to the world.