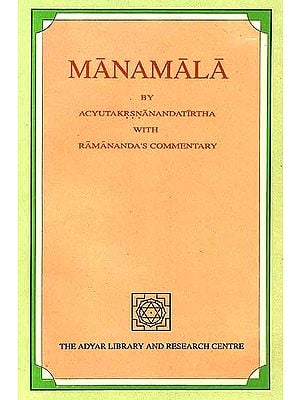 The Manamala of Acyuta Krsnananda is a short work of 45 Anustubh verses on epistemology of orthodox schools of Indian philosophy in general. Pandit V. Krishnamacharya edited it with the available Vivarana commentary of Ramananda Bhiksu for the first 20 verses, and the editor's own commentary for the rest in ALB, 1951. this was also issued as a separate pamphlet (No. 26). Now S. Revathy, Lecturer in Sanskrit, University of Madras has made an English translation and expository notes bases on the commentaries. This is published in ALB, 1993. We have great pleasure in issuing both these in a single volume as pamphlet No. 46 in the Adyar Library Pamphlet Series.

The text and the incomplete commentary by Ramananda Bhiksu were edited on the basis of a unique manuscript in the Adyar Library. The author Acyuta Krsnanandatirtha was a follower of Samkara's Advaita and has many works to his credit. He was the pupil of Svayamprakasananda Sarasvati; another pupil of the teacher was Vedanti Mahadeva who wrote the visnusahasranamatika in Sam 1750 (equivalent to 1694 A. D.). So Acyutakrsnananda must have flourished in the second half of the seventeenth century.

Among the other works of Acyuta Krsnanandatirtha are:

1. Krsnalankara commentary on Siddhantalesasangraha.
2. Vanamala commentary on Taittiriyopanisadbhasya.
3. Bhavadipika commentary on Bhamati.
4. Commentary on Bhasyaratnaprabha of Govindananda
The expository notes give prominence to the Nyaya approach also. This may be helpful to students to get a comparative picture. Those who are interested in delving deeper into Advaita epistemology can refer to the Vedantaparibhasa of Dharmaraja-dhvarin published by the Adyar Library with English translation and notes by S. S. Suryanarayana Sastri.