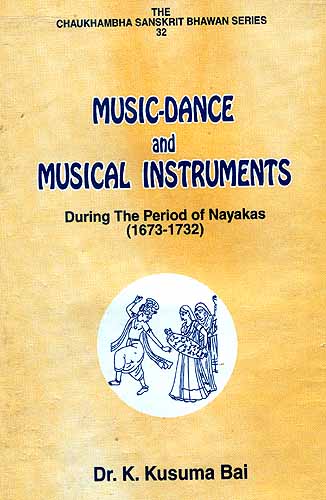 We are happy to bring out the English version of Music-Dance Forms and Musical Instrumentsduring the period of Nayakas. This book is a boon for scholars interested in learning literature related with ancient Hindu music, dance and musical instruments.

The basic fundaments of above mentioned subject are explained with systematic approach in a nice manner in this book. Further the book also gives the relevant information like origin, utility and gradual development of music, dance and musical instruments. It is also stressed that the development of Sangeetham and Natyam in Andhra Pradesh with special reference to the period of Nayakas in Southern part of India.

Dr. Kusuma Bai is well known for her valuable contributions in the fields of Telgu literature, Linguistics, Philosophy, ancient culture and ancient sciences . During the last 22 years she has written on various aspects of above mentioned faculties, particularly literary aspects of Telugu language.

Born in a small town Kavali in Nellore Dist. in the family of traditional former, she gradually acquired highest degrees in Telugu language pertaining to literature, music, dance and musical instruments of ancient culture.

At Present she is in the post of Associate Professor, in the Dept. of Telugu for post graduate studies, in Osmania University, Hyderabad.

Nine books were published for her credit which are related to the above mentioned subjects.

Dr. Kusuma has been participating actively in different national and international conferences related to the above mentioned subjects.

CONTENTS
Add a review
Have A Question