This book aims to serve the aspiring Gaudiya Vaisnava sadhaka to more effectively practice their central activity: sankirtana. Sri Caitanya Mahaprabhu is the foundation of the Gaudiya school, and the one who established its primary focus on sankirtana. To expand and encourage the practice of sankirtana, many Gaudiya acaryas wrote collections of songs beautifully describing the names, forms, qualities and divine activities of Sri Krsna with His devotees. We have collected many of these in this book. While other Vaisnava schools place great emphasis on deity worship, Sri Caitanya's school places the greatest emphasis on sankirtana. Thus, for a Gaudily, the importance of songbooks such as this cannot be over-estimated.

In the first part of Tattva Sandarbha, Sri Jiva Goswami presents a detailed analysis of Vedic sastra, with the conclusion that Srimad Bhagavata Purana is the most important and practical scripture for understanding both Absolute Reality and the process leading to direct experience o it. He then shows that Bhagavata Purana depicts the supreme goal of life as the attainment of love for krsna, and the means to attain that goal as bhakti. There are various aspects of this process, but the most efficacious practice in the present age of Kali is kirtana. According to sukadeva Gosvami, one can attain perfection merely by performing kirtana:

“O King, Kaliyuga is the storehouse of vices, but it has one great quality: Merely by performing Krsna-Kirtana one can become free from material bondage and attain the supreme goal [krsna prema]”.

Sukadeva also adds that kirtana bestows whatever benefit one could attain by meditation in Satyayuga, by ceremonial sacrifice (yajna) in Tretayuga, or by elaborate temple worship in Dvapararayuga. Therefore, wise people who understand the essence of sastra appreciate Kaliyuga.

“In the Age of Kali, Bhagavan appears within this world with a non-blackish complexion and constantly sings or describes the names of Krsna, accompanied by His associates, servants, weapons, and confidential companions. Those endowed with discriminating wisdom worship Bhagvan in this form primarily through the sacrifice of kirtana, involving the totality of one’s being”.

To stress the importance of sankirtana, Sri Suta Gosvami ends his narration of the Bhagvata by praising nama sankirtana:

“Nama sankirtana destroys all sins from the root. I bow down to Hari, for doing so quells all suffering. “

It is well known that Sri Caitanya Mahaprabhu initiated the sankirana movement and popularized it in India. Indeed, sankirtana is the hallmark of the Gaudiya School. Many of our acharyas wrote padyavalis, virudavalis, vijnaptis, stotras, and prarthanas, describing the name, form, quality, and divine play of Krsna and His devotees. Other Vaisnava sampradayas lay great stress on vigraha seva (deity worship), but the Gaudiy School lays foremost stress upon sankirtana and nama japa.

Keeping this in view we have comjpiled the present song Book for the use of our students and friends. The songs and prayers contained in this book are the compositions of our great teachers. We have also included some important prayers and songs from Srimad Bhagavata Purana, which are highly recommended by Sri Jiva Gosvami in Bhakti Sandarbha. We render the verses according to the edition of the Gita Press. We hope that devotees will appreciate this effort and make use of this booklet in the service of Sri Krsna. 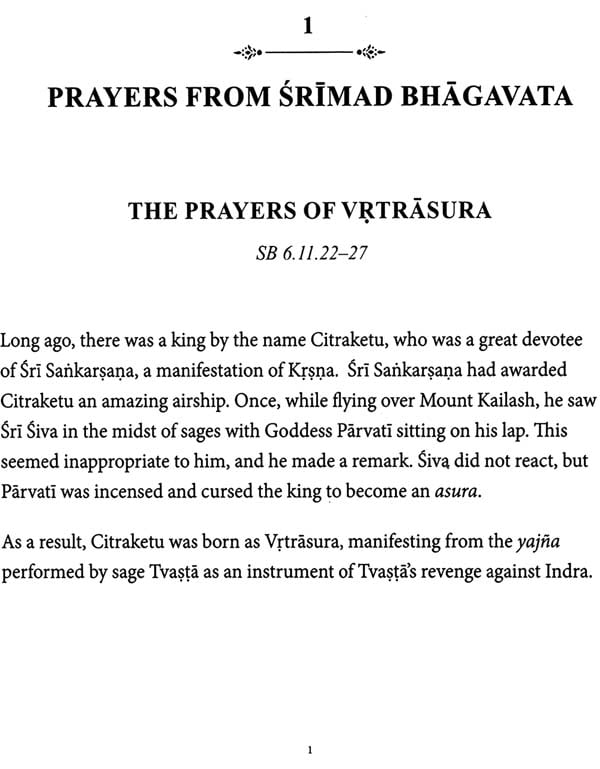 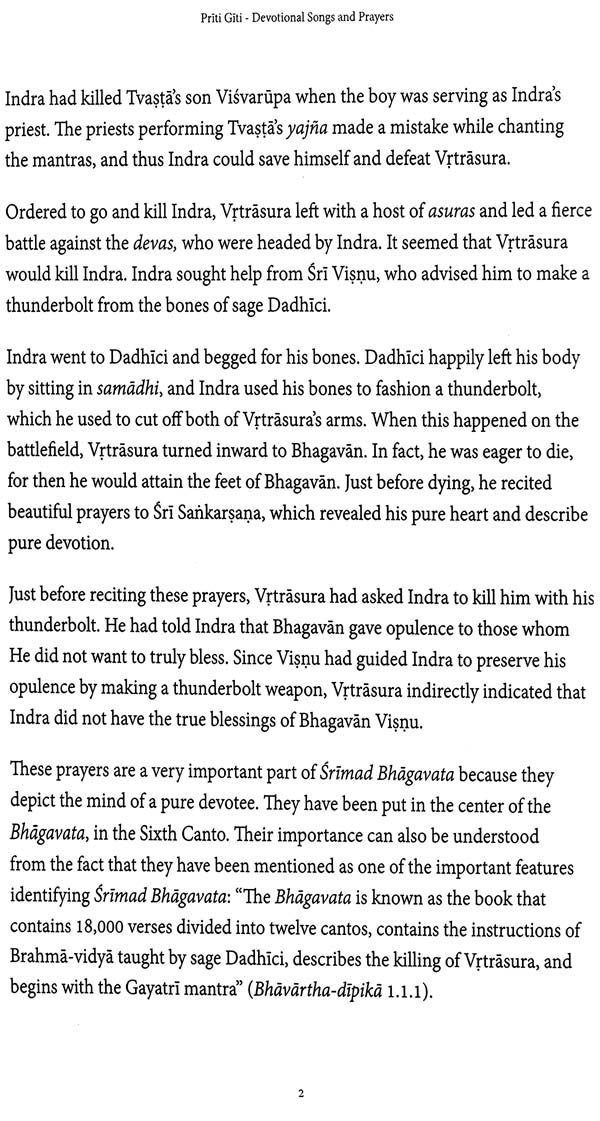 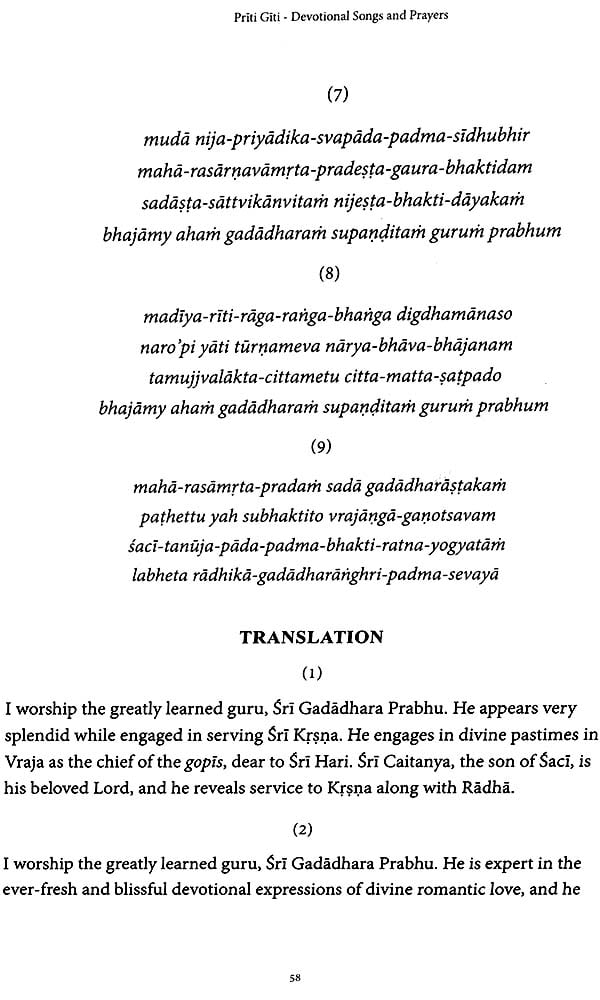 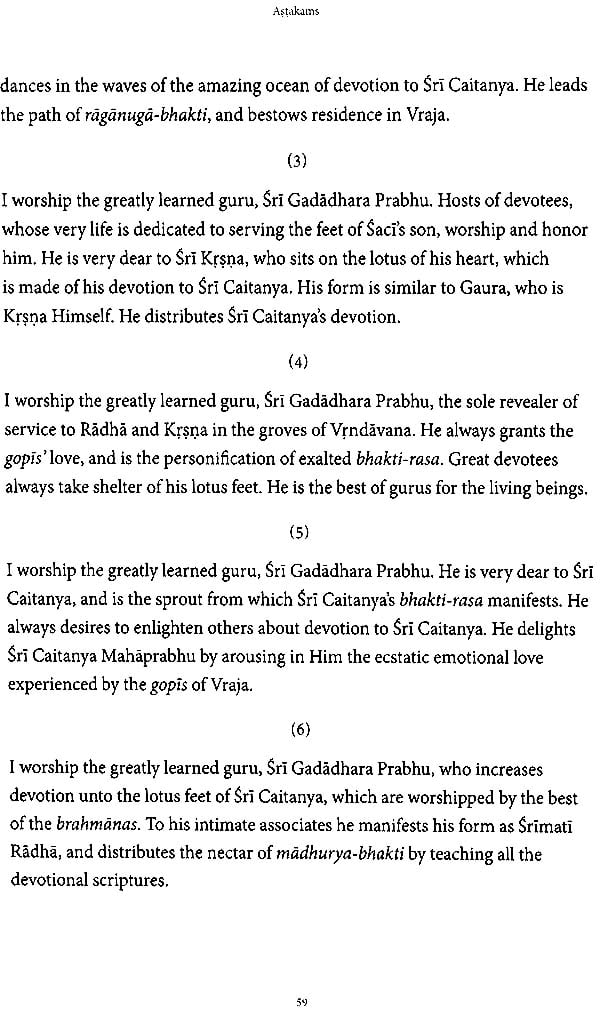 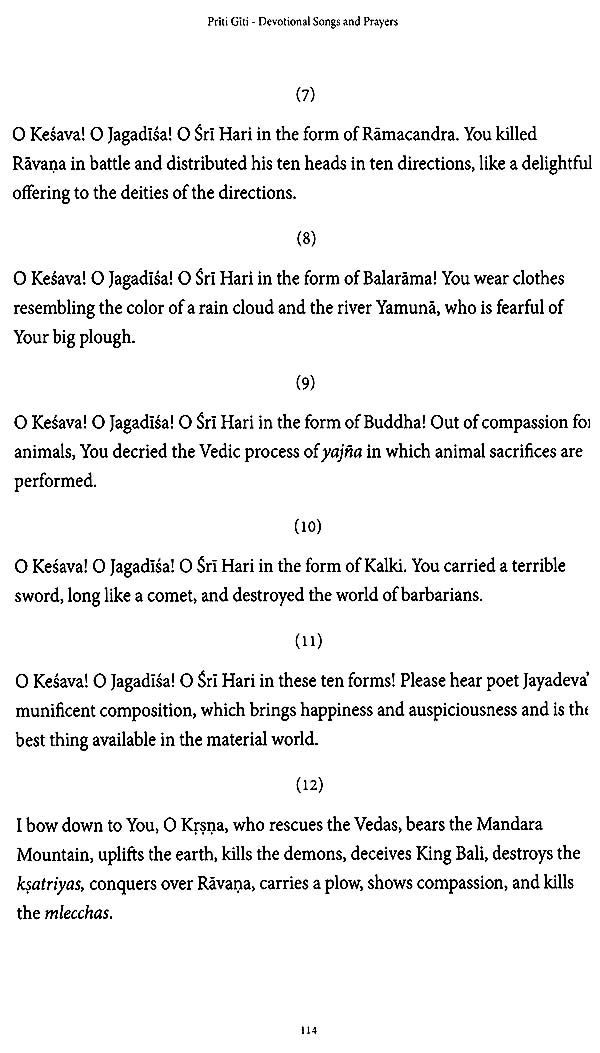 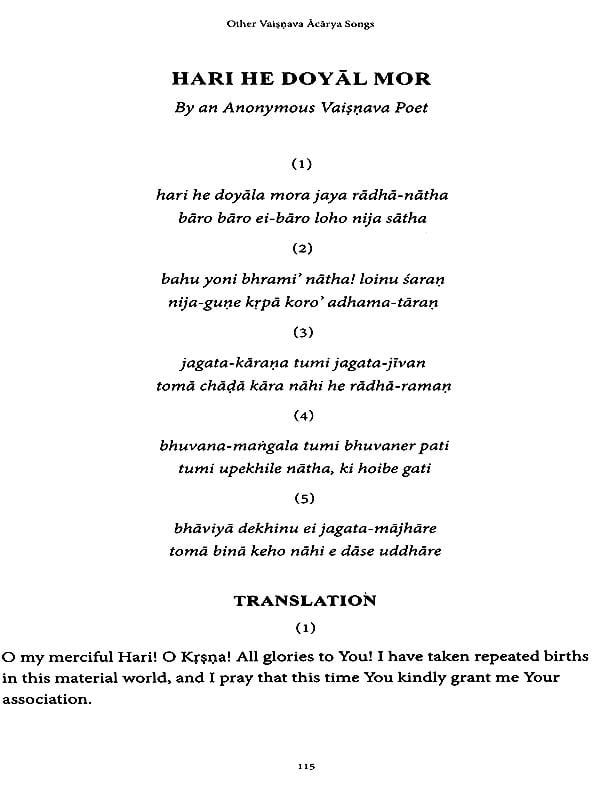