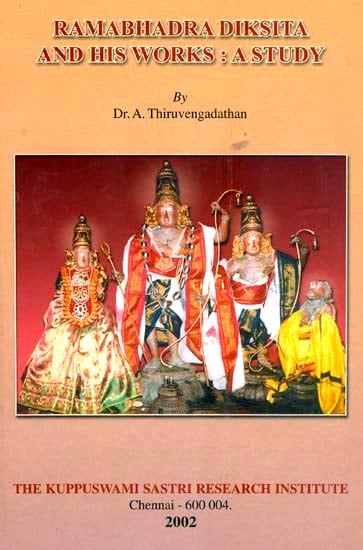 The Institute feels happy in publishing this book ‘Ramabhadra Dikshita and His works: A Study by Dr. A. Thiruvengadathan, sincere and dedicated scholar in the field of Sanskrit research.

This book is primarily the result of Dr.A. Thiruvengadathan ‘s Ph.D. Research programme at the University of Madras under the able guidance of Dr. K.K. Raja (former Head and Prof., Dept. of Sanskrit, Univ.of Madras ). True to their recommendation, it needed only little alterations to see the present book form.

Ramabhadra Diksita, a multi-facted geniusand literary luminary of the reginof Sahaji (17th cent. A.D.)hailed from Kandaramanikkam village near Tanjore in Tamilnadu. He had written many works inclusive of a Mahakavya, a Bhana, grammar works and stotras. A STAUCH DEVOTEE OF Rama, almost all his stotras are in praise of Rama.

The book in six chapters begins with the historical background of Dikstia, period, his life works and goes into the details of each of his woks, analysing them critically. The book carries six appendices giving interesting extracts from some of the works of Diksita. The appendices include illumination of a bandha and two yantra.

The members of the editorial committee are to be congratulated for their careful editorial work.

M/s. Kayveekay Printers are to be thanked for their neat printing and nice get up.

This book is presented to scholars who are interested in Sanskrit studies.

I have great pleasure in writing a Foreword to this book ‘Ramabhadra Diksita: His Life and Works’ of Dr. A. Thiruvengadathan. It has been accepted earlier for the Ph.D. degree of the University of Madras.

I had known Thiruvengadathan for nearly four decades now; he has more than adequately justified one’s expectations not only in his career by becoming the Principal of two colleges in Chennai but also, through his many valued contributions relating to Sanskrit Literature, rhetorics and theatre and also Vaishnava tradition.

The present book is one of his major contributions to the field of Sanskrit studies as it deals with the life and work of Ramabhadra Diksita, one of the most renowned scholars patronized by the famous Maratha ruler King Sahaji of Tanjore. Further, it is a valuable contribution to the knowledge of the history of Sanskrit Literature in South India in the 17th and 18th centuries.

In this book Thiruvengadathan provides the readers with a critical and a comprehensive study of all the literary works and a brief account of the technical and philosophical works of Ramabhadra Diksita. He has also given details about Diksita’ contributions to devotional literature.

The Introductory chapter deals with the historical and cultural background of Ramabhadra Diksita. The epic poem Patanjalicarita depiting the life of Patanjali is fully analyzed and its historical value is assessed in the second chapter. In the chapter on the dramas of the Diksita, the author of the book has also tried to trace the influence of the earlier authors of other on Rama like Mahaviracarita, Uttararmacarita, Prasannaraghava and Anargharaghava. Thiruvengadathan has not only made a brief survey of all the technical works of Diksita but has also incorporated in the appendix, two tracts, namely Sabdabhedanirupana and the grammar portion of the Saddsrsanisiddhantasamgraha which he has edited for the first time. The genre to stotra literature in Sanskrit is both versatile and voluminous representing a continous literary activity over the years. The stotras on Rama by Diksita should be regarded as the best examples of devotional poems with great poetic appeal, a fact clearly pointed out in the thesis.

Written lucidly and interestingly by Dr. A. Thiruvengadthan and added with appendices of the tracts of the two technical works, selected verses from the devotionals poems and select subhasitas from all the works of Ramabhadra Diksita, sample of Padmabandha and Ramayantras, I am sure this book will be studied eagerly by senior students of Sanskrit literature. 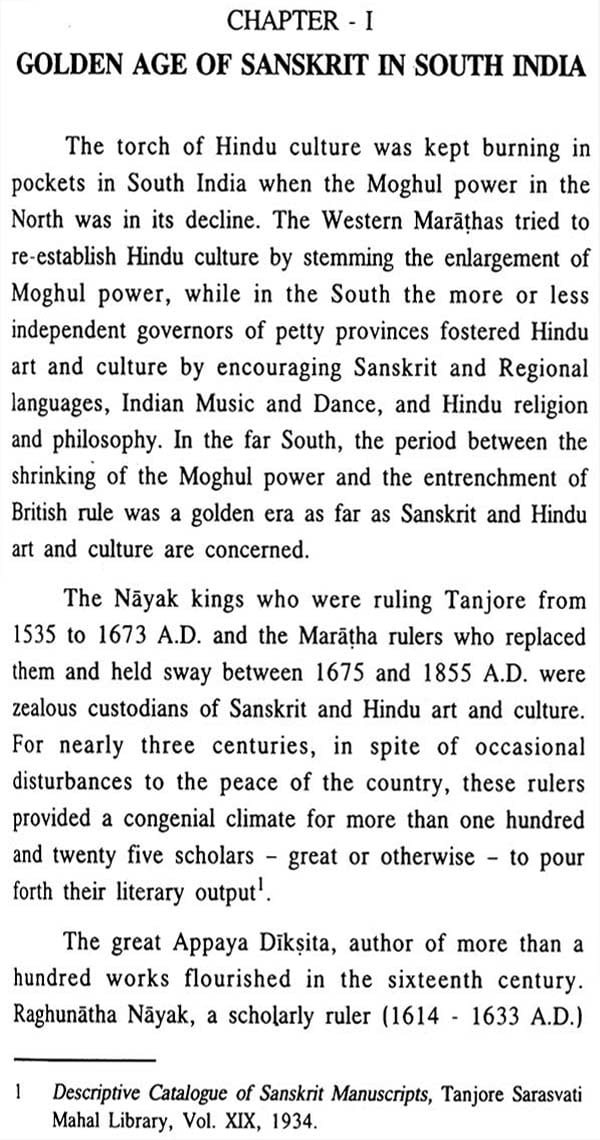 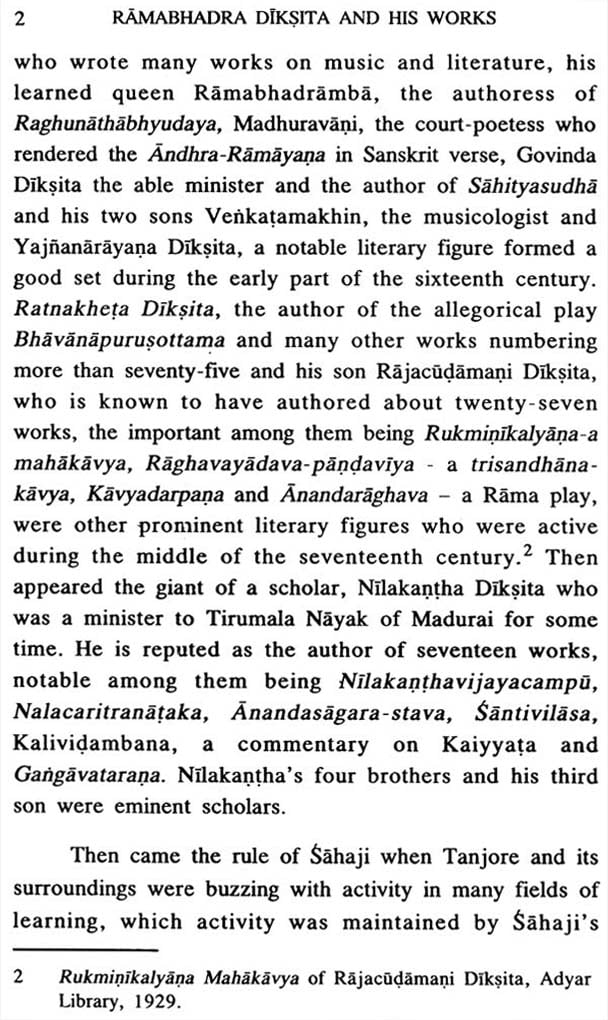 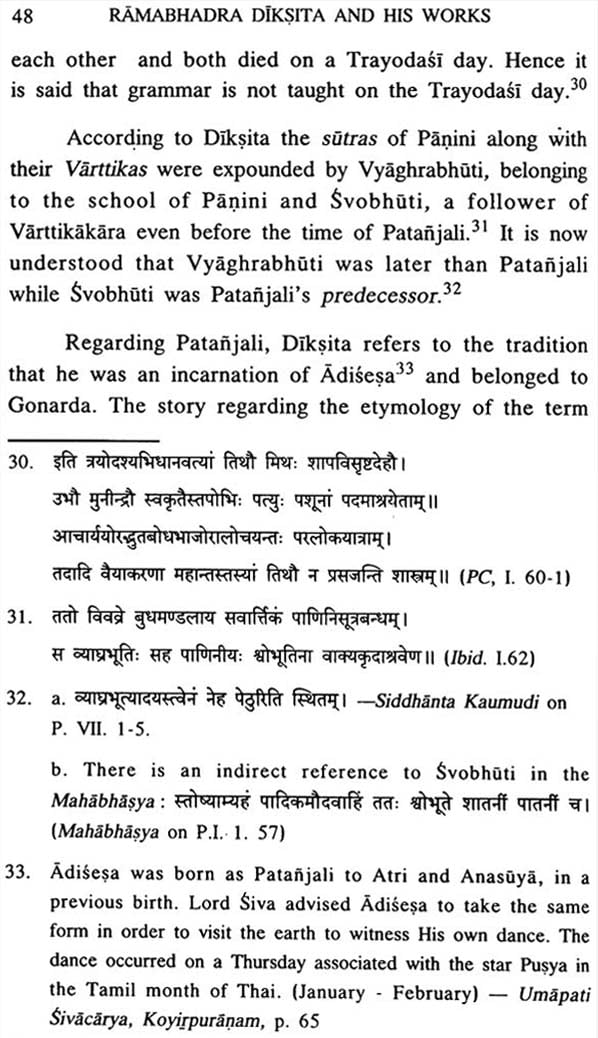 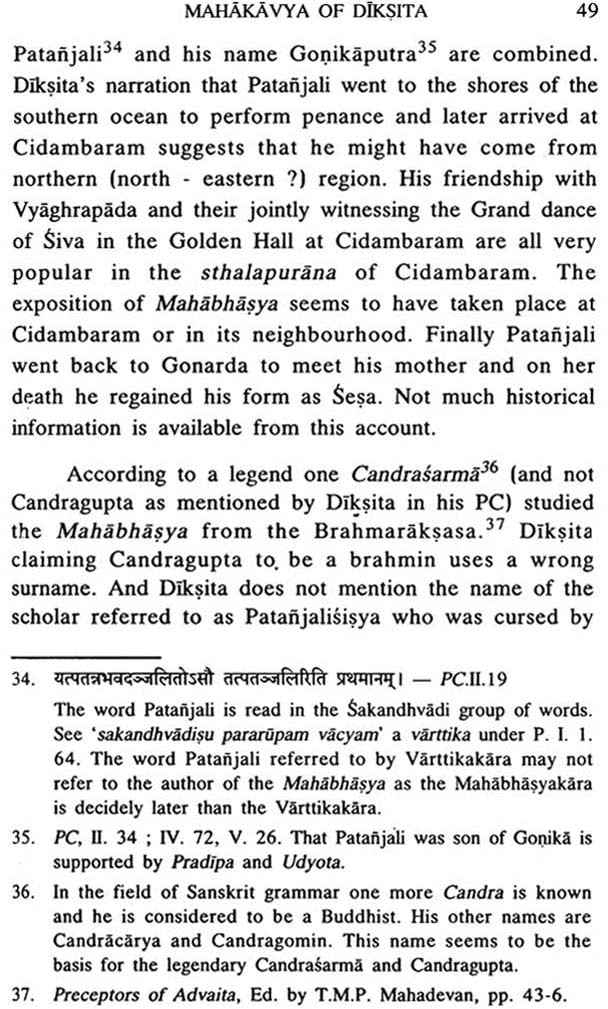 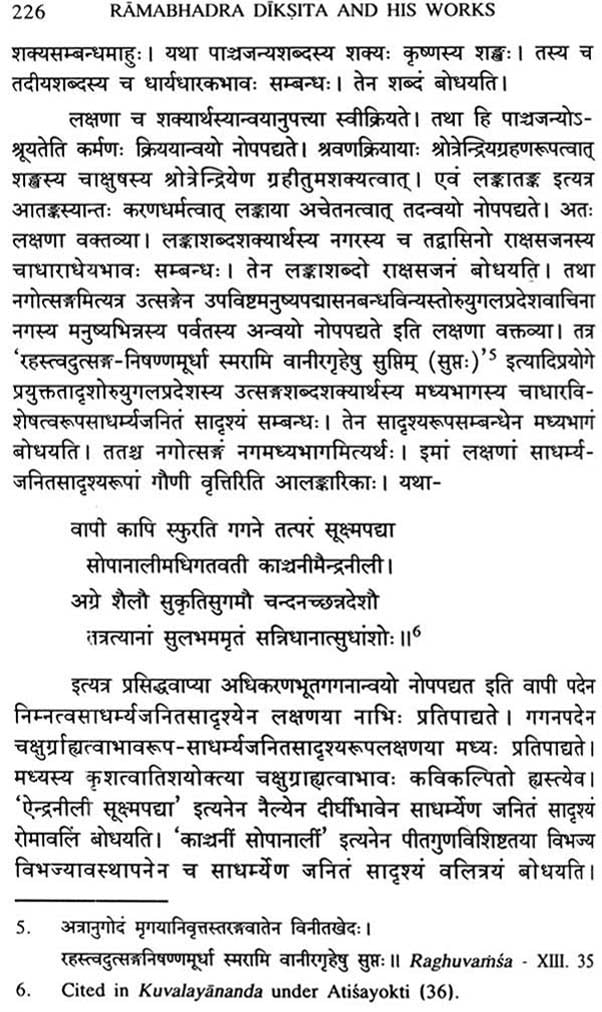 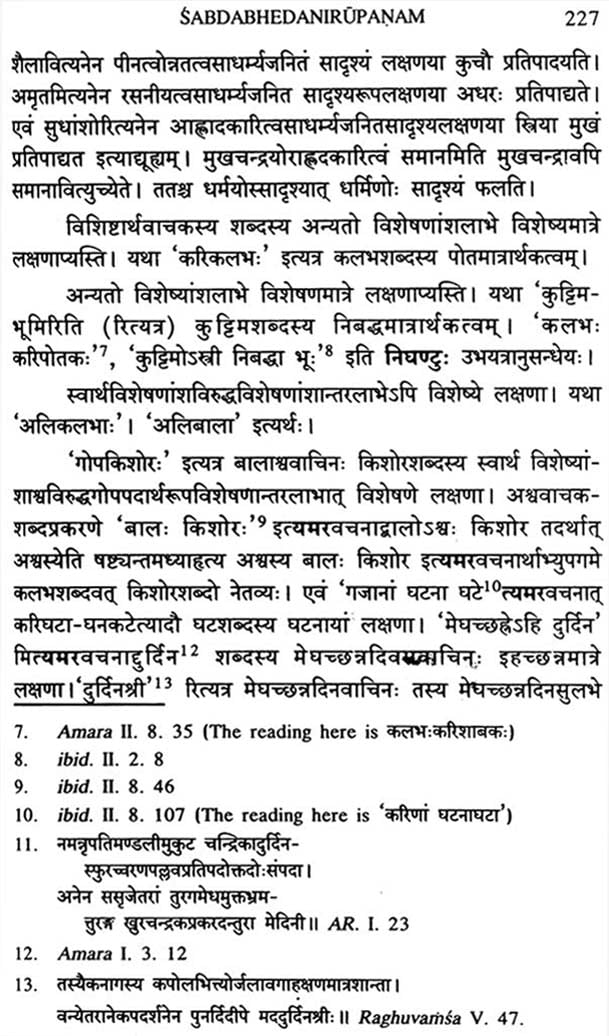 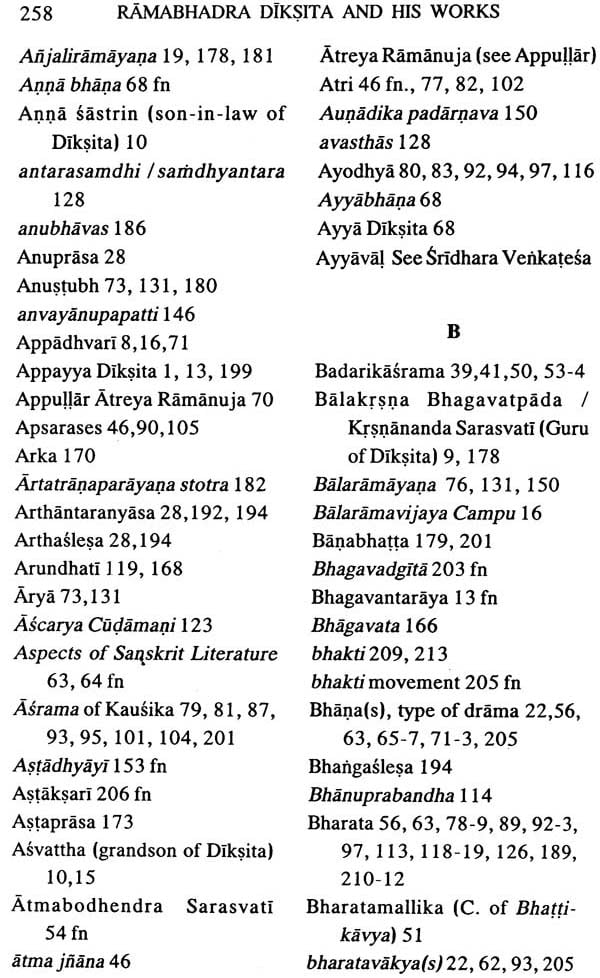 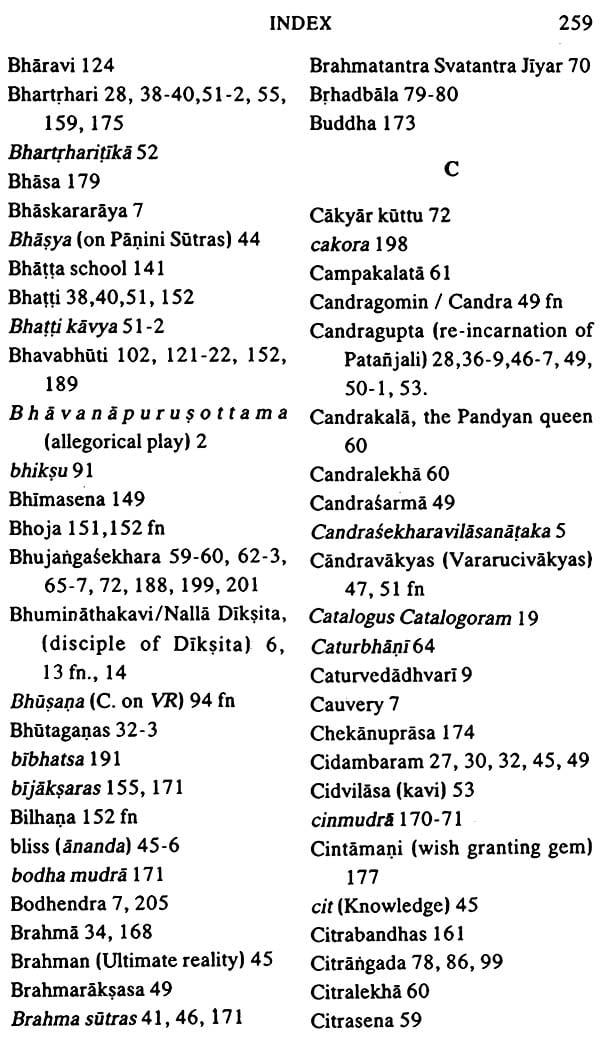 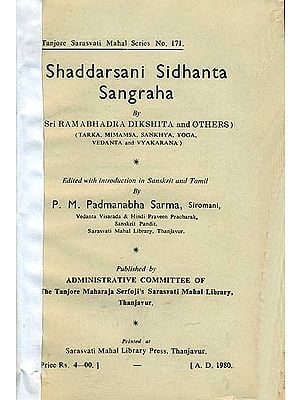 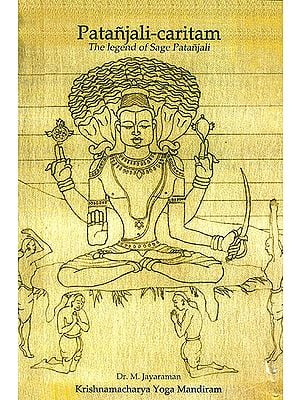 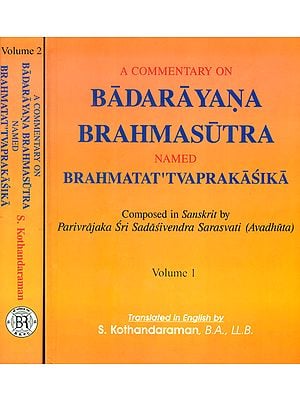 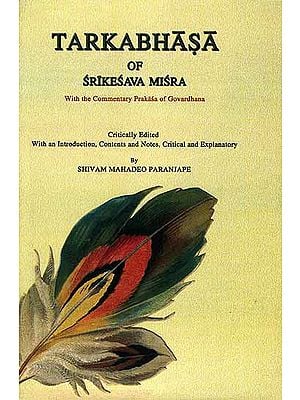