Swami is a living example of spiritual life. He is an articulate speaker and a prolific writer whose second book, Ancient Wisdom for Modern Ignorance, is now in print.

Perhaps we should characterize this book as an invitation to a debate among friends, for its author has some very definite points to make, free though he is of stridency and pedantry. Swami Tripurari sets himself squarely within the Chaitanya Vaisnava tradition of devotion (bhakti) to Krsna. He writes from within a system of theology worked out by Jiva and Rupa Goswamins in the sixteenth century and reaffirmed and restated by A. C. Bhaktivedanta Swami and Sridhara Swami in the twentieth. He presents the "good news" of Chaitanya's loving devotion (prema-bhakti) to Krsna with directness and verve, with such apt contrast and analogies with other religious and cultural views and values as to challenge non-Vaisnava readers to pay attention. Implicitly his is also challenging Vaisnava readers to make good in practice the ideal promise of Krsna bhakti for our times. His judgments are crisp and his proposals clear, as befits one who is confident and comfortable in the disciplic succession which he claims.

Not everyone will agree with all his judgments, but one readily sees the points he is making. They are good points, well worth amicable dialogue and debate. They help us face and formulate critical issues of life in personal and religious terms that bespeak hope, that offer explicit possibilities for living and loving in ways that are both humane and also devout.

The most striking claim of this book concerns the Krsna-centered love that Chaitanya epitomized and sought to extend to all living beings. Swami Tripurari argues that this Krsna-centered love affirms and fulfills human sexuality while so channeling it and purifying it that it becomes a mode of God-centered spiritual experience. He claims that Chaitanya's mode of devout love for Krsna is not only ontologically true but psychologically satisfying for human persons—for those wedded in conjugal love as well as for those who are celibate—and to an extent that neither materialistic lifestyles nor other religious ways of life can match.

This book does not attempt to prove this claim in any empirical or clinical fashion. What it does do, however, is challenge Krsna-Chaitanya devotees to open their lives to the humanly fulfilling and spiritually transforming process of loving devotion (prema-bhakti). It also invites the rest of us to pay attention, to see if there really are signs among the devotees that Krsna-bhakti does fulfill human life while purifying and spiritualizing consciousness and psychic experience.

One further thing that Swami Tripurari's very readable book does is show how thoroughly grounded in Vaisnava theology and in the scripture and literature of Krsna-Chaitanya devotion is sacred love: love of Krsna with his eternal servants, friends, kin, and consorts; Krsna-centered love ideally embracing all living beings. Thus we find that it is the Krsna-Chaitanya mode of loving devotion it-self—and not just Swami Tripurari's lively and timely ex-position—that presents the real challenges and invitations to readers of this book.

Let me offer my prostrate obeisances unto him, my eternal preceptor and ever well-wisher, Srila A. C. Bhakti-vedanta Swami Prabhupada, who is an ocean of compas-sion. Let me also offer my prostrate obeisances unto Srila Bhakti Raksaka Sridhara Deva Goswami Maharaja, who at the request of my spiritual master has helped me immensely to understand the significance of the relationship between the guru and disciple as taught by Sri Chaitanya. May they both bless the readers of this book, that the readers may one day soon relish the prema-dharma of Sri Chaitanya and thus inspire me further along the path.

This book is very different from the style of the writings of my spiritual master. Yet it is written in the same bold spirit that possessed him to come to the Western world, which resulted, among other things, in my spiritual life.

Understanding to some extent the value of Sri Chaitanya's teaching, I will consider this book successful if as a result of reading it even one person is moved even slightly in the direction of prema-dharma.

Clarion Call was directed to people of alternative culture who were both intellectually mature and spiritually inquisitive. The West has been experiencing a spiritual renaissance since the 1960s, which has also paved the way for pseudospiritual exploitation. Clarion Call addressed this spiritual hypocrisy while presenting India's ancient spiritual heritage in general and the teaching of Sri Chaitanya, the deity of the Gaudiya Vaisnavas, in particular.

Caught up in addressing the mind-set of the spiritual seeker while living in the holiest of places, Sri Vrndavana, I began to develop the chapters of this book. It is a book about just how different sexuality is from spirituality and how, ironically, the two, sex and the soul, are at the same time inseparable. Pure sexuality is the purest spirituality. The nine chapters that follow qualify this statement, distinguishing spirit from matter while establishing the novel idea that the soul has emotions and a sexuality of its own separate from the flesh. This is the precious gift of Sri Chaitanya to the world.

In the first chapter, a brief historical overview of the Judeo-Christian influence on the way we have for centuries thought about sexuality is presented. This view is now unpopular, and many alternatives to it, both spiritual and mundane, have arisen to replace it. I have used Georg Feuerstein's terms of "body-negative" and "body-positive," as outlined in his book Enlightened Sexuality, to describe the traditional Judeo-Christian outlook (body-negative) and current alternative spirituality's outlook (body-positive).

Both the past from which many are turning and the future direction in which many are heading fall short of answering conclusively the question of our sexuality in relation to our spirituality. On this point the first chapter rests, clearing the path for a discussion about a truly sexually positive spirituality. In this chapter, I consider the sexuality and personhood of Godhead as found in traditional Western religion and his absence in monistic forms of Eastern spirituality.

This serves to further substantiate the idea that, ironically, both popular Christianity and all forms of monism, while seemingly radically different in their analyses of sexuality, are actually very similar. The concept of the personhood of Godhead, however, opens the door for the atomic soul to enter into transcendental relationship (rasa). In this relationship, the sexuality of the soul can be realized.

The best of alternative spirituality in the West leads to monistic transcendence, taking us beyond the dualities of the world of the five senses, mind, and intellect. As pervasive as this conception has become, gaining considerable influence even within Christianity, most people advocating the doctrine of "oneness" do not realize the import of what they are advocating. While pining for unity, they do not understand the philosophical ramifications of what it takes to realize oneness.

In discussing this confusion in the second chapter, I trace alternative spirituality to be drifting in the direction of the advaita vedanta of Adi Sankara. Here it is apparent that monism, while at a glance appearing to deliver us from a judgmental asexual uptight conception of God, has little to do with sexuality, the soul, or God.

While forms of monism and voidism may speak of sexuality in intellectually stimulating vernacular, as opposed to popular Christianity's overtly negative vernacular, it does little to liberate the soul's sexuality from the flesh, because it does not offer any information about the sexuality of the soul in transcendence. Monism and voidism are thus described as body-negative and soul-negative theologies. They are soul-negative because they do not afford the soul emotional fulfillment beyond embodied material life.

The third chapter is a glimpse into soul-positive and truly body-positive spirituality, which has little to do with the material body, but everything to do with the spiritual body and emotional fulfillment of the soul in transcendence. This chapter briefly overviews the philosophy of Vaisnavism, or theistic, as opposed to monistic, vedanta In this overview, the Vaisnava conception of a personal God is presented in contrast to the conception of God that is missing in monism and underdeveloped in Christianity. 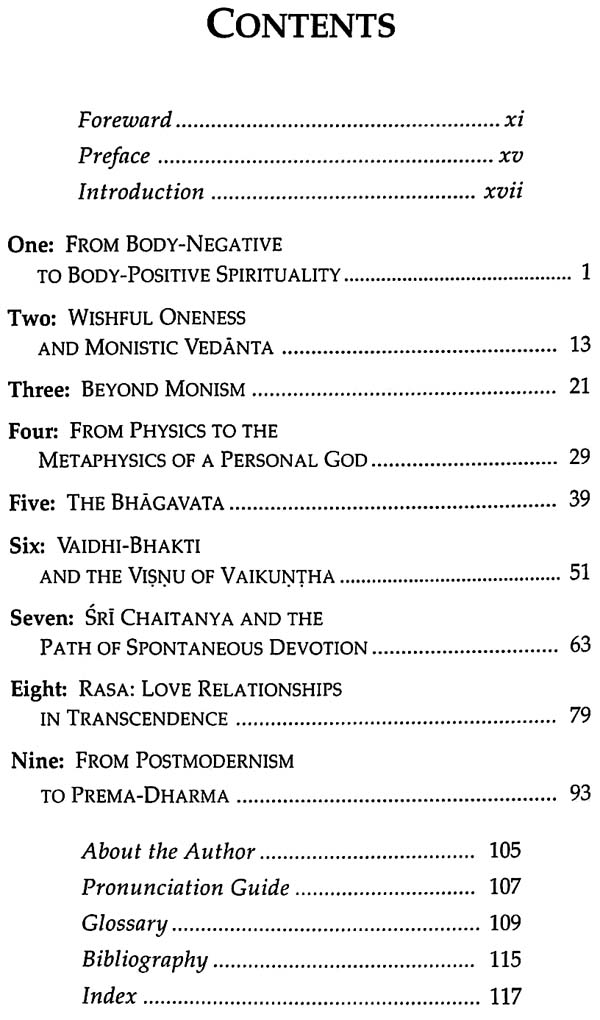 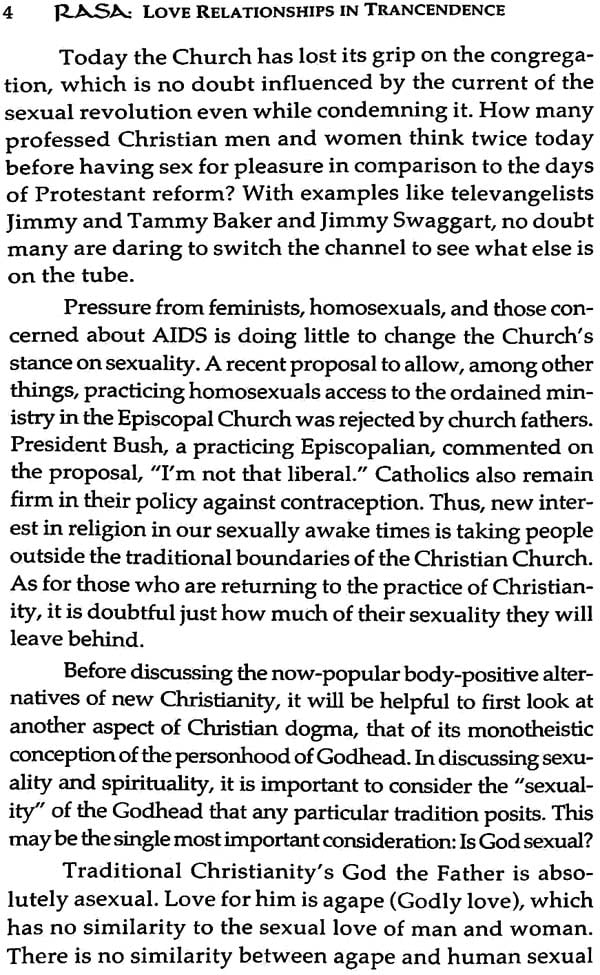 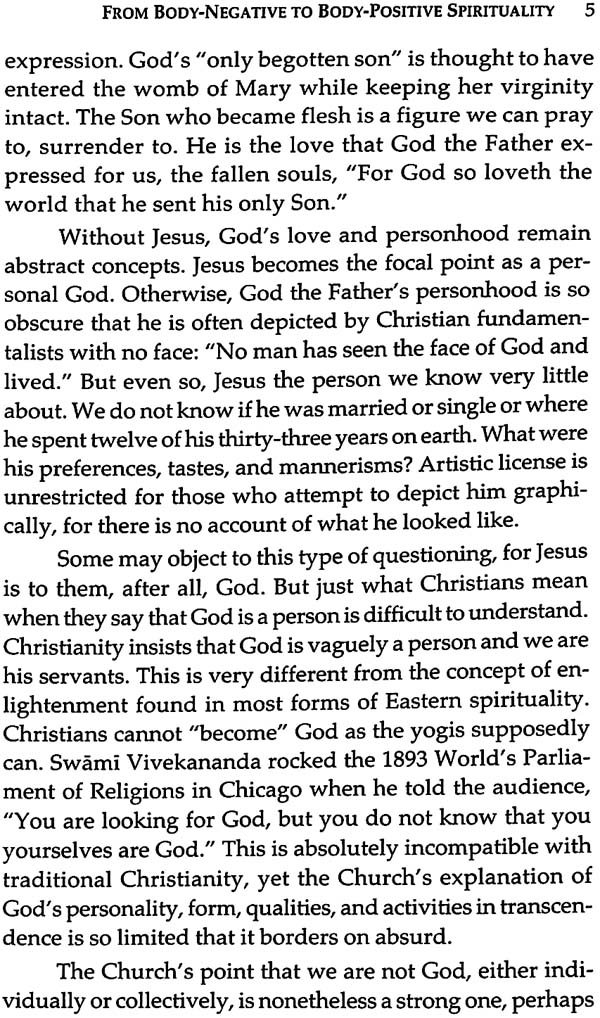 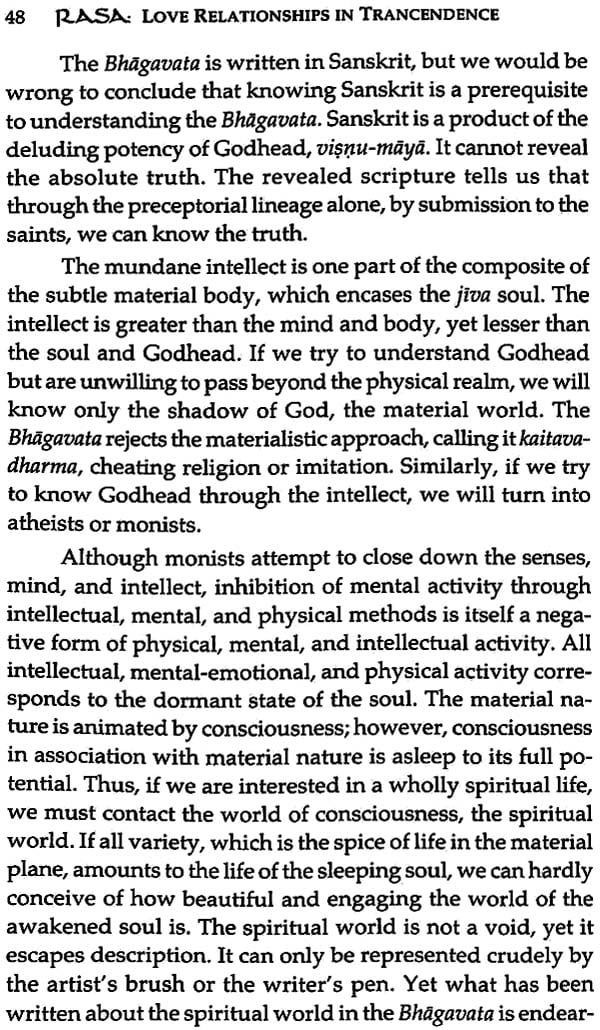 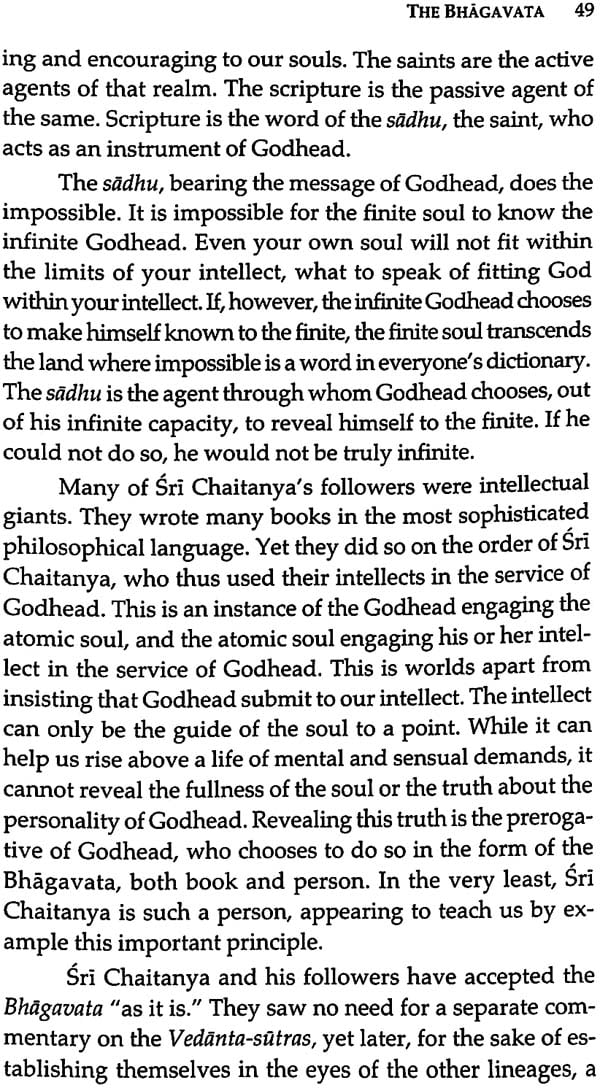 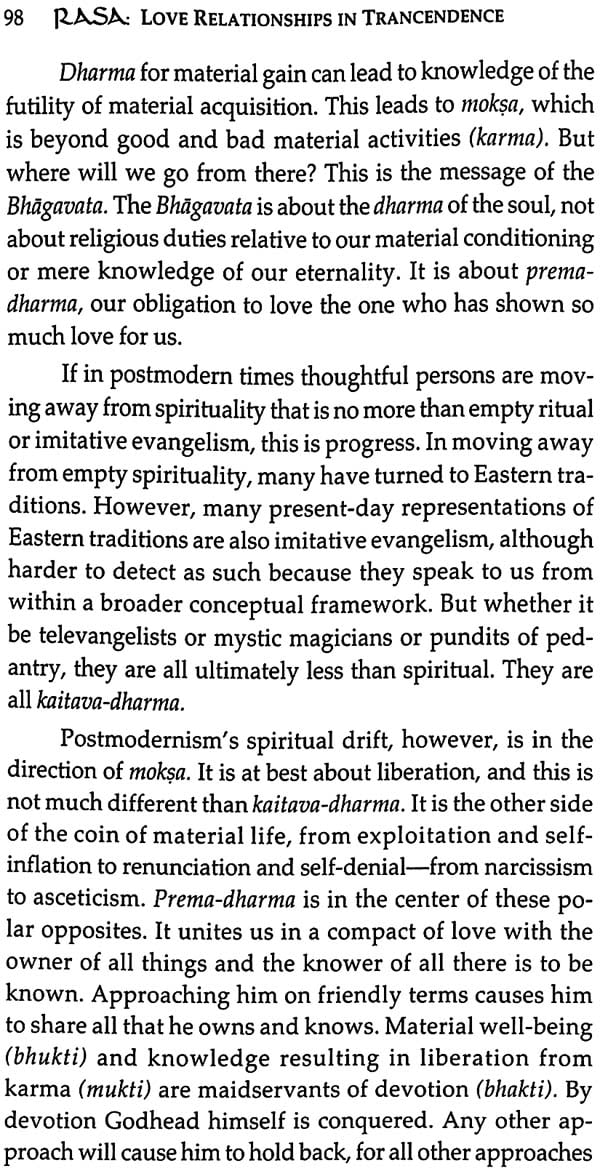 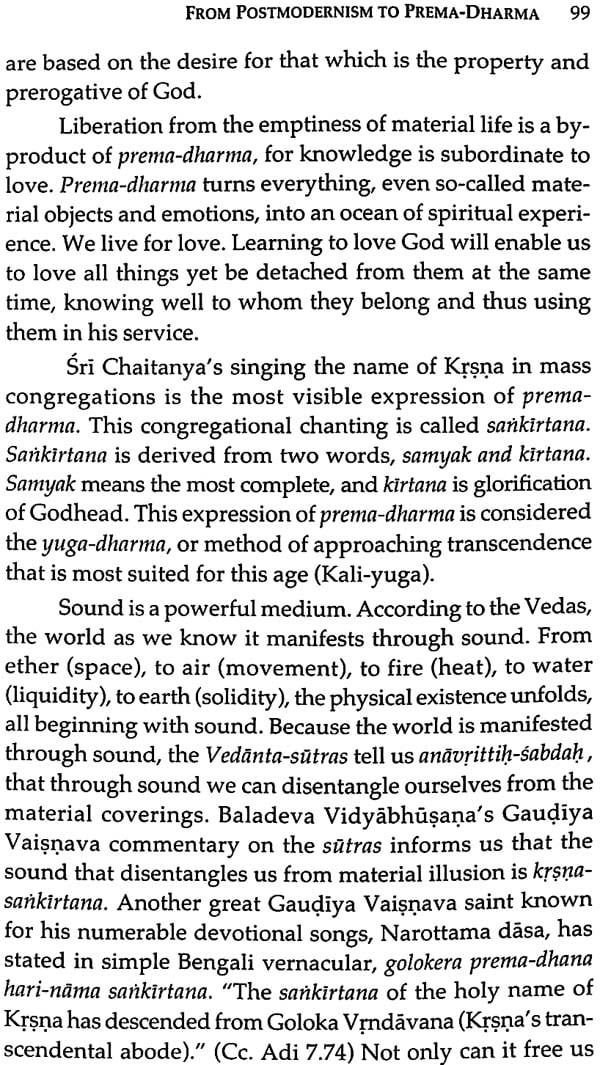