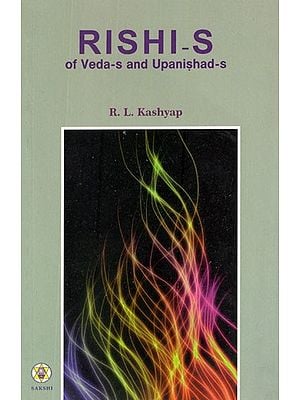 Shipped to 153 countries
About The Book

Anyone reading this book will understand the 'contributions of our Rishis All such people will start paying much attention and respect to the word "Rishi-s' whenever and wherever they hear the word mentioned.

The 32 questions chapter is simply great. Almost all the questions that may have arisen in anybody's mind is in the past, as well as many question that may never have arisen in their minds are posed, and answered effectively and completely.

The part on Gotra and Pravara is most beneficial and contains lot of information.

Dr. R. L. Kashyap is Professor Emeritus of Electrical and Computer Engineering at Purdue University, Lafayette, Indiana in USA. He is the recipient of many International awards. In 2003 he has received "Vedanga Vidvan' award instituted by Maharshi Sandipani Vedavidya Pratishthan (Ujjain), an autonomous body of HRD, Govt. of India. He is the receipient of Karnataka Rajyotsava Award 2012. He is honoured with "Veda Brahma' award by Bharatiya Vidya Bhavan in 2013. Prof. R. L. Kashyap has received "Sir M. Vishveshwaraya Award' by Swadeshi Science Movement in 2013.

He is the Honorary Director of Sri Aurobindo Kapali Sastry Institute of Vedic Culture, Bengaluru.

The rich heritage which the Hindus have inherited in the past several thousands of years is the handiwork of the rishi-s of the Veda-s, assisted by the Deva-s. All the Rishi-s work harmoniously. Their only aim is to help the humans to move out of their limited emotions and petty thoughts, and climb the ladders of consciousness so that they can access the vast realms of beauty and harmony. They help all human beings, whether kings or commoners. They help all the birds and beasts also. With their great healing powers, they try to make the humans free of the diseases. Since they have no desires, they are free of the effects of the six great agents of the evil powers named kama (desire or lust), krodha (anger), greed (lobha), delusion (moha), arrogance (mada), jealousy (matsarya), which are mentioned in RV.

They do not curse any human being. Of course, they defend themselves against the actions of humans who are empowered and impelled by the evil powers of Darkness.

The rishi wants humans to learn the art of cooperation with the cosmic powers which is called yajna. The Rishi-s do not pray for anything for themselves. They pray for prosperity, happiness, knowledge for all persons, using always the plural (nah) us. They feel a kinship with all humans. They recognize the presence of evil-powers and battle them as is evident in many mantra-s.

They understand the power of pure speech and do not curse humans at any time.

We should ask the question 'Why did they become a Rishi?' Is it just to get access to the divine mantra-s? This is a limited view. The rishi-s knew that already there were thousands of mantra-s revealed to Rishi-s. But they also know that the knowledge is infinite. Each mantra has a personality of its own. A mantra helps a person if the person can find the mantra appropriate to him/her.

Since our total human population is in billions each person having a unique personality, we need thousands of mantra-s to satisfy all their needs; a single mantra can only empower some particular individuals capable of tuning to its power. Hence each rishi, by means of strenuous spiritual practice, wants to access some more mantra-s. He not only receives them and memorises them; he places a part of his spiritual powers in that mantra so that an ordinary human being who recites the mantra feels the power of the mantra. This initial thrust propels the humans to dwell deeper into the mantra-s and to becoming empowered by them in all aspects of their personality.