In Samhitas of Caraka, Susruta and Vagbhata, the subject matter of Dravyaguna is found in scattered form. Later on it was very much felt to arrange the information regarding drugs of these samhitas together in the form of Nighantus so that knowledge of drugs mentioned in these Sarnhitas may become easy to approach. That is why Nighantus on Sarnhitas viz.- Caraka, Susruta and ~tafiga Hrdaya were composed which have description of drugs of respective treatises. Today, Sausruta Nighantu and ~tafiga Nighantu are available and published however, there is no any definite information regarding Nighantu based on drugs of Caraka Samhira. These are known as Sarnhitottara Nighantu which prepared a plinth for writing books related to the subject of Dravyaguna. The purpose of writing Nighantu is to make the knowledge of Drugs readily available to the concerned as mentioned by Cakrapani Dutta in the beginning of his book Dravyaguna Sarngraha.

In due course of time, after Sausruta and Astariga Nighantu, many more Nighantus were written by different learned authors between 6th to 17th cent. A.D. Viz.-

Names of more than two hundreds of books related to the subject of Dravyaguna are found in various references but majority of them are either not available or available with much difficulty or anyhow if available, they are found only in Sariskrt language without translation into a language suitable for majority of people. Therefore.. it is the need of time to explore these books and to translate them in a suitable language acceptable at global level.

The present work of Dr. Goli Penchala Prasad, one of my favourite disciple is praise worthy. He has tried his best to present -the subject matter of Abhidhana-Ratnarnala in English language.

The authorship and period of Abhidhana Ratnamala is not correctly known, however, it is a peculiar Nighantu in which drugs have been arranged in six major chapters according to their rasas.

As I have observed Dr. Goli Penchala Prasad, since his student life has been an enthusiastic person having a zeal to do something novel and beneficial for academicians.

He has not merely translated the book in English, has also given explainatory notes in todays scientific context which is really needed for any Ayurvedic text. At the end of this work, he has supplemented the book with glossary of Sariskrt terms and glossary of Botanical and English terms which add glory to this work.

I can imagine the untiring efforts of Dr. Prasad in the form of this work and extend my full appreciation and congratulations to him.

Abhidana Ratnamala popularly known as Shadrasa Nighantu is a Nighantu (Dictionary) of Synonyms of Drugs of all origins. As the work is divided into Six Skandas (chap- ters) based on the principle taste of the drugs it is so called as Shadras Nighantu. The chapters and the number of drugs dealt origin wise are appended below.
1. Madhura Skanda (Sweet drugs)
2. Amla Skanda (Acidic drugs)
3. Lavana Skanda (Salty drugs)
4. Tikta Skanda (Bitter drugs)
5. Katu Skanda (Pungent drugs)
6. Kashaya Skanda (Astringent drugs).

Author had given synonyms for the parts of the trees viz. root, bark, seed, leaf etc. which are not normally included in other Nighantus.

This book is popular in Andhra Pradesh in particular and South India in general.

The Manuscripts are available in Telugu. Script and published in Telugu by three diferent publishers. Prof. P.V.Sharma transliterated this book â€˜into Devanagari character by obtaining these manuscripts of Telugu and W8. published in Varanasi. Thus Prof. P. V.Sharma introduced the entire the Sanskrit knowing fraternity. The present English translation is takenup to present this unique work for wider acceptance. Author: Author of the work is unknown.

About The "Material of The Book: As already said the drugs are categorized according to the principle taste of the drug. Synonyms only have been given. As usual few of the synonyms indicate the properties and the morphology too. It is difficult to find the botanical identity of few drugs

. However, the translator has provided the vernacular names, from which the botanical identity can be assessed when the drug with that vernacular name is identified.

It is well known that two three different drugs have the same synonym. When these synonyms are given for a drug, confusion prevails to which drug the synonym is given. There are few instances in this text and has been highlighted for easy reference to the readers. 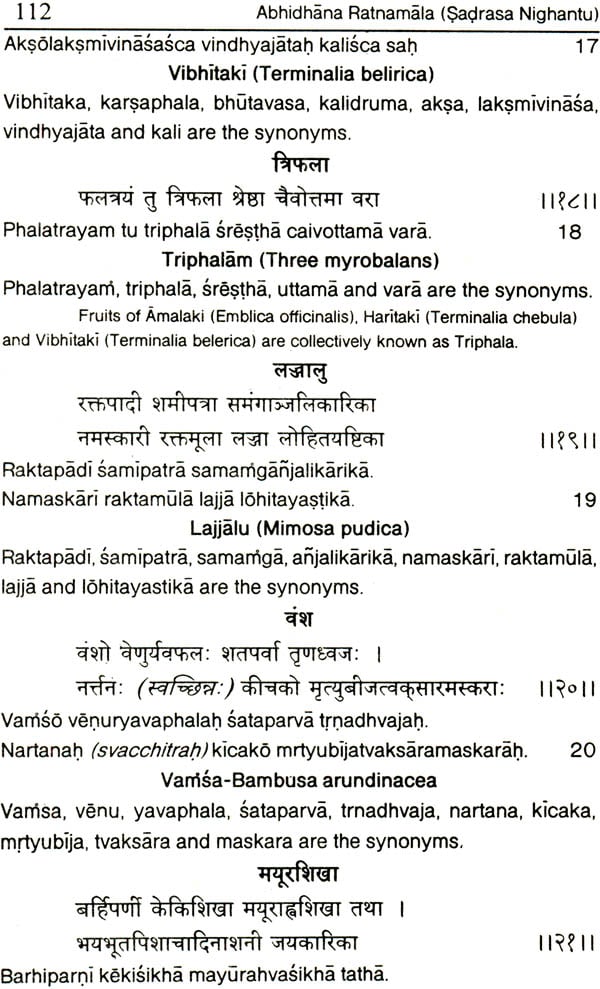 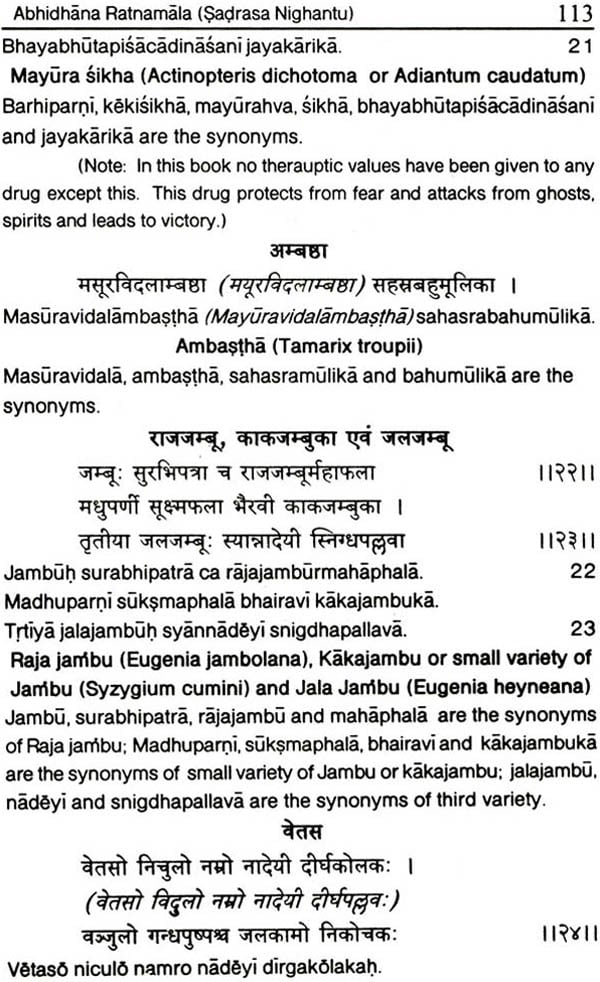