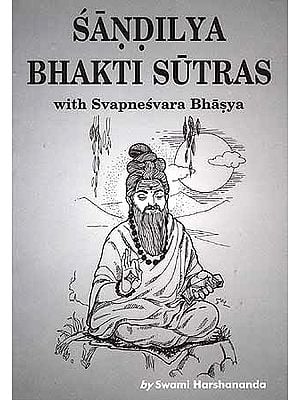 "The book under review is not an easy one to translate. Swami harshananda...has rendered it into apt English. The Introduction and Notes exhibit his high critical scholarship." - Bhavan's Journal

"The present edition is very welcome inasmuch as it sets out the text of both the sutra and bhasya in Devanagari and adds a very useful and scholarly English translation and commentary besides an informative introduction. The bhashya is indeed recondite in its own way using sastraic terminology, for above the reach of lay readers. The learned translation here brings it within the reach of one and all is both accurate and elegant. The subtleties of the technical terms are lucidly explained in the notes." - Deccan Herald.

"The book is useful for a study of Sandilya's work which appears to occupy an important position in the history of the Bhakti Cult. The translator's notes are learned and illuminating." - Bulletin of the Ramakrishna Mission, Institute of Culture..

The Sandilya Bhaktisutras is an ancient work of the Bhagavata school. The work being cast in the mould of the Brahmasutras of Badarayana, is more polemical in character, though the sadhana aspect (spiritual disciples) has not been ignored.

It has two wellknown bhasyas or commentaries, one by Svapnesvara (A. D. 900) and the other by Narayana Tirtha (A. D. 1700). The former has been considered as a pioneering work and given a much greater weightage.

The original sutras along with the Bhasya of Svapnesvara was translated into English in 1969. Detailed annotations were added to amplify the basic, but terse, ideas contained in the sutras as also constructive criticism of Svapnesvara's standpoint vis-a-vis Sankara (A. D. 788-830). A comprehensive introduction was also added to prepare the reader for a clearer understanding of this tough work.

The University of Mysore was kind enough to publish it, first in 1976 and reprint it in 1984.

Since it was out of print for a long time and since there was a steady demand for the same, especially from the world of scholars, it has now been brought out from this centre of the Ramakrishna Order.

We are grateful to the authorities of the University for according permission to withdraw the book and republish it from here. Our thanks are also due to Sri B. N. Nataraj of the Sri Nithyananda Compugraphics for the personal interest he has taken in producing this beautiful book.

We earnestly hope that the community of litterateurs as also the spiritual aspirants will welcome this reprint.

The Doctrine of Bhakti was not Imported

In his preface to his Indian Philosophy, Vol. I, Dr. S. Radhakrishnan writes: 'Ignorance of the subject of Indian thought is profound. To the modern mind Indian Philosophy means two or three "silly" notions about maya, or the delusiveness of the world, karma, or belief in fate, and tyaga, or the ascetic desire to be rid of the flesh. Even these simple notions, it is said, are wrapped up in barbarous nomenclature and chaotic clouds of vapour and verbiage, looked upon by the "natives" as wonders of intellect. After a six months' tour from Calcutta to Cape Comorin, our modern aesthete dismisses the whole of Indian culture and philosophy as "pantheism," "worthless scholasticism," "a mere play upon words," "at all events nothing similar to Plato or Aristotle, or even Plotinus or Bacon." ,

No wonder that such Western scholars have traced the origin of the doctrine of bhakti (or devotion to God) to Chrisitian ideas and influences. Even E. B. Cowell who has done yeomen service to the cause of Indian philosophy by his pioneering works through his transla- . tions of Sarvadarsanasangraha, Nyayakusumanjali and Sandilyasatasutriya is constrained to write in his preface to the last-mentioned work (p. viii) thus: 'Dr. Lorinser, Prof. Lassen, and Prof. Weber have maintained that the doctrine of bhakti arose in India as a more or less direct reflection of Christian ideas.

'I cannot pretend to speak positively on the contro- versy; I would only confess to a some-what hesitating inclination towards Prof. Weber's moderate opinion on the question.' Of course, these views have been contra- dicted by other scholars who have made a more dispassionate study of Indian thought. Garbe says in his Philosophy of Ancient India (p. 84): 'For one who is intimate with the intellectual life of ancient India, the doctrine of bhakti is entirely conceivable as a genuine product of India. No shadow of evidence has up to now been brought forward to support the theory that the conception of bhakti is derived form Christianity. The religious significance contained in the word bhakti has nothing exclusively about it that is specially Christian. Not only have devotion to God and faith in Him developed themselves gradually in other monotheistic religions, but even beyond the circle of monotheistic ideas the two conceptions are to be found. And particularly in India we possess all the essentials on the strength of which we have to regard bhakti as "indigenous" fact, as Barth says, since monotheistic ideas are to be found prevalent from the time of the Rgveda onward through almost all the periods of the religious history of India, and the powerful longings after the divine, peculiar to the Indian soul from yore, must have developed such sentiments as divine love and divine faith in a popularly conceived monotheism.' 1

Actually the doctrine of bhakti IS as old as the Rg-veda itself. While commenting on the aphorism 'bhaktih. Prameya srutibhyah’2 (Sandilyaya Sutras 1.2.9) Sri Narayana Tirtha has accumulated quite a mass of unassailable evidence to prove its Vedic origin. Take for instance the rk where the Lord as been praised and there IS also a reference to the recitation of His names: 'You praise that Ancient Cause, the Origin of rta (the Divine Law), accordingn to your knowledge. You will be freed from birth. If you cannot praise Him, recite His name. However, we, 0 Lord Visnu, devote ourselves to your light and attributeless form!' (R V. 1.156.3) And again, this rk where there is a clear allusion to the hearing and reciting of His names as also surrender to Him: 'He who offers (his all) to Lord Visnu, the husband of Sri (or Laksmi), the Ancient Cause, the Creator, the Ever-new, he who recites the glorious birth and works of this glorious Being, that giver, that reciter, obtains fame (or material enjoyments) and reaches the Highest Abode' (RV.1.156.2). Another rk considers Indra the great God as father and mother: '0 Vasu! 0 Satakratu! You have become our father! You are Mother! So now we bow down to you!' (R V. 8.98.11)

Coming to the Upanisads we see that though they are mainly devoted to knowledge, the doctrine of grace which is an important aspect of the philosophy of devotion, is evident, as for instance, in this statement of the Katha Upanisad: 'Whom the Atman chooses, by him is He obtained; to him He reveals Himself (2.23). So also in another: 'When he who is "devoid of desire-motivated actions, through the grace of God the supporter, sees the Paramatman's glory, then does he become freed from sorrow' (ibid 2.20) The Svetasvatara Upanisad actually uses the word bhakti and clearly states prapatti (self- surrender) also: 'He who has supreme devotion (bhakti) towards God, and as towards God so towards the teacher, to him verily, the great soul, all these things declared (thus far) will reveal themselves' (6.23) 'To Him who at the beignning created Brahma, and who gave the Vedas to him, to Him the God who reveals the knowledge of Himself, desirous of liberation, do I fly for refuge' (6.18).

Gradually the doctrine of bhakti was systematised into a regular philosophy and religion. It came to be known as the Bhagavata-religion and has also been variously designated as the Narayanlya, Satvata, Ekantika, or Pancaratra religion.f Its main sources are Narayaniya section of the Mahabharata, the Visnu Purana, the Bhagavad Gita, the Bhagavata Purana, the Pancaratra Agamas and the Bhakti Sutras of Sandilya and Narada. Not being satisfied with the impersonal Brahman of the Upanisads, the Bhagavata religion has converted Brahman into the Personal God. Isvara, Narayana and Krsna-Vasudeva are the names most commonly used with respect to Him. He cannot be apprehended by the senses nor by logic and arguments. Srutis or the scriptures at best point towards Him. His grace is the supreme factor in realising Him. Single-minded devotion (ekantikabhakti) is the only thing by which His grace can be obtained and He can be captured. Actually He is not independent as others makde Him out to be, because, He is subject to the will of his devotees (bhaktaparadhina). He is always fond of those devoted to Him and reveals Himself to them. Complete resignation (prapatti or saranagati) is another means of attaining Him. These are its chief tenets in brief. 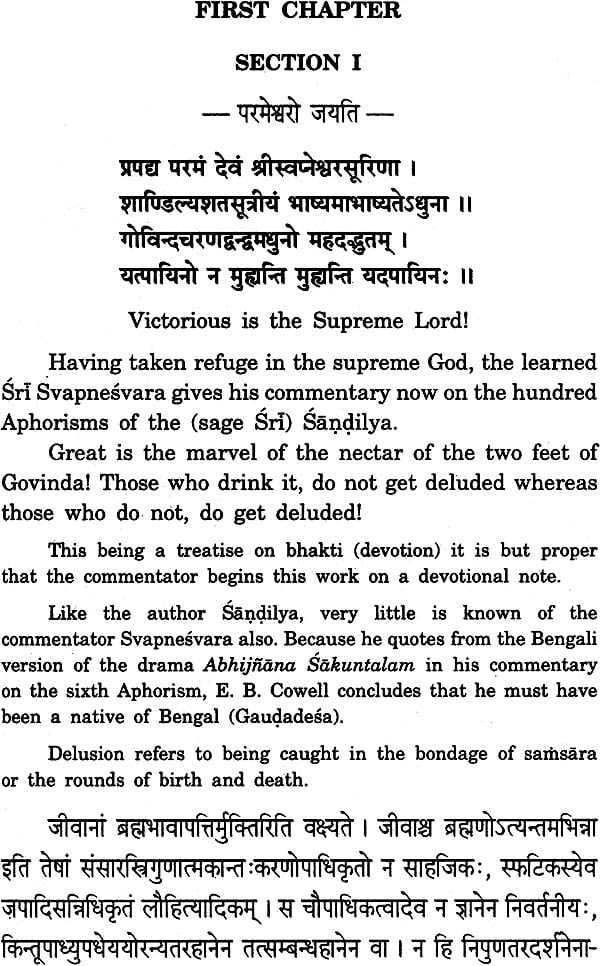 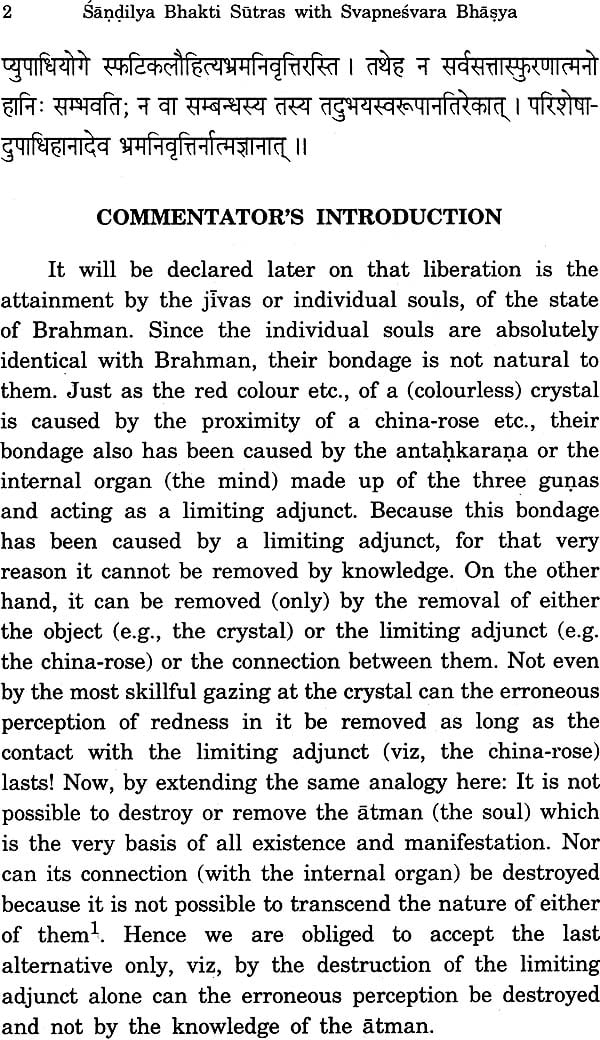 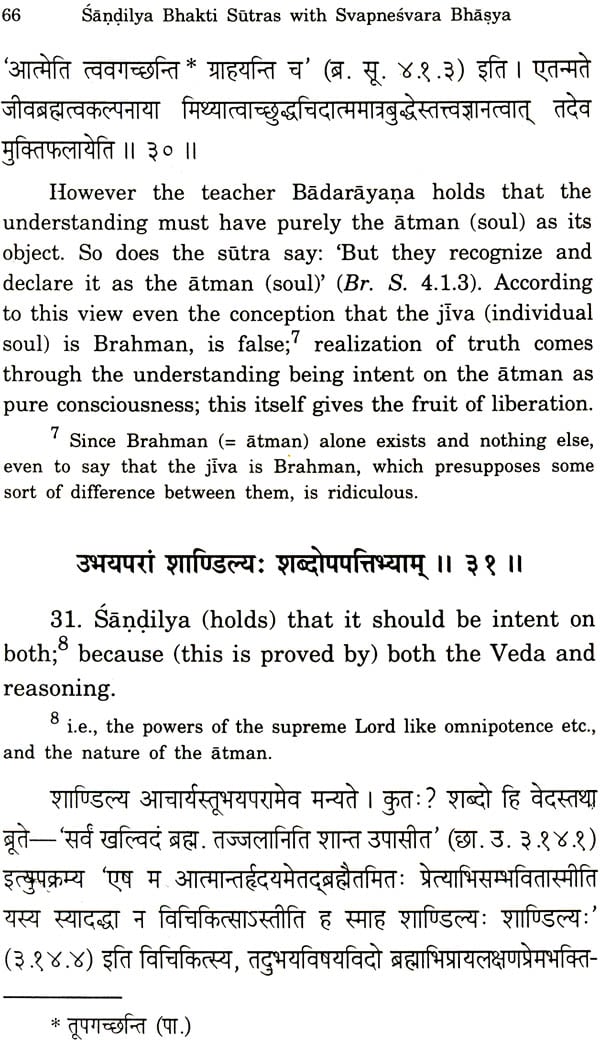 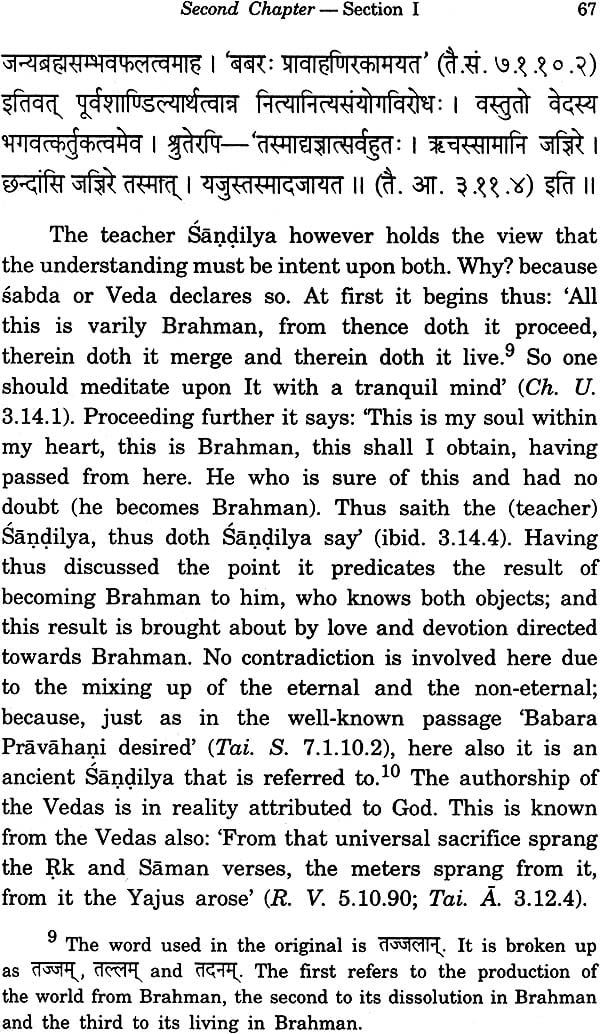 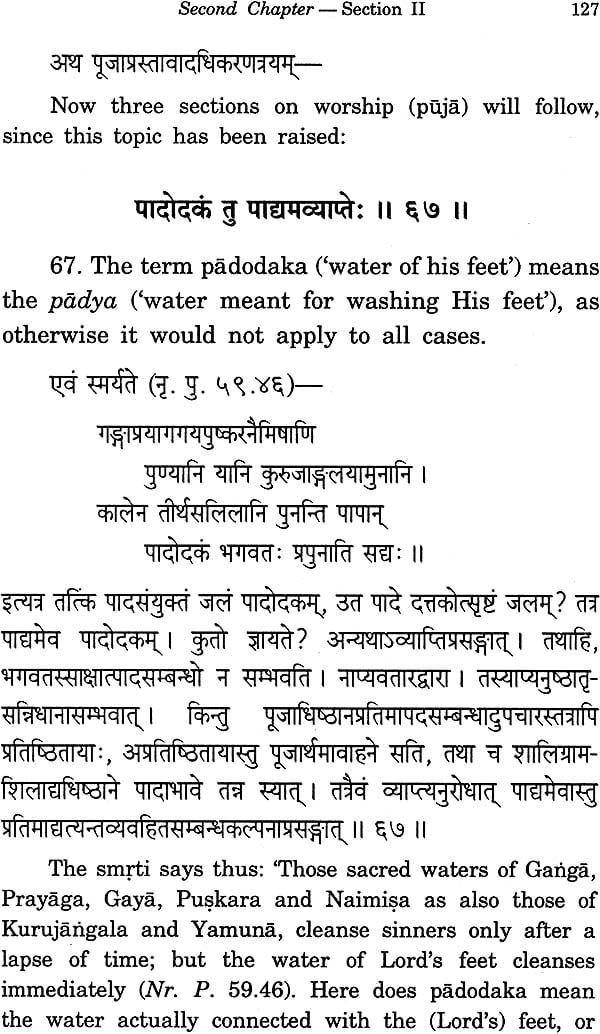 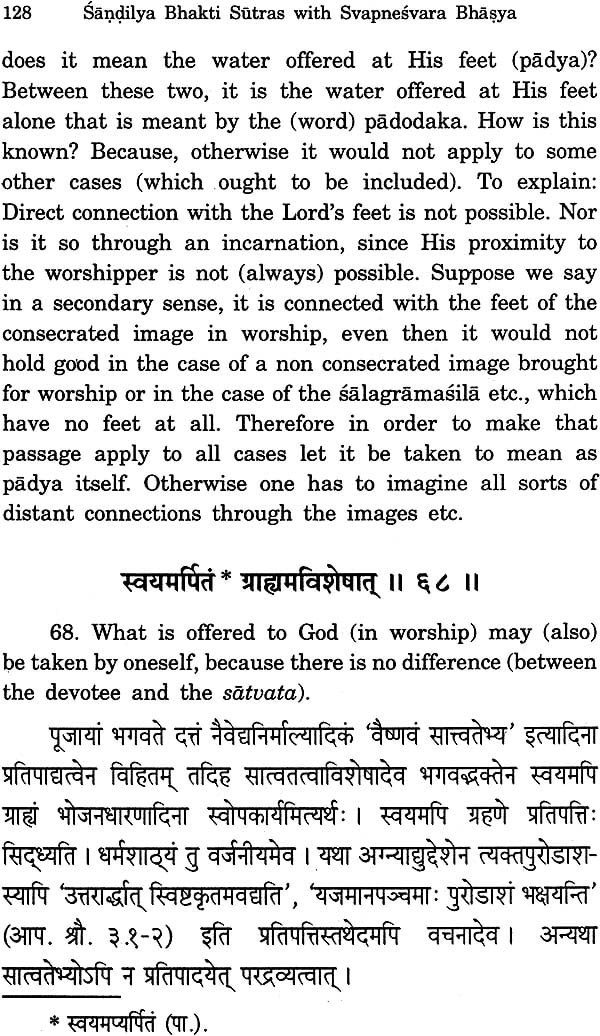 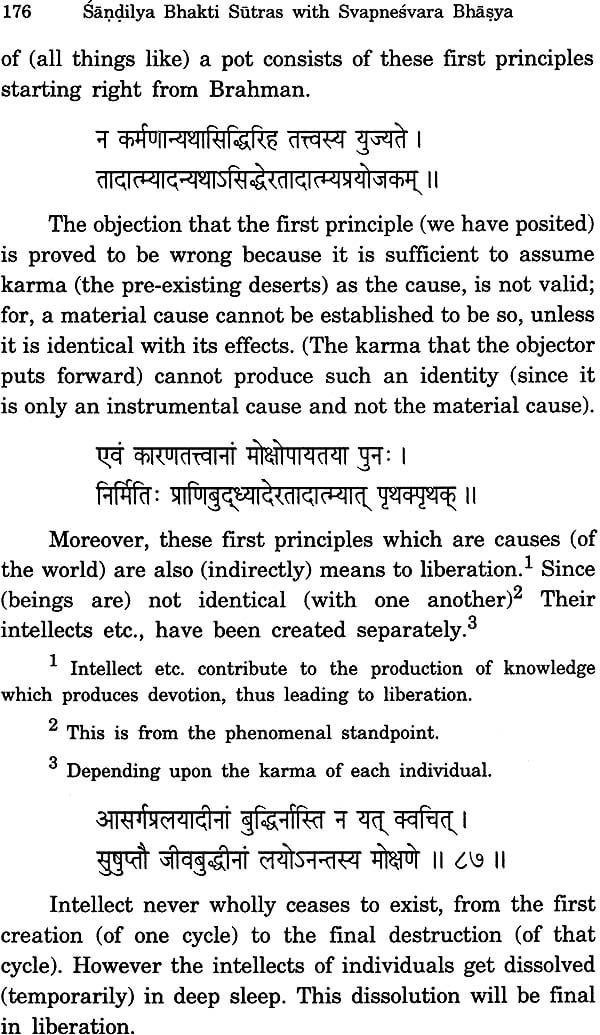 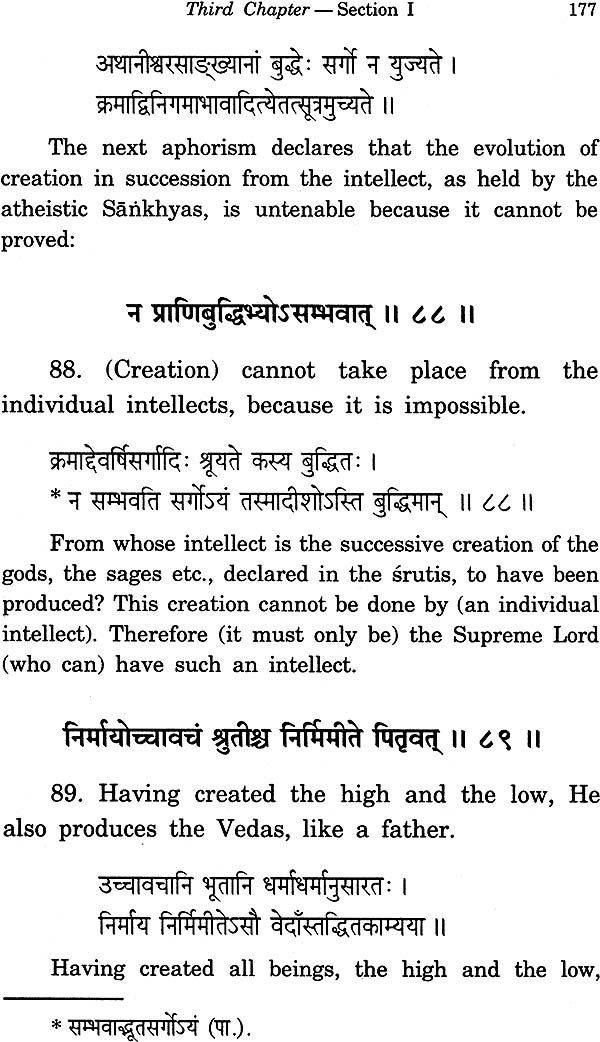 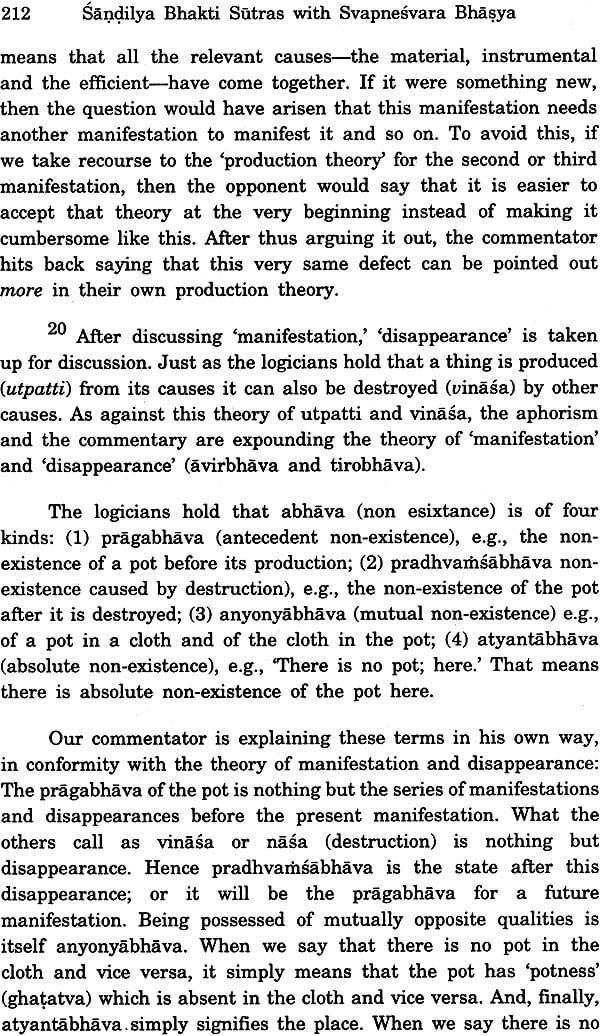 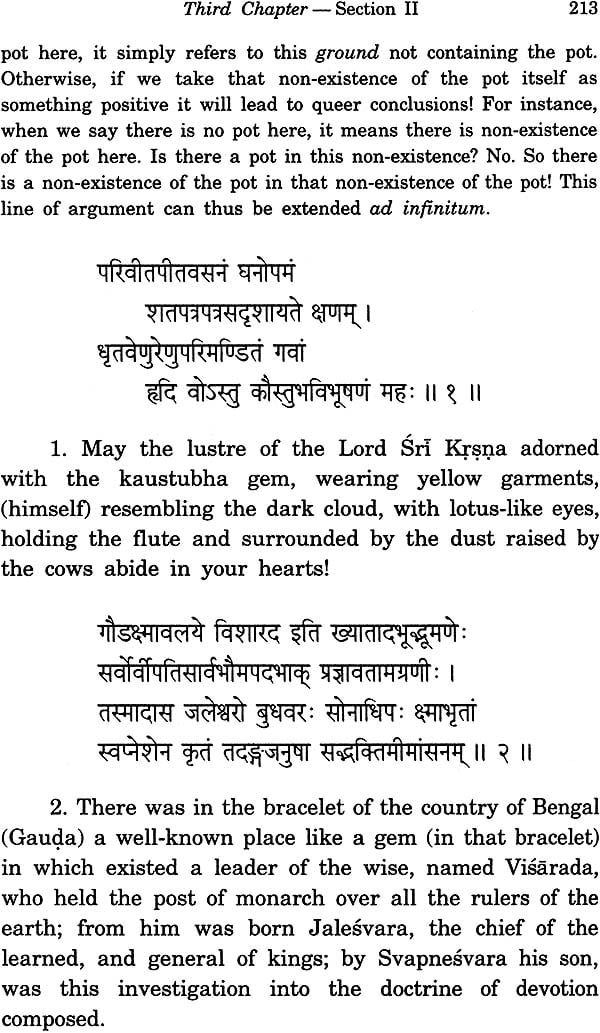 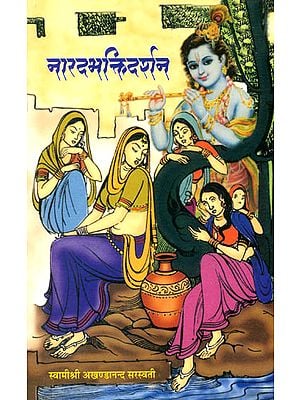 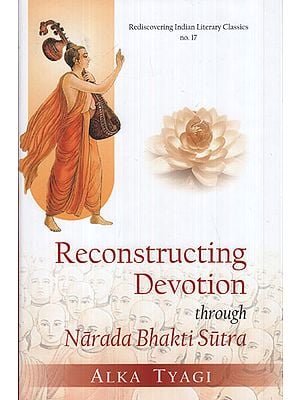 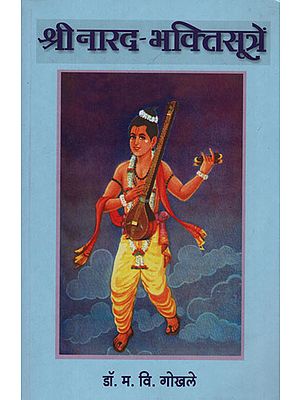 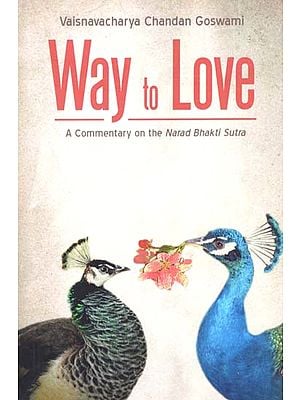 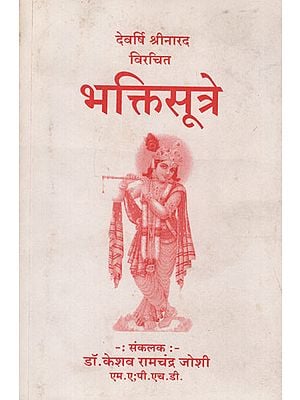 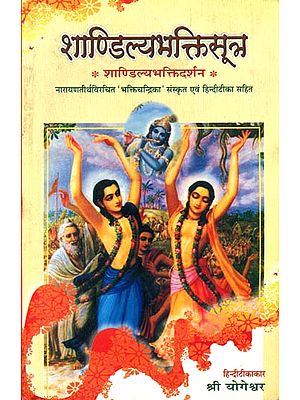 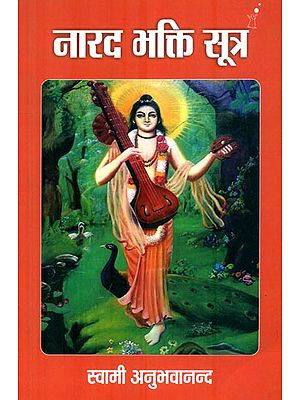 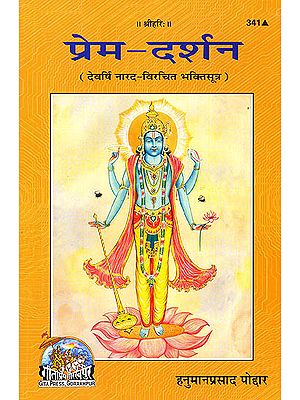 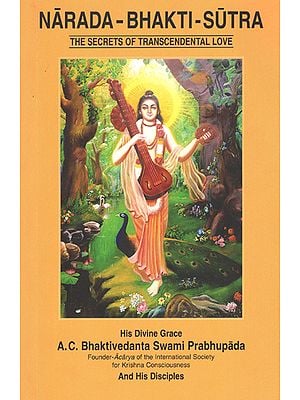 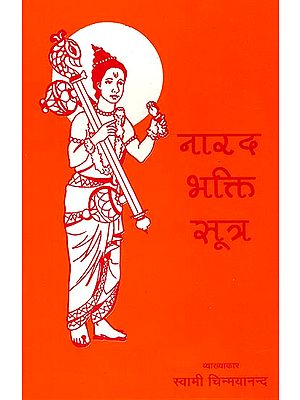 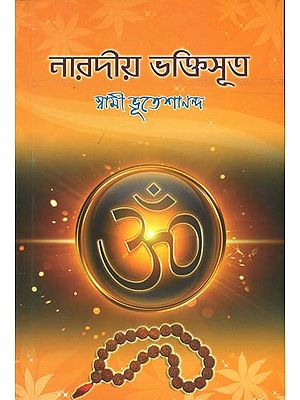 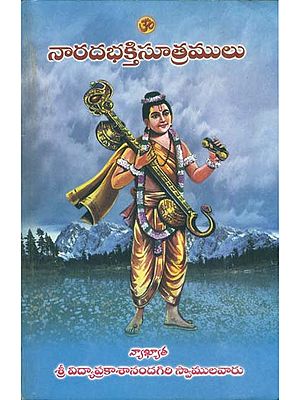