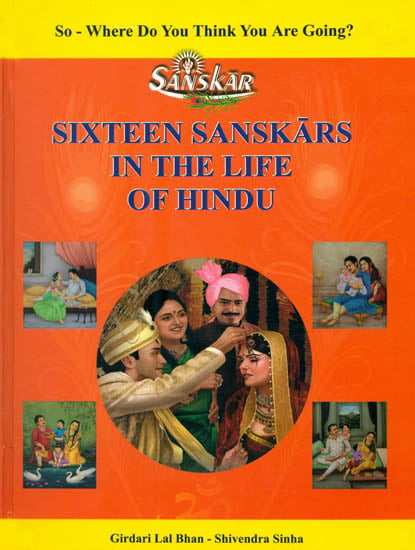 This book provides a description, in simple language, of the 16 Sanskars in the life of a Hindu, their historical evolution and points out to their continuing relevance through changing times. The text includes numerous Sanskrit shloks with source references, along with a transliteration and a translation of the shloks in English. Of the 16 Sanskars, three are dealt with in greater depth - initiation to education, marriage, and death. At the same time the book offers practical guidance to help those who wish to perform any of the 16 Sanskars. The book is illustrated with artistic colour plates and with sketches in black on white.

The four stages (ashrams) of the life span, and the four classes (varns) into which the ancient Rshis stratified society are described. The book seeks to dispel commonly held myths, by providing answers from the scriptures, on various questions:

• Is the study of scriptures denied to anyone?

• Can the ritual of havan / yajya be performed by all ?

• Are women, and certain sections of Hindus, forbidden to be invested with the sacred thread (janeu)?

• Are women not allowed to undertake scriptural education?

• Can women train to become scriptural scholars and priests (Panditas)?

• Is varnashram (stratification of society) determined simply by birth?

• What do the scriptures say about the practice of ' forced marriage' and of 'dowry'?

With knowledge, skill, dedication and effort (=sanskar), clay and stone are transformed into statues, and seeds into flowers that bedeck the garden. Uneducated and undisciplined, a person is likely to live a basic animal life but, when inculcated with sanskars, the same individual evolves into a civilized and cultured individual. It is through sanskars that the ordinary individual becomes extraordinary: a scholar, a hero, a sage, a philosopher, and so on. Ornaments may adorn a woman's body, but when endowed with sanskars she receives respect in society.

Hindu sanskars crucially instruct the individual to be moral and of good conduct, living a non- violent life. Children and youth should, therefore, be encouraged to attend, on a regular basis, activities where sanskars are imparted to them. The model of such teaching that has been practiced in India for aeons can be adopted in other countries as well.

Hindu society is currently divided on the basis of sects and cults. Worshipping the One who is Transcendent and the embodiment of Truth, Reality and Bliss, holding sacred the Vedas and the Gayatri mantr, we should attempt to unite the society. Hindu-ness conveys the message of dharm, a tenet of living that is eternal in its application. Its universal outlook, that includes the entire humanity the world over, is the prime need for a socially cohesive and integrated society.

I am happy that this book: 'Sixteen Sanskars in the Life of Hindu' written by Girdari Lal Bhan and Shivendra Sinha is being published. Their knowledge and expertise of the subject makes it an essential reading for all, and I believe that every family should possess the book. I consider it to be of immense value, and pray to the Almighty that it serves as a guide in the moral and intellectual development of the youth who, in turn, create an integrated and responsible society.

Since times immemorial, the life of the Hindu has been guided by Sanskars. Traditionally, knowledge of these has been transmitted from generation to generation through the practice of rituals, and through guidance provided by the family priests. In recent times, there has been a significant increase in the number of Hindus living outside India. The authors were made aware by many such families of their need to know about sanskars. This book has been written in response to their requests, but we hope that many others, who have been educated through the medium of English language, would also find it useful.

This book is meant to provide the reader an introduction to the 'milestones' / rites of passage (sanskars) in the life of a Hindu and to the reasons for having these. It gives a brief generic reference to how most of the rites are performed. Of the sixteen sanskars, three are regarded as the most important: i) initiation into the phase of education (upanayan and vaidarambh), ii) marriage (vivah), and iii) death (antyaishti). These are described in greater detail.

In the description of the rites of sanskars only some mantras have been included. This is not to suggest that the other mantras for the rite(s) are less important. The readers who are interested to know the rites in detail should refer to the scriptures, or to manuals that describe the sanskars in full detail; four of these manuals - Vedic Vision (English edition), Sanskar Vidhi (English and Hindi edition), Sanskar Chandrika (Hindi edition) and Sanskar Vidhih (in Hindi) by Swami Dayanand Saraswati are listed in the References at the end of this book.

In the description of the sanskars, when the subject is identified in masculine terms, it should be read as a member of either gender, except in reference to father, husband, or specifically to son.

The term Hindu refers to all those who follow the spirituality and the way of life based on the ancient Indian scriptures and who believe in, and live life according to, dharm.

Wherever there is mention of Brahman / Brahm, it is to denote the Supreme Being. This should not be confused with Brahmin - one belonging to the first varn (the priestly class), or with Brahma - the Creator.

What would be the greatest journey that one could ever embark on? Perhaps one might think of a great voyage into the vast expanse of outer space, zooming off into the depths of the universe, encountering new worlds and systems similar to or different from our own, or perhaps discovering new forms of life! Or may be one might think of scouring the sea-beds and exploring the depths of the deepest oceans, finding out how life survives and functions at sub-zero temperatures and in total darkness. All of these would be, in their own right, truly incredible journeys. Likewise, each one of us undertakes one great journey of which we may not be fully cognisant. In this, the Journey of Life, we are offered many opportunities and faced with various challenges. Unfortunately most of us treat life as just a daily routine. People want to progress in life, remain in control of their present and of their future, assuming they are in charge of the direction in which their life is going. In reality, however, when events happen in life, as they do, in a seemingly random haphazard manner and beyond our control, we find it difficult to explain these in a purely material context.

The question 'What is this life for?' has always been one of great interest to mankind, engaging the minds of philosophers and thinkers from times immemorial. In searching for the answer, inspired by divine wisdom, Hindu seers and visionaries came to the conclusion that it is crucially important for a person to know the answer to this question, and to think about and plan how life should be lived. Their considered opinion was that just as one cultivates, nurtures, and protects a garden plant, one should live one's life in a proper way and based on moral values.

The Hindu view of life has evolved over thousands of years. It gives space to both spiritualism and materialism. Life should be fully enjoyed, but one must not forget that all pleasures and enjoyments are transient, and indeed that life itself is transient. One has to accept the process of ageing and the inevitability of death and, once the phase of active working life has come to an end, start renouncing physical and material attachments, in preparation for the inevitable end of the journey of life.

The Hindu scriptures - the Veds, Upanishads, Purans, Smritis and Sutrs - have compared life to a journey. A journey needs to be thought through and planned in advance if one is to reach one's goal in the most efficient manner possible. If one wants to go from town A to town B (not known to the traveller) taking a specific period of time, one couldn't simply jump into a car and expect to get there! For a start, in order to drive the car, one would need to have taken driving lessons and to have passed the test. One needs to be able to understand the road signs. To drive through an unfamiliar town, if one is not to lose one's way, one needs to have directions, or a map, or an electronic navigational system! The vehicle needs to be roadworthy and to have fuel in its tank. In the same way, the great journey that is Life needs to have specified 'milestones', directions, objectives and destinations.

How can one achieve true happiness in life, making the most of the opportunities as they come, as well as dealing with the 'highs and lows' - the misfortunes and the challenging but unavoidable circumstances that are also part of an individual's experience?

The sixteen sanskars were devised by the ancient Hindu Rshis and sages following their observation of human life and based on their collective experience. The sanskars provide milestones on the seemingly bewildering complex journey of life, marking several key stages or developments. The sanskars take into account the fact that, as time progresses, a person undergoes physical, emotional, intellectual and spiritual development. An individual's ideas and attitudes change, the sense of responsibility and duty gradually dawns. The Chudakarm sanskar, e.g., is to be performed earlier than the Upanayan sanskar. The former has to do with a phase of early physical development, whereas the latter is performed later on when the child is ready to undergo intellectual development. The sanskars are thus devised so as not to clash with the natural progression of life, but to run in perfect harmony with it.

The sanskars serve to remind us of the direction our lives must be given, and of our duties and obligations to others. At the same time, these rituals inspire us to be an active and positive member of the society, contributing to its welfare. They help in the development of the individual so that one becomes aware of one's

i) identity-both on the physical as well as the metaphysical level, and 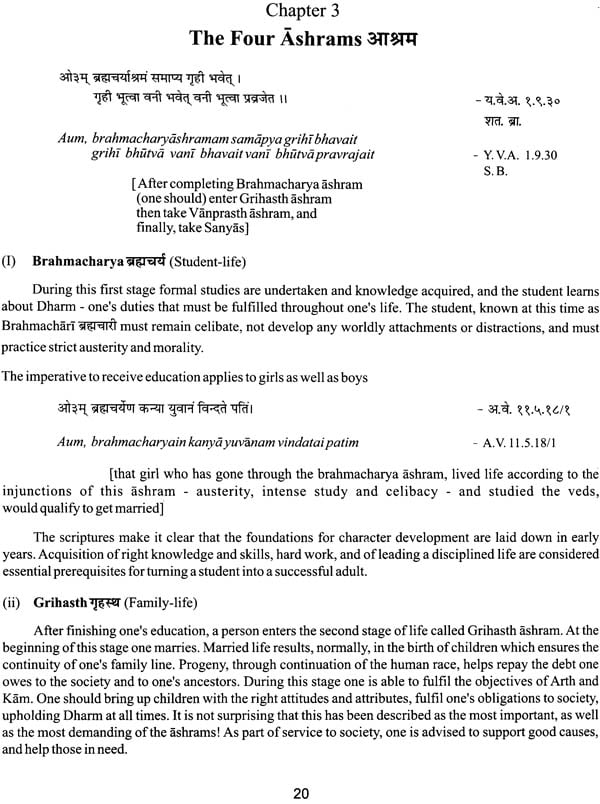 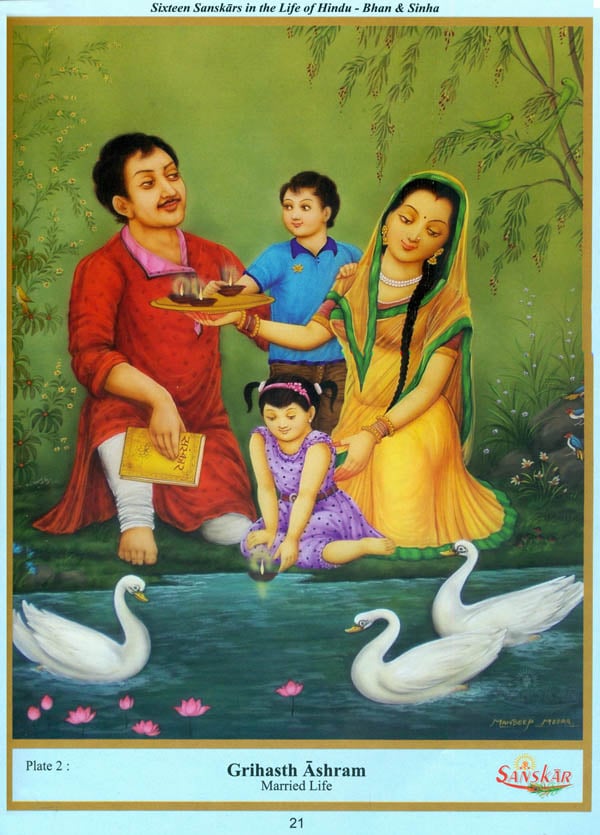 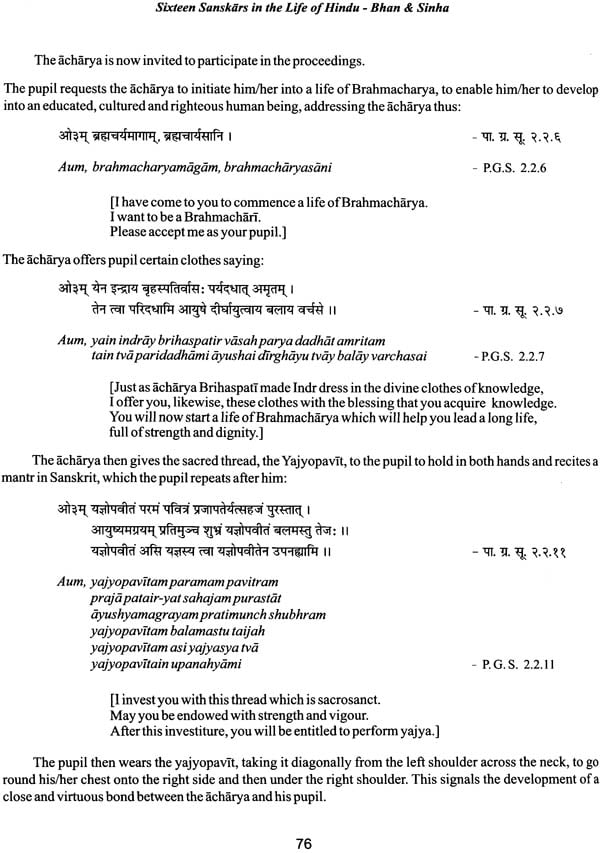 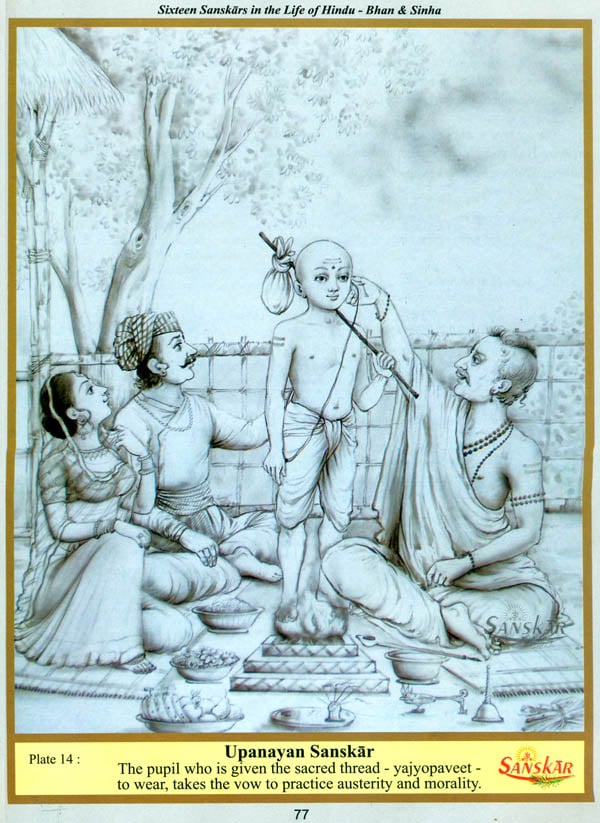 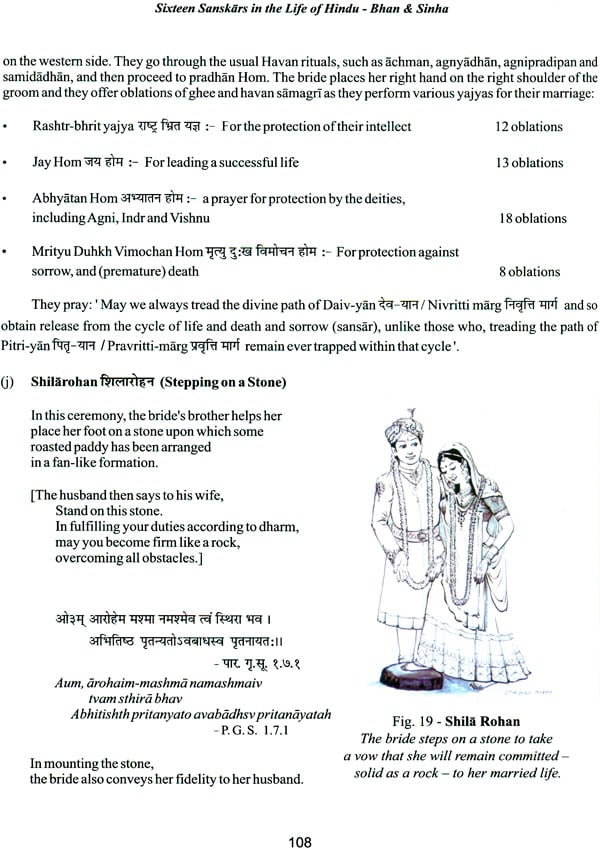 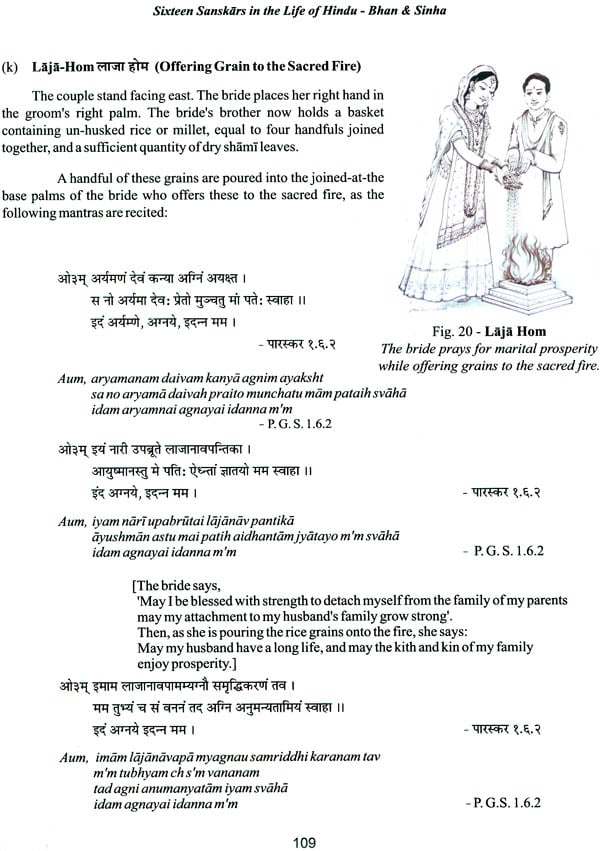 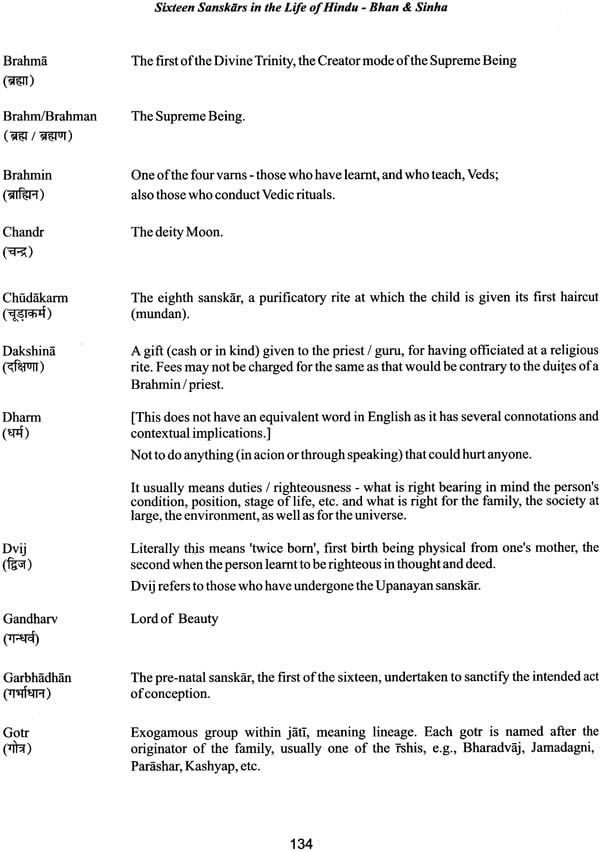 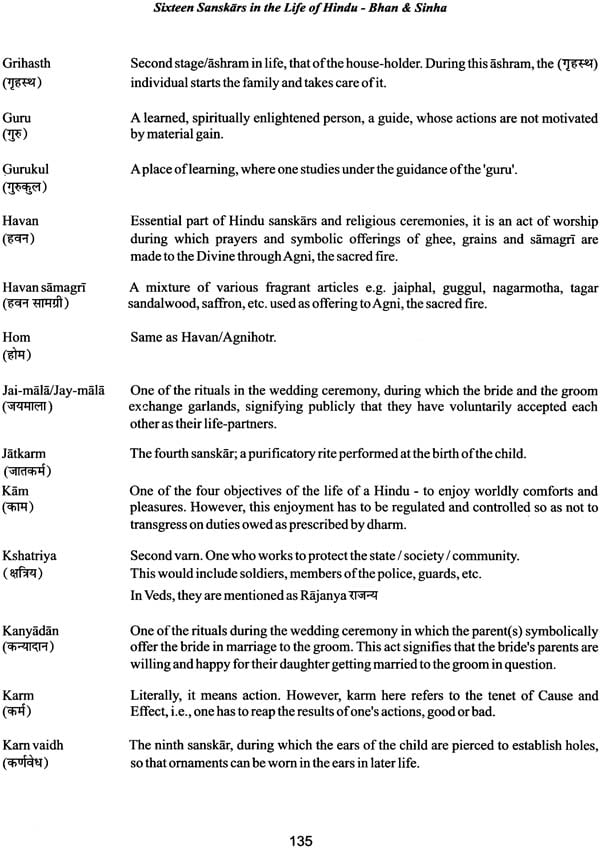 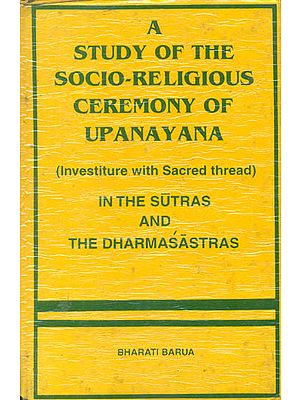 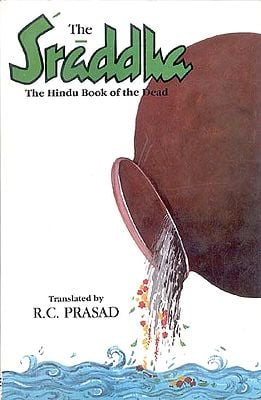 The Sraddha - The Hindu Book of the Dead
By R.C. Prasad
$16
Best Seller 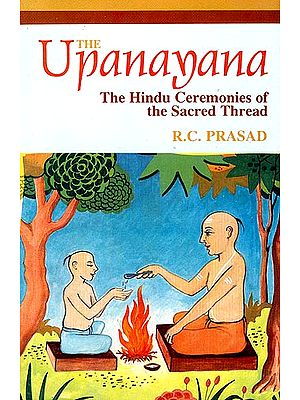 The Upanayana - The Hindu Ceremonies Of The Sacred Thread
By R.C. Prasad
$20
FREE Delivery
Best Seller
Add a review
Have A Question