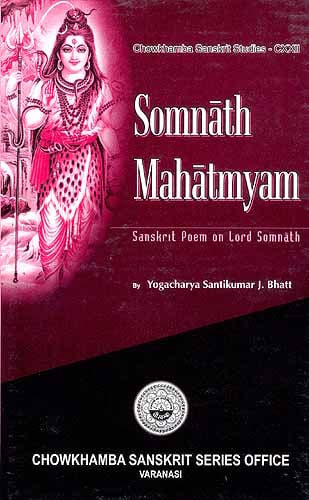 I have great pleasure in wiriting this Foreword for the Sanskrit poem Somenatha Mahatmayam composed by Shri Shantikumar J. Bhatt, Sahitya Ratna. Shri Bhatt's interests are indeed very wide and they include Law, Jurnalism, Yoga and Politics. His contrubution to Hindi, Gujarai and Sanskrit literature is also immense and also of quality. The very fact that he was awarded 'Sahitya Ratna' by Shri Shankaracharya, for his Sanskrit work on Saundarya-lahri is an eloquent testimony to his command over Sanskirt.

The presently poem deals with the history of celebrated temple of Somanath which occupies a unique position in the cultural life, not only of Gujarat, but also of the whole of India. The region found about, and the temple, both have a long hisgory going back to the days of Lord Krishna. In Mohamedan times, the temple of Somanath was almost a battle ground. Lord Siva has a unique hold on the Indian mind and it was, therefore, an occasion for general rejoicing and delight when the temple was renovated by the Government of India under the lead of late Sardar Vallabhbhai Patel.

Mr. Bhatt narrates all this history in his poem beginning from the days of Lord Krishna to the times of its renovation. Everywhere his style is racy and the language very simple. He has chosen an appropriate metre for a narrative poem and the monotony of the same has been relieved by the employment of other matres as well. Among the narrative poems in Sanskrit, produced in modern times, this poem by Shri Bhatt must be regarded as a meritorious performance and his translation in English which accompanies this poem is also equally clear and lucid. The value of this work is farther increased by the inclusion of the Four Stone Inscriptions and their translation. This is a signal service indeed, for otherwise these valuable inscriptions would have been lost to posterity or else remained unknown to the larger reading public. I am certain that the poem will be warmly welcomed by the lovers of Sanskrit and I wish Mr. Bhatt a yet fruitful creative period in times to come.

Lord Somnatha's temple at Prabhas Patan near Veraval in Saurashtra is one of the holiest places of pilgrimage since time immemorial. To Hindus God is Divine Light and Lord Shiva is known as such Divine Light and hence He is represented in gross form as the symbol of Light known as Jyotirlinga in Sanskrit. India has such twelve major places of pilgrimage where Lord Shiva is worshipped with great respect and ceremonial grandeur. Lord Shiva who is Divine Light is also the positive principle behind all creation and so He is represented in a particular form of an egg. This cosmic egg has the inherent and potential negative principle known as Primeval Energy (Adi Shakti) which is represented as Divine Mother, the Spouse of Lord Shiva. This is why in the temple of Lord Shiva the icon of Divine Mother known as Uma, Parvati, Ambika, etc. is installed.

Lord Shiva is also Lord of Cosmic Time principle. In Hinduism the serpent is symbolic of this principle of Cosmic Time. Hindus, thus are not worshippers of serpents and animals as ordinarily misunderstood and misrepresented by scholars who lack in deep and critical insight into Hindu philosophy.

A metalic or an earthen pitcher is hung over this serpent and drop by drop water falls on it from the pitcher symbolising the fact that the pitcher of the universe is full of Time which is passing out gradually Lord Shiva is also symbolic of Divine Fire. The drops of water from the pitcher keep the Divine Fire under control, by constantly cooling it.

When one goes farther, one finds the statue of a bull facing Shiva Lingam. The bull is symbolic of strength dedicated to God. Hindus worship strength which is dedicated only to Lord Shiva.

In front of the bull one finds the form of the tortoise on the floor. The tortoise is symbolic of control over senses under adverse circumstances.

Thus when a Hindu goes to the temple, he doesn't go there to worship something primitive, brutal, gross, meaningless and senseless but he worships there the highest human virtues symbolised by different icons. He is not so senseless as to worship different forms of stones, wood -or metals but through such forms he tries to inculcate the virtues attached to them, in his own life. Such worship has kept Hinduism fully alive today.

In India holy places are situated usually on the lap of Nature-on the mountains, on river-banks or on sea- shores where Nature invigorates, inspires and refreshes the visitors. The temple of Lord Somnatha is situated just on the sea-shore and the visitor feels freshness in the air 'and the music of the waves enchants the visitor. Since time immemorial the temple of Lord Somnatha stands here. The wrath of Nature and the onslaught of invaders have disintegrated it into debris again and again and the human will to create has built it again and again. This process of construction and destruction has continued till today and the present temple of Lord Somnatha is almost completed on the old site through the inspiring genius of Sardar Vallabhbhai Patel and the munificent donations by the royal family of Nawanagar State. Late Maharajah Digvijaysinha of Nawanagar State and present Rajmata Gulabkunverba have played a major part of being the saviour of this temple. Their financial bounties and active association with every stage of reconstruction of this temple of Lord Somnatha have raised the temple of to-day with exquisite architecture and sculpture. The faith and financial assistance by the devotees from all over India have speeded up this progress.

Judged from the modern view-point Lord Shiva is the first socialist who received the minimum from the society and gave maximum. His was a democratic government and gave dignified place to the downtrodden tribals of the Himalayas. He tried to please and correct the anti- social elements known as demons but when they trans- gressed all social obligations, He managed to eliminate them ruthlessly. He condemned hypocrisy in religion and managed to destroy the royal religious function arranged by Daksha, His father-in-law as it turned out to be a show-piece where Daksha's kiths and kins where kept away because of so-called social pride. He was the first God who wanted to establish a classless, casteless demo- cratic and socialistic society. He loves the devotees but He has greater love for those who are in difficulties or who .are in a mood of penitence. He expects no outward show. His worship is very simple and His temples almost in every village of India are the simplest structures. The illiteratre, the outcast, the tribal, the' aboriginal are all His worshippers. Even scholars find sometbing in Lord Shiva that invites their love. Truth, Gob-dness and Beauty are the cardinal principles of Hinduism and Lord Shiva represents the principle of Goodness. His very name means Goodness.

Lord Shiva is known also as Lord Somnatha, the Lord of the Moon because of the Pauranic and mythological tales about the moon being associated with Him. Prabhas Patan, the holy place where the temple of Lord Somnatha is situated has been the stage of many exploits, adven- tures and misadventures of gods, demons and human be- ings. I have tried to record them all,not as a historian but only with my poetic and spiritual fervour. 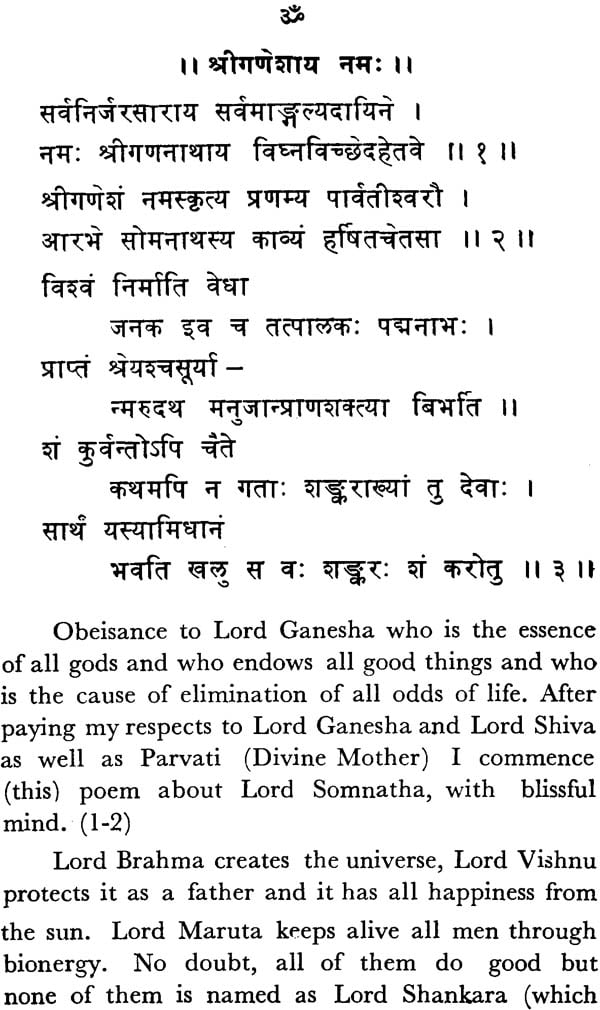 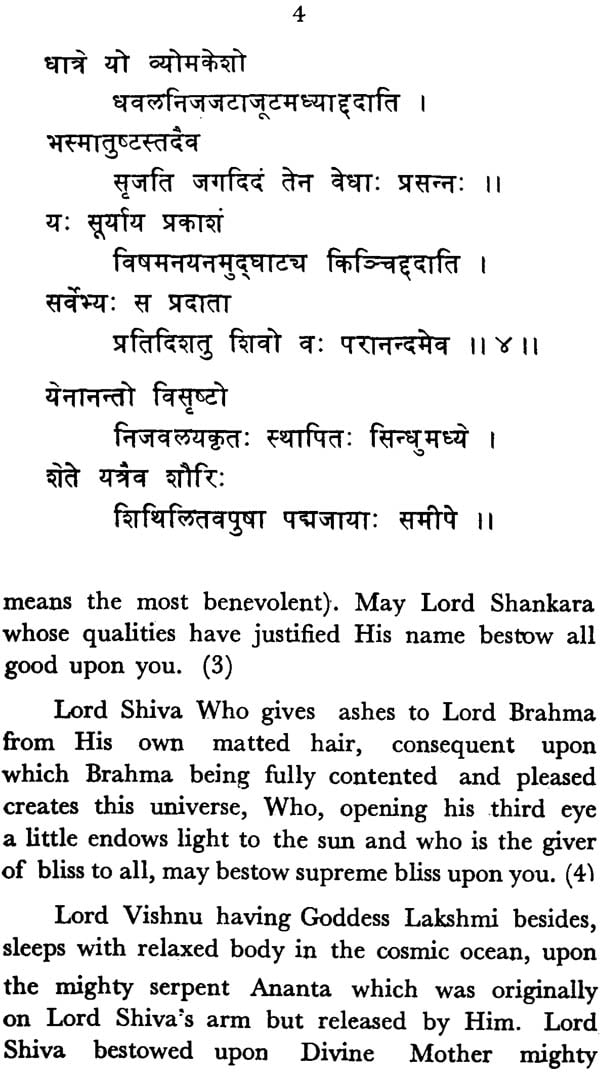 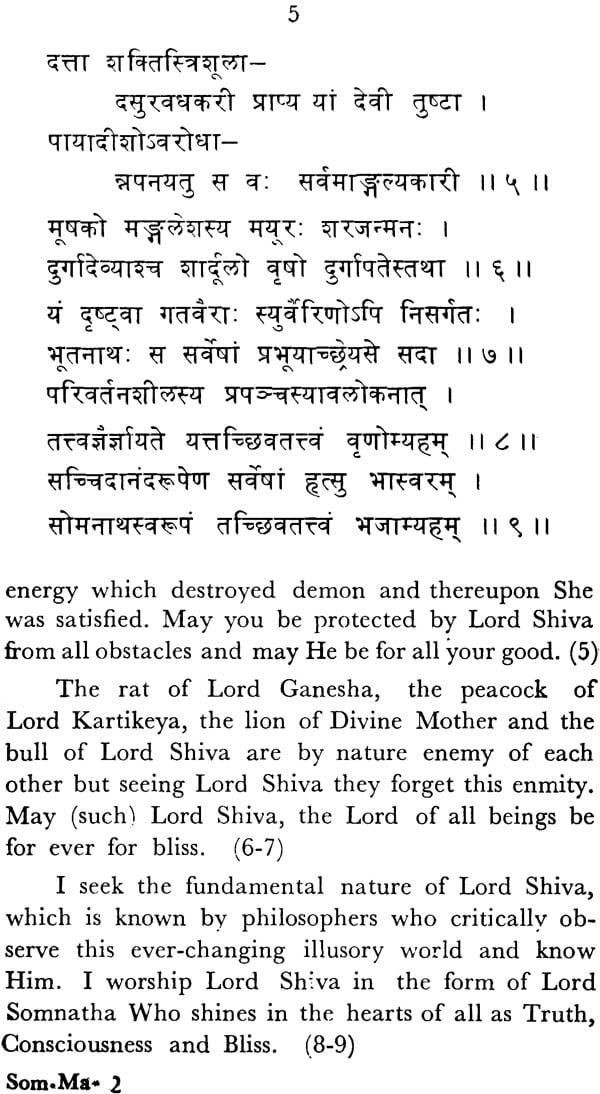 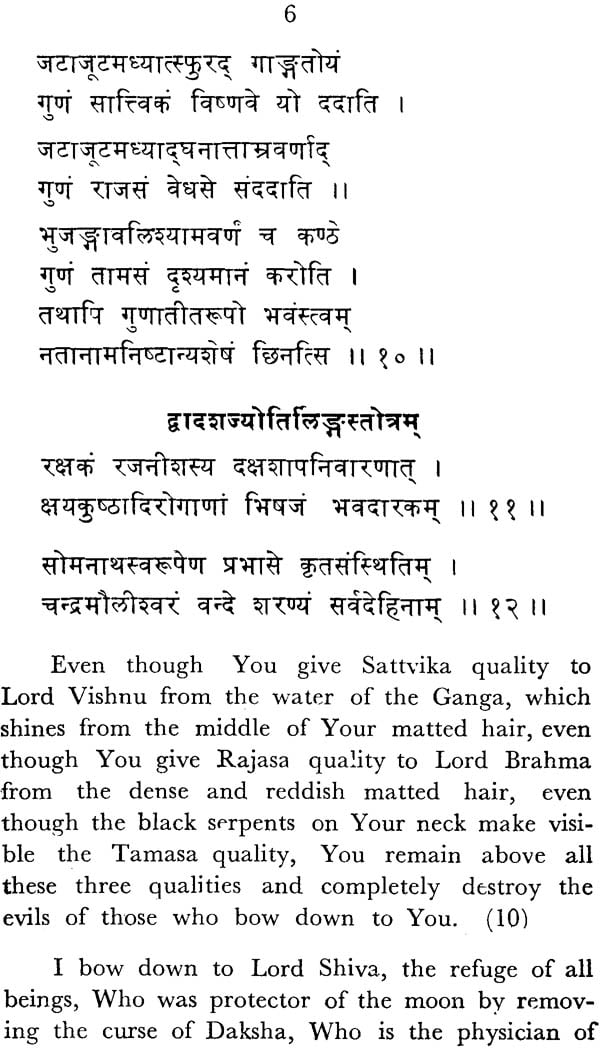 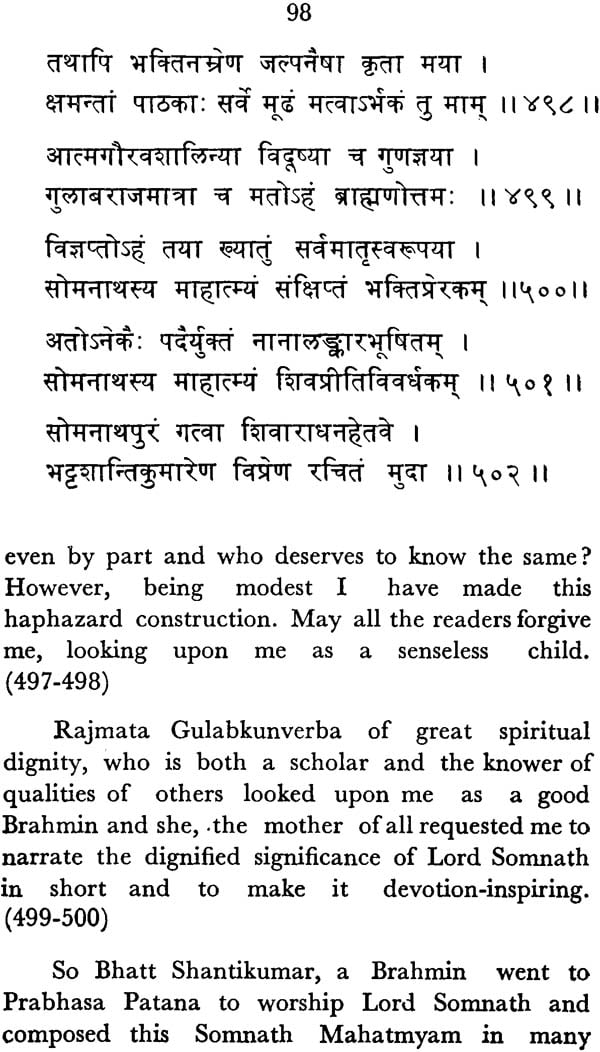 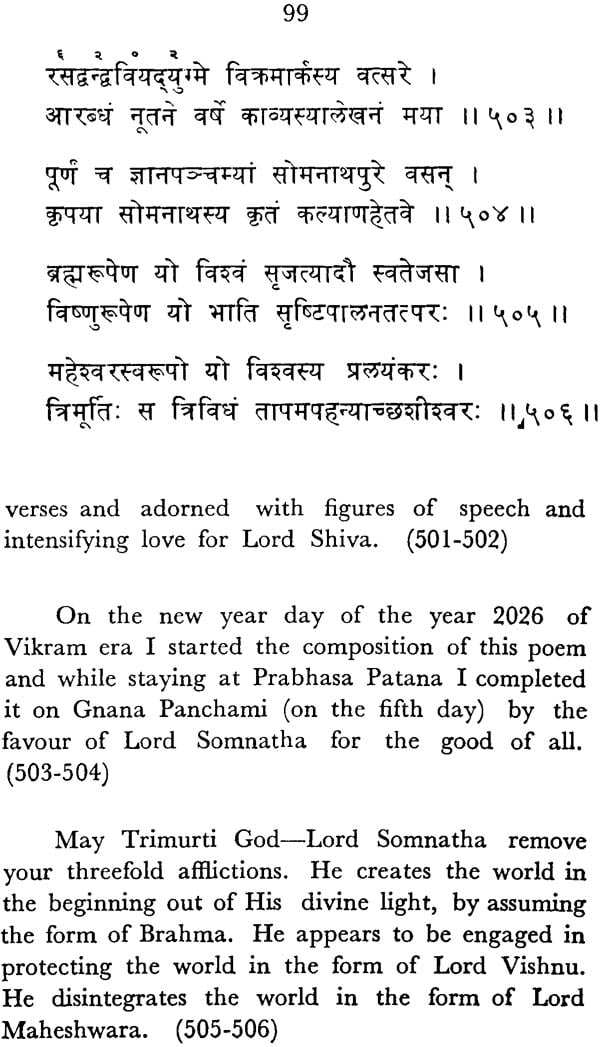 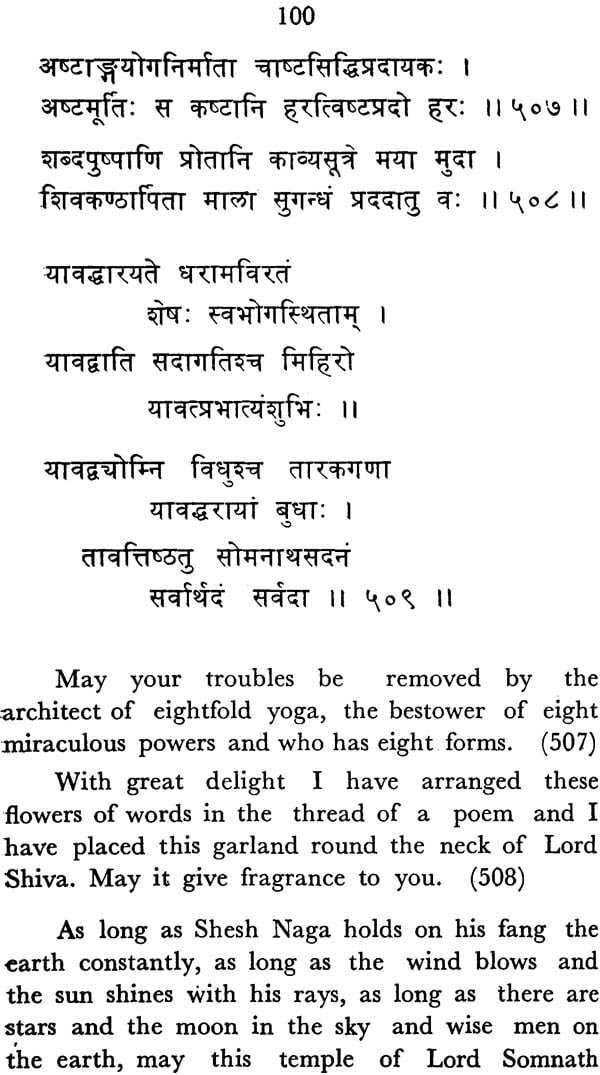 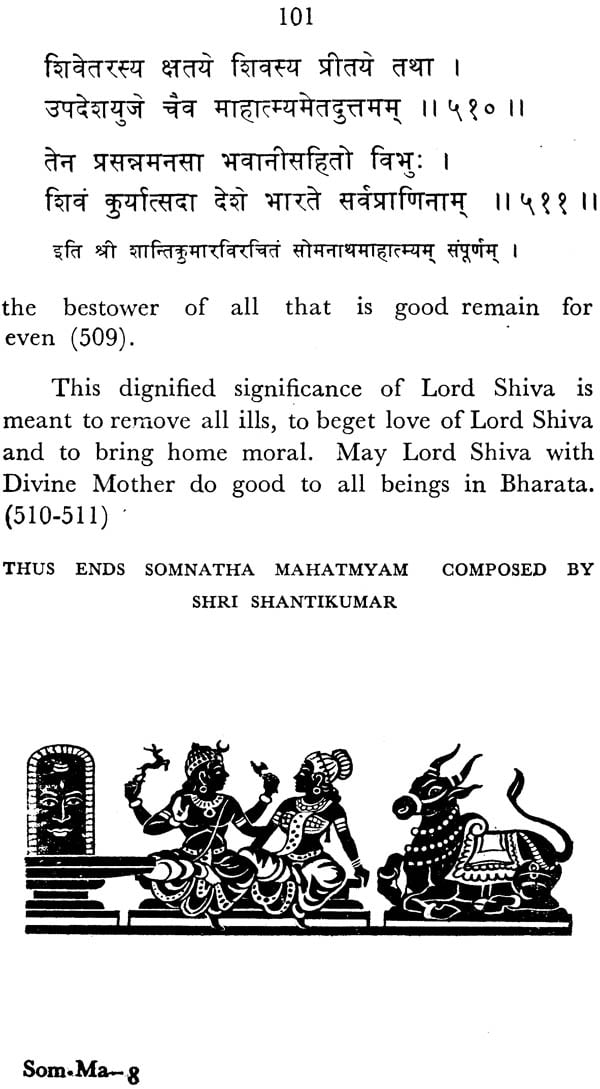