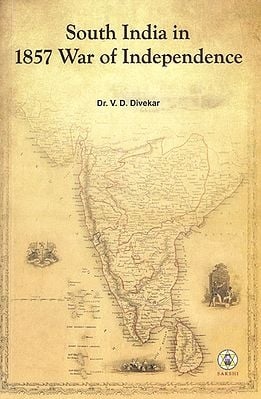 South India in 1857 War of Independence

The Lokmanya Tilak Smarak Trust, Pune, has undertaken the work of researching into the history of freedom movement in India in different parts of the country, with special emphasis on finding out the particulars regarding the contributions made by the common people and their leaders at the local level. The work covers the whole of India. Dr. V. D. Divekar has taken up the responsibility of organizing this work, on behalf of the Trust.

As part of this work, freedom fighters who were transported to the Andamans under the British rule, and who are still alive, were personally interviewed by him by visiting their places of residence in different parts of the country, including Bangladesh. A conference of them was convened at Bombay on 26-27 February 1991, wherein 55 of them, with their families, participated. A follow-up correspondence with them is continuing.

The official brochure brought out by the Andaman Administration lists about 25 freedom fighters who were transported to the Andamans in 1857. The research at the Tilak Smarak Trust in this regard has now uncovered more than 800 such names who were sent there from different regions in India and who belonged to different communities, for taking part in the 1857 War of Independence.

When work was taken up in hand, more and more events and names from South India started coming to light for the first time. It was, therefore, decided to pay particular attention to this rather research wise 'neglected' region.

It may be noted here that, out of the names of 800 Transportees to the Andamans in '1857', so far discovered, a little more than 250 are from South India. Similarly, a list of about 230 `Martyrs of (besides names of hundreds of others involved) from South India is presented in this work. It was thought by scholars from the days of Vinayak Damodar Savarkar (in 1907) to Surendra Nath Sen (in 1957) and even thereafter, that, very little happened in South India in '1857'. This is probably because the archives in South India, like those at Madras, Hyderabad, Bangalore, Panaji etc, had remained, so far, more or less untapped in this regard. No doubt, the army revolts were more in number in North India, yet the popular uprisings in south India were not fewer as the present work shows. The moral issues involved in the War of 1857 throughout India, either in the north or in the south, however, were the same. As Savarkar has precisely pointed out in his work, they were: protection of Swarajya and Swadharma on the Indian side; and expansion and consolidation of empire on the British side.

Research on the part played by South India in the freedom struggle is being undertaken at present by Dr. Divekar, as part of the total programme. Here again, the emphasis is on the common people and their local leaders. The present work is a product of his researches into this field. It brings to light for the first time not only the names of hundreds of freedom fighters, who sacrificed their lives in the '1857' War of Independence in South India, but also the fact, which is of equal importance, that, they belonged to different religions, castes, creeds, regions, language groups, etc. Hindus and Muslims fought shoulder to shoulder in this War; so also other sections of society, as tribals, army men, peasants, etc.

Thus, the work undertaken by the Lokmanya Tilak Smarak Trust is of historical nature, and still, it has a practical approach. In simple terms, it aims at promoting common feelings among the people, by bringing to light the great sacrifices made by their forefathers, of whatever race, region or religion in India, so that Mother India be free from the foreign yoke.

India's struggle for freedom from the yoke of British imperialism was a long drawn out phenomenon which spread over more than a century and the coveted freedom finally came as a result or several movements and circumstances. During the period of the freedom struggle, there were various strands of political movements and repressions, of both violent and non-violent nature, and there also came to be evolved many issues and institutions of political, constitutional, economic and social transformations. The result was today's political democratic pattern of Government. India's Independence is structured on that basis,

With the spread of the British rule, beginning from the 19th century, Indians were made to suffer the brunt of political subjugation, colonial, economic exploitation and racial discrimination. As and when the British rule established in any part of the country, the local people concerned suffered socially, economically and politically and rose often in revolt against it.

India is a vast country. Moreover, it is a multilingual nation, having separate historical backgrounds and problems. The War Of Independence of 1857, however, was the first outbreak on a national scale, when, crossing all regional, linguistic, religious and social barriers, the people of India everywhere generally, got involved into it. The knowledge of the part played by local leaders and the common people in it at different places is, therefore, even academically speaking, essential in order to understand better the nature and extent of that war.

The common notion that South India played no part in '1857', or, that it was only a `Sepoy War', is based on general unawareness of historical facts. These facts are brought together for the first time in this book by Dr. V. D. Divekar, through his researches carried on at the Lokmanya Tilak Smarak Mandir, Pune. As he cautions the readers at the outset in his Introduction, the present work may not be a full-length history of South India in the 1857 War. Yet we do get here important details relating to the role played by the common people and their local leaders, at the grass-roots level, in that War. This, indeed, is a very important contribution to the present knowledge of historical facts.

I first came to know about the nature of Dr. Divekar's research a couple of years ago when he visited Delhi. Later, when I had been to Pune, I had the privilege of visiting the Tilak Smarak Mandir and seeing for myself the dedication and the scholarly discipline with which the painstaking research was carried on by Dr. Divekar there. I am, indeed, happy to have extended some help to him in his research in the Archives in South India.

I congratulate Dr. V. D. Divekar and also the Lokmanya Tilak Smarak Trust and its Chairman, Shri J. S. Tilak for undertaking this research of great national importance and publishing it in a book form and making a very valuable and significant contribution to the immemorable historical events relating to the 1857 War of Independence.

This work is aimed at highlighting, in general, the role played by South India in the 1857 War of Independence; and in particular, it tries to bring to light, the names of individual freedom fighters who laid down their lives, or, were transported beyond the seas, or, suffered otherwise for their participation in the freedom struggle in '1857' in South India. It is, therefore, not so much the intention here to present a detailed account, or a fuller history of '1857' in South India; although that branch of historical research has still remained mostly neglected by scholars and needs to be undertaken seriously.

From the following pages it could be seen that, ever since the establishment of British power in any part of South India, it met, occasionally, with resistance from local people under local leaders everywhere - be it in Maharashtra, Goa, Karnataka, Andhra Pradesh, Tamil Nadu or Kerala. But all such attempts remained confined to smaller areas or regions concerned, and did not, till '1857', assume national character, covering the whole of the country all at one time. In fact, such phenomenon of nation-wide simultaneous resistance to a foreign power was happening in the history of India for the first time in '1857'.

From the Chronology given in Part One of this work, it may be noticed that the situation for the commencement of the War of '1857' was getting ripe in different regions in South India from about 1854 or so. In the last months of 1856, definitive attempts were made by leaders such as Rango Bapuji of Satara to recruit an army to fight against the British rule. Similarly, in other areas, as in Kolhapur, Anna Phadnis and Tatya Mohite; in Hyderabad Maulvi Syed Alauddin, Sonaji Pandit and others; in Goa, Dipuji Rane; in North Arcot, Syed Kusa, etc., were working towards this end.

There were several reasons, concomitant of expansion of British rule in South India, for the anti-British feelings to become strong and universal all over the region. The British Government, as a matter of policy, decided, from the late 1830s to reduce the amount of area which was called, 'alienated land' held by the Indian chieftains. Thus, the Saranjami Vatan of Chinchani in Maharashtra was one of the first that lapsed to the British Government in 1836. This was followed by Nipani in 1840, a Miraj Branch in 1842, another Miraj Branch in 1845, Tasgaon in 1848 and Shedbal in 1857. The Inam Commission, which sat from 1843, to ascertain the inam rights of the families, in the Bombay Presidency, received 35,000 applications claiming the inam rights. Out of them, claims of not less than 21,000 families were rejected by the Commission. Similar was the situation in the Madras Presidency. It is, therefore, no wonder that the Zamindars and Desais such as those of Jamboti, Nipani, or, the Nawab of Carnatic and others, who lost their earlier economic, social and political positions, joined the ranks of those nursing anti-British feelings in their minds.

Also, there were instances of armed bloody challenges to the foreign government by local chieftains, as in Kittur in Karnataka by Rani Channamma in 1824 and again by Sangoli Rayanna in 1830; by Dipuji Rane in Goa from 1852 and onwards.

From the early 1850s, the Christian missionary activities and the arrogant, and in some cases, violent behaviour of the Christian leaders, protected by the British administration and the judiciary, added greatly to the sense of injustice among the people. The Madras Native Association, founded in Madras in 1852, later drew pointed attention of the British Government to such injustices done to the people. The Madras Association also memorialized the grievances of the people due to increase in land revenue, non-preservation of reservoirs and channels causing decline in agriculture, miserable condition of ryots, etc. 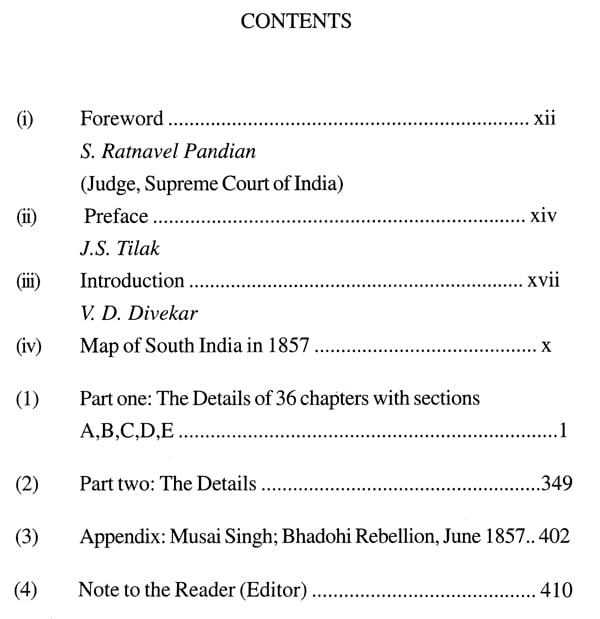 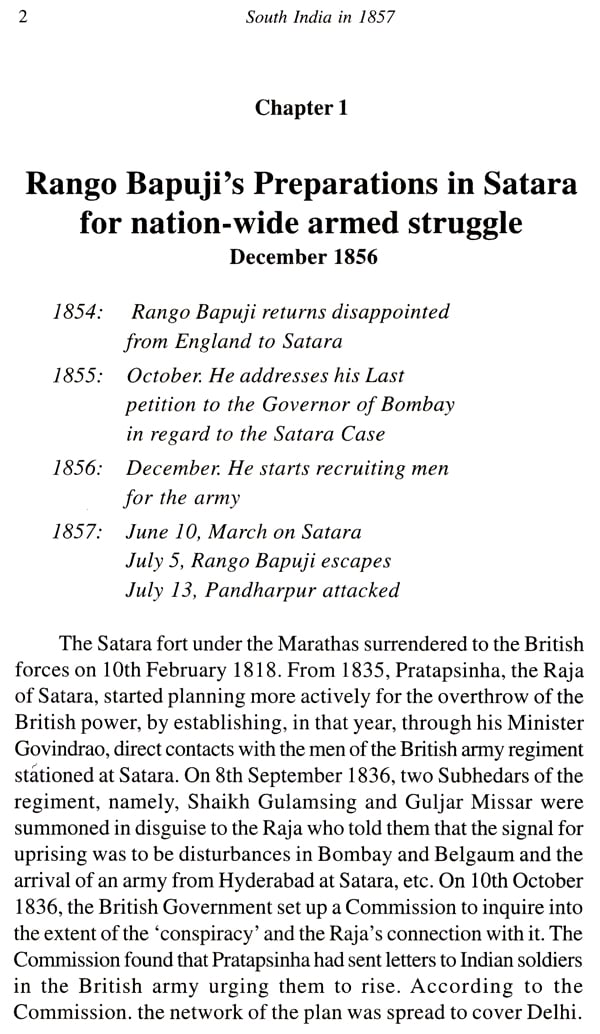 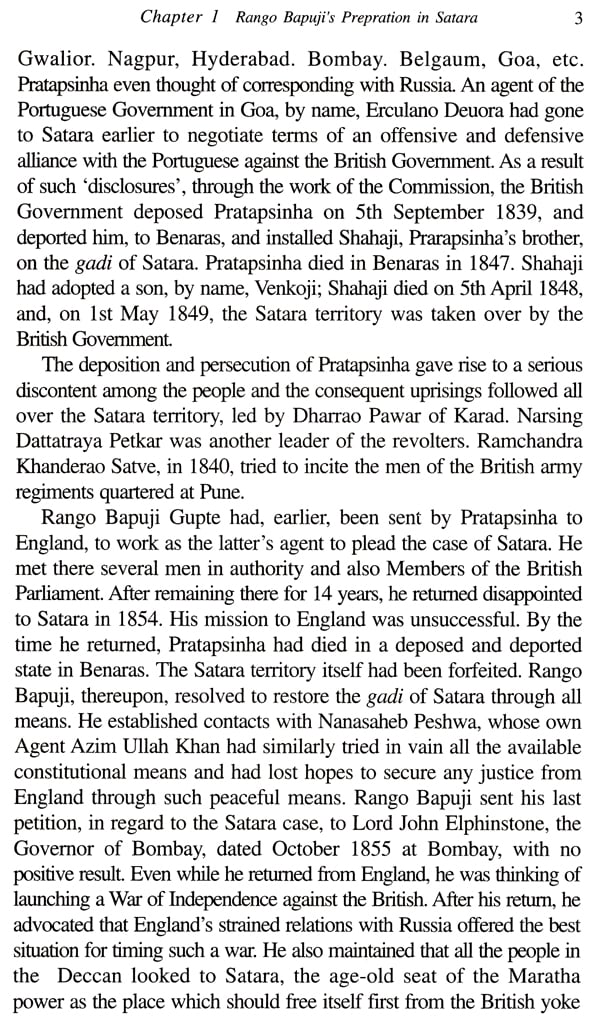 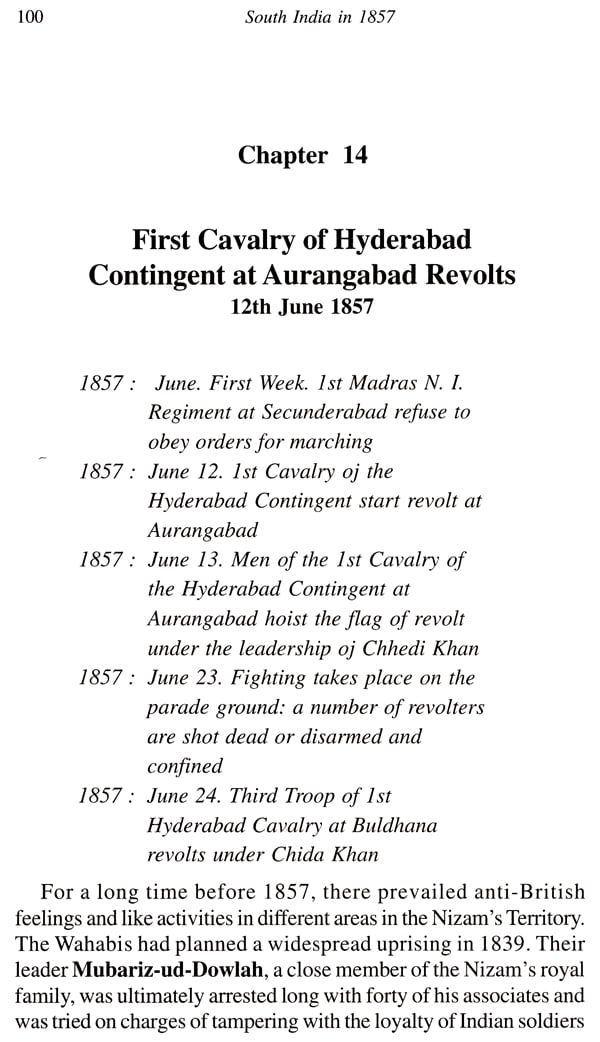 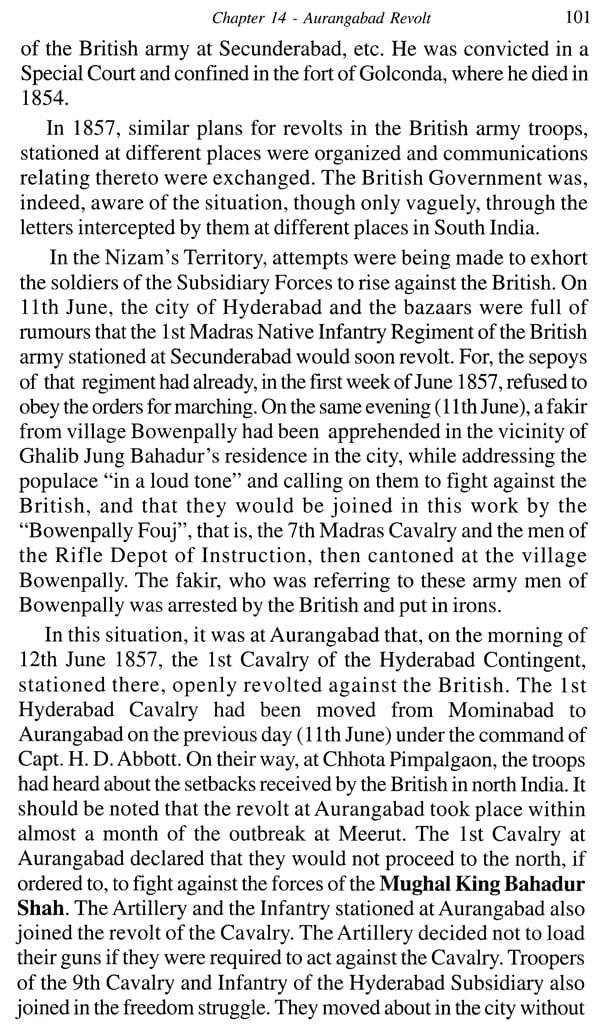 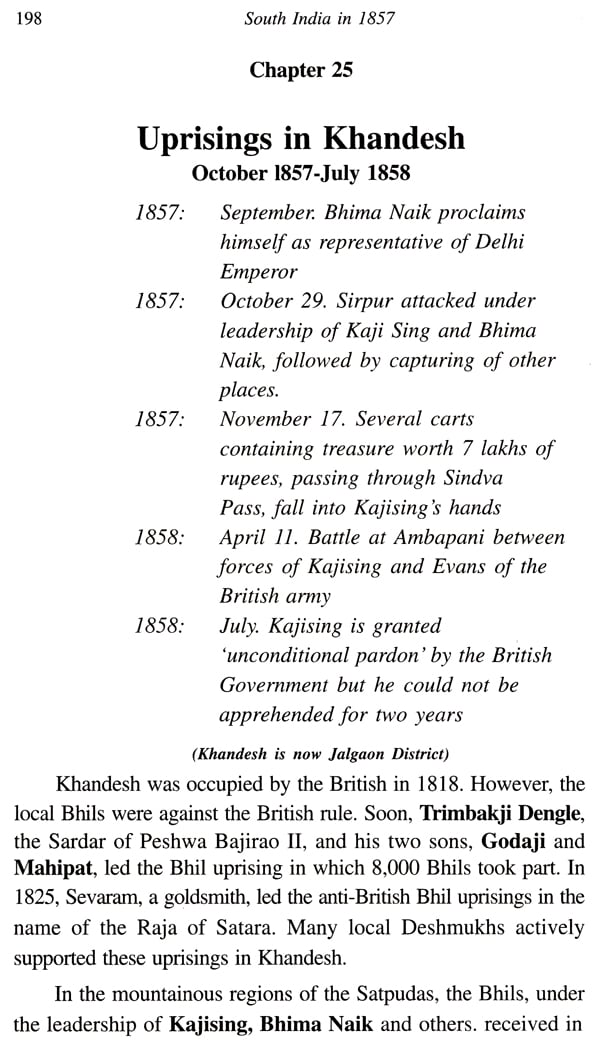 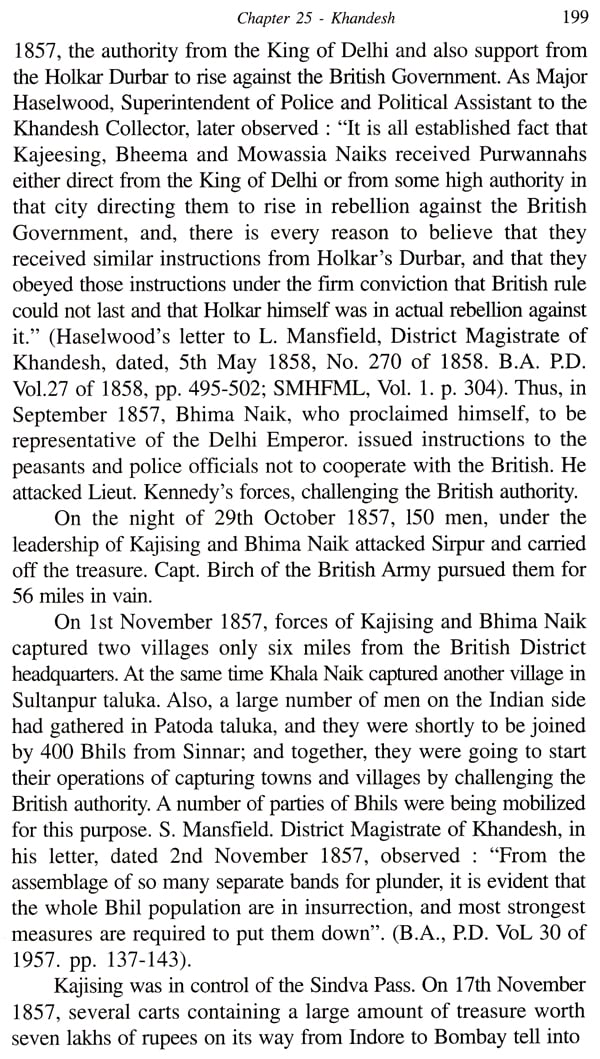 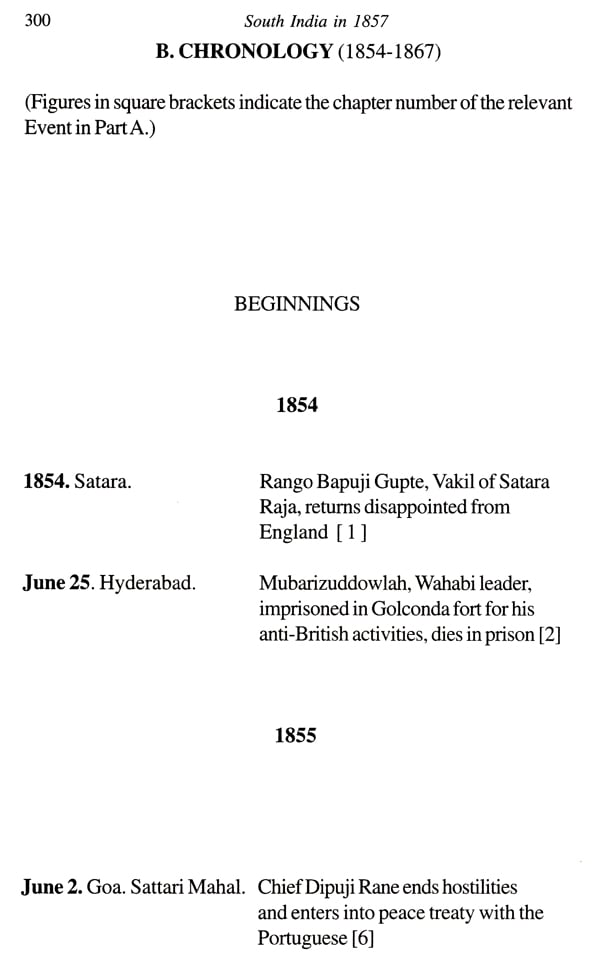 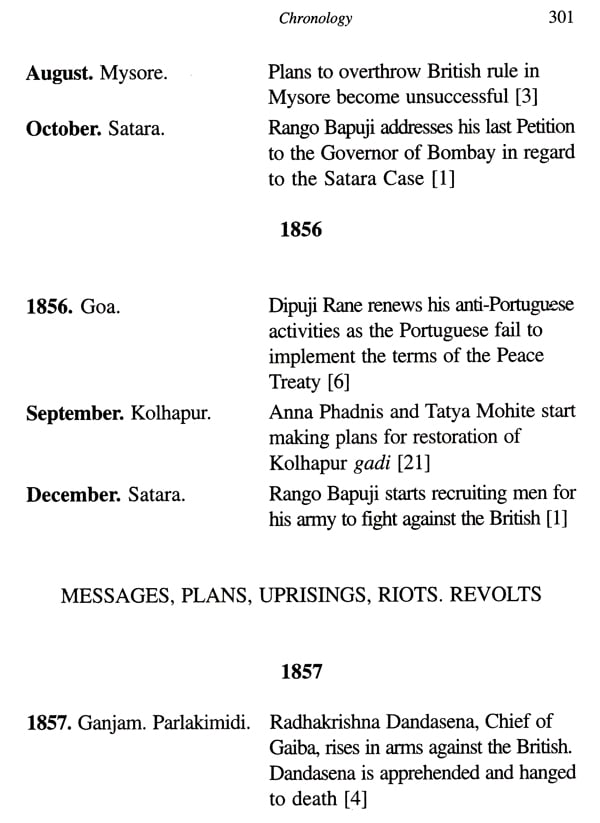 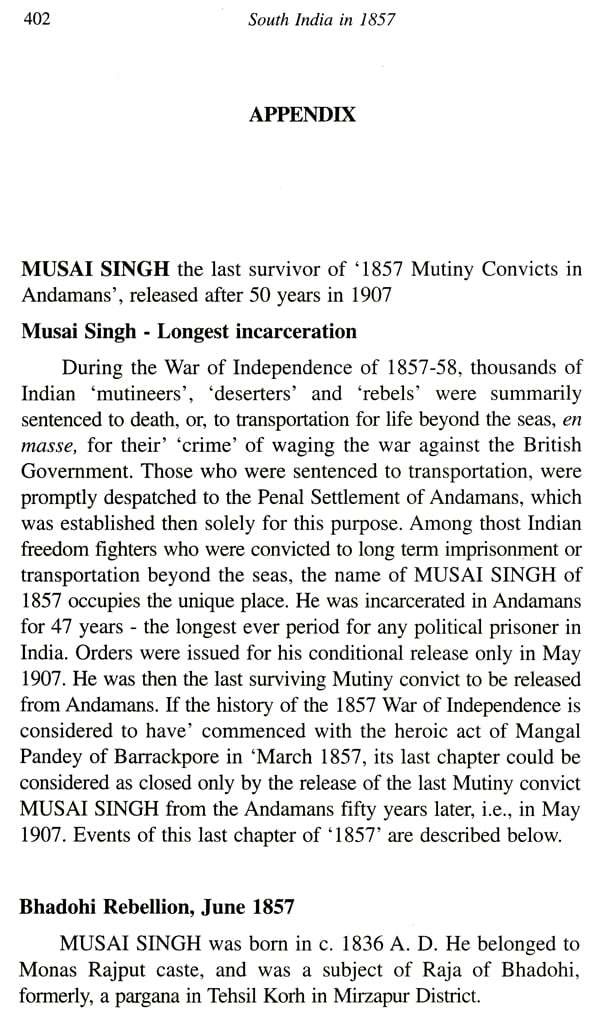 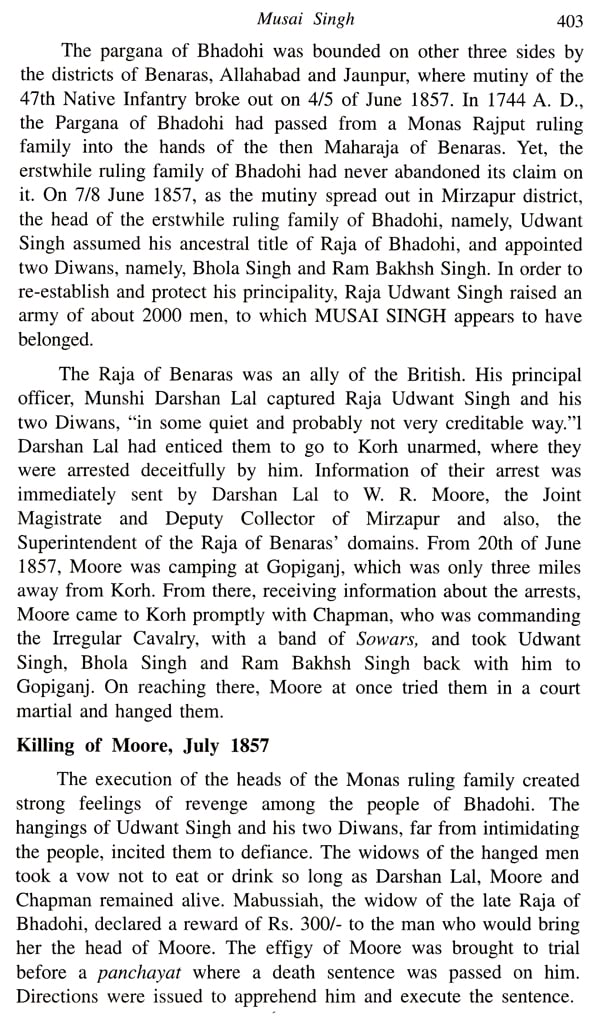