The Tale of My Exile (Twelve Years in The Andamans)

Barindra Kumar Ghose, Sri Aurobindo’s younger brother, was convicted in the Alipore Bomb Case and sentenced to death on 6 May 1909, while Sri Aurobindo was acquitted on the same day. Later, in 1910, following an adesh, Sri Aurobindo reached Pondicherry on 4th April where he would remain in a state of voluntary exile and carry out his Yoga of Transformation and spiritual actions till he passed away on 5 December 1950.

Upon appeal to the High Court, on 23 November 1909, Barin’s sentence was commuted to transportation for life in the Andaman Cellular Jail. On 12 December 1909, he and six of his prison mates were taken on board the SS Maharaja from the Kidderpore docks in Calcutta for Port Blair, Andamans. Other revolutionaries like Sudhir Kumar Sarkar went in the second batch. Brain was released in January 1920 thanks to a general amnesty, granted after World War I to selected political prisoners, in the form of a Government of India Act passed on 23 December 1919.

Back on the mainland, under the guidance of Deshbandhu Chittaranjan Das, Barin initially severed as the editor das, Brain initially served as the editor of Narayan Patrika, and went on to edit several other journals and periodical such as Bijali and Dainik Basumati. He lived in Pondicherry from 1923 till 1929 under the spiritual guidance of Sri Aurobindo. Back in Calcutta, he participated actively in the cultural life of Bengal till his passing in 1959.

Barin remained in touch with Sri Aurobindo and the Mother on spiritual matters and rendered valuable service to therm. Sri Aurobindo wrote several important letters to him that have a lasting significance.

The Tale of My Exile, now unavailable in the public domain for more than half a century, is a valuable cultural document that illuminates our understanding of a chapter of the nation’s history, now sadly forgotten. The work was first published in Bengali as Dwipantaren Katha in 1920 by Brain. It addresses issues that have become central to contemporary times. It examines the conection between Yoga and national liberation that was integral to Sri Aurobindo’s own thinking in the early days of his career. It centrestages the sociology of cruelty and the problem of dealing with cultural memory – issues that continue to haunt the contemporary world.

It is hoped that the book, reprinted now with an introduction, will interest a new generation of readers.

Reconstructing the life and times of Barin Ghose turned out to be more difficult than earlier envisaged. Books and material on Barin are scarce, and are for the most part in Bengali. Very few of his contemporaries who knew him have survived.

I must express sincere gratitude to K. Narayana Chandran, Biswajit Gangopadhyaya and Raman Reddy, each of whom read the manuscript very closely and made valuable suggestions.

We are grateful to Sri Kamalaksya Gangopadhyay, renowned artist from Kolkata, for the beautiful cover design of the book.

Why should one read a prison narrative that dates back to the twenties of the last century and is now thought to be extinct? What could the protagonist of this prison tale possibly mean to a generation to whom the national freedom struggle is largely a matter of textbook history?

The answers to the questions lie in the importance of cultural memories. Tales of penal colonies are not just of antiquarian value. In a fundamental sense, they underline the crisis of our contemporary age. Their claim to contemporary attention is vindicated when we visit terms such as terror, militancy, governance and citizenship that punctuate our political landscape today.

The Tale of My Exile by Barindra Kumar Ghose, Arya Office, Pondicherry, 1922, unveils the machinations of the colonial mind and the regimes of tyranny. These regimes are not dated. The systems of regimentation they envision have parallels in the ideological apparatus of Third Reich and the Gulag Archipelago. They continue in the twenty-first century as well. To try and understand the incarceration narrative of Barin Ghose, we must locate the tale in our contemporary times.

In the popular imagination in Indian, Kala Pani, or the Black Waters, has served, for long, as a terrifying metaphor for the tyranny of the Raj. It is a constant reminder to the patriotic-minded about the sacrifice of those who challenged the image of the Empire and were banished to its farthest corners as an act of savage retribution. The image of nears as an act of savage retribution. The image of the brave and hapless victims, left to suffer and die their pitiable deaths in the Andaman Islands infested with leeches, mosquitoes, and the dreaded headhunters, the Jarawas, has been part of our troubled national memory.

Important as these narratives are as incarceration tales, they have overshadowed, perhaps because of their emotive value, other equally important aspects of the systems of punishment characteristic of colonial regimes. Cultural studies of penal colonies, here and elsewhere, such as the Devil’s Island or the Dry Guillotine in French Guyana, are important not just for understanding the nature of crime and punishment in the farthest empires, they are also indicative of the manner in which work and leisure have been perceived in colonial states and continue to be perceived the postcolonial context.

Clearly, these narratives have lessons for the way we define and view work in late capitalism. Penal narratives also gain important meaning from our reading of the Holocaust that led to the extermination of Jews during World War II. History, sociology, literature and ethnography can creatively come together in this domain to generate meaning that have cross-disciplinary value. They disprove popular stereotypes and easy generalizations and complicated the ways we view memories dealing with our historical past.

For instance, it has been held near axiomatic by popular conception that penal colonies came up exclusively for mating out exemplary punishment to the deviants in the colonial systems of governance. For obvious nationalistic reasons, attention in the Andamans has centred on the political prisoners. However, it must be added that the Islands, in particular, the Ross, Chatham, the Viper and the Settlements at Port Blair, also served as vital strategic interests of the British, as a gateway to the strait of Malacca, the Indonesian Archipelago, Southeast Asia and waterways leading to the Far East.

Once the islands were identified as important, there had to be policy of settlement. Who would be brought to these inhospitable islands and with what incentives, was a question the colonial State had answer. Similarly, a lesser known fact is that ordinary convicts accused of serious crimes comprised as large a number as those who came as political prisoners.

For a better understanding, the Andaman’s penal experience could be divided into two main phases: from 1857 to 1900 and from1906, when the Cellular Jail’s construction was completed, to 1938, when the penal systems was officially disbanded thanks to sustained political agitation in British Indian and the remaining prisoners were repatriated to the mainland.

The first phase was during the first war of Indian Independence when large numbers of prisoners were sent to the Andamans. In the second phase, prisoners were taken to the Cellular Jail from 1906 until the system was officially disbanded in 1938.

My primary goal here is not to offer a historical account of the two periods in the manner of narrative history. That has been fairly well documented in several volumes although they may not be well known in the popular mind. Rather, intend to combine narrative history with a postcolonial reading of Barindra Kumar Ghose’s The Tale of My Exile (1922). 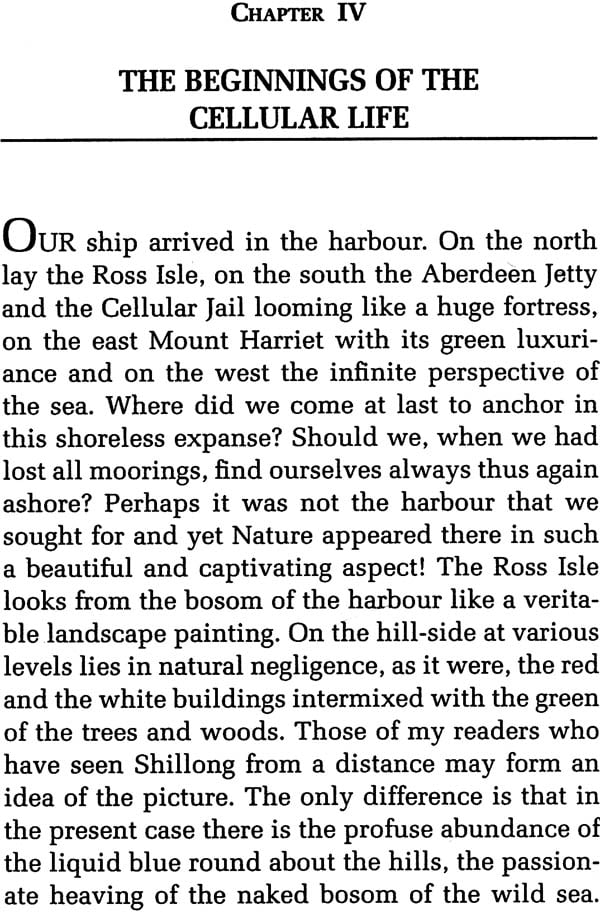 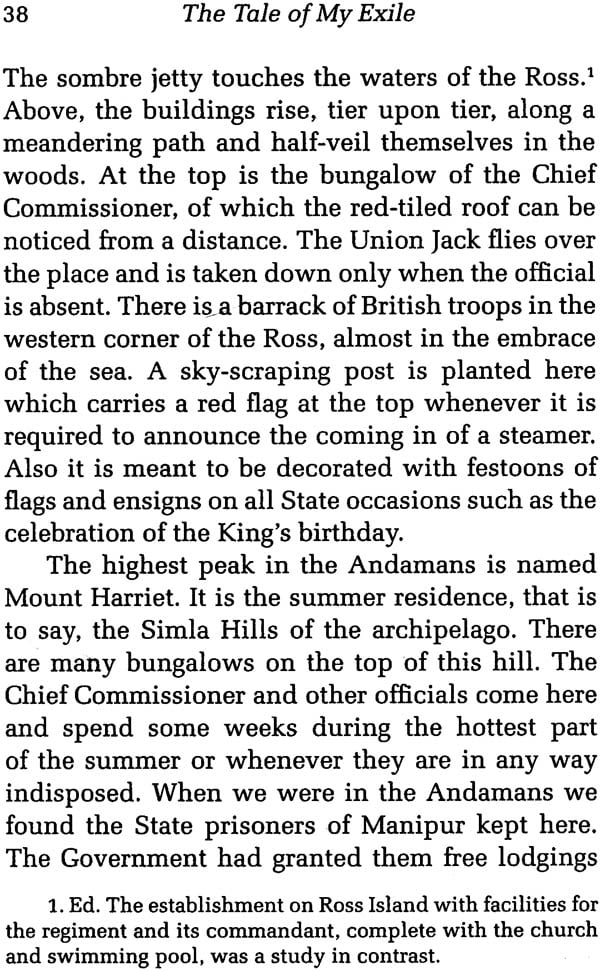 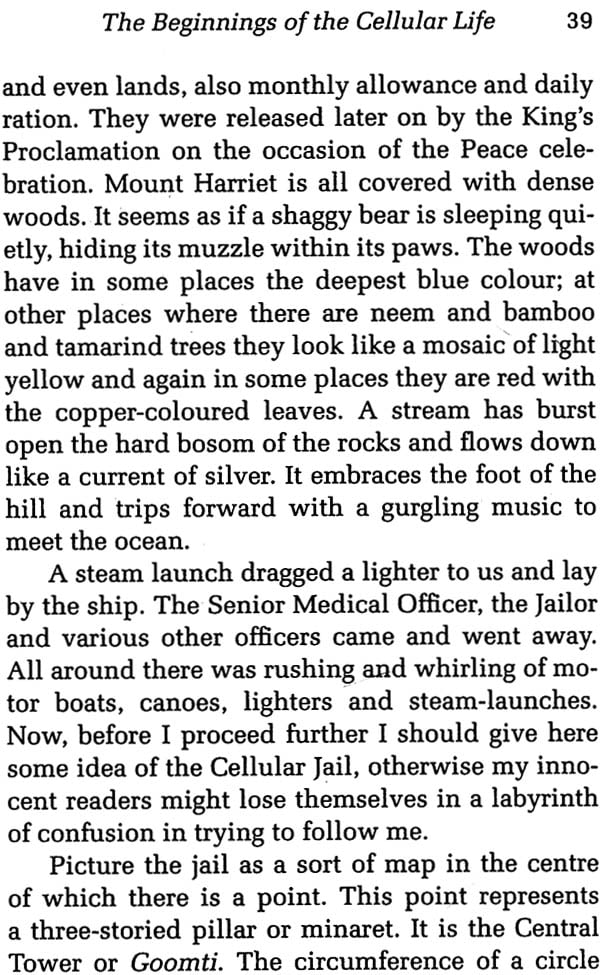 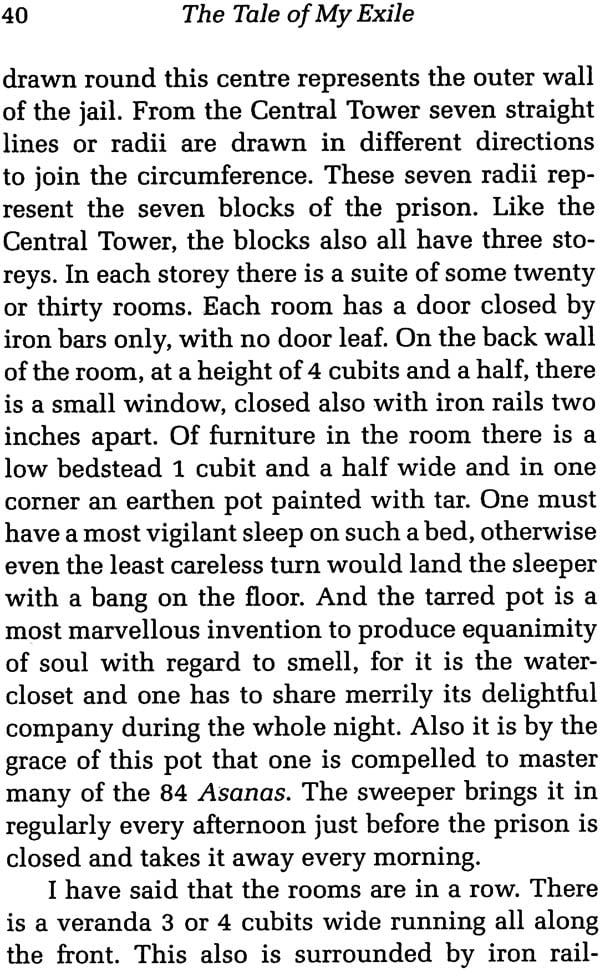 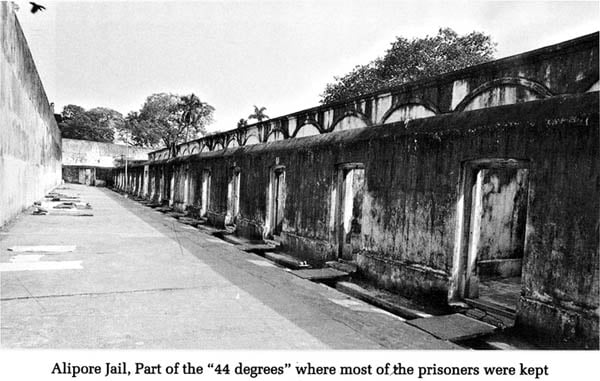 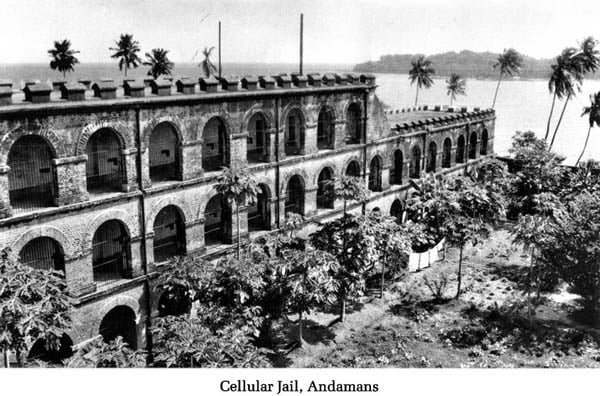 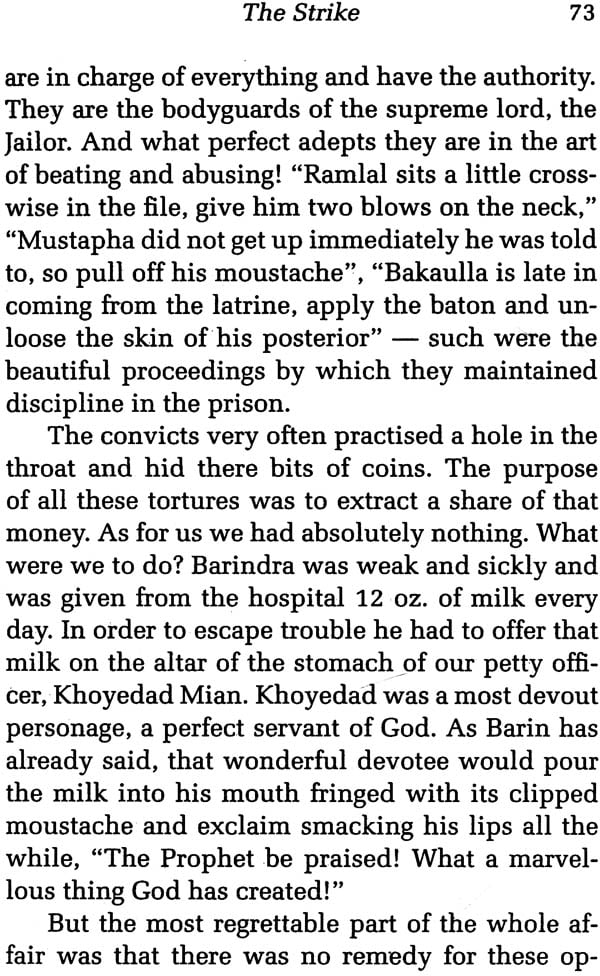 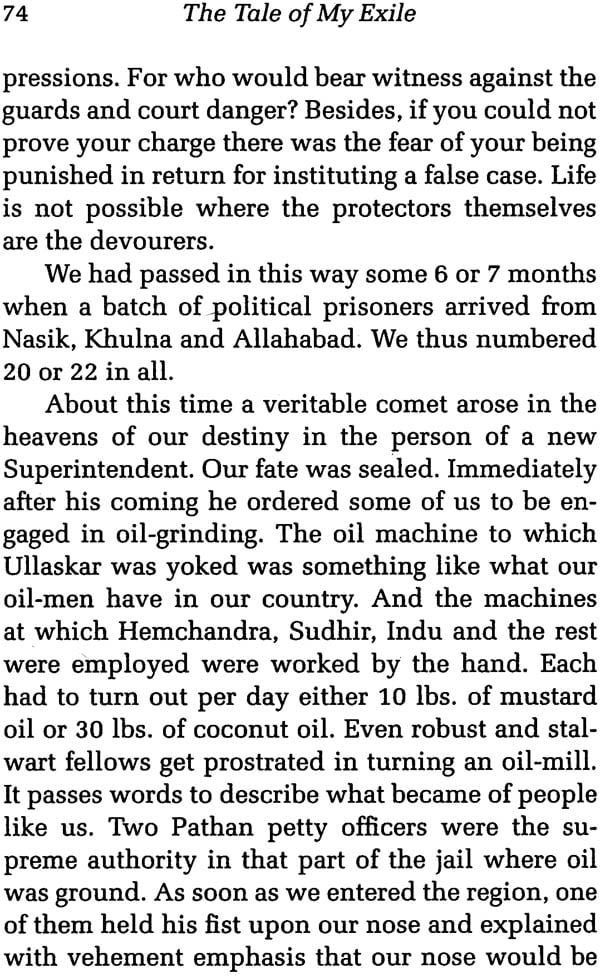 My Transportation for Life
By Veer Savarkar
$43
FREE Delivery Common Indian Wild Flowers
By Isaac Kehimkar
$29
Out of Stock Travel Writing and the Empire
By Sachidananda Mohanty
$19