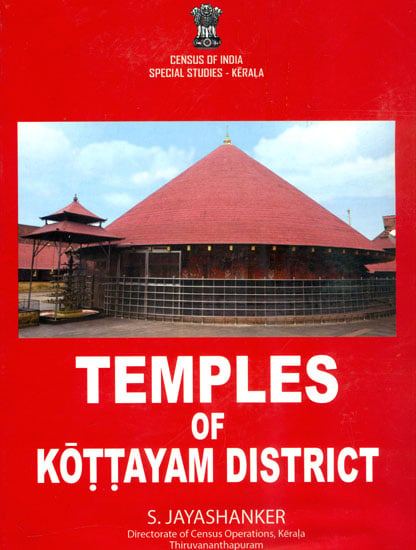 The background of taking up this exhaustive study needs little elaboration. The Census Organization of India undertook a study on temples of Madras State as an ancillary study of the 1961 census. This study evoked keen interest among scholars, the Government and statutory bodies of Kerala. Late Sree R. Vasudeva Poduval a renowned Archaeologist, requested the Registrar General, India (late Sree A. Chandrasekhar) as early as 1969 to launch a study on temples of Kerala similar to the one that was conducted in Madras state and the latter readily agreed to this suggestion. But the study could not be taken up due to heavy pressure of work in connection with the 1971 census. In 1973, the Travancore Devaswam Board also came up with a similar request, but the backlog of census work of 1971 census stood in the way in launching the study. In 1979 the Advisor to the Government of Kerala on Temples and Traditional Arts again requested the Director of Census Operations to commence the study. But again some unforeseen circumstances prevented the organization from taking up the study. However, in May 1990, the Government of Kerala again requested the Census Directorate to take up a detailed survey on temples of Kerala and the then Registrar General (Sree A.R. Nanda I.A.S.) directed to commence the survey in June 1991. The schedule, which was canvassed throughout the State, was finalized in consultation with tantris and silpis. Sree A.R. Nanda, I.A.S. (former Registrar General, India), Dr. K. P. Ittaman (former Deputy Registrar General, India) and Sree K.C. Narayana Kurup (former Deputy Director of Census Operations, Madras) gave invaluable suggestions in designing and finalizing the schedule. The schedules were printed in September 1991 and the work commenced.

Originally it was decided to collect data on temples by mailing the schedules to temple authorities of statutory bodies and by deputing trained field staff to temples exclusively managed by private individuals and institutions. But this procedure did not work well as the response from the statutory bodies was found defective as the filled-in schedules had both content and coverage errors. Therefore, in March'1992, it was decided to engage a small team of trained staff of the Directorate of Census Operations, Kerala for the field-study. The survey covered all temples, which are open to public, irrespective of whether they are owned by statutory bodies, private institutions, families or individuals. The procedure for the collection of data for the study deserves special mention. The staffs deputed for this study was directed to visit all panchayatis, village offices and note down the names and location of all temples. Then the field-staff visited all such temples located in every nook and corner of the panchayati, some of which situated even in dense forests and in areas inaccessible by roads. During their visits they also made local enquiries on any possible omissions. The data so collected through these visits and enquiries helped to prepare a Directory of all temples open to public and collect data regarding the name, location, principal deity, antiquity, structural type of main sreekovil, time of worship and poojas, utsavam/festival besides details on ownership/management. The publication of the monograph Temples of Kerala is in fact independent of the field-study and mainly based on research by the author in the field on various aspects of temples like temple architecture, iconography, deities worshipped in Kerala, pooja systems, offerings, priesthood, temple administration etc. The original idea was to publish the field data, so collected, in a single volume titled Temple Directory having two sections (viz. Section I - Brief notes on important temples and Section II - List of temples falling in each village/ town in a taluk). But as this field data was voluminous and found to be difficult to handle by Data-Users it was decided to have District monographs consisting of three sections viz. Section 1: General Background; Section 2: Salient features of important temples and Section 3: Temple Directory. Thus it was proposed to have 14 District monographs; besides the monograph titled Temples of Kerala based on general aspects of temples.

The data made available through the field-study relating to Kottayam district are presented in Section 3 (Temple Directory) of this monograph. Further based on certain criteria all the temples having swayambhoo (self-revealed) idols and other, important temples based on antiquity, number of prakaras, architectural excellence, number of poojas and number of worshippers were selected for detailed study. The data thus collected through a separate detailed schedule on all temples, which satisfy the above criteria, are presented in Section 2 (Salient features of important temples) of this monograph. This does not mean that other temples are unimportant. But the procedure adopted was to give more importance to temples based on the criteria. Section 1 (General Background) gives an overall review on temples of the district and analysis (based on the field data given in Sections 3 of this monograph) with a backdrop on geographical-setting, historical and other aspects of the district.

In this context, it is apt to mention the limitations of the data. The informants, mainly temple authorities, were generally co-operative. However, some of them were reluctant to provide details fearing that their private temples might be taken over by the Government and they took the stand that those temples were exclusively used by family members and not open to public. On the other hand some insisted on having their temples enumerated hoping to get some financial assistance for their family temples at a later stage. Another difficulty encountered by the field staff was that very often they had to go to the same temple several times to collect details as the temples were kept open only for specified hours (either morning or noon or evening) or on specified days beside non-availability of reliable informants. Similarly it was difficult to verify the claim of informants on the data of antiquity and myths associated with those temples. In spite of these limitations every effort was made to collect detailed data as one could. The field-study of Kottayam district was done at different periods during 1995-98 and, therefore, subsequent changes on structures, idols etc. have not been incorporated in this monograph except in few cases where revisits were done while writing the monograph. The data thus collected through the field-study and published in this monograph gives an epitome of temples of Kottayam district during the close of the twentieth century.

The field-study was initially monitored by Sree K. Sivaramakrishna Iyer (former Assistant Director of Census Operations). The field staff of the survey of this district included Sarvasree R. Chandrachoodan, M. Chandrasekharan, M.R. Sukumaran Nair, Thampi N. Suresh and G. Sivadasan of the Census Directorate. The wholehearted dedication of the field staff, in spite of several odd of travel through difficult terrain on foot withstanding the onslaughts of climate, is highly commendable. At the time of writing this volume I had to again utilize the services of Sree G. Sivadasan, former Statistical Investigator of the Census Directorate. I take this opportunity to record my great appreciation and thanks for his sincere help and contribution.

I will be failing in my duty if I do no not express my sincere thanks to Sree N. Venu Nair, Senior Draftsman, for meticulously preparing maps included in this monograph. The photographs on temples of the district were taken by Sree R.R. Jayaram (Raja Bhavan, Vaikam) of Photo Plus. M.G. Road, Ernakulam, Kochi 682035 and I am very happy to place on record my appreciation for his strenuous work of taking photographs of temples spread over the length and breadth of the district.

The keying of data, layout of pages, cover and photographic plates and the preparation of final computer discs for printing of this monograph were conscientiously done by Sree G.S. Sudheer Kumar as a love for labour. I am deeply impressed by his stupendous and dedicated work and for me he is always a source of strength in the preparation of monographs. I place here on record my great appreciation and profound thanks to him.

The writing of all monographs was taken up by me after retirement. The field-data and many published and unpublished reports had to be utilized in writing this monograph. My wife, Prof. Alappan Agandam, gladly and conscientiously undertook the brunt of the work of reading the proof and gave me valuable suggestions. I have no words to thank her.

I am ever grateful to all authorities of temples and the informants, who willingly furnished data to the field staff and to me.

It is my pleasant duty to acknowledge the co-operation extended to me by officers and staff of the Census Directorate. I got full encouragement at the initial stages of this project from late Srrr .M. Samuel, I.A.S. Director of Census Operations, Kerala, and immeasurable help from subsequent Directors Mrs. Sheela Thomas, LAS and Dr. V.M. Gopala Menon I.A.S. I place on record my grateful thanks to all of them. I will be failing in my duty if I do not wholeheartly thank SIee . Ravichandran, Joint Director and his colleagues who gave full co-operation to me at all times.

It is also my pleasant duty to thank the officers and staff of the office of the Registrar General, India for their great help in bringing out this monograph.

It is my great privilege to acknowledge my great obligations to Dr. M. Vijayanunni I.A.S., Shri Jayant Kumar Banthia I.A.S. and Shri Devender Kumar Sikri I.A.S. former Registrar General, India who were very generous, extremely considerate and greatly helpful in solving problem on printing and publishing of these monographs.

Now it is my pleasant duty to acknowledge my deep gratitude to Dr. C. Chandramouli I.A.S., the Registrar General and Census Commissioner, India for the invaluable guidance and encouragement given to me and also for writing a befitting Foreword to this monograph.

While writing this monograph I have experienced the Divine Grace of the Almighty and boundless blessings of Gurus and I have no words to express my deep feelings. I humbly pray for their continued benediction.

The views expressed in this monograph are my own and do not necessarily represent the views of the Government of India.

I am sure that this monograph will indeed be useful for posterity and I am happy to dedicate this monograph as a background document on the subject for the use of administrators, devotees and the general public. 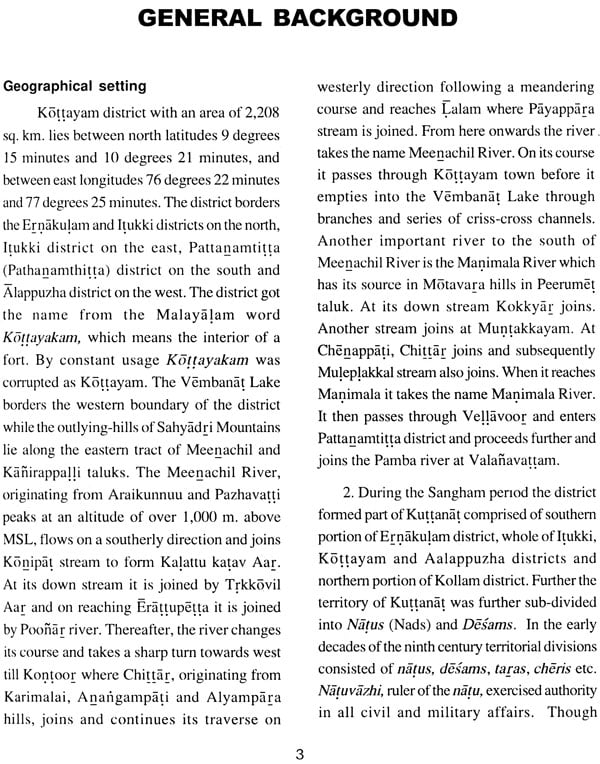 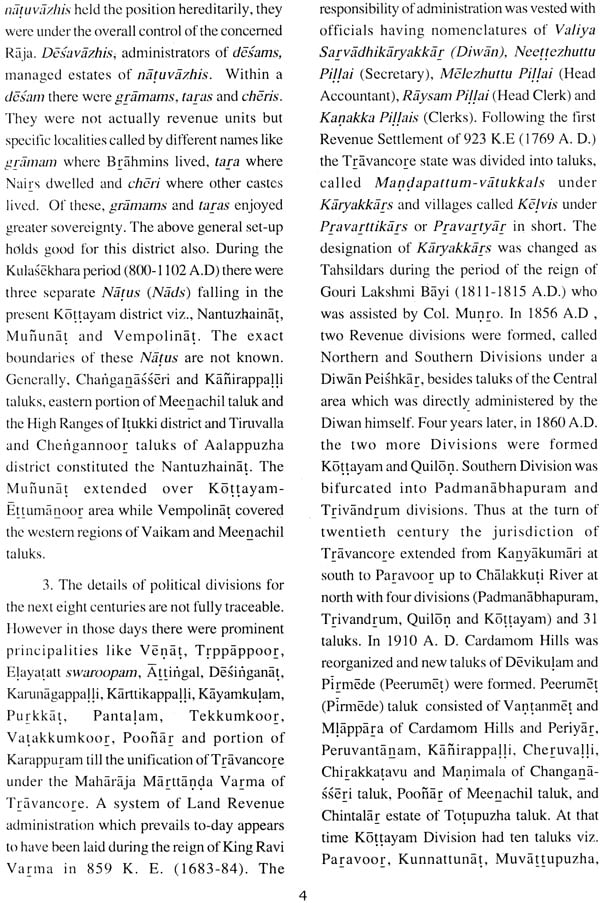 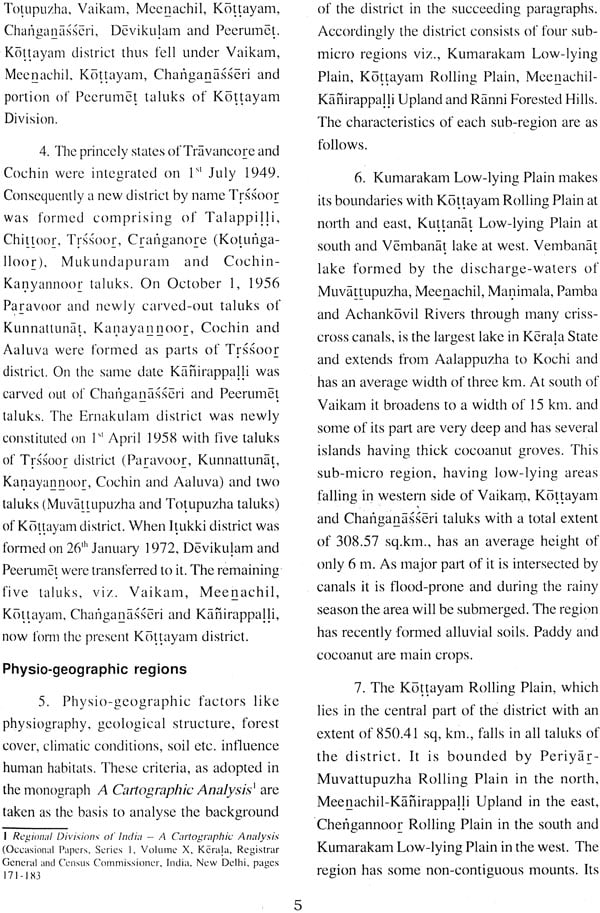 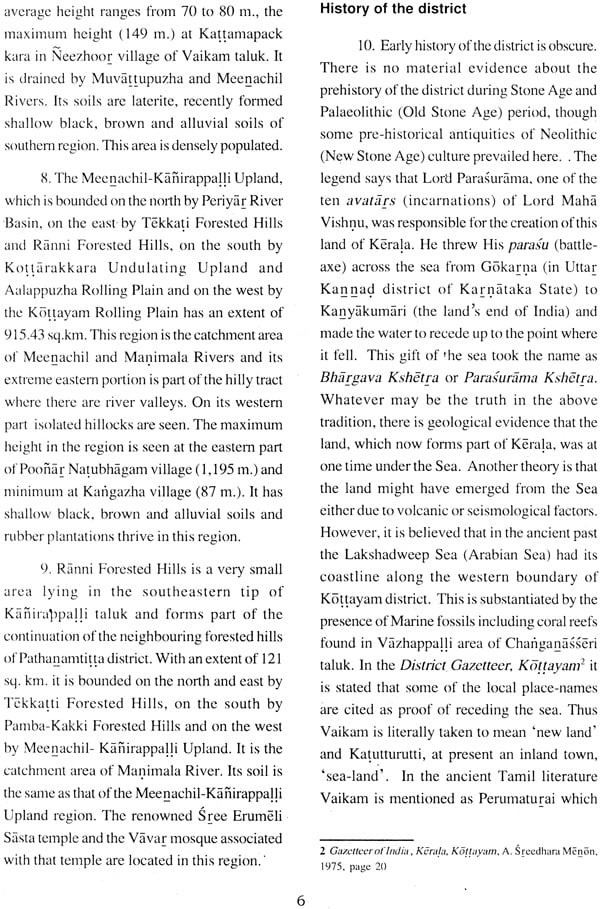 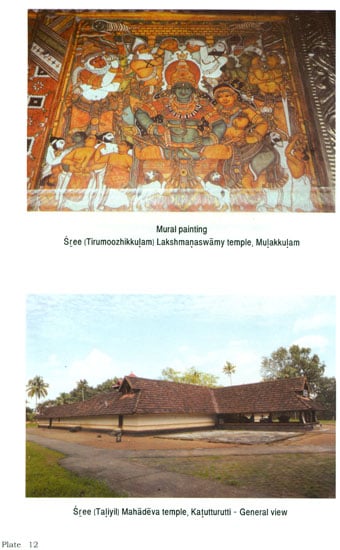 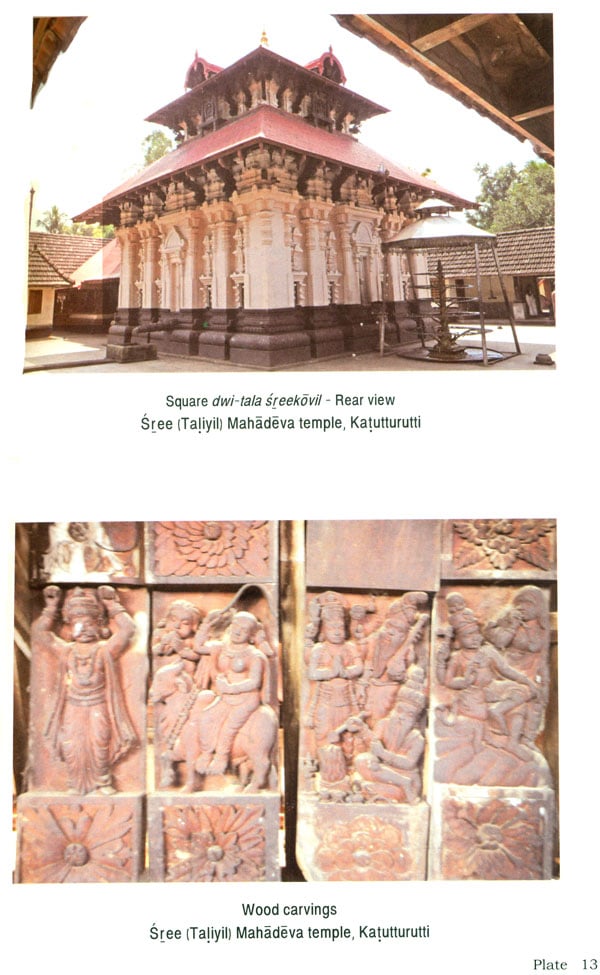 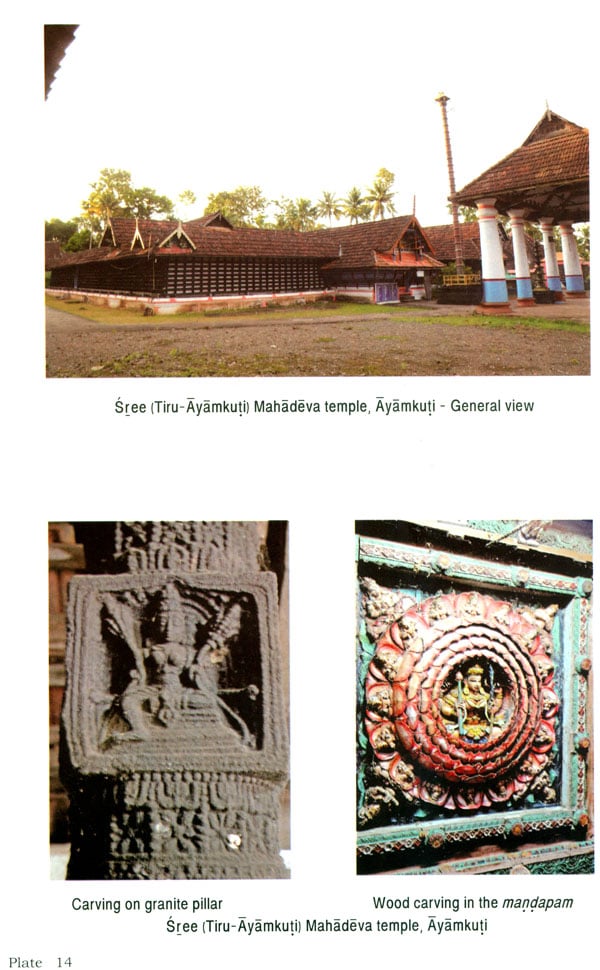 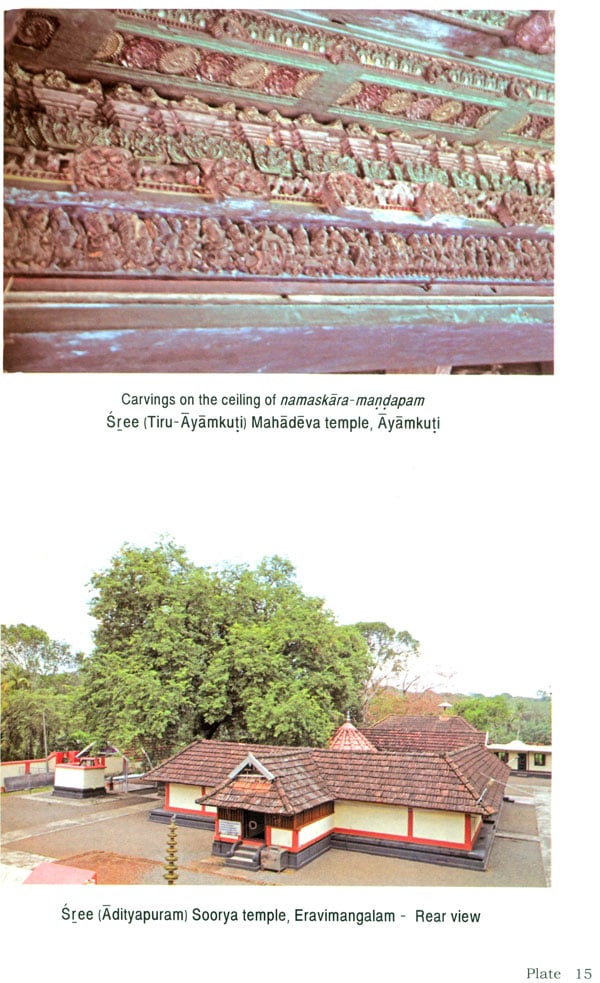 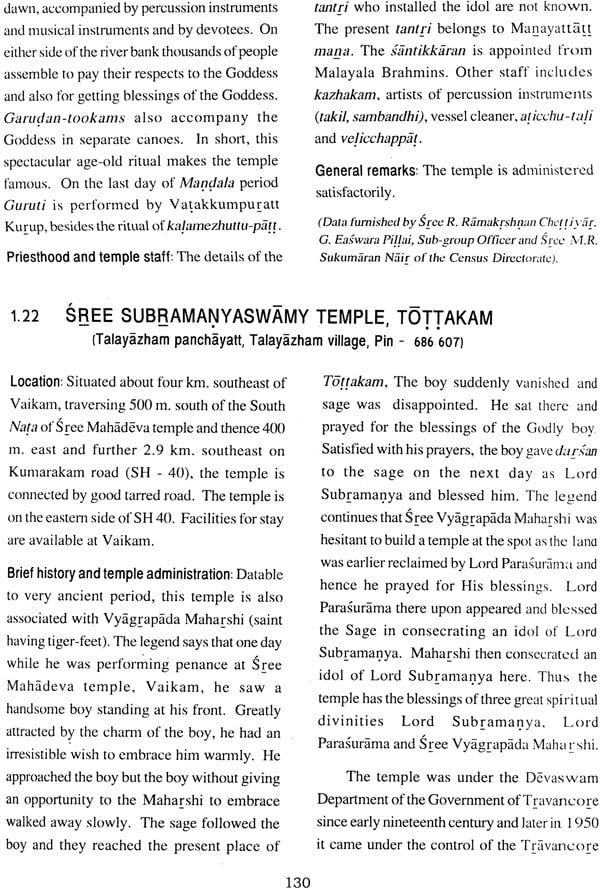 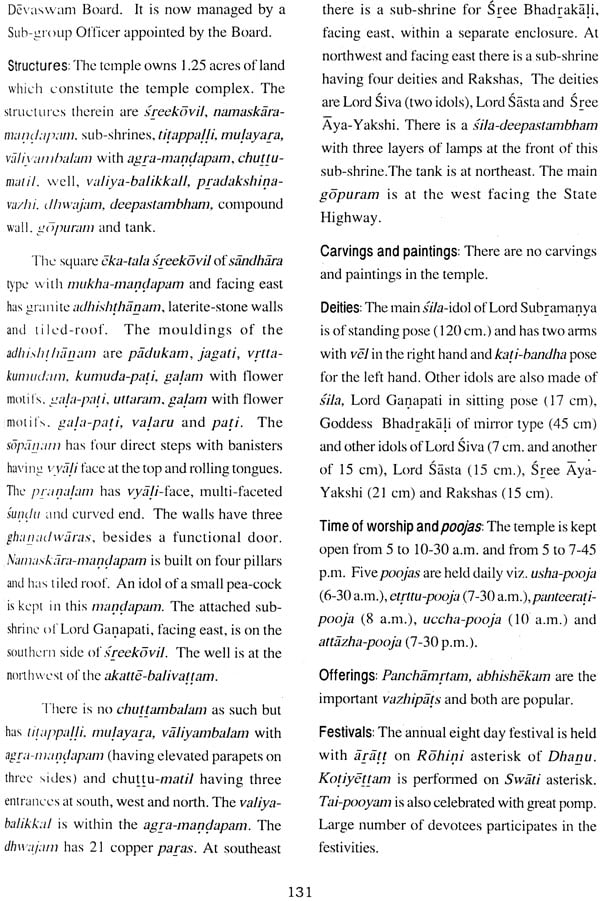 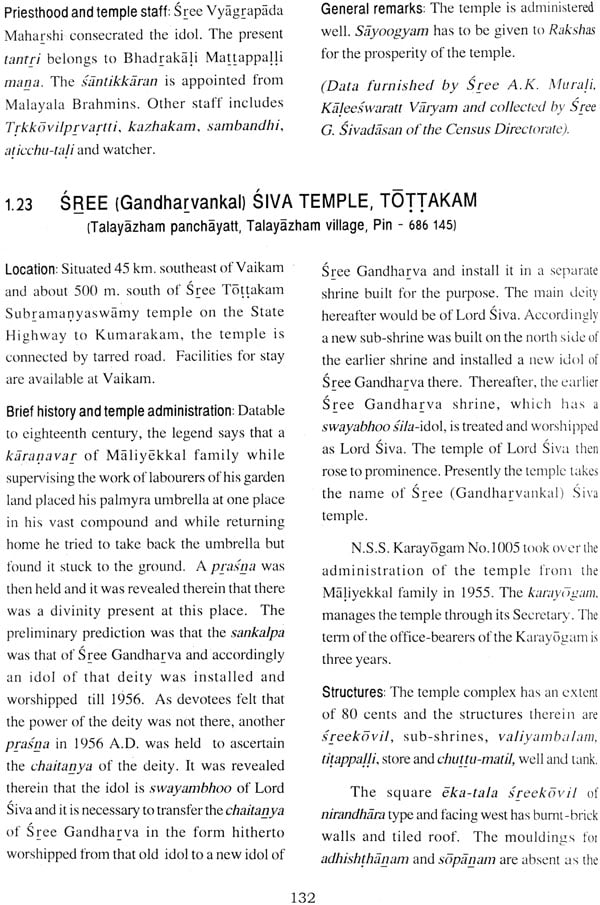 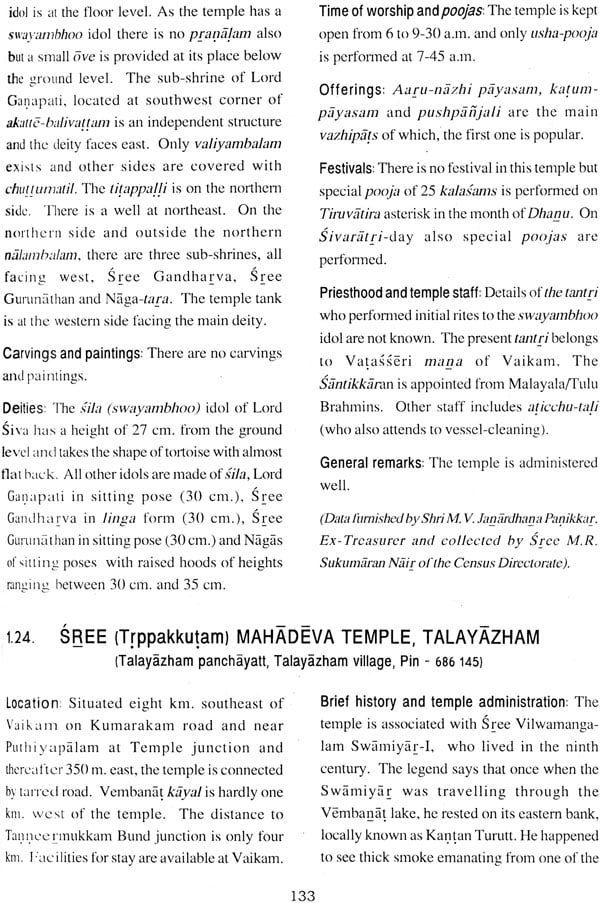 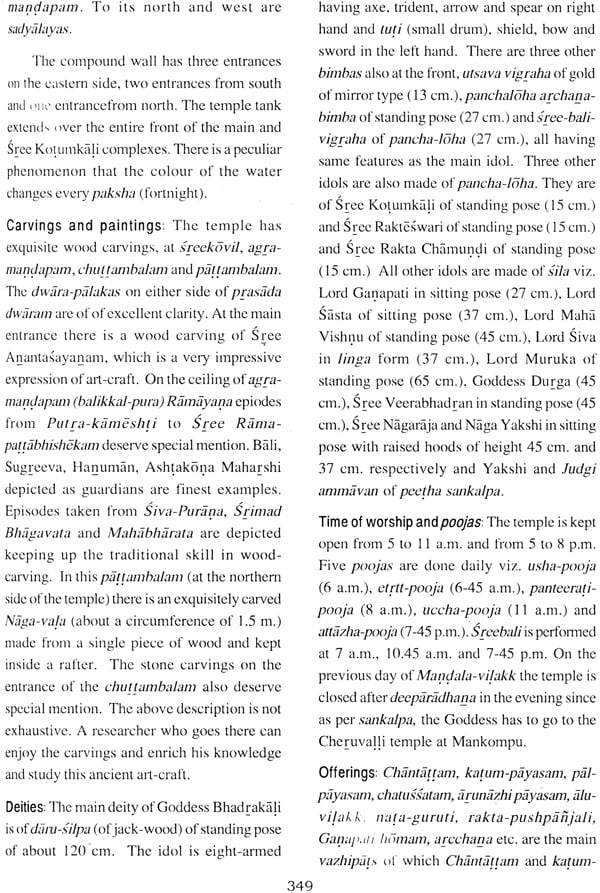 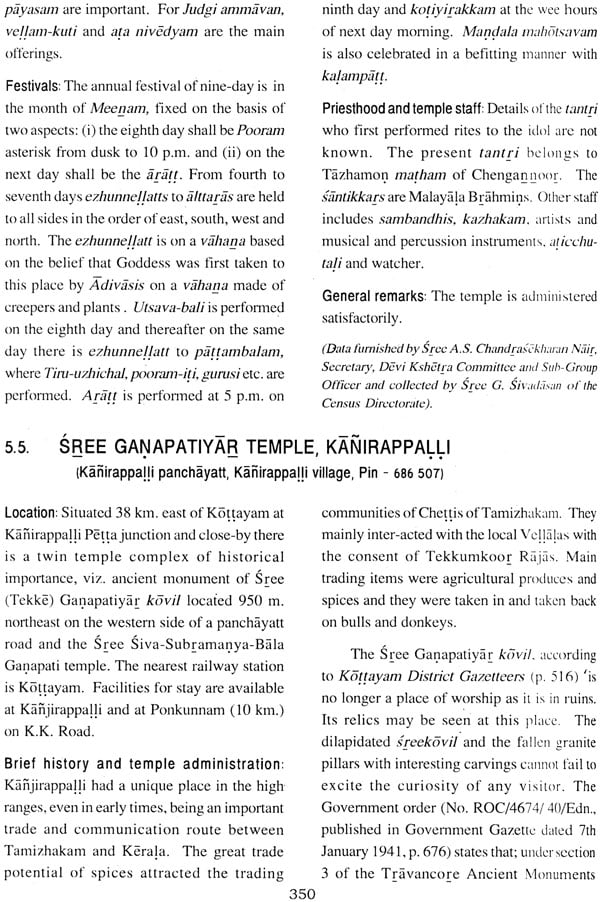 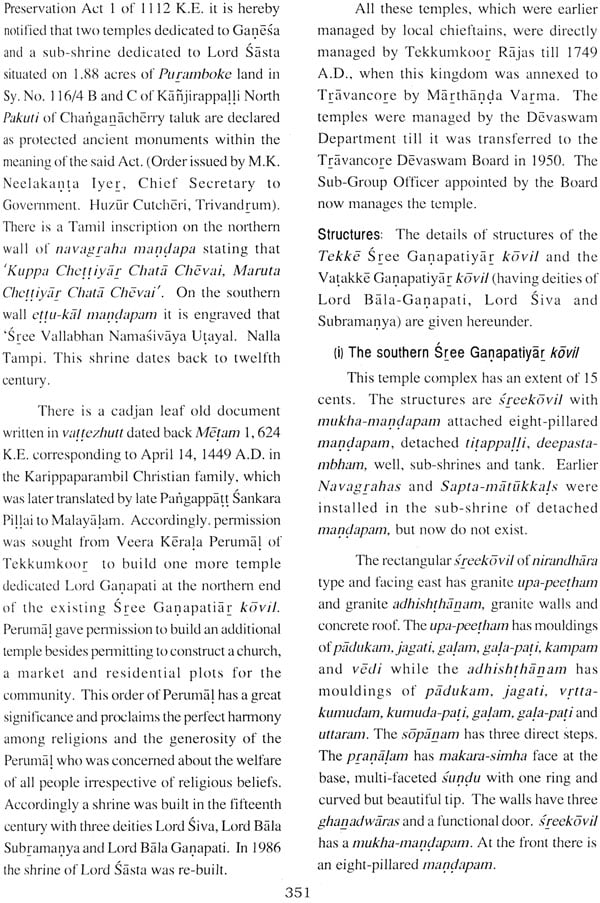 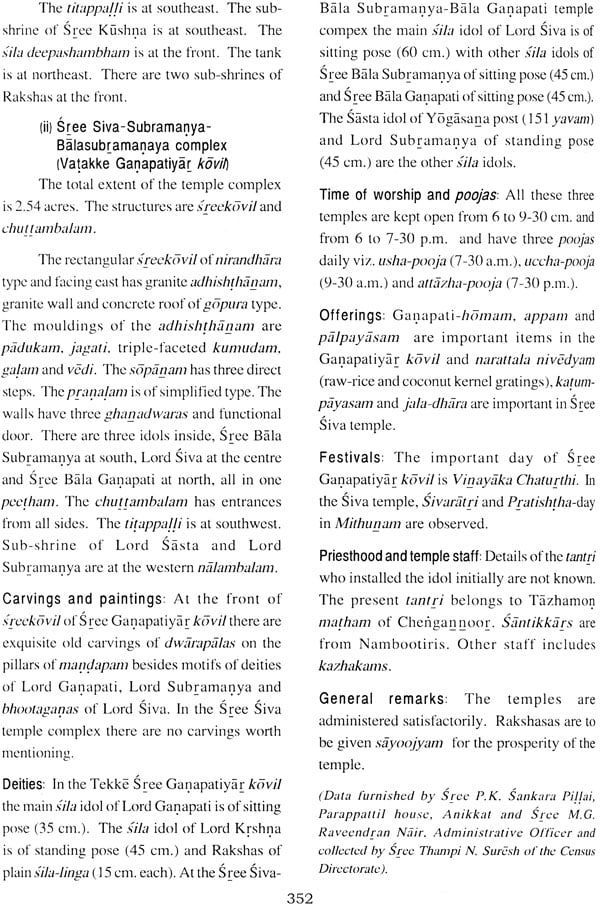 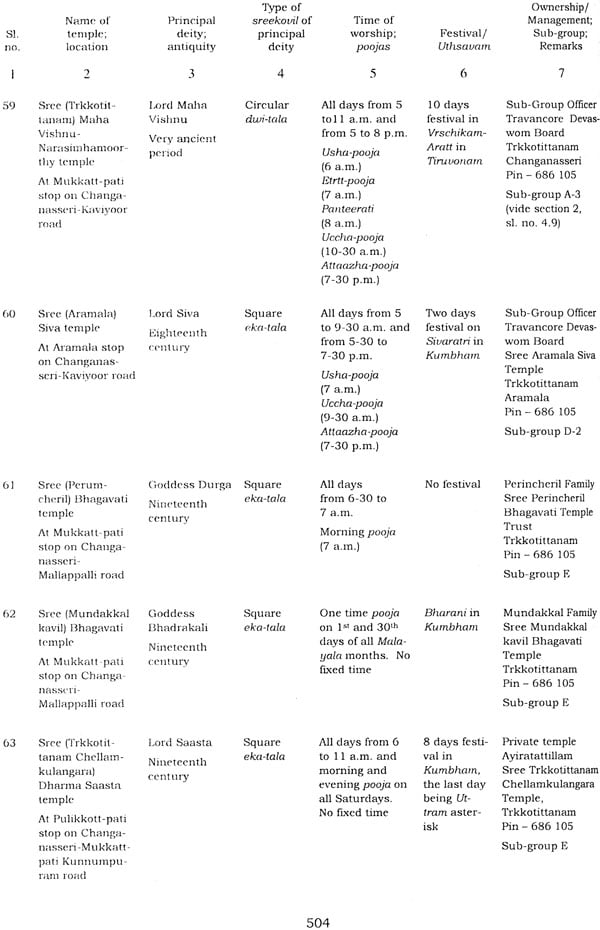 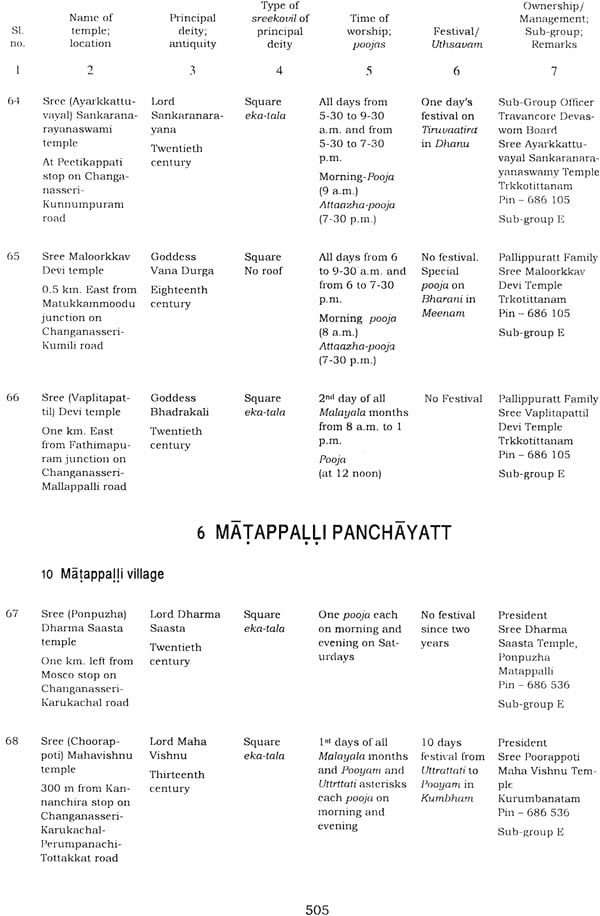 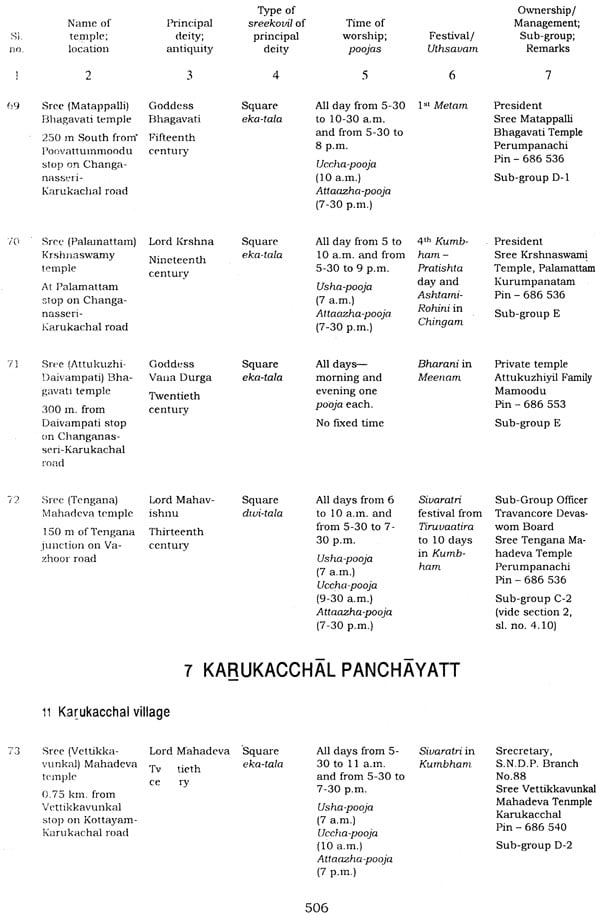 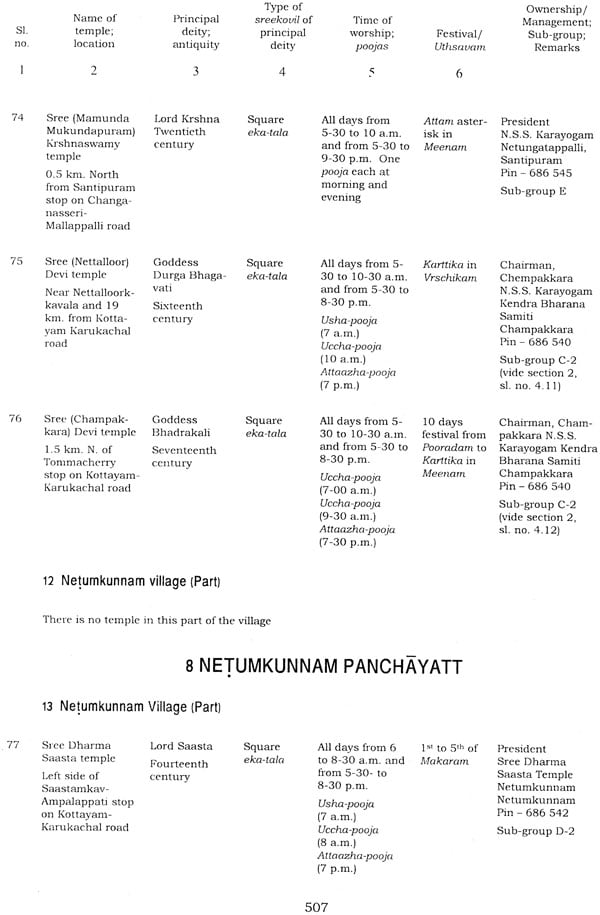 Temples and Legends of Kerala
By K.R. Vaidyanathan
$31
FREE Delivery

Theerthayathra (A Pilgrimage Through Various Temples)
By K. Srikumaran
$39
Sold Out

Painted Abode of Gods Mural Traditions of Kerala
By A. Ramachandran
$163
FREE Delivery 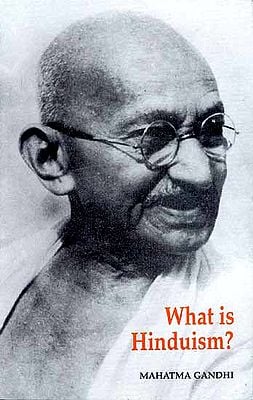