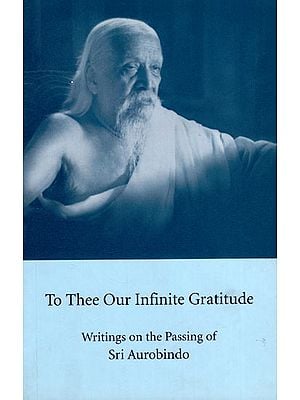 $25.00
Notify me when this item is available
Save to Wishlist Send as E-card Share by Email
About the Book

Sri Aurobindo’s passing on 5 December 1950 is indelibly etched in the memories of those who were present in Pondicherry at the time, and is movingly commemorated in the Mother’s message of 9 December that is now inscribed, in French and in English, on two sides of the Samadhi. On behalf of the disciples and devotees who called Sri Aurobindo their Guru, and on behalf of the earth and all mankind, she began the message with the words, "To Thee who hast been the material envelope of our Master, to Thee our infinite gratitude."

To Thee Our Infinite Gratitude begins with the Mother's words on the passing of Sri Aurobindo. The reminiscences, essays, letters, and extracts from books that follow are for the most part personal reflections by those who witnessed the days before Sri Aurobindo’s passing or who had his final darshan before his body was placed in the Samadhi. Filled with the emotion and gravity of those hours and days, the accounts convey the overwhelming sense of Sri Aurobindo’s continued presence and spiritual action, and attempt some understanding of the inner significance of his final withdrawal.

The unremitting endeavour of man to expunge death from his destiny made startling progress in the twentieth century so far as physical science is concerned. To cite an example that unerringly testifies to this statement, a noted medical researcher and author, Alvin Silverstein, dedicated his signifi- cant thesis Conquest of Death (New York: Macmillan, 1979) "To our generation — the first Emortals" and said in con- clusion, "The 1980s will be the Decade of the Scientific Pay- offs. The impressive decline in the incidence and mortality of heart disease that has already begun to gather momentum will accelerate. Cancer deaths will dip and then plunge. Dra- matic progress in aging will bring new youth for the millions. The close of the decade will bring a virtual end to disease and a welcome reduction of pain and suffering... The heart disease rate has been falling annually since the early fifties. The cancer death rate may have already turned down and will continue to do so at an accelerated pace in the years ahead. During the next decade, further advances will bring a striking improvement of the odds. If you survive the next ten years, you may live on indefinitely in youth and vigour you may become emortal." In other words, if not immortal, at least not obliged to die.

No more than a year or so had passed when this pleasant forecast was shattered by the appearance on the horizon of that deadly cloud soon to spread and darken the entire global sky — AIDS.

And that brings to mind what Sri Aurobindo wrote in a footnote to the chapter entitled "Rebirth and Other Worlds" in The Life Divine as if in anticipation of such a develop- ment:

Even if Science — physical Science or occult Science were to discover the necessary conditions or means for an indefinite survival of the body, still, if the body could not adapt itself so as to become a fit instrument of ex- pression for the inner growth, the soul would find some way to abandon it and pass on to a new incarnation. The material or physical causes of death are not its sole or its true cause; its true inmost reason is the spiritual necessity for the evolution of a new being.

Though just a footnote, it contains an essential truth: it is the spiritual necessity for the evolution of a new being that warrants death. We can interpret this profound statement according to the meagre light we have been able to absorb from the vision the Master has unfolded before us. The situation is marked by a paradox: there is no possibility of an indefinite physical survival unless the body has become an instrument fit enough to contain a spirit that aspires to grow. On the other hand, the body cannot become worthy of that process without the intervention of some new transforming consciousness. We the students of Sri Aurobindo-lore know that the Master was engrossed in a hitherto unexplored possibility and devoted his mighty yogic power to resolve the paradox and bring down and establish that transforming power in the physical. Any claim to understand that divine process the Master and the Mother followed and the success they obtained may be presumptuous on our part. But the unique documents compiled in this slim volume will lead any reader with a genuine seeking to the verge of that Mystery. While the Mother’s observations on the Master’s passing away enlighten us about the crucial moment that had arrived in their Yoga, requiring either of them to sacrifice the human body they had put on, her superbly poetic and precise com- position meant to be engraved on the Samadhi should cast a mantric spell on a sensitive mind.

Nirodbaran’s reminiscence of the last few days of the Ava- tar isa document one of its kind, a disarmingly frank account of the predicament of matter — matter as the human body with all its limitations as well as with its privilege to accom- modate and adjust to the demand of a mighty consciousness. This writer has never come across any other example of an epic grandeur encompassed in such a short piece of prose. We of course realise that its powerful charm emanates from the unconditional love and adoration the physician-turned- poet-turned-the Master’s servitor and scribe had spontaneously infused into his words.

How thin was the screen that separated the Mother’s normal activities and her power to perform a miracle is the realisation that stuns us in Dr. Prabhat Sanyal’s reminis- cence. At the same time, we realise the difference between the miracle the Mother graced this disciple with and miracles as they are popularly understood. Her miracle was, for her, nothing different from a smile or a word of compassion, helping us to see a point that is so obvious to her but inor- dinately unfathomable to us. The doctor’s loving audacity in asking the Mother, "Where is the light you speak of — can I not see it?" yielded for us an invaluable gem to treasure.

While the essays of Amal Kiran, Udar and K. R. S. Iyengar give us a vast spiritual, psychological and factual perspective of the event, greatly helping us to understand several aspects of the Yoga of Sri Aurobindo, the young American scholar Rhoda P. Le Cocq’s account of the last Darshan of the Master and the Mother unveils that aspect of the power of Grace which so smoothly and silently demolishes the wall of scepti- cism one had maintained around oneself for long.

The compilation brings us a serene calm and an intense feeling of gratitude, and reminds us that: Death is a stair, a door, a stumbling stride

The soul must take to cross from birth to birth,

A grey defeat pregnant with victory,

A whip to lash us towards our deathless state. 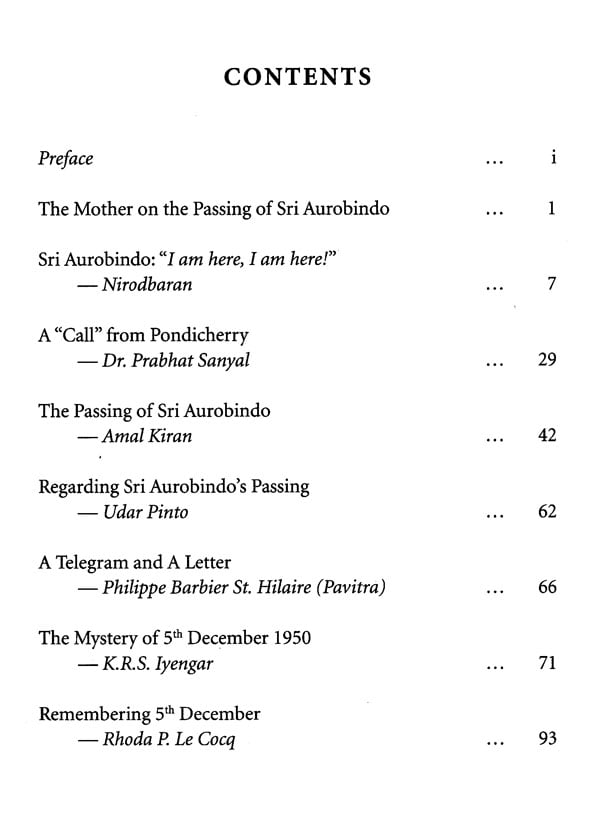 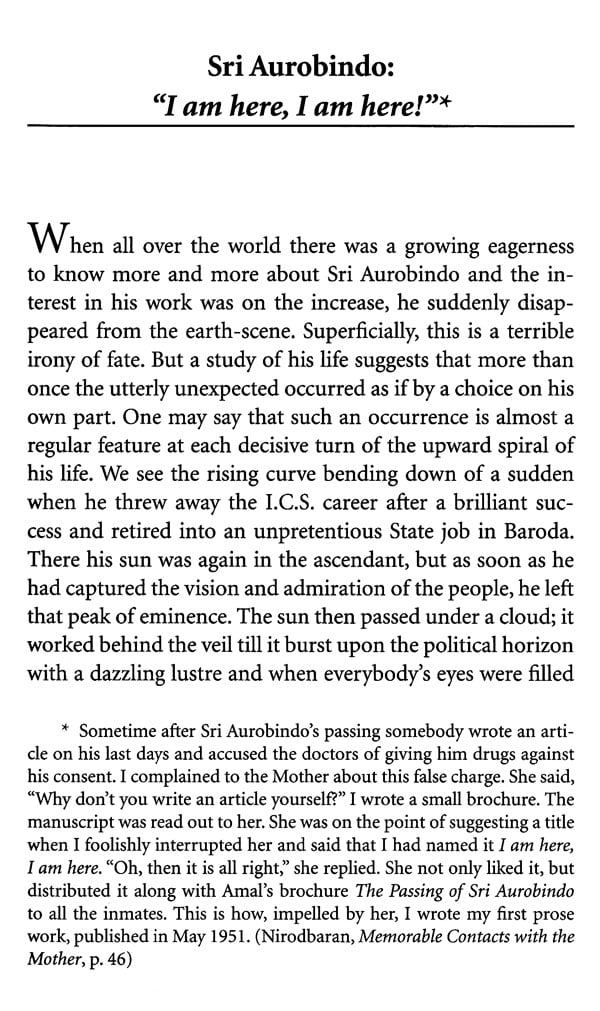 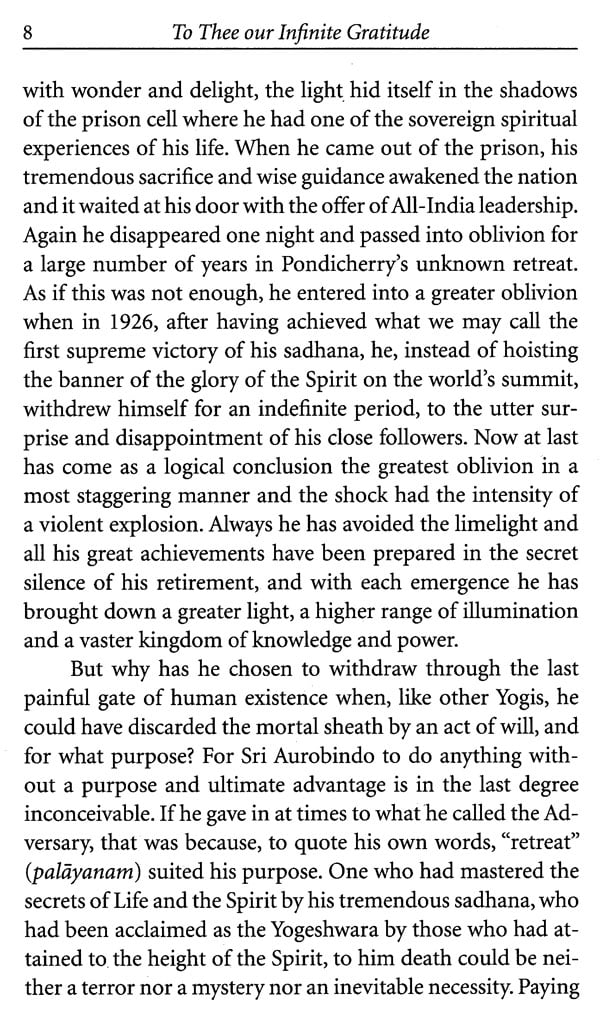 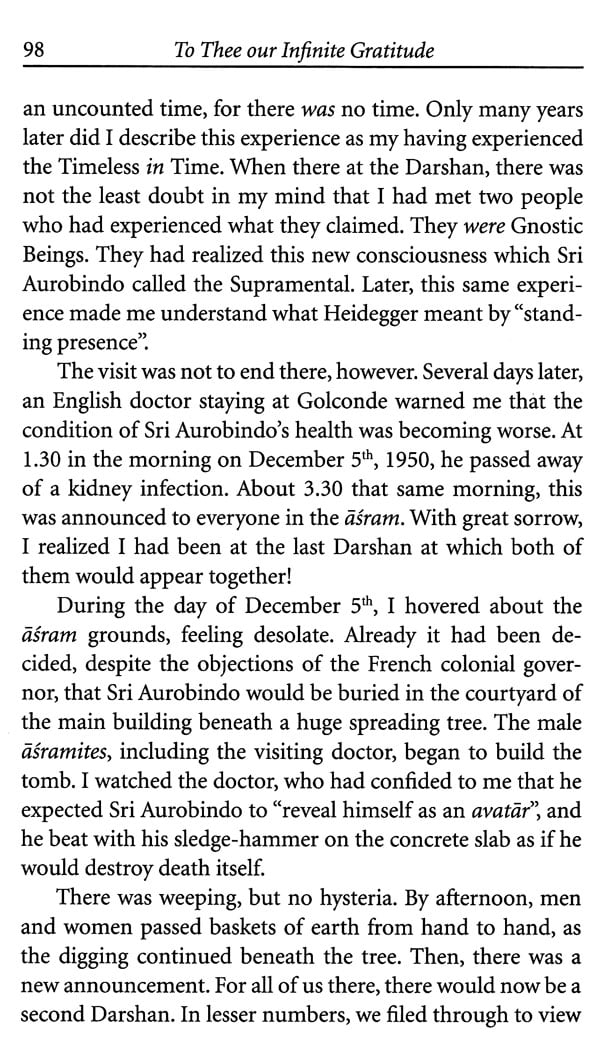 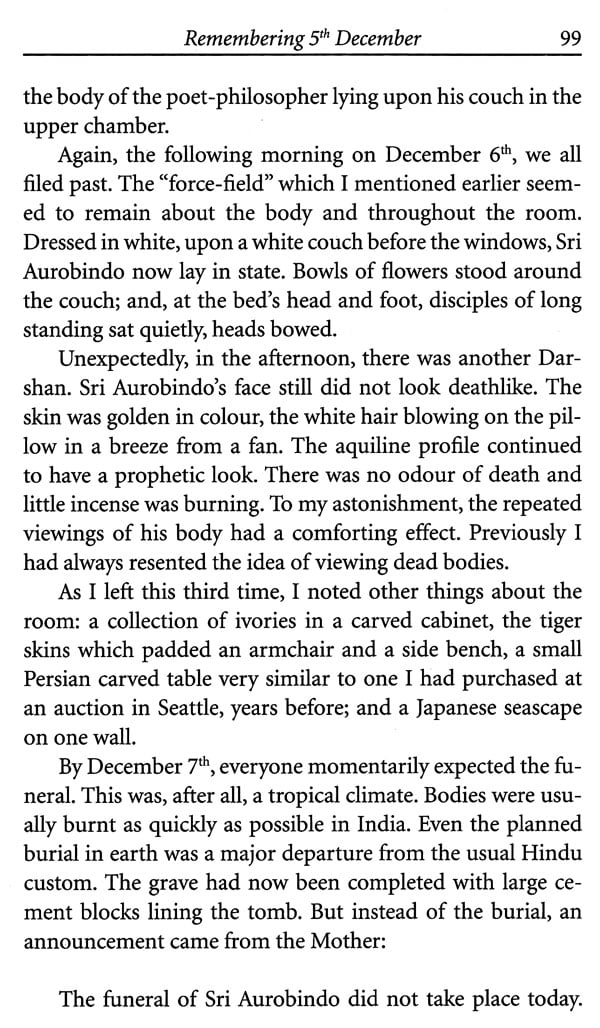 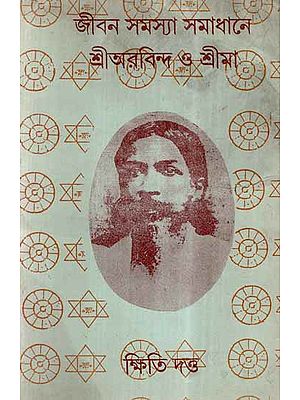 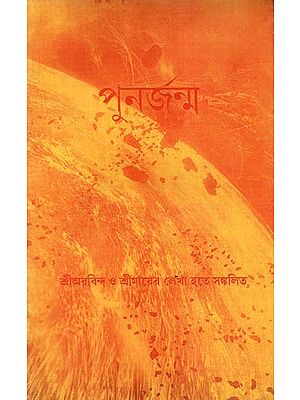 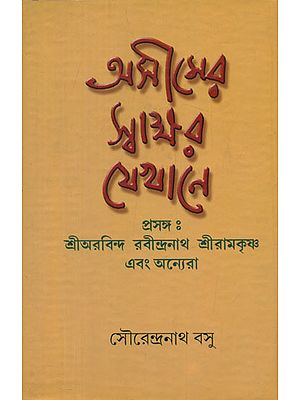 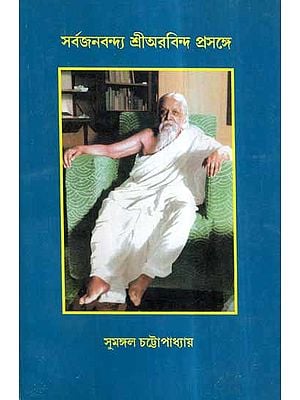 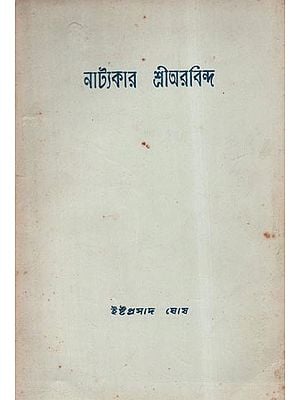 Shri Aurobindo- A Dramatist (An Old and Rare Book in Bengali)
By Ishta Prasad Ghosh
$20.00 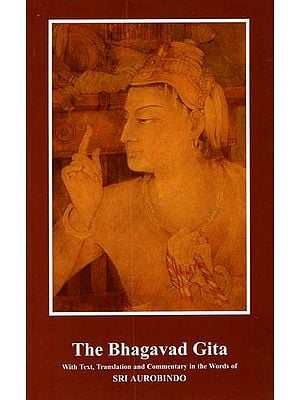 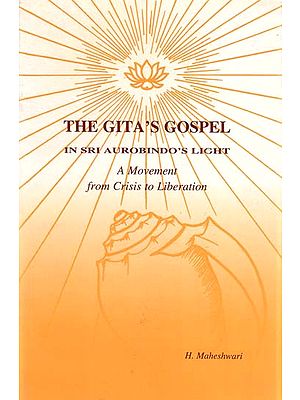 The Gita's Gospel - In Sri Aurobindo's Light (A Movement from Crisis to Liberation)
By H. Maheshwari
$25.00 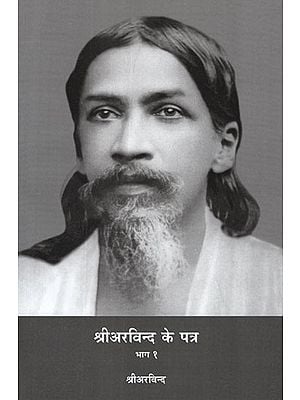 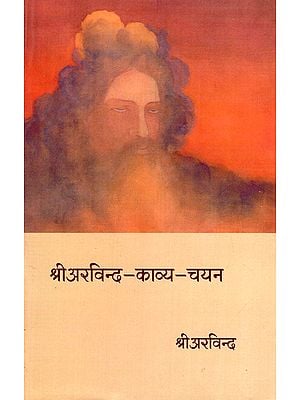 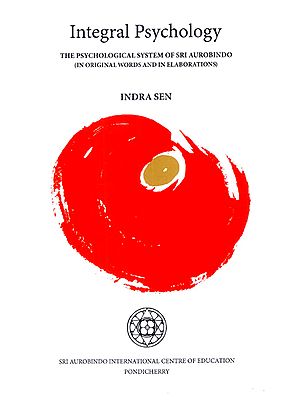 Integral Pyschology : The Psychological System of Sri Aurobindo (In Original Words and in Elaborations)
By Indra Sen
$50.00 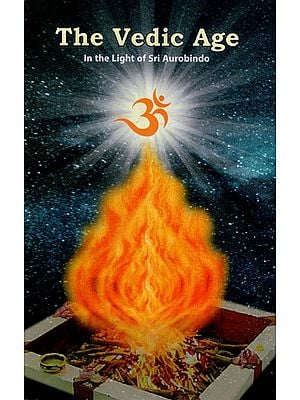 The Vedic Age : In the Light of Sri Aurobindo
By Chandra Prakash Khetan
$38.00 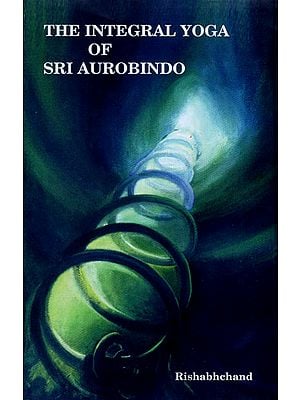 The Integral Yoga of Sri Aurobindo
By Rishabh Chand
$30.00 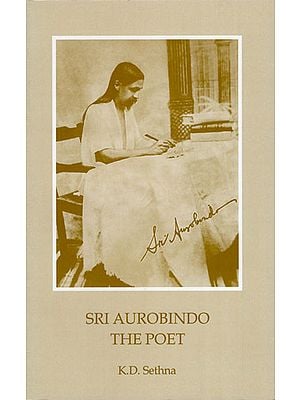