$16.00
Quantity
Ships in 1-3 days
Notify me when this item is available
Post a Query

This is the tale of an Iranian Muslim lady saint named Tuhfa who sacrificed her life to the love of God. Although she was a poor slave girl misunderstood by the people as a nomic, in fact she was intoxicated with the love of God. In the Introduction, the learned author has compared the tenets of divine love giving example from all the religions including Hinduism, Buddhism and Christian mystism.

Hazrat Siri Siqti, the preceptor of Hazrat Junaid was inspired in his prayers to Search out the lover of God. He found a lady imprisoned in the mental hospital in chains and fetters. Having talked with her, he tried to get her released from the mental hospital. The lady’ master who had purchased her for 20,000 dinars told Hazrat Siqti that he was attracted to her by her beauty and divine effulgence surrounding her. She neither ate nor drank but passed all her time in the remembrance of God and His love. All the night, Hazrat Siqti prayed to God to enable him to purchase her. In the morning a rich man was inspired by God to help Hazrat Siqti with the price for purchasing the lady. Thus, having pleased her the master and the richman turned Dervishes. Hazrat Siqti found her in kaba as a lean and emaciated figure due to austerities. She was accepted by the Lord as His own lover. Thus, having changed the life of three persons, Tuhfa attained the abode of the Lord. But her life story narrated by the realised saint Dr. Behari will change the life of many seekers who will go through this inspiring tale of the divine lover.

Dr. Bankey Behari was a scholar of Persian, Urdu and English. In addition to other scholary books he translated many books on Sufism like lran ke Sufi kavi in Hindi, Revival of Sciences by Alghazali in English, Tadkaratula Aulia (i.e., Memoirs of Saints) by Faridudin Attar in English, Fiha Ma Fiha (Table Talk of Maulana Rumi), The immortal Sufi Triumvirate-Sanai, Attar and Rumi, Tuhfa-The Minstrel Divine, Sufis, Mystics and Yogis of India and The Rubaiyat of Samad, all in English.

He was awarded the UNESCO Prize on his Paper “Way to Ecstasy” and it was considered as the best India work for the year 1973.

He renounced his lucrative legal practice and having taken Sannyasa came to Vrindaban in 1940. He adopted the intense spiritual practice and realised God and departed to Goloka Dhama, the Divine abode of the Lord on 7 February 1975 after living in Vrindaban for 35 year.

Dr. Chhaganlal Lala was awarded the Ph.D. degree in 1972 and D. Litt. degree from the Agra University. He served as a Lecturer of English in Sri Nimbark Sanskrit Mahavidyalaya, Vrindaban. He was closely associated with Dr. Bankey Behari and has taken the noble work of editing all the Unpublished works of Dr. Bankey Behari. Besides being involved in the study of Scriptures, he is a prolific writer and has published articles in several journals.

Iranian Mysticism can lay claim to many ladies who attained to very great spiritual height and many were ranked with the Sufis whose names embellish the walls of the Temple of mysticism for all times. Amongst these ladies are Rabia Basri, Muaza Uduyia, Majda Querisha, Sayida Ayesha, Umrahrabah UI Qaisi, Fatima Naishapuri, Rabia Binnat, Ismail Am Harun Umra, Amra Nabib, Amra Nabib, Ammat UI Jali, Afira, Shaiwana, Amna Namalia, Manfusa and Sayida and Nafisa to name a few. Very hard were the austerities they practised. Muaza passed the whole night in prayers and day in fast. To remember death, Rabia Uduyia kept her coffin before her all the time. Umrat Rabah passed her whole night standing in worship. Dhul Nun Misra called Fatima Naishapuri his Guru. Shaiwana passed her time shedding bloody tears. Rabia of Basri has been mentioned with fervour by Attar in Basri has been mentioned with fervour by Attar in his Tadkarat. But unique is the case of little known TUHFA (lit. Offering to lotus feet of the Lord). In his Mafhat-UI Ans the Persian biography of Sufis of Iran by Jami, she is noticed as also in Al Mahasin and Al Ishq and other biographies of Iran. She was a contemporary of Hazrat Siri Saqti, the reputed preceptor of Hazrat Junaid who flourished in the ninth century. Although she was a slave girl, she was reputed for her beauty. She was a reputed songstress and her poems in Arabic quoted by Jami thrill the heart with their living agony. To read or hear them makessighs sigh, madness mad and tears vie with one another by incessant flow; such is the cadence, the melody and above all the divine fervour of love in them. She reveals to the sojourner in the Path of Divine love the mystery of the spiritual itinerary, its vagary and teaches the Way back Home. We place an English translation of the work. I thank the lady saint of Vrindaban Mata Krishnaji in helping me in the production of this work. 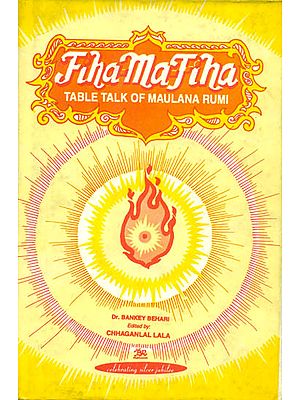