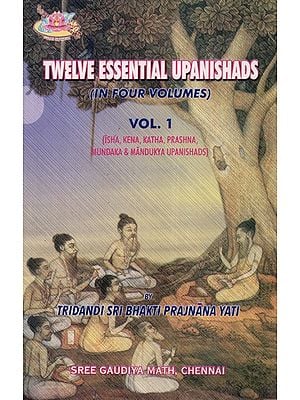 FREE Delivery
$24
Quantity
Ships in 1-3 days
Notify me when this item is available
Preface
After the Kurukshetra-battle when Sri Yudhishtira alongwith his brothers and Sri Krishna went to Sri Bhishma to get his guidance and advice, Sri Bhishma said:' "I deem that all your miseries are Providential. How strange that danger befall even where king Yudhishtira, the son of Dharma is the ruler; where are present Bhima, armed with the mace and Arjuna holding the invincible Gandiva and above all where the Supreme Lord Sri Krishna Himself is the Friend and Well-wisher! None, indeed, can know the purpose of the Mission of Sri Krishna for which He takes His devotees as instruments; even great seers get bewildered in their seeking to find it out". So, for a self-surrendered aspirant, it is certain, that all that happens is wrought by Providence.

My Divine Master Nityaleelapravishta Sri Srimad Bhakti Vilasa. Tirtha Goswami Maharaj, was the dearest disciple (Guru-preshtha) of Om Vishnupad Sri Srimad Bhakti Siddhanta Saraswati Goswami Maharaj, the illustrious Founder of Sri Chaitanya Math and its branches Sri Gaudiya Maths. They both are eternally related in relation to their servitorship in that plane of transcendence as Vimalamanjari and Nayanamanimanjari respectively in their roles of service to the Two Moiety-Counter-Wholes Sri Radha Krishna. I am the most unworthy disciple of my Guru Maharaj, but his grace and affection towards me was abounding. I could not realise earlier why he used to say often, 'burri always in labyrinth of fire of sufferings which brings the clue for perennial happiness'. But after his demise which took place in September 1976 when as it is usual in such cases viz.

Thereupon under the benediction of my Divine Master, this most humble self started the work during the Urija Vrata corresponding to Oct. - Nov.'77.

As per the chronological order that I recorded in the very beginning of my work that `Isha' is the first and 'Brihadkanyaka' is the last among the eleven essential Upanishads and accordingly therefore, I followed my order of translating in that chronological way starting from 'Isha' and ending with 'Brihadkanyaka' Upanishad. I felt extremely delighted while I was translating Isha, Kena, Katha, Shvet6svatara, Mundaka, Itareya etc. and when I touched `Chh6ndogya' I felt much strain. As I was proceeding my brain was terribly affected even I had to go for some Ayurvedic treatment. But when I passed over the profane and reached to the Transcendent, particularly when I could have a vision of Sri Krishna's Esoteric Pastimes blossomed forth in it, it carried me to the greatest delight. Finally when I took up 'Brihadkanyaka' I was put in the midst of the ocean and I was almost puzzled and practically became half-mad, yet my tenacity didn't permit me to stop. Above all it was the God's Providence that I have to complete the work so; soon here too I could have a wonderful flash of Divine light within which (Jyotirabhyantare rupam atulam Shyimasundaram) the merrily dancing Honey-moon Sports of Rasaraja with Mahabh6va, the Two Moiety-Wholes Sri RadE6 and Sri Krishna I could notice. Particularly the most synonymous mantras such as Chh. Up. I. 6. a-7; III. 17. 6-7; VII. 2a.2; and Brih. Up. II. 3.6; IV. 2. 2-3; and Tai. Up. II. 4-a and such many others - where I was puzzled to get synthetical reconciliation but finally I could be enlightened with their most esoteric meanings by the direct inspiration and guidance from my Divine Master which was the Supreme gain of my delight.

Introduction
The great Acharyas (Spiritual-pathfinders) of our Sanatana-Dharma didn't give their sermons from the mount merely as their oral utterances, but their utterances were based upon the concrete basis of Prasthanatraya which could not be shakened even by the all-destructive influence of Kali (Time), Yugas passed like Satya, Treta, Dvapara and Kali - Maha- Pralaya came but the Vedas complete with Prasthana Traya remained the same. But at times concealed themselves as the tree in its seeds, and again got its full-fledged shape having timely rains and fertility. That is why they are known as Apaurusheya-not the product of any intellectual brain subject to any edition and alteration or destruction-they are known as self-revealed Truth.

Him the Brahmanas seek to know by the study of the Vedas, by sacrifices, by offerings, by penance, by observing vow of fasting. On realising Him, in Reality one becomes an ascetic (converting all his senses in culturing unalloyed devotion to Him). Desiring Him only as their Resort, mendicants wander forth.

Verily, because they know this, the ancient sages desired not offspring, saying 'what shall we do with offspring, of this insignificant world, as we have attained the Supreme God-head'. They, verily having risen above the desire for sons, the desire for wealth and desire for enjoyment of different worlds (of mundane and celestial), lead the life of a mendicant.

This God-head is devoid of mundanity, so all mundanity is discarded from Him therefore it is stated `not this, not this'; for He is inconceivable as He is beyond sense-perception; He is indestructible, for, He cannot be destroyed; He is unentangled for He is not entwined with the world. He is unfettered, He does not suffer; He never suffers injury. He who has realised Him as such is never overtaken by the following two thoughts viz., - neither the thought, 'Hence I did sinful acts', nor the thought, 'Hence I did virtuous acts'. Verily he overcomes them both. What he has done and what he has not done, do not affect him'. My Divine Master says: "The theistic Sh5ndilya in his sharp contrast to the Pantheism of Yajnavalkya and his non-distinctive absolutism introduces a dualistic note admitting the separate and exclusive position of the Absolute. This dualistic note is highly pronounced in the Katha Upanishad, Mundaka, Chh5ndogya and Svetasvatara among the oldest Upanishads. 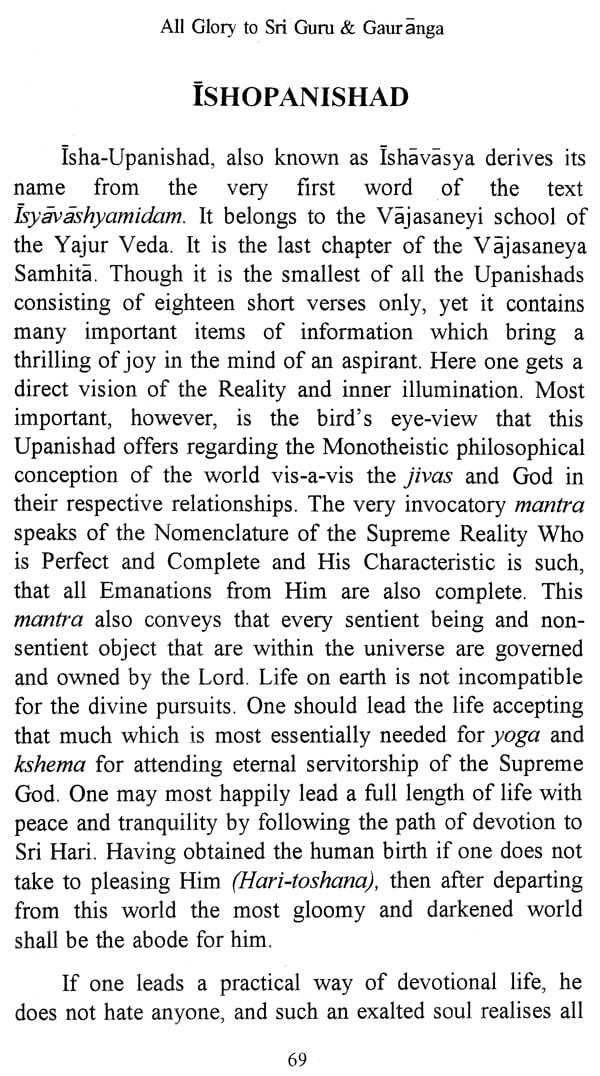 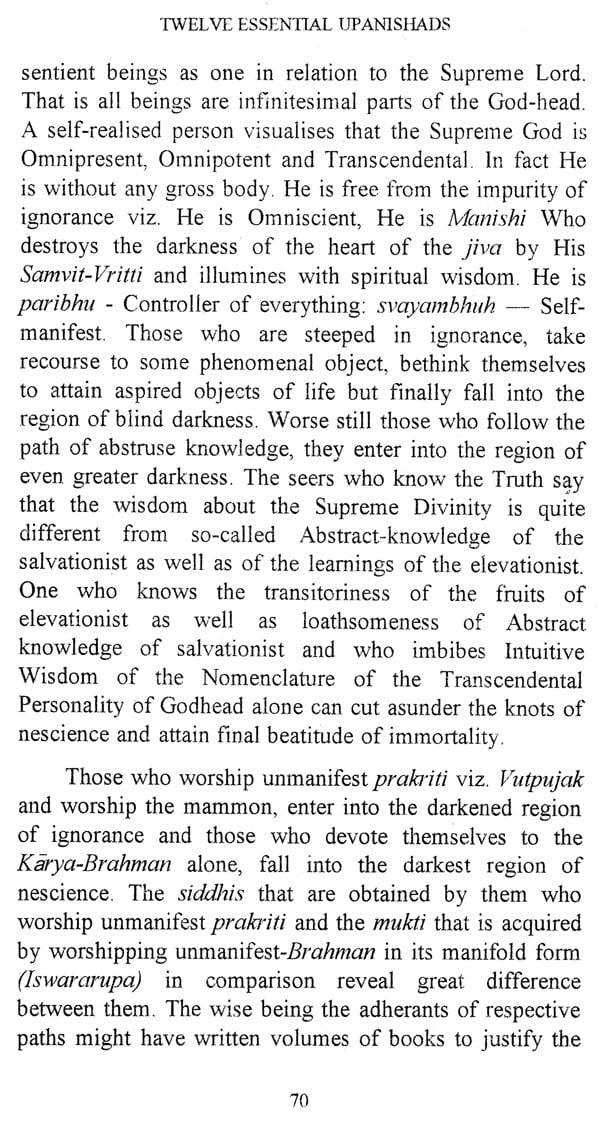 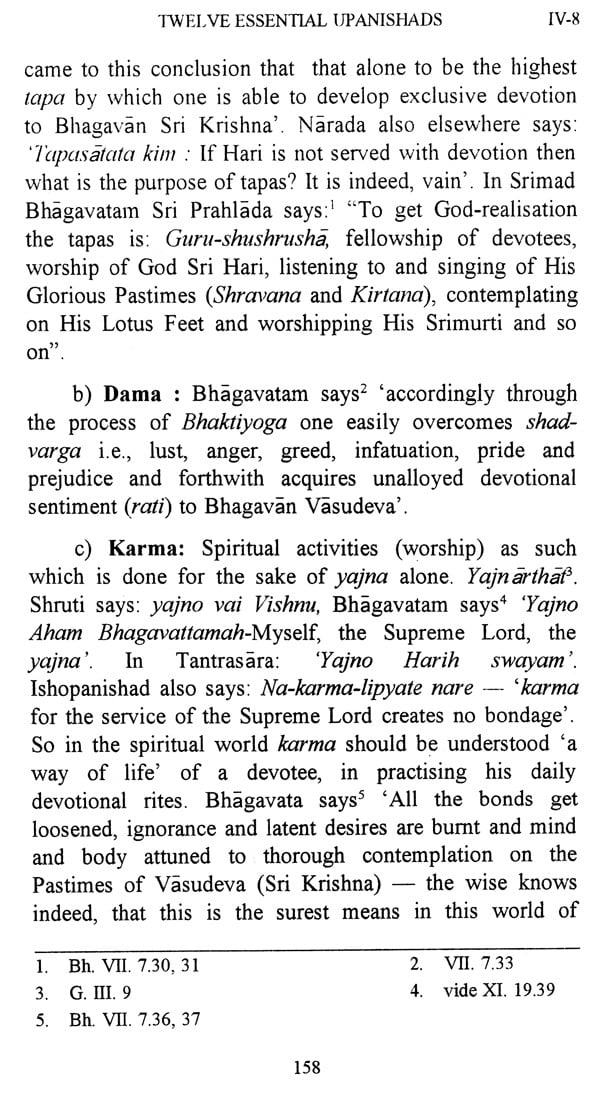 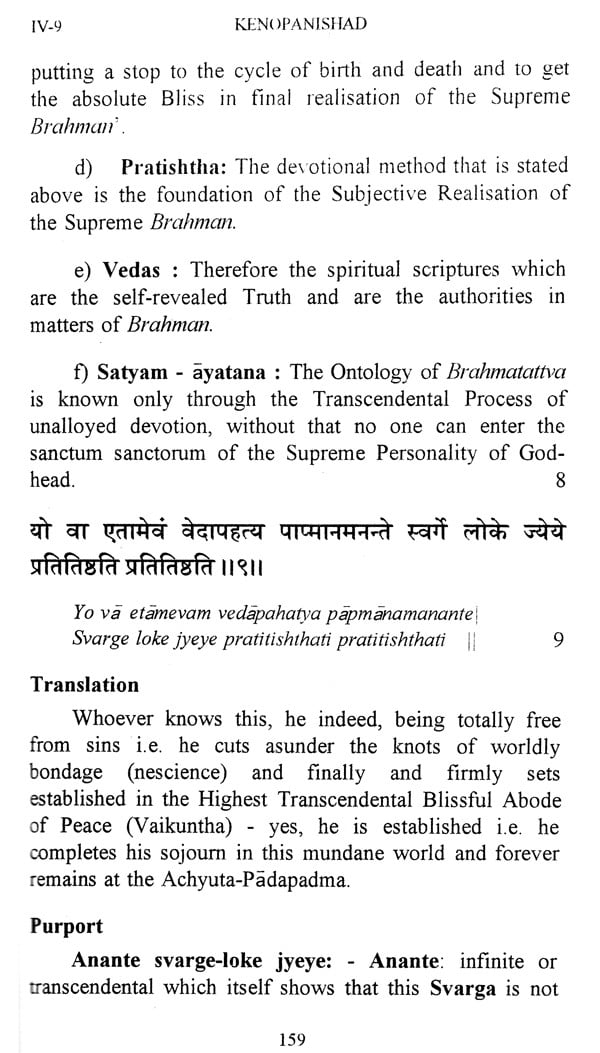 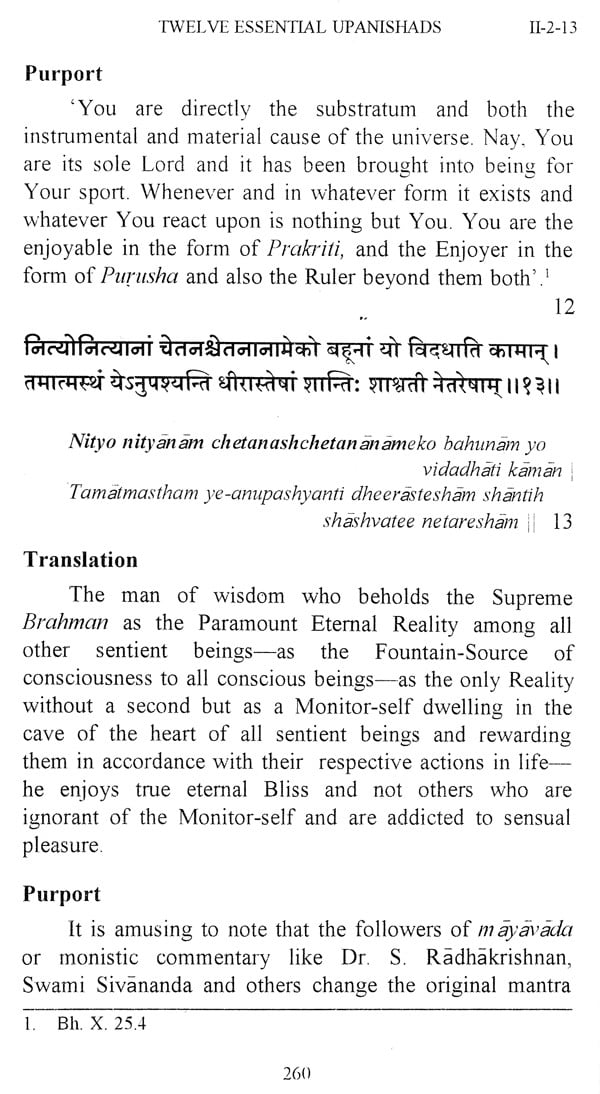 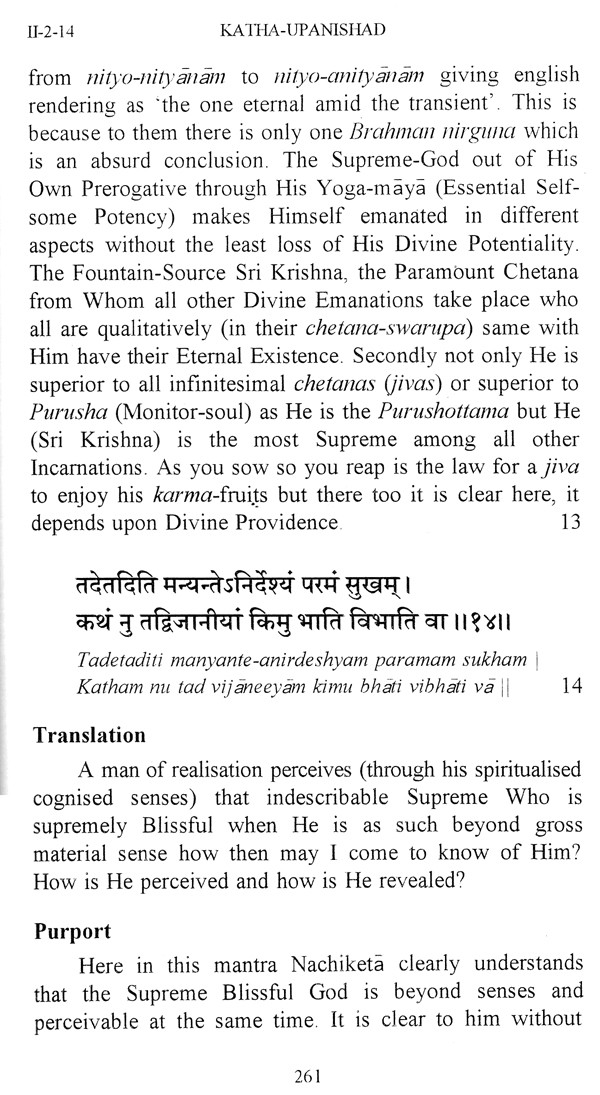 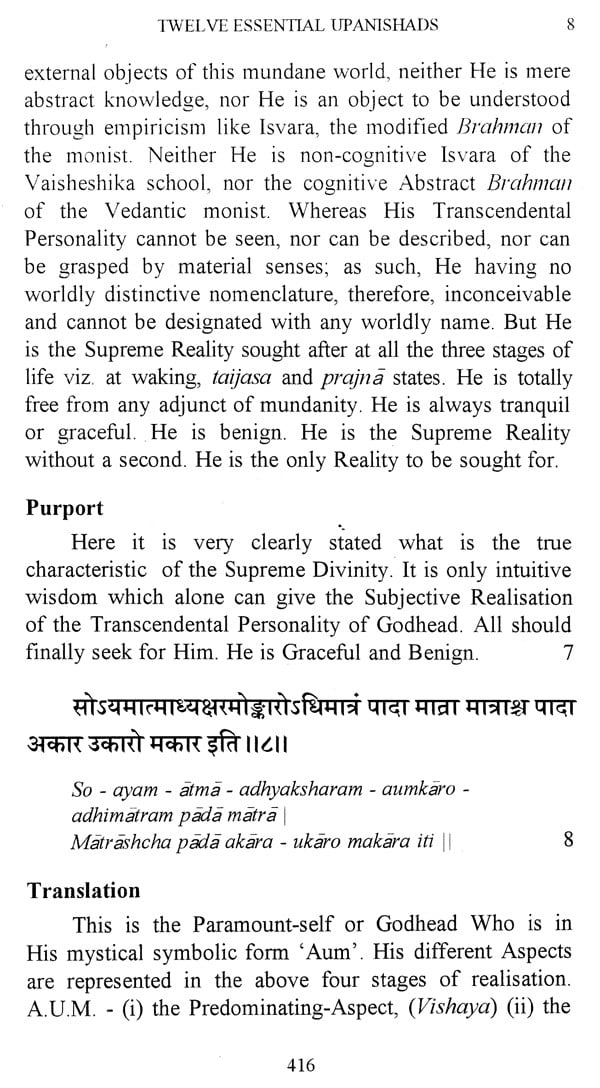 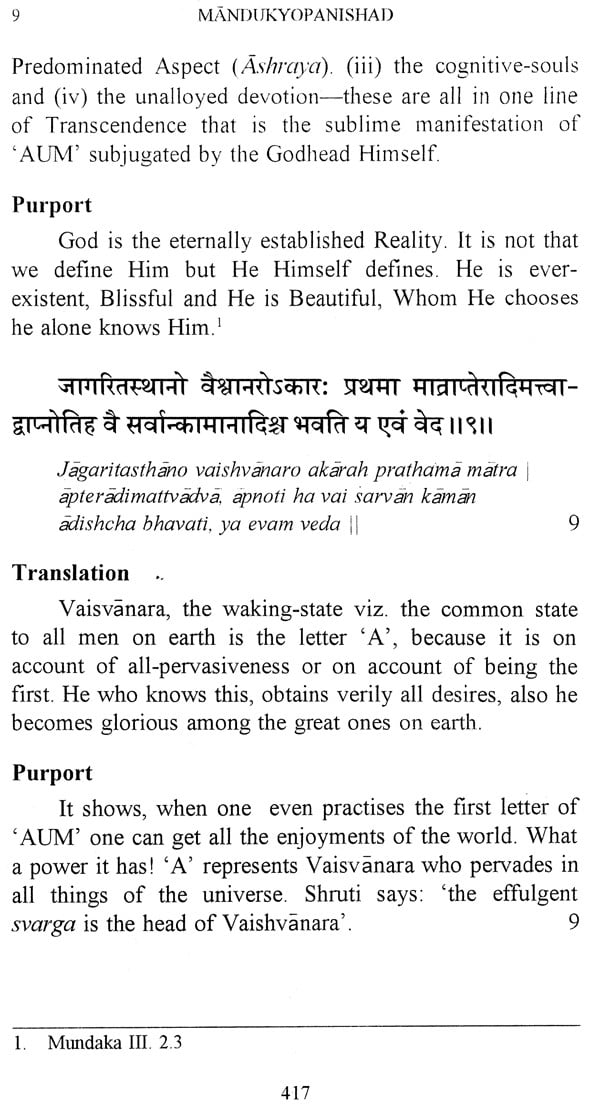