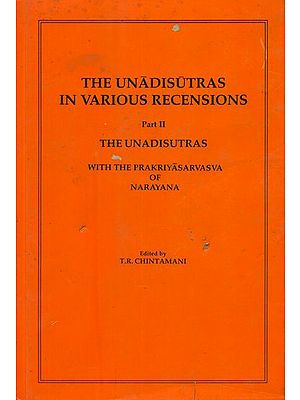 The most popular of the several sets of Unadisutras is the one that has been commented upon by Ujjvaladatta, Bhattoji Diksita and others. This is the most favoured Uhnadi as it belongs to the system of Panini.

It is with very great pleasure that I introduce to the worlds of scholars this second part of No. 7 in the Madras University Sanskrit Series, containing the Vrtti on the Unadisutras by Naryana Bhatta. The Unadisutra-vrtti forms the nineteenth section (khanda) in his work called Prakiyasarsva, which is a commentary on the sutras of Panini. This work has not yet been printed. Manuscripts are available in plenty, especially in South india. Brahmasri Pansit K. Sambasiva Sastri has begun the printing of this important work, and has issued one part containing Khandas 1-4 as No. In the Trivandrum Sanskrit Series.

The great merit of the works of Narayana Bhatta is the thoroughness with which he deals with the subject. He does not stop with explaining a point; he brings in all the subjects, and presents a comprehensive and comparative study of the subject. Thu, his commentary on the sutras of Panini forms a basis, not only for understanding the meaning of the sutras but also for reconstructing the history of the various systems of Sanskrit grammar.

It would have been possible for the Sanskrit Department to procure more copies. But the four manuscripts used have been found sufficient for the editor to present a correct text. Since a presentation of the contents in a correct form is more important than to give lengthy manuscript variants, it was thought advisable not to burden the edition with any more scriptorial and other pieces of information culled from a large number of manuscripts.

This edition of the Unadikhanda, a portion of the Prakriyasarvasva is based on the following mss:-

A. This is a palm leaf ms. of the Prakriyasarvasva, in Malayalam characters, belonging to the Adyar Library. (No. 40.c-3) The Ms. is fairly correct.

G. This is a paper ms. of the work, in Devanagari characters, deposited in the Government Oriental Mss. Library, Masrad. (R. 3091.) The ms. is full of scri[torial errors.

GD. THois is another paper ms. of the work in Devanagari characters, deposited in the Government Oriental Mss. Library, Masras. (Das. No. 15397.) This copy too is full of errors.

My Professor, Mahamahopadhyaya Vidyavacaspati Darsanakalanidhi S. Kuppuswami Sastrigal, Professor of Saskrit and Comparative Philology in the Presidency College, Madras, with his usual kindness, encouraged me in this publication with his valuable advice and timely suggestions. My teacher Brahmasri S. K. Padmanabha Sastrigal of the Presidency College, Madras, was kind enough to read through the proofs and rectify several errors. Dr. C. Kunhan Raja and Brahmasri S. K. Ramanatha Sastrigal, my colleagues in office, have rendered me valuable help in this publication. It was through Dr. C. Kunhan Raja that I was able to secure the ms. of the work from Pandit P. Nilakantha Sarma. Pandit S. K. Ramanatha Sastri read through the proofs in addition and I take this oppprtunity to express my deep obligations to them for the help they have rendered.

I am highly indebted to the Curator, Government Oriental Mss. Library, Madras, and the Director, Adyar Library for ungrudgingly allowing me the use of their libraries, by lending me the mss. whenever they were required. I thank Pandit P. Nilakantha Sarma For placing his ms. at my disposal till the completion of the printing of the work. I thank the Hindi Prachar Press for having printed the work neatly and to my satisfaction. 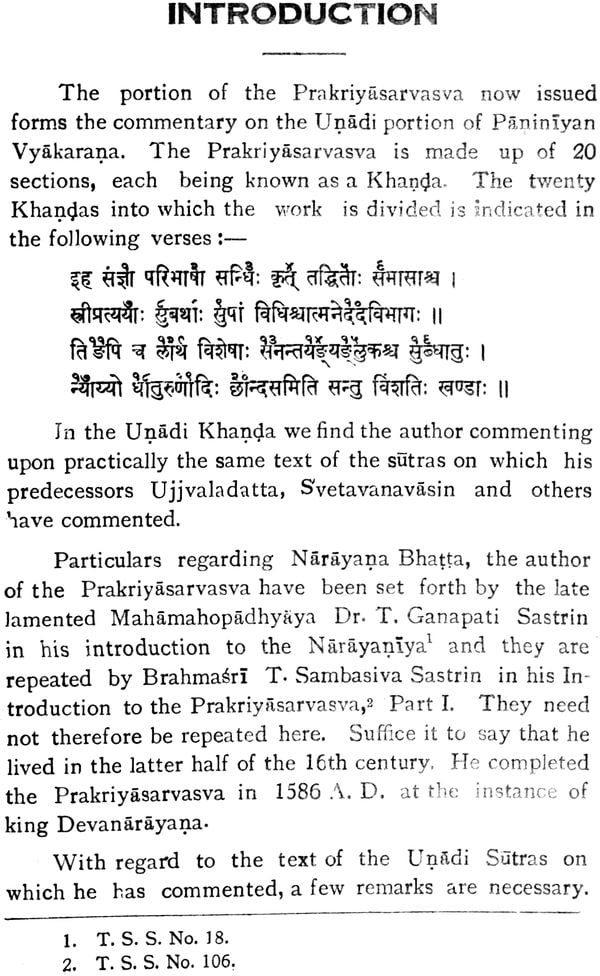 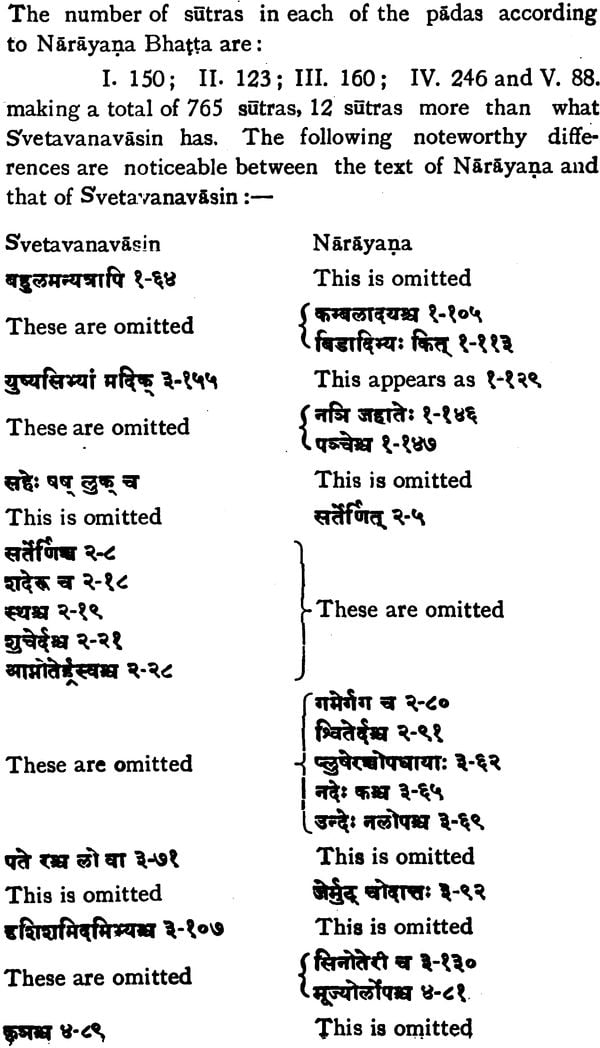 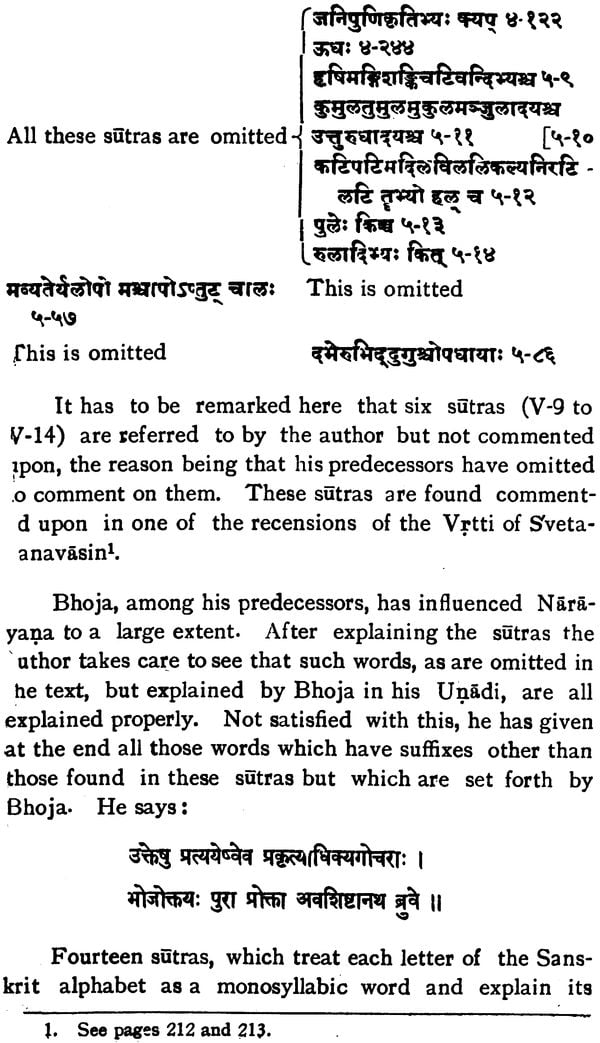 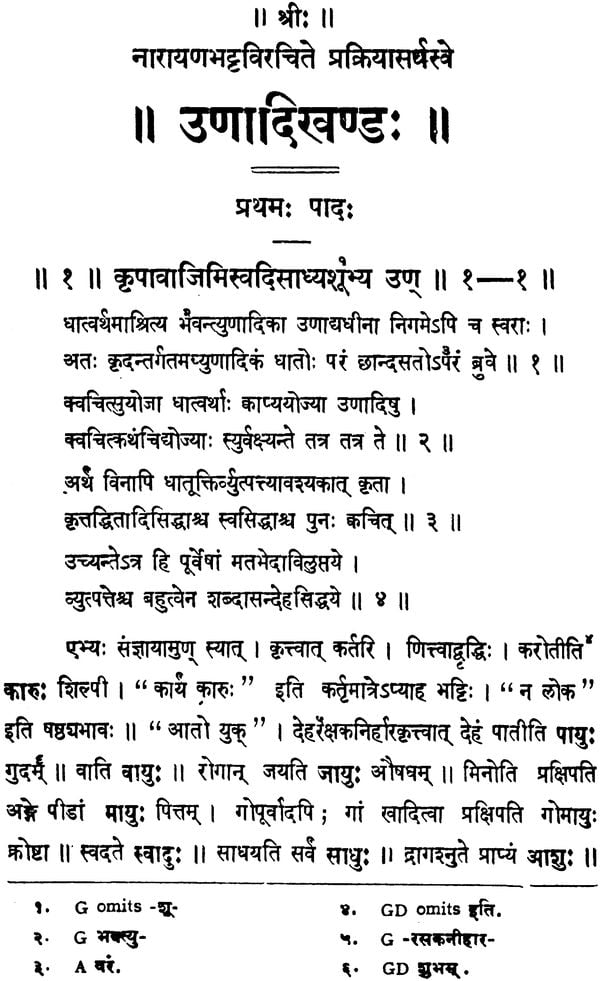 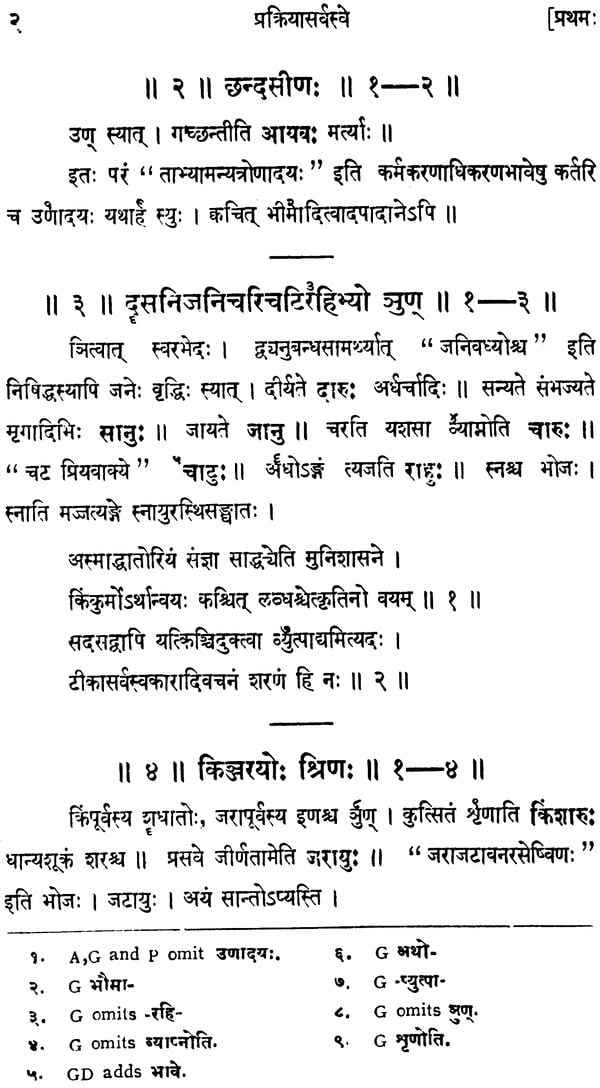 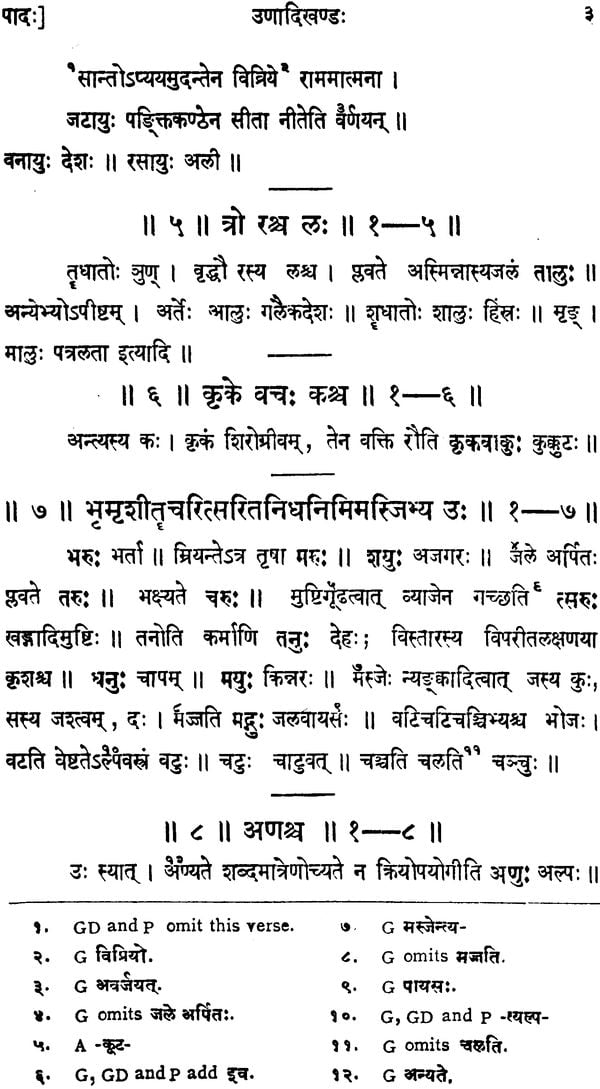 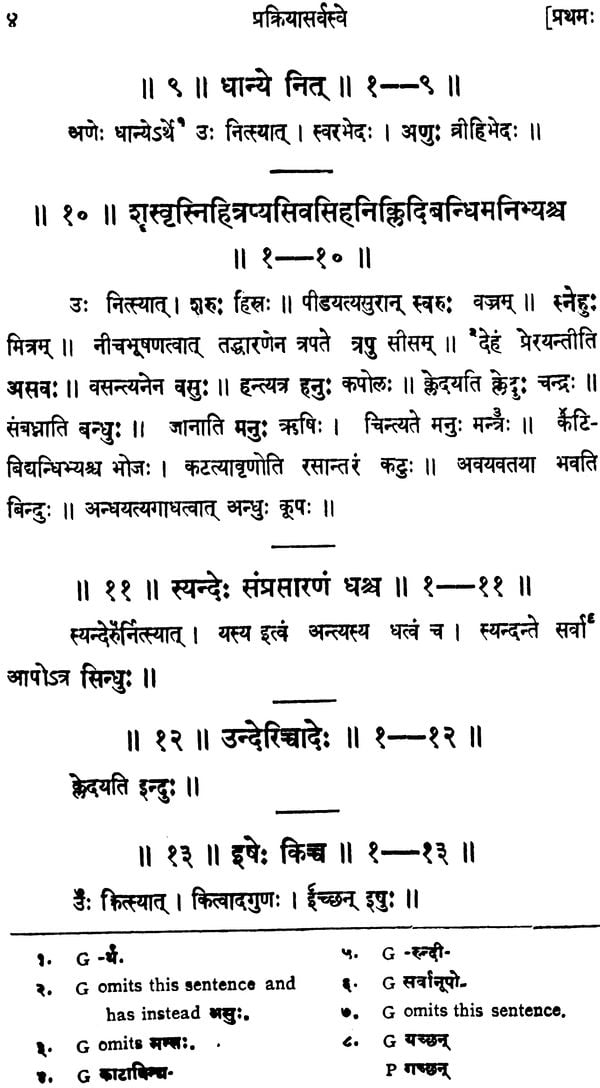 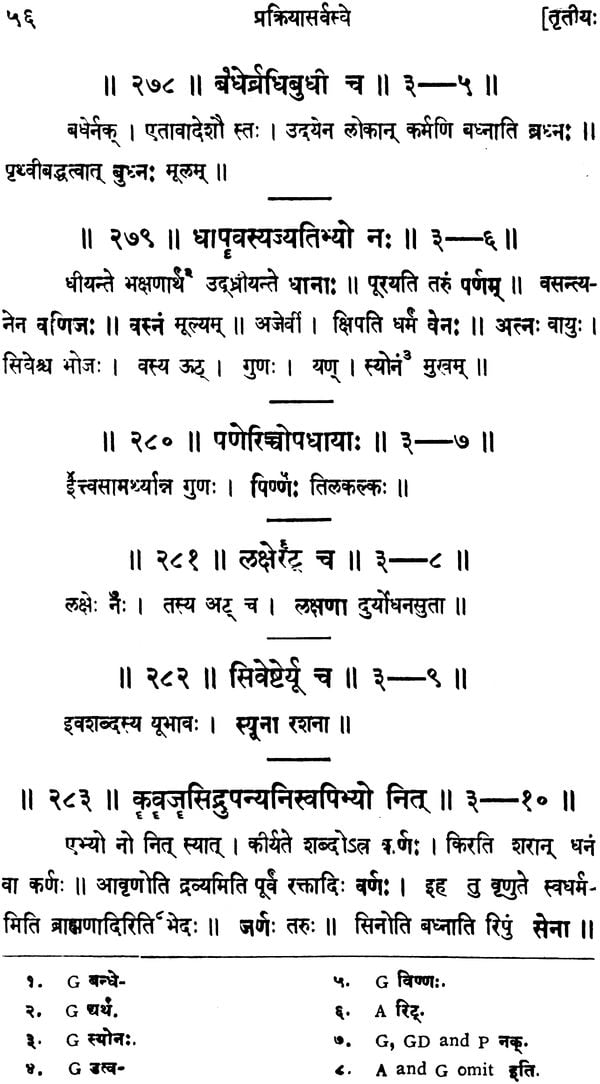 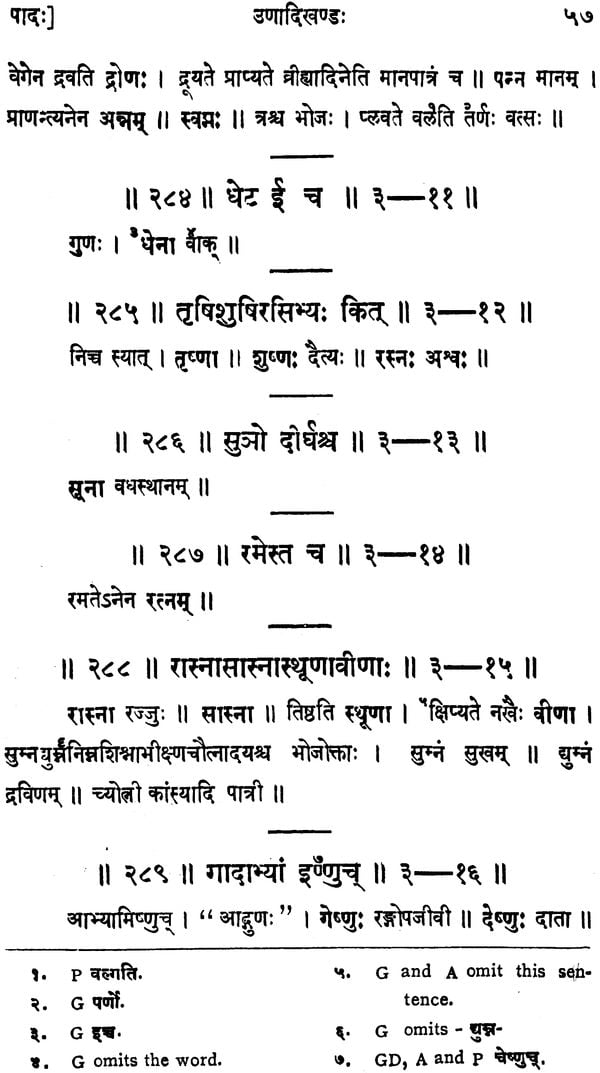 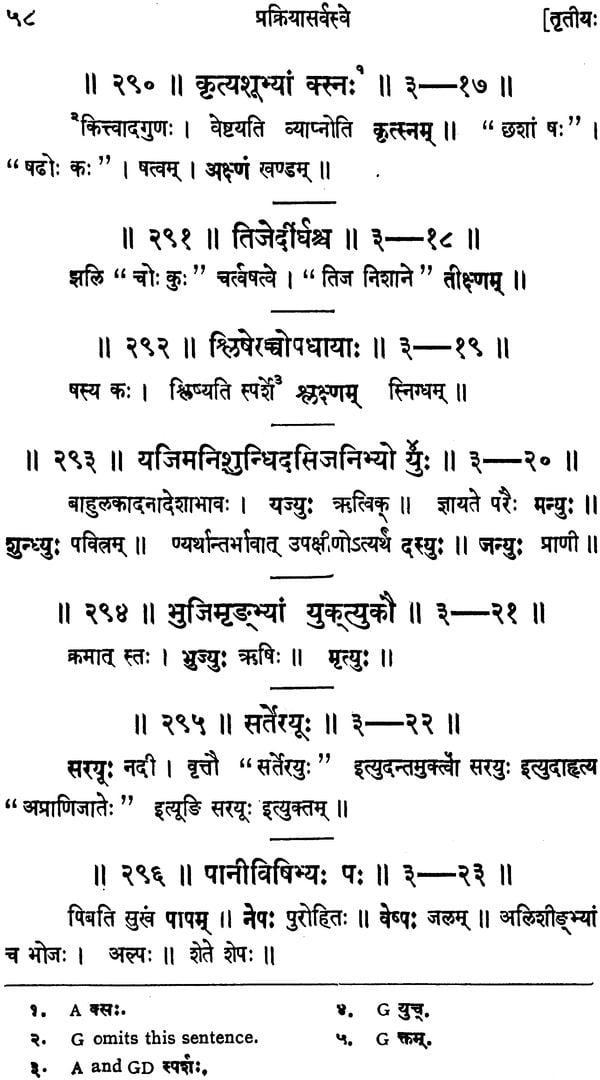 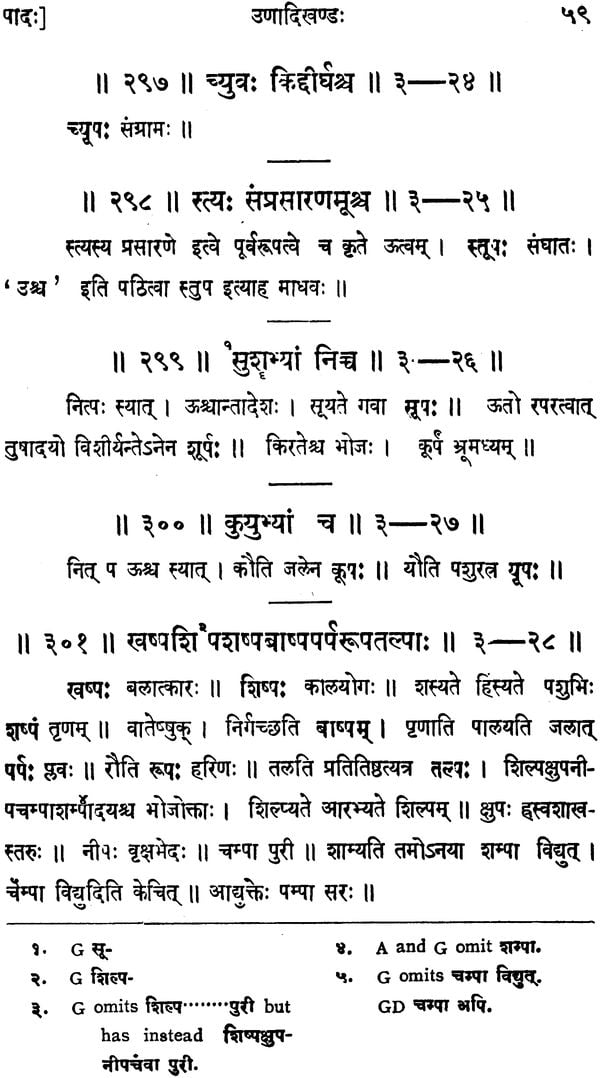 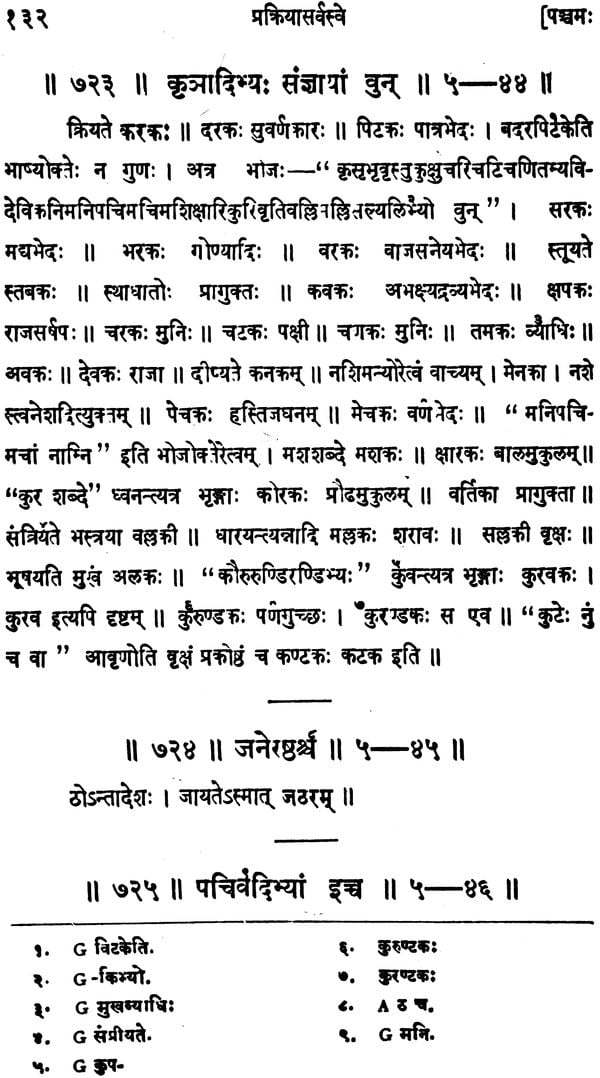 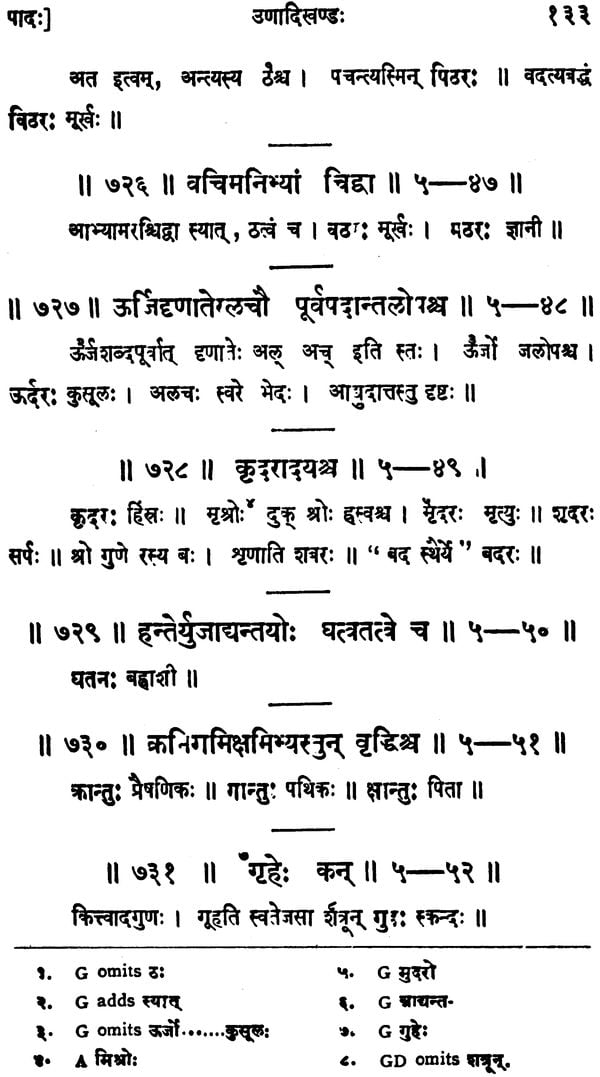 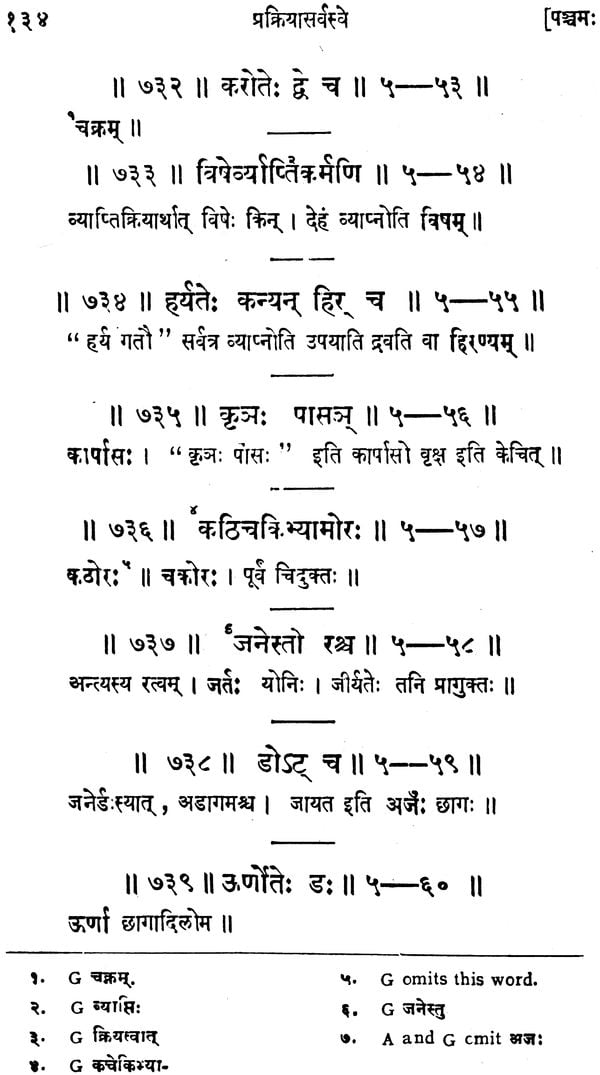 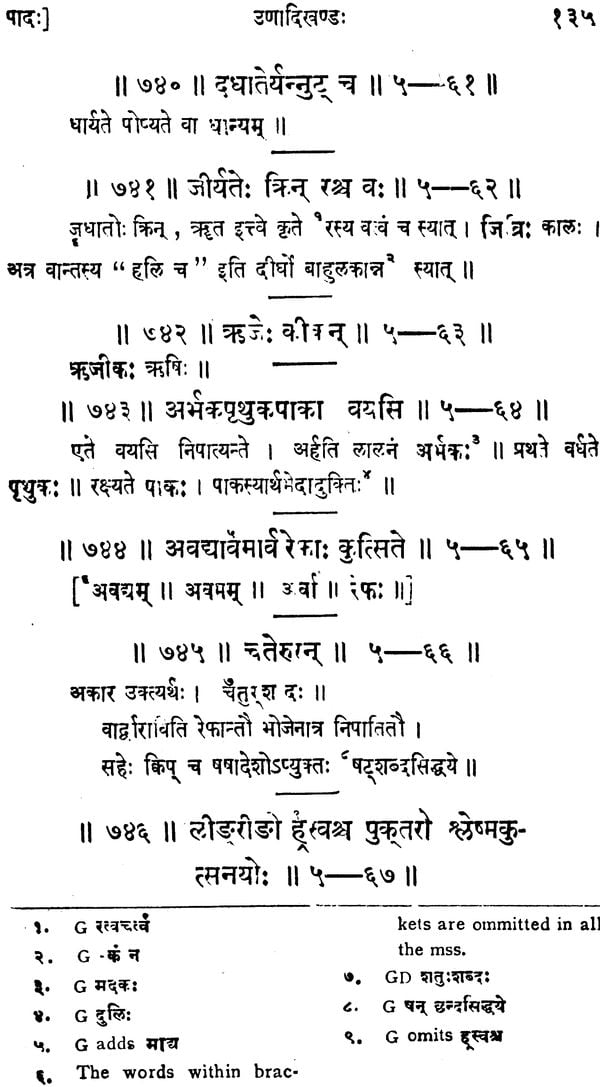 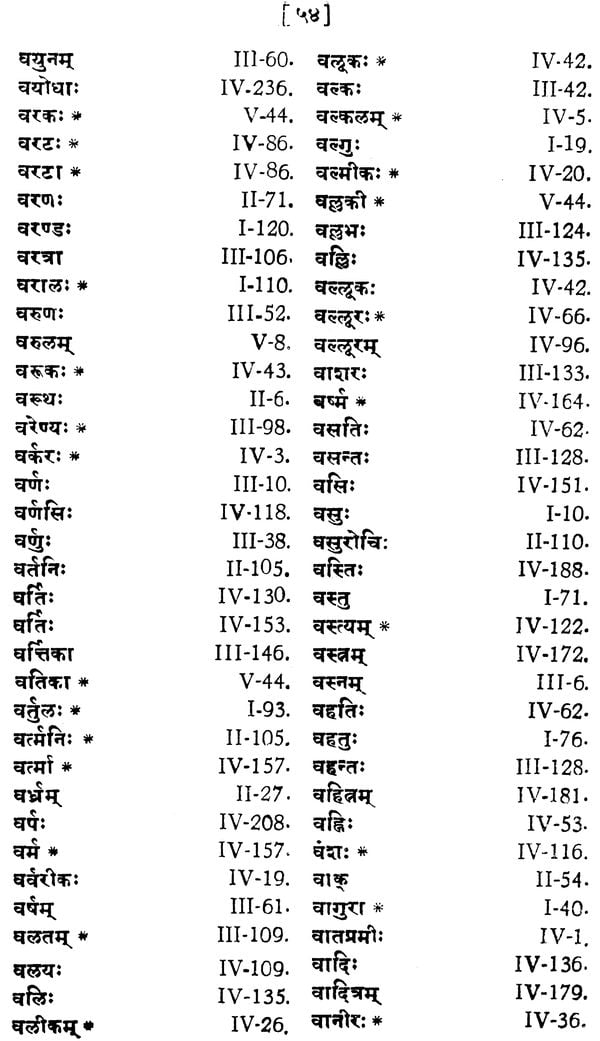 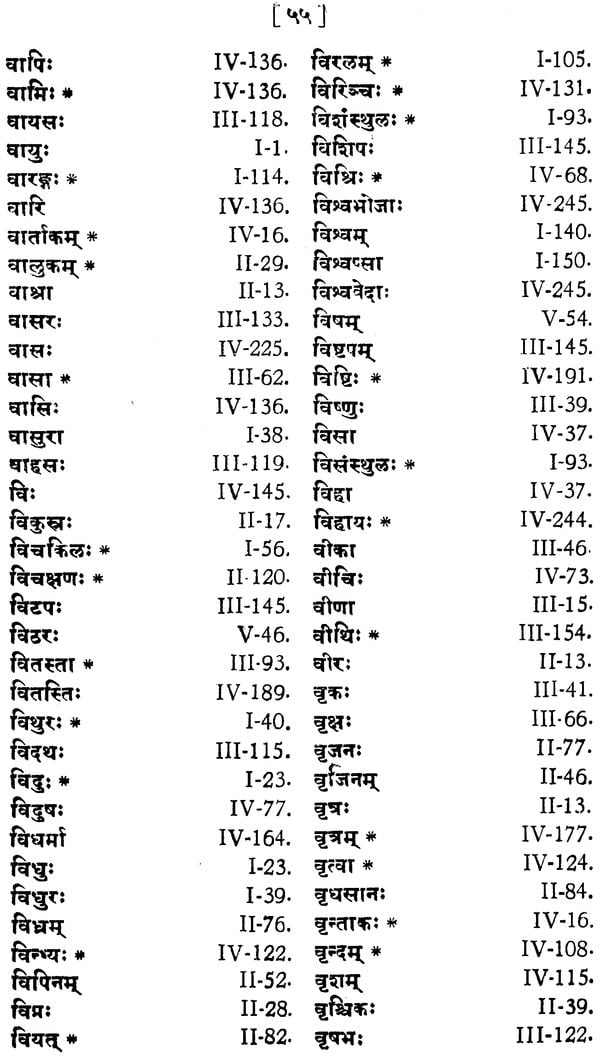 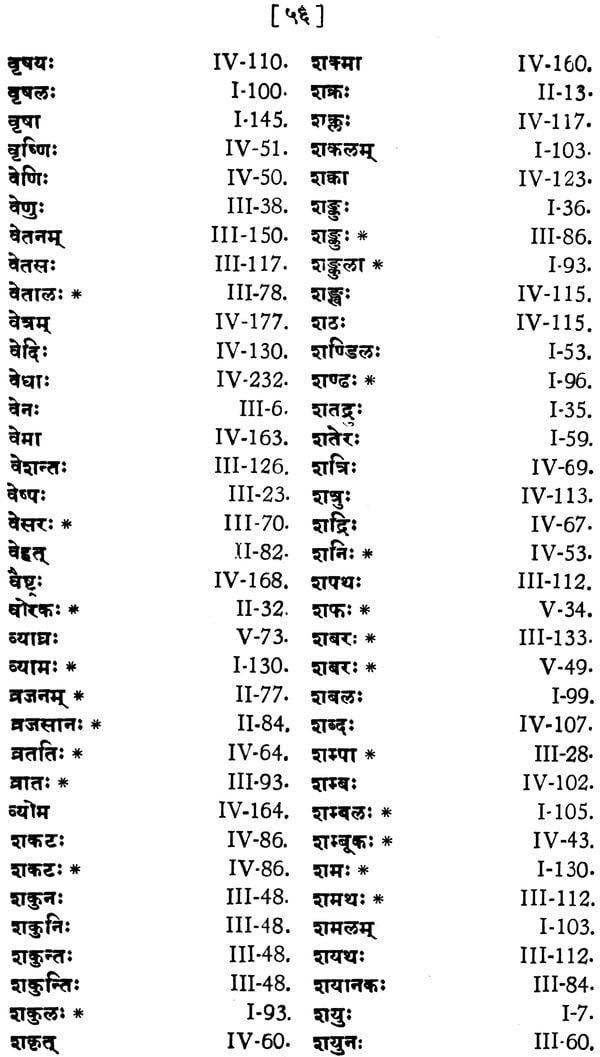 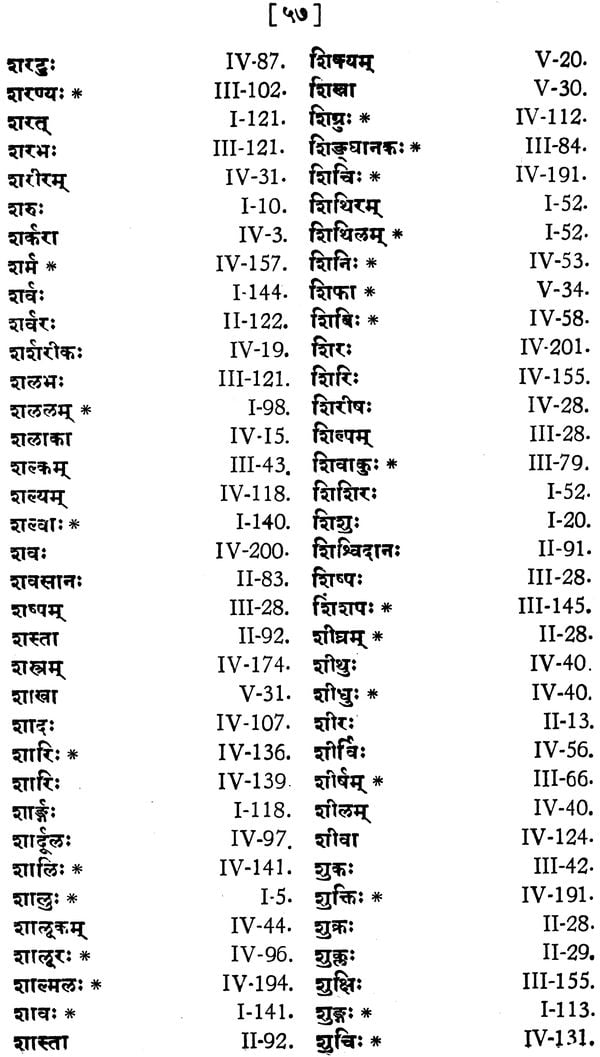 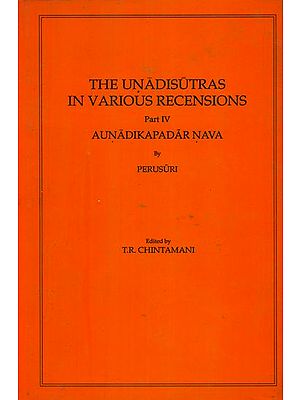 The Unadisutras in Various Recensions: Aunadikapadar Nava by Perusuri (Part IV) - An Old and Rare Book
By T. R. Chintamani
$31
Out of Stock 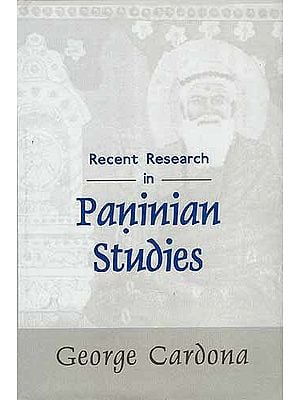 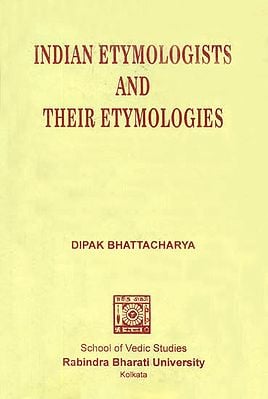 Indian Etymologists and Their Etymologies
By Dipak Bhattacharya
$16