VISUALIZING A BUDDHIST SUTRA: Text and Figure in Himalayan Art 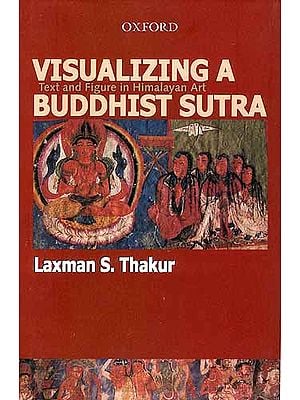 VISUALIZING A BUDDHIST SUTRA: Text and Figure in Himalayan Art

$30.00
FREE Delivery
Quantity
Usually ships in 15 days
Notify me when this item is available
About the Book:

Visualizing a Buddhist Sutra analyses the murals, inscriptions, and manuscripts preserved at Tabo, one of the earliest and largest Buddhist monasteries of the western Himalaya. The author presents an insightful comparison between text and mural, and also comments on the larger field of Buddhist art as being a mode of transmission of Buddhist ideas contained in the texts.

This volume documents for the first time a critical analysis of several hand-written manuscripts of the Avatamsakasutra from the collection at the Tabo monastery. Thakur focuses particularly on the Gandavyuhasutra, which forms part of the larger magnum opus. It details the various stages through which Sudhana, a seeker of truth, passed during his long spiritual sojourn, and prescribes during his long spiritual sojourn, and prescribes ways and means to attain the supreme perfect enlightenment.

The murals comprise lively and continuous narratives that successfully visualize virtually incomprehensible Buddhist teachings on the clay-plastered walls. They were created by highly-skilled artists and enlightened members of the Buddhist community to communicate the principle ideas expounded in the Sutra to a larger audience of both ordained monks as well as lay people. The author argues that the murals and inscriptions operate at multiple levels and enhance each other. They are part of the same narrative materialization, at times working simultaneously, and at times independently, according to the proficiency of the viewer.

Based on extensive fieldwork conducted by the author over a period of seventeen years in the Kinnaur and Lahaul-Spiti region, this book will fascinate students and scholars of Buddhist studies, comparative religion, and art history, especially those working on the relationship between religion and artistic representation.