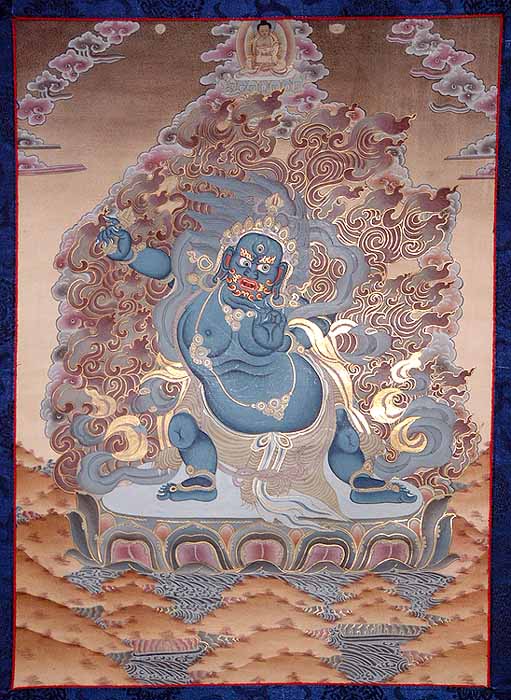 $215.00
Notify me when this item is available
Save to Wishlist Send as E-card Share by Email
The huge and gray lumbering form of Vajrapani displays his lolling red tongue, visible inside his open mouth. His elongated ear lobes are adorned with equally prodigious earrings, and in his crown can be seen a vajra, entwined around which is a snake. His ferocious eyes have small flames for eyebrows and even his beard is made up of small hook-like flames.

Vajrapani is believed to be the ferocious emanation of Akshobhya, the transcendental Buddha. Akshobhya can be seen at the top center of the painting.

It is recalled that when the Nagas (serpent gods) appeared before the Buddha to listen to his teachings, Buddha asked Vajrapani to guard them from the attacks of their mortal enemies, the garudas. In order to deceive the garudas, Vajrapani assumed a form with the head and claws like the garudas themselves.

Vajrapani is believed to be the savior of snakes (nagas), and since the Nagas are believed to control the rain-clouds, Vajrapani as their protector is looked upon as the Rain God, and it is to him Buddhists appeal when rain is needed, or is too abundant. In this capacity Vajrapani is identified with Indra, the Indian god of Rain.

All thangkas come framed in traditional silk brocade, and complete with hanging rods and silken veil.