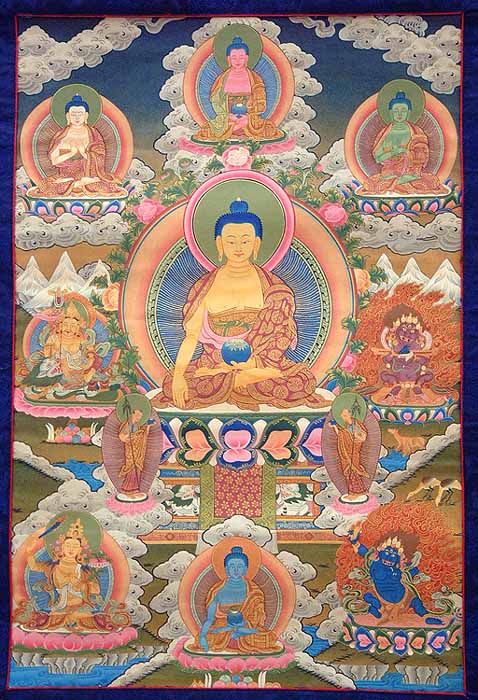 $265.00
Notify me when this item is available
Save to Wishlist Send as E-card Share by Email
The five Great Buddhas of Wisdom are of uncertain origin, although their existence and their appearances appeared relatively early in India. Various symbolic interpretations have been placed upon these five Buddhas better known as the five 'Dhyani Buddhas.' They are believed to represent the five great moments in the life of Buddha, the five typical elements of Indian philosophy or the five directions. However the most important attribute that esoteric Buddhism places upon this set of five Buddhas is their ability to transform the five great human delusions into specific positive attributes. Here at the center sits Dhyani Buddha Akshobhya. He displays the bhumisparsha mudra. It is believed that by meditating on this deity the human imperfection of anger can be transformed into mirror-like wisdom.

Just above him sits Amitabha, better known as the Buddha of longevity. He displays the dhyana mudra. By meditating on him, the delusion of attachment becomes the wisdom of discernment. The dhyana mudra helps in achieving this transformation.

At the top right sits Vairochana. He displays the Dharmachakra mudra, and helps mortal beings overcome the delusion of ignorance by transforming it into the wisdom of reality.

At the top left is Amoghasiddhi displaying the abhaya mudra. By meditating on him, the delusion of jealousy is transformed into the wisdom of accomplishment.

Finally at the center of the bottom layer is shown Ratnasambhava displaying the varada mudra. Under his spiritual guidance, the delusion of pride becomes the wisdom of sameness. The Varada mudra is the key to this transformation.

At the right hand of the central image of Akshobhya can be seen Vaishravana the god of wealth, seated upon a white snow lion. His large, rounded body is golden-yellow in color and his expression stern. In his right hand he holds a banner of victory and in his left a mongoose, an animal associated with good fortune, which is shown vomiting jewels.

At the left hand of Akshobhya is Mahakala in his incarnation as Mahakala Panjaranatha or the Lord of the Pavilion. This particular form of Mahakala, easily recognized by the wooden gong he carries across his arms, is a favorite protector of the Sakya Order. He stands heavily upon a human corpse, and holds in his hands a huge vajra chopper and a large white skull bowl full of the blood and guts of demons turned into elixir. He carries across the crook of his elbows an ornamented wooden gandi gong, used in Buddhist monasteries to call the Buddhist monks to assemblies, symbolizing his vow to protect Nalanda monastic university and by extension all Buddhist monasteries.

Finally at the extreme right in the lower layer stands Vajrapani, deep blue in color. He wears a tiger skin cloth wrapped around his waist. This is a symbol of fearlessness. Both of his hands are in the threatening mudra used for overcoming hindrances, and in his right hand he holds a vajra, or diamond-hard scepter. Just as the Olympian Zeus brandishes a thunderbolt as a symbol of his might, Vajrapani wields a vajra symbolic of the enlightened power of spiritual awakening.

This thangka is characterized by a disciplined mastery over line, and though the painting is enchantingly colorful, the hues nevertheless are restrained, lending a homogeneity to this diverse composition made up of both peaceful and wrathful deities.