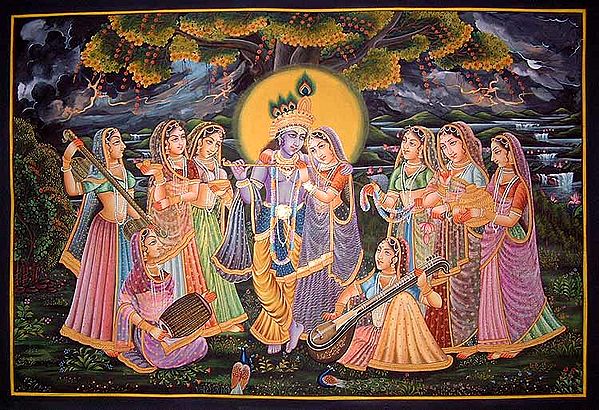 $115.00
Notify me when this item is available
Save to Wishlist Send as E-card Share by Email
Love is a many splendored emotion. It is most splendored when it is totally selfish, and devoid of possessiveness. The gopis, virtuous cowherdesses, whose sole preoccupation was Krishna, showered on him an affection of this kind.They loved him with complete dedication and surrender. They were contended with Krishna sporting with all of them at the same moment, not a twinge of jealousy creeped in. They were all aware that no way could they become the preferred mistress of their lover's heart. This because Krishna had handed over the kingdom of his heart to Radha, the major benefactor of his amorous activities.

Here too, eight graceful gopis, clad in their tightly stretched cholis, look on lovingly as Radha and Krishna stand cosy in an affectionate embrace, Radha even having been given the privilege of co-holding his flute. The golden halo surmounts both Krishna and Radha, symbolizing that this union has divine sanction.

The gopis each hold a different auspicious object in their hands. While the one seated on the left joyfully beats a drum, the one standing just behind her gracefully plucks the strings of a veena. Another one her holds a puja (ritual) thali, containing a miniature replica of a temple, while the lady nearest to Krishna holds a bowl of milk.

At the right, the lady seated soulfully plays the sitar, and the one standing next to her holds a kalash or sacred pot, so necessary in any Hindu ritual. The next gopi a holds full blown lotus and the last one has gathered in her hands a garland of fresh flowers. Charmingly, these objects have both sensuous and sacred connotations, thus setting the mood for the entire painting which is similarly enhanced by the dark and cloudy heavens, with streaks of the setting sun peeping from behind the clouds, wherever the lightning manages to rip them apart.