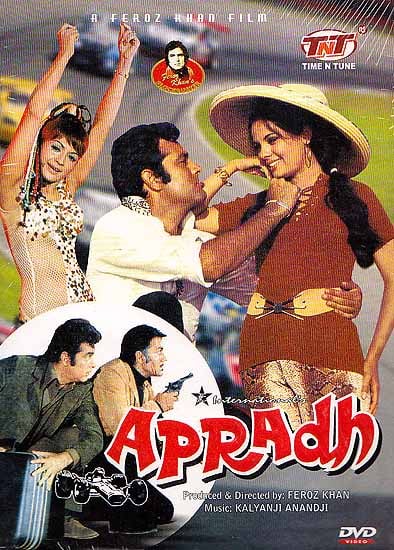 Let a Hundred Guilty go Gree, But not One Innocent Be Punished. This has been a cardinal principle, guiding civilized humanity through ages. Alas, Ram though innocent, was proven guilty to suffer imprisonment for an act of smuggling contraband from abroad.

A spirited young sportsman, Ram is seen participating in several world famous car racing classics. This for him was a dream come-true, made financially possible by his elder brother Harnam. Comes into his life a beautiful girl called Rita, but named Meena, a jet - set girl, speeding her life’s journey precariously, which eventually proves her flimsy cover for her involvement in some sort of crime.

Convinced of Meena’s helplessness, Ram braves hazards to his life, frees Meena from the sinister clutches of Nath and his criminal gang.

By now, they are deeply in love. Though danger lurks at every step, Ram after winning the International Car Race, manages to reach the airport, to emplane along with Meena for India. Ram at the airport is approached by a stranger, giving a packet of medicines for Harnam. The packet does not contain any sort of medicines but diamonds.

Innocent Ram had no knowledge about the contents. But Harnam had. And Harnam’s arch enemy Arab Sheikh, was on Harnam’s tracks and informed the police. Arab Sheikh had an old score to settle with Harnam, a gang rivalery. Honour among thieves was something Harnam and Sheikh did not believe in, and the victim of this cut-throat villainy was poor Ram, now arrested and sentenced for an act of crime he was completely innocent of through untold sufferings, pinning for each other.

But Ram is lovingly compensated to find Meena waiting out-side the prison gate, upon his release. Her smile is reassuring, and the lovers get immediately married to start a fresh life of love and peace.

Ram and Meena’s dreams of living happily ever after, are shattered by Harnam’s sudden intrusion into their life. Harnam tries to lure Ram into his nefarious future plans-of getting quickly rich. Meena stands steadfast by Ram’s reluctance. A stray remark from Ranjit, a henchman of Harnam, about Meena, infuriates Ram into violence, smashing Ranjit into a bloody mess. Ranjit humiliated, swears to wreck vengeance.

Ranjit implicates Ram in robbery and murder, resulting in Ram sustaining serious injuries, as well being hunted by the police. Ram hospitalized, is persuaded by Harnam to accept his plan for a safe get-away. Ram being under police custody has hardly a choice. Ram hesitates, implored by Meena to trust in law and justice Harnam’s cunning arguments, eventually work on Ram’s resistance, trapped into the conniving schemes of his brother. He escapes from the police and the hospital authorities as arranged by Harnam. To further his vendetta against Arab Sheikh and his gangs Harnam master-minds a scheme-to rob him of almost 50 lakhs of rupees. He gets Ram involved, promising him a kind of paradise, free from worries.

Ram, long cherished a care-free life with Meena - a place in the sun”, worn out by now by the hard knocks offate.

“But What Man Proposes God Disposes” Did Ram get the millions to build his paradise? Did Meena and Ram live haply ever after?

What happened to the Arab Sheikh, venomous Ranjit, and money-obssessed Harnam? This all you will see in the film “APRADH”