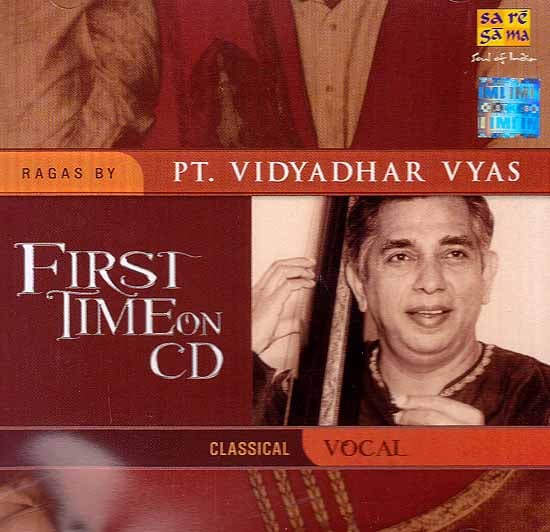 In the world of Hindustani Classical Music, Pt Vidyadhar Vyas is a name to reckon with. A blend of the prestigious tradition of the Gwalior gharana and the illustrious lineage of Sangeet Maharshi Pt. Vishnu Digambar Paluskar, lent an unparalleled style to his music even as he was groomed in khayal, tarana and bhajan gayaki by his renowned father Gayanacharya Pt. Narayanrao Vyas, himself an outstanding disciple of Pt. Paluskar. Harnessing his creative leanings, artistic approach and arduous research in the gharana gayaki along with his committed riyaz, he has matured as a maestro in his right.

Blessed with a voice that is soothing. Pt. Vyas presents a Khayal’s form and content in a manner that preserves the conventional richness of classical music. He takes utmost care to sustain and develop the Raga rasa (essence) and brilliantly harmonizes it with the bhava (emotion) of the compositions. Pt. Vyas is also acclaimed for his khayal and tarana compositions which are treats of pure joy and ecstasy to his listeners.

Awarded “Top Grade” status by All India Radio, Pt. Vyas is an equally popular artiste in the television medium and has several albums to his credit. A top – notch concept performer, he has earned national and international acclaim with creditable performances in almost all the major festivals in India and abroad.

Having contributed several articles to leading music journals, he has also conceived an presented a variety of programmes on the genesis and evolution of Hindustani Raga Sanger. Pt. Vyas also excels in conducting lecture demonstrations, which are both enlightening and entertaining.

Pt. Vidyadhar Vyas has been honoured with many awards and titles by various cultural organizations, including the National Award by Sanger Natak Academy, Government of India.

The album opens with the majestic Raga Malkauns, a night melody. Pt. Vidyadhar Vyas’ command over the intricacies of Hindustani Classical Music is showcased brilliantly in this piece. He begins the redition with Vilambit Khayal in Tilwada. This is followed by a Khayal in Drut Teentaal. Pt. Vidhyadhar Vyas concludes this rendition with a crescendo, viz, the Tarana, thus giving us a true essence of the Gwalior gharana.

Bhairav Bahar, a Jod Raga, is a speciality of the Gwalior gharana. In the two bandishein, Pt. Vyas explores the complexity of the melodic and rhythmic structure, thereby making it a memorable performance.

“Suneri Maine Nirbalke Balraam”, the concluding bhajan in Raga Bhairavi is a befitting end to this extraordinary album which gives us an insight into the rich Paluskar tradition.