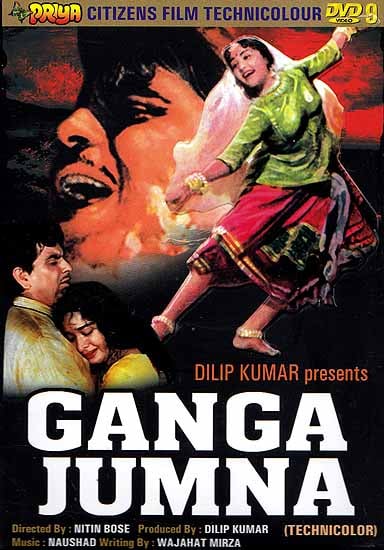 Ganga and Yamuna: A Dramatic Story about Two Brothers on the Opposite Sides of the Law (Hindi Film DVD with English Subtitles) (Ganga Jumna)

The film is a story of two brothers on opposite of the law Ganga(Dilip kumar) and Jamuna (Nasir Khan), having been framed for a crime he did not commit by A Zamindar (Anwar Hussain), Ganga Become a Criminal Living in the mountains with his Girl friend, Dhanno (vyjayantimala). Jamuna, Educated Onganga’s money in his the city, becomes an upright police officer. When years later Ganga is the Name of Duty, Dhanno also dies in Thegun Battle, Ganga Jamuna is a Dacoit Drama taking off from Hollywood Gangsterfilms like Manhattan Melodrama (1934), And Pioneered a widely copied action formula of two brother rather than buddies like in Manhattan Melodrama of Kids who have Grown up in the Same Block like angels with dirty faces (1938) and what’s more real life brother Dilip Kumar and Nasir Khan play the Protagonists!

And like most of films of this Type, the focus and sympathy is totally on the good man who is farced by circumstances to turm bad. But having taken Up a life of crime, his redemption, in spite of all that he has gone through, comes only with his death. Directed by new theatres old-timer Nitin Bose (thogh Supposedly Ghost directed by Dilip Kumar) Ganga Jamuna is a well structured and Briskly paced film and was notable of the use of Bhojpuri Dialect, which helps make the latter who in real and gives if a proper locale and geography. The performances by lead artistes Dilip Kumar and Vyjayantimala are faultless and full marks to the latter who in spite of her south Indian upbringing speaks the Bhojpuri dialect flawlessly. While Vyjayantimala deservedly won the filmafare award that year for best actress, shockingly Dilip Kumar Lost out to Raj Kapoor for the best actor award which the latter won for his production Jis Desh Mein Ganga Behti Hai (1960) the Lyrics of the film also make use of the Bhojpuri flavor and Naushad’s earthy music naturally does its work to enhance the film without Thrusting itself too obtrusively of the attention of the audience, Nain Lad gayin re( sung by mohd. Rafi Sahib, Do Hanson Ka Jada and Dhoondo Dhoondo Re Saajna (both sung by Lata Mageshkar) are particularly well tuned and were popular hits, Ganga Jamuna is one of the few Indian films that Enjoy legendary cult status and to runs to packed houses even when released today.