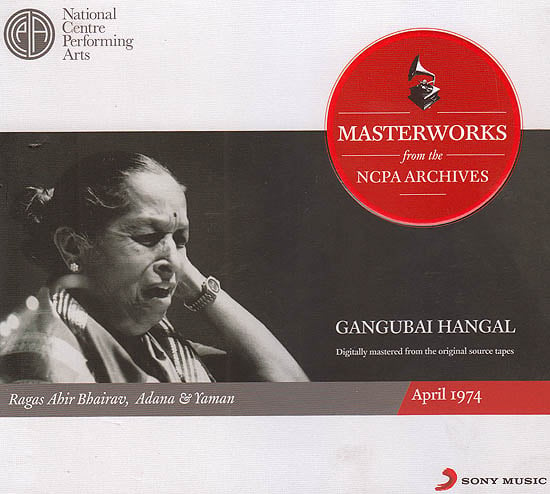 Gangubai Hangal
The Kirana Gharana is perhaps the most popular style of vocal music. The originator of the Kirana style of singing as it is known today is Ustad Abdul Karim Khan who taught the legendary Sawai Gandharva and whose melodious voice had the strength to influence teenager Bhimsen Joshi to leave his home in pursuit of Music. The music of the Kirana gharana with its emphasis on note by note progression and leisurely expansion of the raga theme spread all over the sub continent thanks to singers of the eminence of Sawari Gandharv, Bhimsen Joshi, Gangubai Hangal and many others.

Gangubai Hangal was born on March 5, 1913 in the city of Dharvad in Karnataka. Born to a mother who was an expert in Carnatic music singing was already in her genes. She started her music career from the age of 13 years studying Hindustani classical music under the legendary Sawai Gandharva. Living in a small city of Karnataka had its disadvantages for Gangubhai Hangal, being conservative and male dominated with women not having the complete freedom to follow their hearts desires. However Gangubhai Hangal’s determination allowed her to overcome all barriers to go on to become one of the foremost singers in the country.

As a schoolgirl she sang the welcome song at the Congress session which was presided over by Mahatma Gandhi in Belgaum in 1936 she sang for the first time on all India Radi going on to become a regular feature on all India radio from then onwards. She made it a point to sing at festivals around India to which she was often invited especially the Ganeshotsava celebration in Mumbai. Gangubai initially performed light classical genres including bhajan and thumri. However after several performances she gradually shifted her preferences to pure ragas.

The Karnataka state government and the government of India besowed on Gangubai Hangal a number of awards to recognize her immense contribution and achievements in the fields of Hindustani classical music including the Padma Bhushan in 1971 the sangeet Natak Akademi in 1973 and the Padma Vibhushan in the year 2002.

The NCPA Archives
Described as the Treasure trove of Indian classical music the NCPA archives has over 5000 hours of music of the who’s who of classical music both in the Hindustani and Carnatic Styles. Maintained for over 4 decades in the most ideal conditions of temperature and humidity and on the best recording formats the NCPA Archives preserves and protects India’s rich musical heritage.

According to the Artists themselves the work recorded on the Archives features some of their best works recorded at the prime of their careers. This wonderful ‘khazana’ is being presented to the music loving public for the first time.