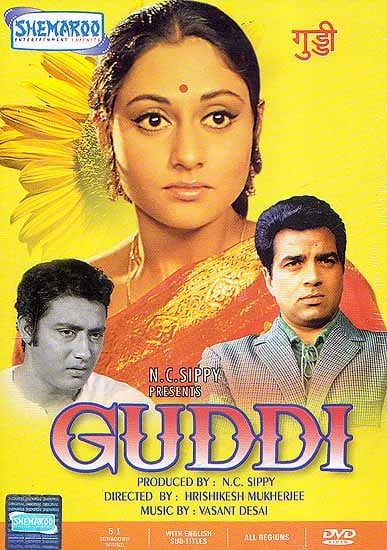 Guddi The Doll: The Light, Tender Story of a Young Girl Obsessed with the World of Films (Hindi Film with English Sub-Titles) (DVD)

Kusum (Jaya Bhaduri), a schoolgirl, the family moppet has developed as awesome crush on Dharmendra, a film star. On meeting him, when he is on a shoot near by she is all the more smitten by him. She moons around the house, barely heeding anything said to her. While her parents have selected a sober young man for her as husband she is bent upon continuing dreaming of her idol-Dharmendra. It is only when the family moves to Bombay, due the some family problems, and witnesses a shooting with her hero sitting on the sidelines and the doubles doing the fights and stunts, that she realizes that what she loved and adored was only an image and not the real man. Slowly she realizes that the boy chosen for her as husband is truly capable of loving her as herself.

A tender, heartwarming film from Hrishikesh Mukherjee, a director who is equally adept at making lighthearted comedies as he is in making heart wrenching sentimental films. This movie boasts the classic song, “Bole Re Papi Hara”, excellently rendered by Vani Jairam.