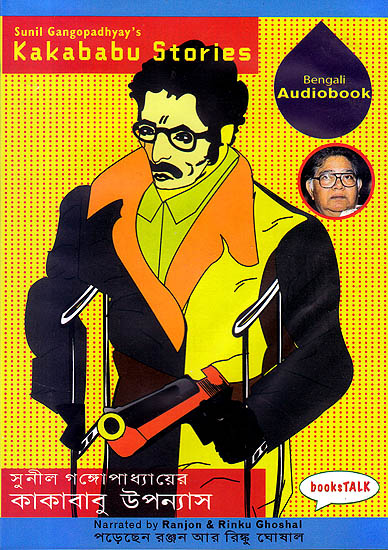 Sunil Gangopadhyay
Is an icon of contemporary Bengali writing. Poet and author of over 200 books he is currently the president of the sahitya Akademi. His works have been the basis of several Satyajit Ray Films like Aranyer Din-ratri and pratid-wandi. His work of historical fiction, sei Somay won the Indian Sahitya Akademi award in 1985 and continues to be a best seller after 25 years. He is also the winner of the Bankim Puraskar (1982) and the Ananda Puraskar (twice in 1972 and 1989).

Though he has written all types of fiction the star among these is Kakabau the crippled adventurist accompanied by his young nephew Shantu and his friend jojo since 1974. Sunil Gangoapdhyay has written over 35 novels of this popular series most of which appeared in Anandamela magazine.

We at books Talk audio books are grateful to Sunilda for his support in bringing you these audio books of his works. We hope this will be only the first step in bringing out many such works in Indian languages. To make it possible to reconnect to our roots of languages literature and story telling.

Sabuj Dweeper Raja
Kakababu learns of some mysterious happenings in the emerald isles of the Andamans the land of the Jarowas a tribe that is very hostile to the civilized world.

There is a mysterious fire emitting rock with an unlimited source of energy perhaps a meteorite from another galaxy. The Jarowas led by their nonagerian king worship and protect this treasure. They and their artillery of poison arrows are pitted against a gang of well armed criminals that is trying to steal the rock. Kakababu and Santu arrive in the thick of this unequal fight…

Bijoynagar-er Hiray
Kakababu Santu and their friends Ranjon and Rinku a young couple from Bangalore visit this ruins of Vijayanagar the erstwhile kingdom of the Bahamani rulers. Here in the guise of shooting a historical film a gang is trying to unearth a long lost treasure the famed Vijayanagar diamond compared to it legend says the Koh=i-noor looks pale.

The bandits try kidnapping poisoning and everything else in their power to outdo Kakababu and his friends who will not let the treasure be struggled out of the country.

Ranjon Ghoshal
Theatre person musician lyricist literature and adman Ranjon Ghoshal lives in Bangalore. After starting as an engineer he founded Mareech an and agency he was part of Mohiner Ghoraguli one of the original Indian rock bands. He has created several television and ground events. Ranjon is researching the aural arts for audio books of the future.

For ease of listening the 5 hr 59 Minutes long audio books is made of approximately 15 minutes long tracks like book marking.

This CD contains the book in MP3 format and also in M4B format. M4B is an audio book format and it supports book marking. It works on most iPods.