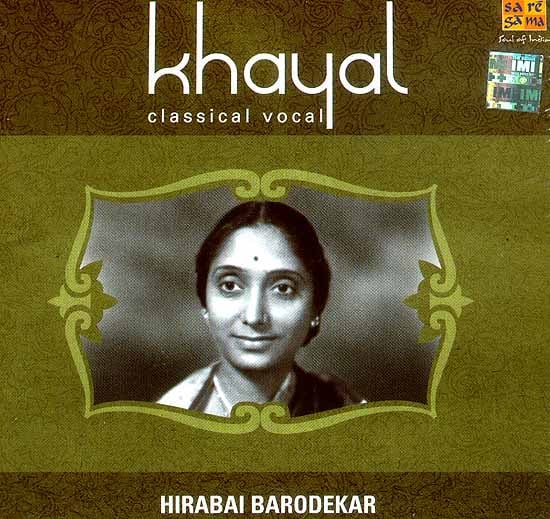 Hirabai was gifted with melodious voice. Besides classical Khayal singing she had mastery over light classical music such as Thumri, Bhajan and Marathi Natya Sangeet. She popularized Hindustani Classical Music among the masses.

Hirabai was also a fine stage actress. Her elegant features and her fine singing voice were her greatest assets. She was the first woman to appear on the professional Marathi stage. To Hirabai goes the credit for having introduced classical music in the place of light music in Marathi Natya Sangeet.

She was the recipient of the Padma Bhushan and the Sangeet Natak Akademi Awards. Dr. Prabha Atre, Saraswatibai Rane, Malati Pande, Janaki Iyer, Shaila Pandit and Suvarna Chandrashekharan are some of the talented women singers Hirabai left behind as her musical legacy.

‘Khayal’ is a contemporary popular form of Hindustani Classical Vocal Music to present a complete picture of the melodic scale called the ‘Raga’. Its genesis is the austere form called ‘Dhrupad’. ‘Khayal’ is a Persian word, meaning ‘Thought’. The genius of the creator of the Raga in combination with the performer’s improvisation, makes a ‘Khayal’.

There are two distinct compositions of the Khayal, also known as ‘Bandish’ in a performance. The ‘Vilambit’ Khayal or Bandish is sung in a slow rhythmic cycle. This is followed by the ‘Madhya Laya’ or ‘Drut’ Khyal or Bandish sung in a medium to fast tempo.

‘Khayal’ soon gained popular acceptance because of its communicative nature. Thus encouraging performers to further experiment with its style, thereby enhancing its beauty.

Hirabai Barodekar (1905-1989)
Hirabai Barodekar is one of the renowned classical artistes from Kirana gharana. Born in 1905 in Miraj, Maharashtra, Hirabai’s musical training started whilst she was still a child.