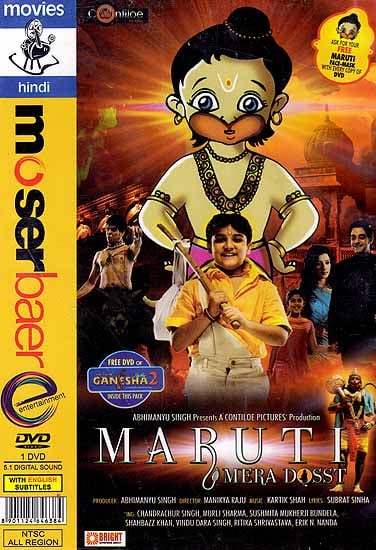 $22.00
Ships in 1-3 days
Notify me when this item is available
Save to Wishlist Send as E-card Share by Email
From the DVD

Rameshwari an innocent 8 years old loses her mother just after birth and is brought up by her dad, Kunwar Raghavendra Singh who remarries for getting her a mother. While Rameshwari’s step mom Mohini is a kind soul of sorts, her mother Kokoi is a diabolical character, a witch, whose sole aim is grabbing Raghavendra’s entire properly.

As Kokoi’s evil plans start getting troublesome for Rameshwari, the little girl seeks help from her favourite deity Lord Hanuman. Hanuman sends for her help a friend, Maruti, a small boy with magical powers. Kokoi realizes the reasons for all her nasty plans going flop is none other than Maruti. She then succeeds in creating a misunderstanding between the two kids and brings Rameshwari to a situation where she herself tells him to leave the house. Once Maruti leaves, Kokoi gets back to her devious plans.

Through many twists and turns Maruti comes back to save the day and beat the bad guys. The film is about good against evil, about the super hero “Maruti” against the evil forces that are trying to harm his biggest fan and disciple Rameshwari.
As they say no one ever calls the Lord’s name in vain!!!