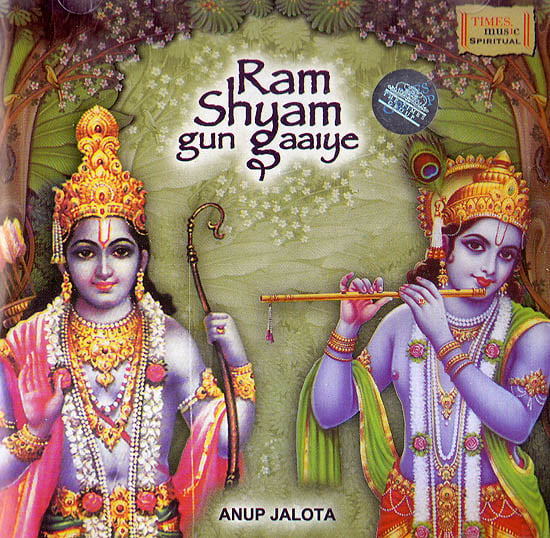 ‘Ram Shyam Gun Gaaiye’ expresses and explores the immense musical value of (rue Indian culture. This album is in praise of Lord Rama and Krishna, the conquerors of the heads, minds and faith of millions of devotees all over the world. It is the fruit of the concerted efforts of renowned poet and lyricist Kavi Narayan Agrawal ‘Narayan’ and Bhajansamrat, Shri Anup Jalota. The musical weave of soulful & philosophical lyrics and mellifluous voice are both profound and seeped in divine blessings of God. Also found in these creations is a spiritual mystic so spellbinding that one loses oneself in its depth.

And who is not familiar with Anup Jalota? Son of Bhajan exponent Purshottam Das Jalota, he hails from the Shamiana Gharana of Punjab. He has been spearheading the mission of popularizing the infinite beauty of devotional music for a long time now. A house-hold name in India, his versatility charm, grace and enchanting smile have won him admirers all over the world. He has set a world record by receiving more than hundred gold, platinum and multi-platinum discs. He has recorded more than 200 albums so fat Here is another great album from this singer par excellence.

The chanting of the names of the two incarnations of Lord Vishnu, Shri Kama and Shri Krishna, by their devotees, is said to be the elixir of a beautiful life. The bhajans explore each facet of these two omnipotent forms. Kanhaiya, the naughty child, says to his mother in “Maiya mori main nahin” that when hearts are bonded then bodies are nothing but shadows. In “Nainon ki jyoti”, “Bhakti jal mein” and “Jin ur ne Shyam”, Anup Jalota promises pleasure and salvation on submission to the Lord. In Shri Hari Gun gaana Hai he vows that chanting the name of the Nandlala can wash away all our sins. The spiritual power of chants is touched again upon in prabhuji Charna tere in Kaushalya Manhi Harshai. Shri Rama’s mother expressed great contentment at the destiny met out to her as the mother of one worshipped by all. Anup Jalota again emphasizes the power of bowing to Rama in Bhakti se Shakti here he says that devotion is that invincible force that makes all our tasks possible.

Thus life is a final flourish before the long monochrome of winder and this album establishes devotion as the key force that never lets the winter set in. so let’s embrace this ultimate joy and archive nirvana.